In the summer of 1937, in the South of France, while the Spanish civil war raged nearby, and wider conflict threatened to spread to the whole of Europe (as it would two years later with the second world war), Lee Miller met Pablo Picasso. She was an American who had started her creative life as a model for Vogue before becoming a photographer under the tutelage of her lover, Man Ray, and then taking a studio of her own. Picasso, the Spanish-born painter, had recently finished his seminal work, Guernica. Both had been friends and collaborators with the surrealistsin Paris. Both were working with Roland Penrose – who later became Miller’s husband and also Picasso’s biographer.

The photographs in this exhibition at the Scottish National Portrait Gallery are, of course, about more than Miller and Picasso – and Penrose, along with other friends and artists, figures highly in the list of subjects. Miller and Picasso’s world was a movable feast, if a rationed one, during a wartime in which their group would lose people, as well as food on the table. And yet they were persistent. These photographs bear witness to a beautiful friendship, and, in so doing, show the many ways in which these individuals (and their relationships) continued over such a difficult time. One photograph shows Picasso in front of a tomato plant that he grew himself, and a painting of it. Another brilliantly touching shot shows Miller and Picasso after the liberation of Paris, with Picasso fondly putting his hand around Miller’s shoulder, almost cradling her head, while Miller stands tall and proud, with her hand on his shoulder. Miller had been working as a war photographer at the time, arriving in Paris the day after its liberation and finding herself near the painter’s studio. As Picasso said at the time: “This is incredible! The first allied soldier I should see is a woman and it is you!”1

Miller was, by all accounts, a remarkable person, and in those days all the more so for being so adventurous and independent while being a woman (and a glamorous one, at that). Picasso was taken with her, not only at their first encounter before the war, but at the many meetings thereafter. A painter quite used to going through his muses, this relationship was rather different: Miller was a photographer as well as a model, and while he produced six works of art inspired by her, Miller produced more than 1,000 photographs of Picasso during the 30 years they were friends.

More than 100 of those images are exhibited in the Scottish National Portrait Gallery this summer, accompanied by two of Picasso’s works, notably his 1937 portrait of Miller, a vivacious painting of soft pink, warm yellow and an almost turquoise blue – colours, in fact, of the French Riviera at the time they met and he painted this. The exhibition is intriguing and joyful, and touching for its subtle recording of love and friendship and pleasure in otherwise difficult times. The moments of beauty, of which there are many, are plucked from wartime, in between illnesses and anguish, in between broken marriages and personal struggles. When she was not photographing Picasso with his grandchild, or their friends sunbathing in Provence, or idyllic embraces, Miller was documenting the survivors of the Holocaust (and those who perished), or the remnants of Hitler’s apartment following his death, or rubble-strewn Paris, weakened in spite of its liberation. Knowing the background to Miller and Picasso’s relationship only makes the moments of happiness and camaraderie all the more poignant.

Miller’s photographs, as well as being part of this pas de deux with Picasso, were also a collaboration with their mutual friend Penrose. He was a British artist, collector, and friend of the surrealists, who was also writing a biography of Picasso, and it was he who introduced Miller and Picasso in France. So these photographs were more than an expression of Miller’s love of Picasso; they were also a conversation with Penrose, a project between these two. While the photographs tend to feature Picasso more often than not, Penrose is in the background throughout, involved in their story.

And it was a long story. Picasso was known for going through a number of rather brief encounters with women, and Miller, too, would travel the world in search of pictures and people, not one to settle for the sake of it. And yet their friendship lasted until their deaths – keeping their wider group intact in some sense, and surely the conversation of ideas and certain shared values and friendships. From that initial meeting in France in 1937, to meeting again as Paris was liberated; from Picasso’s studio in Paris in the 50s to his more relaxed homes in Vallauris, Cannes and Mougins later on, Miller photographed Picasso as he worked and worked and sometimes relaxed. Her photographs record his accomplishments, his paintings, crowded around the painter as he lets his work happily take over his life. In Picasso with La Coiffure, Villa La Californie, France (1956), the artist crouches in the centre of a grand room, surrounded by three canvases; his expression one of intensity and pride, of course, but also a sense of peace. Here is someone taking absolute joy in his work.

In that spirit and pride, Miller had a real ally. Their work ethic was about far more than stoicism, a kind that characterised their generation particularly; it was also a rare sort of hedonism – a disciplined hedonism that found true peace and camaraderie in working on art, and working with each other. Miller documented not only Picasso’s relationship with his own work, but also her relationship with work, and the ways in which that shared passion gave their friendship a special longevity and character. While Picasso is known for his private life as a womaniser and hedonist, here we see the artist as an artist, with other artists, one of them a woman. We see something that looks much like a relationship of equals, and a determination, at least on Miller’s part, to make that last. While the camera can lie, and all photographs are subjective, here at least is a collection of photographs that shows the best of friendships, one based on equality and mutual respect.

1. Art review: Lee Miller and Picasso, Edinburgh by Duncan Macmillanin the Scotsman, 30 May 2015. 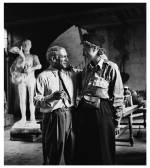 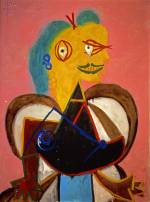 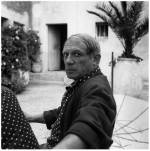 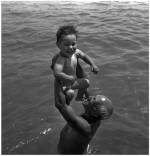 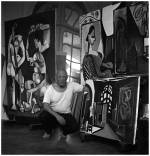