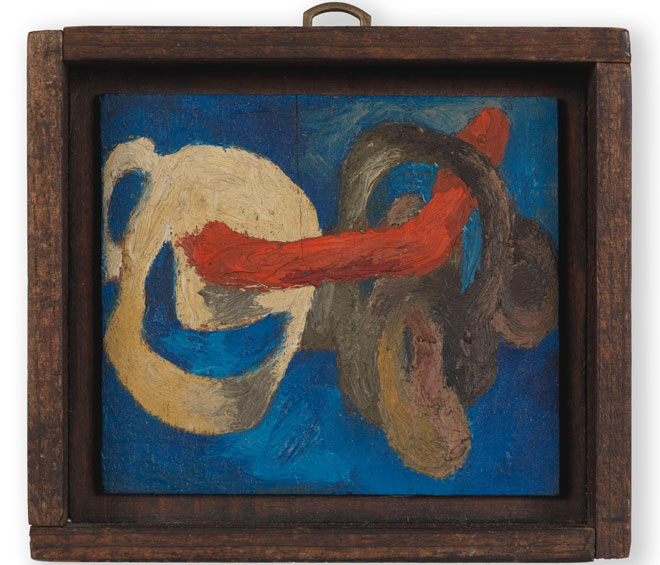 It is rare to see a coffee mug smile, but this one positively beams, its lips done up in poison green. Above, something equally unexpected protrudes: the fleshy bulk of an erect penis, emerging from the glossy white of the vessel. Body parts tangle with inanimate object to form a bizarre, unsettling hybrid. Such juxtapositions abound in the work of the American artist Lee Lozano (1930-99). The same mug with the same lips returns in another painting, only this time the mouth is agape, there are crucifixes on the mug’s “head” and the penis punches out like the nose of some porcelain Pinocchio.

This exhibition at Hauser & Wirth London, c 1962, collects 27 pieces from Lozano’s early series of oil paintings. Each piece is untitled and diminutive in size. In shape, they range from squares to frieze-like panels. Some are painted on wood, some on canvas and some on plywood, and many are roughly bounded with a thick wooden frame. All depict some combination of household objects and human organs. A phallic fighter jet swoops over an androgynous face, a little too close for comfort; mugs become grimacing theatre masks penetrated by black, red, white and brown members. In several works, a toothy disembodied maw, sometimes with fangs, smirks out of the gloom: a loan from the realm of gothic horror. Lozano’s subject matter is comparable with the organic, globular cartoon world of the late Philip Guston – also currently exhibited in Hauser & Wirth London – and her frenzied, clotted brushstrokes take one back to the sloshes of postwar action painting. But Lozano stirs menace and sensuality into a nightmarish stew of her own.

You might surmise from these early works that Lozano is what is commonly described as a “troubled” artist. Indeed, in that, she was paradigmatic. Arriving in New York in 1960 after a conventional period of study at the Art Institute of Chicago and a failed marriage, Lozano swiftly joined the SoHo scene centred around Richard Bellamy’s short-lived Green Gallery and practitioners such as Donald Judd, Sol LeWitt and Carl Andre. The paintings in c 1962 constitute the first stage of her mature career; midway through the decade in which she switched to minimalism. Her Waves, a series of paintings modelled on electromagnetic waves, were painstakingly created in sessions that could last several exhausting days – a different type of extremism to that displayed in her genitalia-filled miniatures.

By 1968, Lozano had started to become disillusioned with the art industry, and switched to conceptual work that critiqued or disregarded it. One piece saw her throw the previous 10 issues of Artforum in the air, while another involved her listening to a radio during a panel discussion. She also pushed her health to the limits: one enactment saw her spend a month ingesting a tab of LSD each day. Her final opuses, written as ideas in her notebook, were Decide to Boycott Women (1971) and Dropout Piece (conceived 1970, enacted 1972). For the former, she spent a month – later upgraded to a lifetime – refusing any interaction with females, while for the latter she fled the art community altogether. She eventually moved to her parents’ house in Dallas, and only re-emerged in 1998, when she gave permission for a clutch of exhibitions.

Since her death from cervical cancer the following year, there has been a steady stream of surveys, including an enormous 250-work retrospective at the Kunsthalle Basel in 2006, curated by Documenta 14 director Adam Szymczyk. This summer, another show opens at Madrid’s prestigious Reina Sofia. Hauser & Wirth, which is responsible for Lozano’s estate, has hosted four Lozano exhibitions since 2007; c 1962 is the fifth, and was previously presented at New York’s Karma last November.

Much attention has been bestowed on the drama of her life. Alanna Heiss, founder of PS1, for example, cast Lozano as a victim, claiming in a New York Times article in 2011 that: “Lee was cruelly caught in the space between art and madness.” Such diagnoses, even coming from a friendly acquaintance such as Heiss, rob Lozano of her deliberation and agency: qualities that rise to the foreground in c 1962.

Lozano was a reader of the Frankfurt School theorist Herbert Marcuse, who, in his 1955 book Eros and Civilization, posited sexual drive as a liberating force with the ability to positively affect society. As unnerving as Lozano’s paintings appear to be, they also present a sort of emancipation in allowing taboo organs to interact with banal household items; Lozano’s next painting and drawing series, Tools (1963), was to make this more explicitly violent, transforming hammers, spanners and screwdrivers into suggestive toys. This propensity for objects to become something else also allies Lozano with the French philosopher of eroticism Georges Bataille, whose sensational novel Story of the Eye (1928) melds ecstasy with extreme perversity, and frequently depicts body parts linguistically metamorphosing into others. In Lozano’s paintings, anything can slip into the sexual.

By painting suggestive forms drawn from both female and male bodies, Lozano denies the western tradition’s hierarchies of gender. Man and woman are equalised in their potential for the amatory, something that contrasts with the misogyny implicit in her later boycott. The minuscule scale of these works, too, has purpose beyond economic expediency. It evokes early modern portrait miniatures, which travellers carried as an intimate reminder of their partners, as well as the 18th-century pornographic miniatures used to stimulate sexual arousal. By forcing one to scrutinise closely, the form draws one into Lozano’s domain while distancing it from the outside world: this is a place where you have to strain to comprehend clearly. Yet despite this peep show aspect, the tangle of protrusions and orifices is not voyeuristic. We are not being given a sneak at the forbidden. Instead, the forbidden is leering out at us, often with lips and teeth.

These paintings are by no measure masterpieces. But in their unashamed eroticism, barbed surrealism and strange sexual honesty, they are much more than curiosities. Lozano’s belated re-emergence, and Hauser & Wirth’s consistent promotion of her work, is something to be thankful for. This is a dark, twisted fantasy worth exploring. 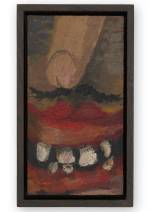 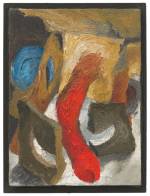 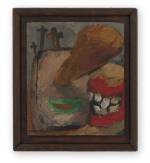