In two powerful sets of new work at Hauser & Wirth’s Somerset outpost, the Belgian sculptor moves beyond her figurative past in an attempt to capture the tragedy of the present day 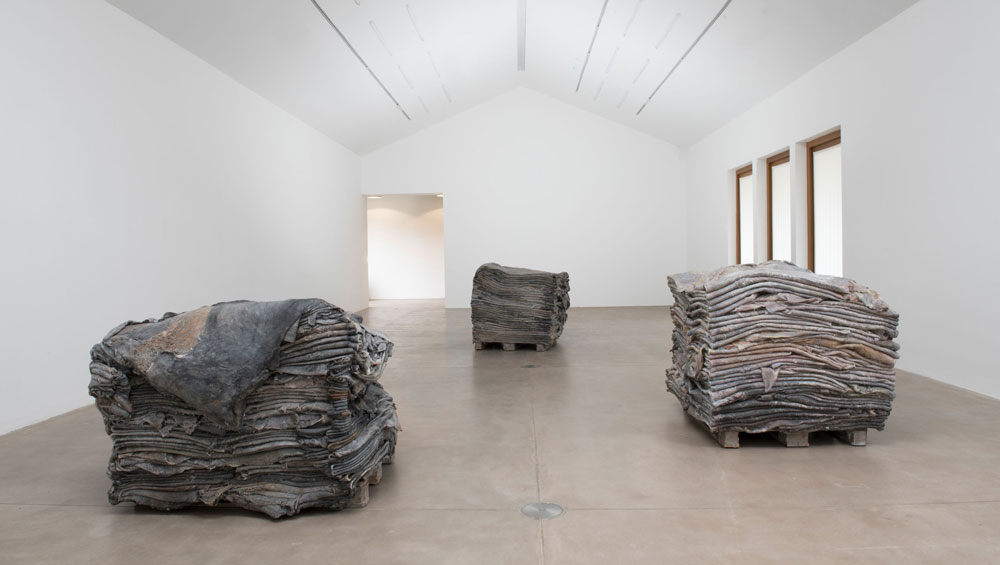 The Flemish artist Berlinde de Bruyckere (b1964, Ghent) makes art with a presence. Her sculptures have a rare propensity to astound you into silence. “Each physical encounter with your work”, wrote the curator Philippe van Cauteren in a 2014 letter to De Bruyckere, “strikes me dumb; words and sentences degenerate into meaningless noises compared with your charged imagery.” 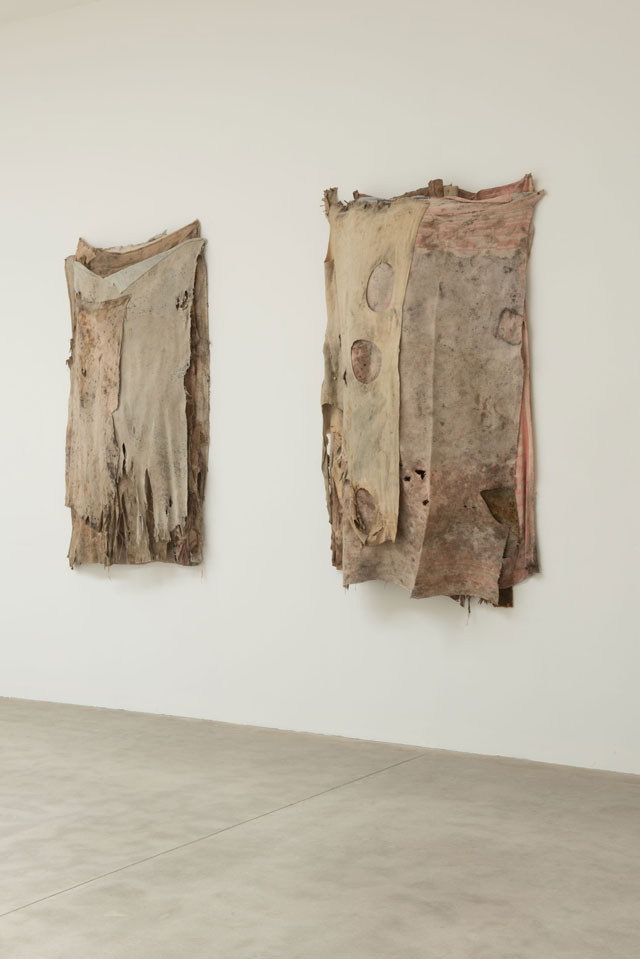 Since De Bruyckere began to practise in the late-1980s, this imagery has come to include blotchy fragments of human bodies, headless and snuggling into blankets or shrouded by their own, overgrown hair; plastercasts of horses covered in hide, placed upturned on trolleys in agonised, dance-like poses; and skin and bone metamorphosing, Daphne-like, into wiry rivulets of sticky, pinkish branches. Evading the potential for such works to tilt towards horror-show kitsch, De Bruyckere’s art balances debasement with an uncanny grace and dignity. “Beauty, loss, death, consolation, hope, life and pain,” Van Cauteren’s letter continues, “are some of the universals inscribed on your sculptures’ skin.” On to these universals, the viewer is able to inscribe some of the barbarities of recent times, from torture at Guantánamo Bay to the refugee crisis. By restoring physicality to scenes of suffering, De Bruyckere restores our ability to be affected by them, contravening the desensitising effect of contemporary media. 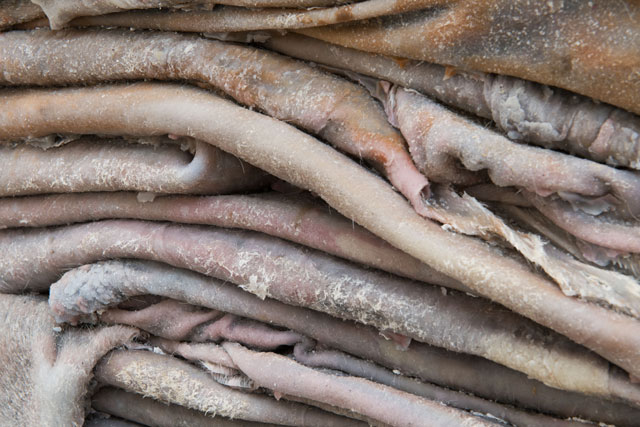 Stages & Tales, an exhibition of new work at Hauser & Wirth Somerset, represents both a break with, and an extension of, the artist’s previous practice. It presents two groupings of pieces, each taking familiar De Bruyckere tropes – blankets, animal skin, painted wax – but assembling them without the figurative sculpture that has often stood at the centre of her work. This shift began with Penthesilea (2014), a set of works cast from the flayed skin of horses. There, however, the sculptures’ forms conveyed the animal that was absent. In Stages & Tales, there is no such anchor. “Bodies,” De Bruyckere said, by way of introducing the exhibition, “are no longer enough to talk about the tragedies of the world today.” 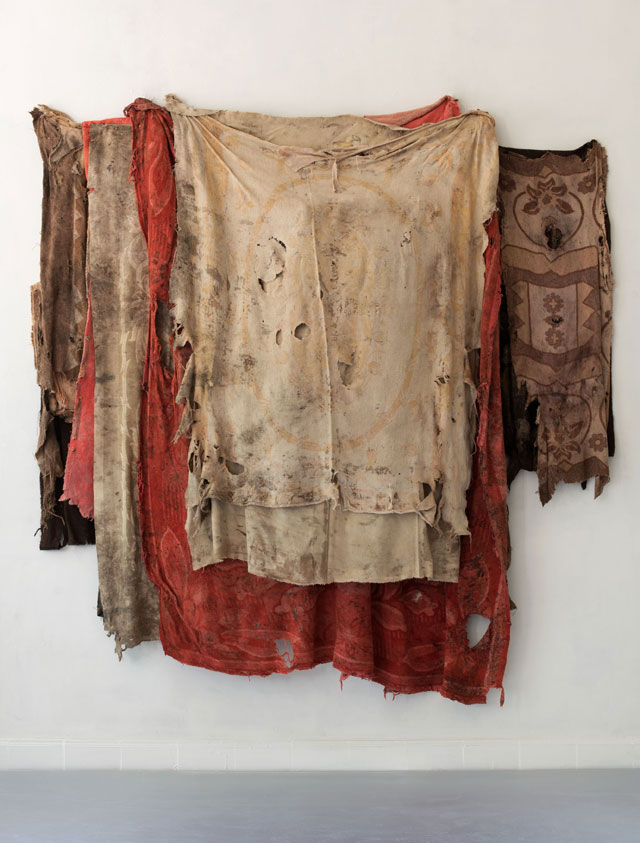 The first series, Courtyard Tales (2017-18), features blankets, which De Bruyckere has consistently used to signify shelter and security, as well as to summon the spectre of those occasions in which such protections are required. De Bruyckere took dozens of secondhand blankets and placed them in her courtyard garden for more than a year, allowing them to fade and degrade. Sorting them into sections based on their material, patterns and hue, she then layered them atop each other, creating mouldering piles of matter, and hung them against the wall. 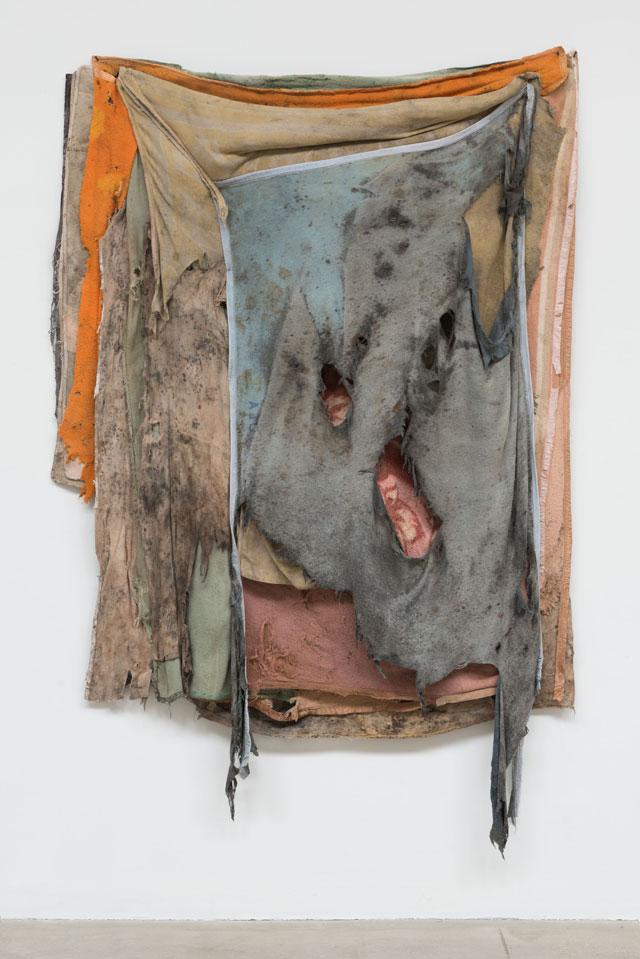 To call these works ragged would be an understatement. De Bruyckere’s blankets are riddled with rips and tears, scattered with pockmarks and punctures, scarred and discoloured until their artificial dyes begin to acquire an almost organic palette. I am unlikely to be the only visitor who leaned up close and attempted to discern a scent, or who speculated as to whether there was life lingering within (thankfully not: the blankets were subjected to a deep cleanse before the show). In one case, a clump of fabric hints at a human form hidden inside. Although the immediate effect is less visceral than the artist’s earlier work, it is no less uneasy. The blanket, once a symbol of security, now lies flea-bitten and useless. The disintegration of De Bruyckere’s textiles quietly suggests the disintegration of the postwar western social fabric, without ever explicitly pointing a finger. I was left overwhelmed by the silent, intimate stories that each individual sheet could tell.

De Bruyckere has always conversed with the fleshier ends of art history, from the gory martyrdoms of the Northern Renaissance to Zurbarán’s trussed-up Lamb of God. Courtyard Tales continues this engagement, albeit less overtly. In their roughly rectangular forms, hung up on walls, they recall paintings. One work has the rough form of a triptych, rendered in flesh-and-blood colours; another two hang together like diptych portraits of a husband and wife. Visible nails protrude from various pieces of blanket, immediately calling to mind Christ on the cross. And there is a painterly approach to the way De Bruyckere layers the blankets, with apertures revealing different shades and patterns blending and colliding. 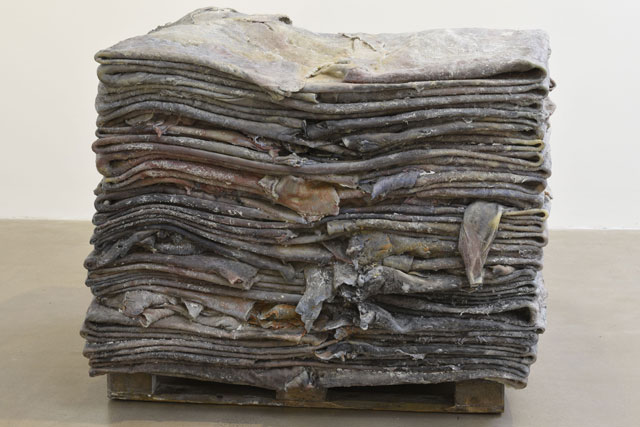 The second series, Anderlecht (2018), is equally painterly, although more difficult to slot into De Bruyckere’s art-historical schema. Named after a district of Brussels traditionally home to slaughterhouses, it was inspired by a 2014 visit to a cattle hide-salting workshop. “The smell of freshly slaughtered animals,” the artist said at the time, “the salt on the ground mingling with blood into a wet slush … I was unable to avert my eyes … Never have I experienced death and life as intensely as I did there.” 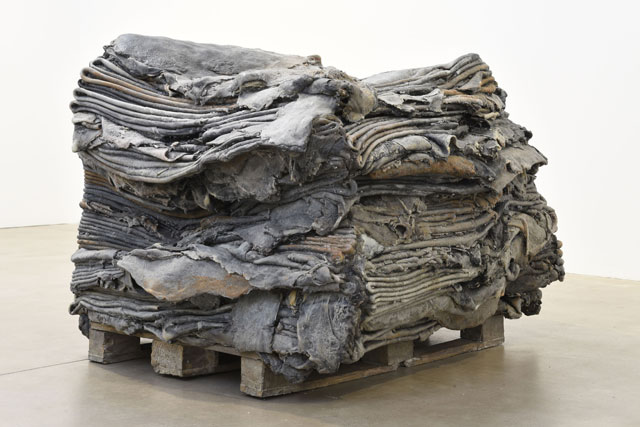 If Anderlecht is quiet compared to that chaos, it still possesses a forceful presence, almost akin to that of a living thing. It encompasses three cube-shaped sculptures that resemble piles of folded-up animal skin. Replete with hairs, flecks of skin and grains of salt, they are uncannily realistic. Only on closer inspection do we see that they are sculpted from wax, which was itself created using silicone moulds of the skin. Although grey in overall palette each layer has been coloured with muted but polychromatic paints, creating a rich patina. I could have stared at their surfaces for hours, puzzling over their tussle between animal and artifice: like Van Cauteren, I was lost for words at their strange splendour.

The abattoir has claimed the cattle, but De Bruyckere has transformed their traces into a curious new type of life. “We are always trying,” says the artist in a video explaining the show, “to escape from death, and I hope my work can open some dialogue … We don’t have to escape from it.” Here, in the beautiful raiments of the dead, De Bruyckere’s practice contains a sort of consolation, if one that can only emerge in the aftermath of suffering. Stages & Tales is a powerful next step in the artist’s exploration of these conflicting states.