A major figure on the New York art scene of the 1960s and early 70s, Lozano is not so well known these days. This new exhibition at the Fruitmarket Gallery in Edinburgh – featuring expressive and fascinating paintings, drawings and ‘language pieces’ – aims to change that 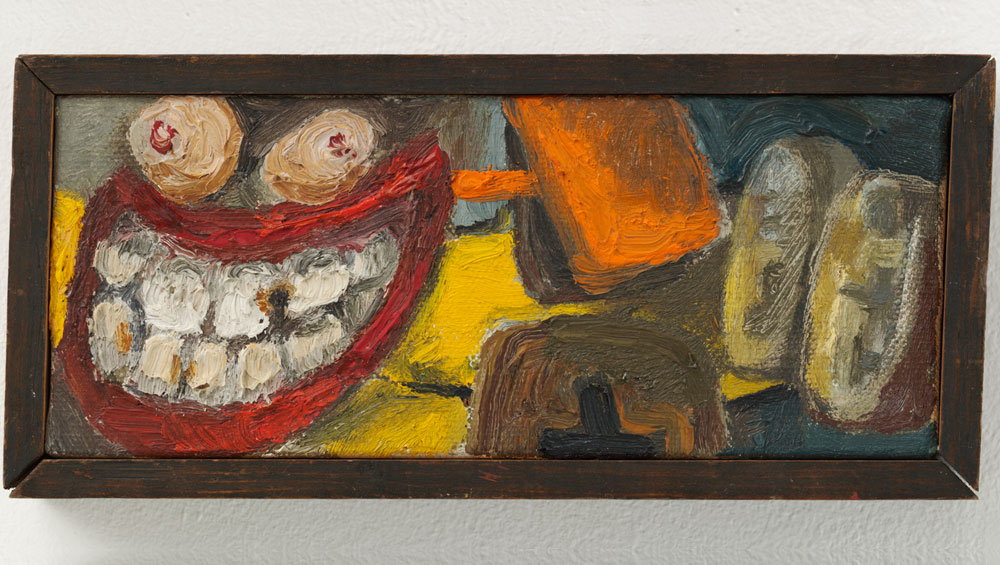 Spread over two galleries on two levels, Slip, Slide, Splice is a comprehensive and satisfying exhibition, giving not only a good impression of the work and concerns of the American painter Lee Lozano (1930-99), but also providing a varied and interesting visual experience. In the ground floor gallery, the exhibition is split into two: the main room houses drawings and small paintings, while the second, smaller room contains her “language pieces” – A4 sheets of lined paper with her linguistic experiments written out. 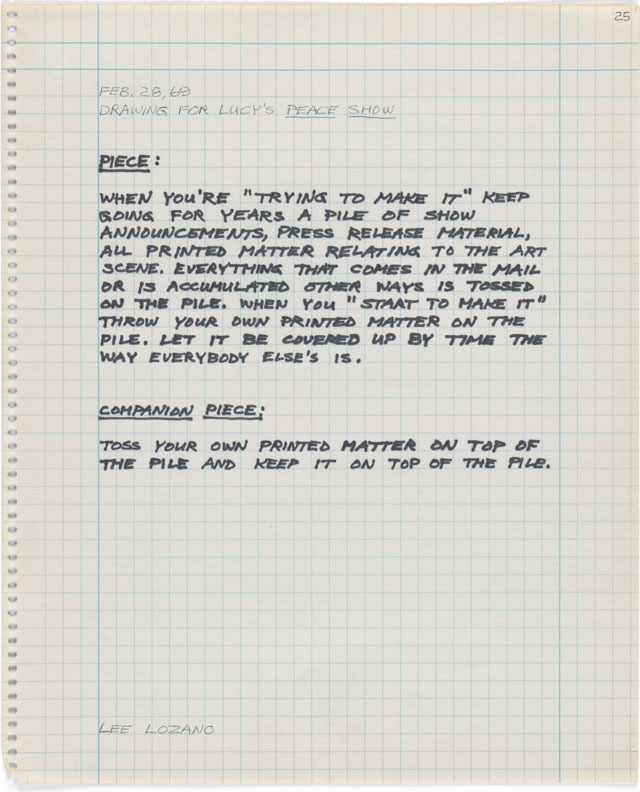 The drawings and small paintings were mainly produced in 1962, when Lozano was in her early 30s and a recent graduate of the Art Institute of Chicago (before that, she had gained a degree in natural sciences and philosophy from the University of Chicago, which clearly influenced her more linguistic works, especially). The drawings and paintings (all of which are untitled) are irreverent and experimental, playing with forms and ideas related to sexuality and the everyday. As the exhibition’s title suggests, these works combine unusual and seemingly unrelated images – “splicing” things together to form new ideas that are surrealist and subversive in essence. As Fruitmarket director Fiona Bradley writes in the catalogue that accompanies the exhibition: “Tiny paintings and drawings explode with a transgressive, metamorphic, sexual energy … reminiscent of the surrealists as Lozano develops a pictorial vocabulary which zooms in again and again on a particular repertoire of forms and shapes which morph into one another within a painting and from painting to painting. Mouths, ears and sexual orifices; and fingers, aeroplanes, noses and phalluses jostle one another for space and dominance as Lozano creates a world of ambiguously sexual materiality, a vaguely nightmarish dreamscape in which everything is always potentially something else.” 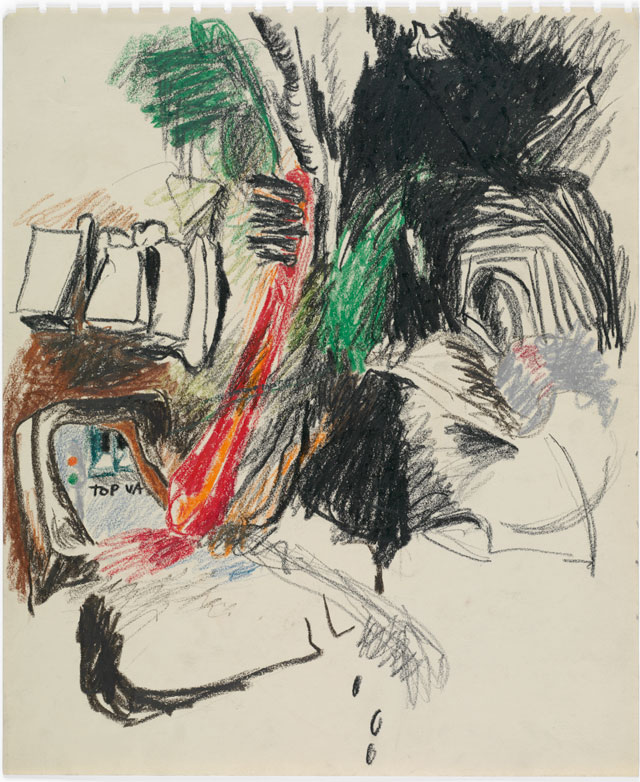 This sense of playful, sometimes menacing chaos imbues each group of work in the exhibition, and yet the overwhelming atmosphere is calm and ordered. While some surrealist and dadaist work can verge on the nihilistic with its dissonance, Lozano’s work transmits a sense of completeness and self-awareness that somehow avoids this.

Her conceptual language pieces, for instance, take the form of instructions: while such an approach could easily be jarring and anxiety-inducing, she manages to inject a sense of folly and light-heartedness – perhaps due to the inherent futility of these lists and transient orders. 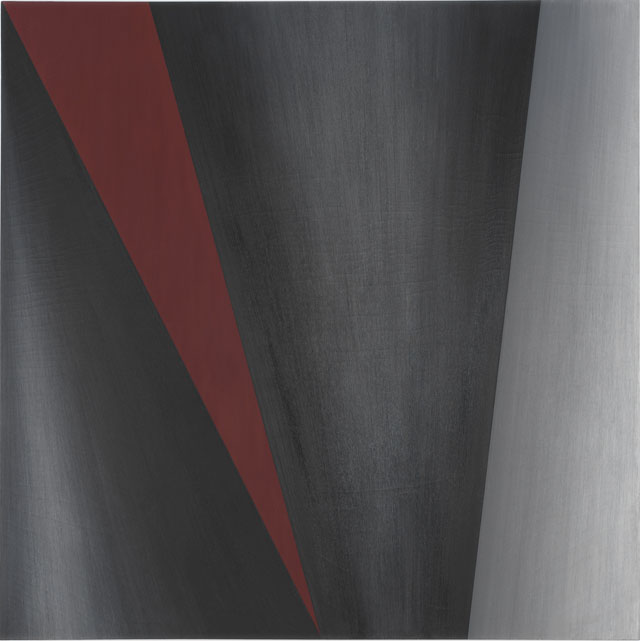 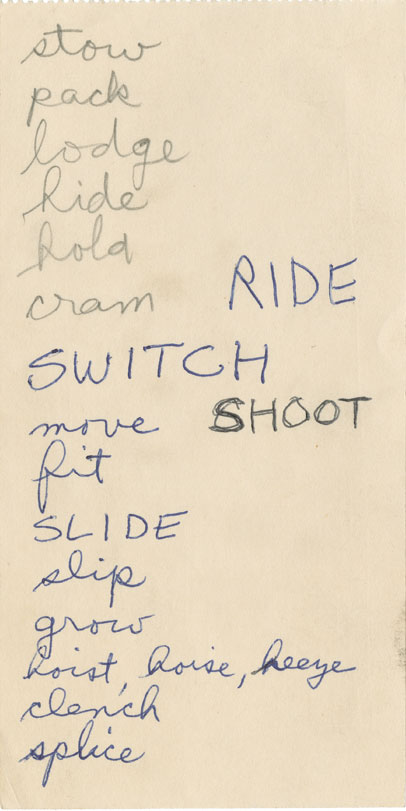 In her small canvases, while the palette of dark blues, reds and browns may be ominous and threatening, the small scale and seemingly slapdash painting reduces any anxiety, even diminishing it entirely, so that these amorphous fears or dissonances are overcome by her treatment of them.

Upstairs, meanwhile, where the paintings are on a far larger scale, the colours are warmer and the paintwork gives an impression of flatness; whatever violence the images of blown-up tools may suggest, Lozano again reduces with the absurdity of their size and the abstraction of their forms. Across her work, therefore, Lozano confronts ambiguous threats and dangers, and then overcomes them inventively and masterfully.

It is significant, too, that her work is intentionally “complete” in a certain way, which is unusual among her contemporaries and, indeed, artists in general, in that she chose when her output would end. In her final conceptual artwork, Dropout Piece, Lozano left New York and its art scene entirely. This work was the imposition of her own detachment from “art” itself, in a deliberate statement that has the effect, overall (and in hindsight) of undermining the existential angst that her work might otherwise affect.

The language piece that preceded this final work, and which is displayed in the smaller room of the exhibition, and in many ways marks the end of the experience of it, has a similar effect. Titled, General Strike Piece (“gradually but determinedly avoid being present at official or public ‘uptown’ functions or gatherings related to the ‘art world’ …”), this conceptual piece is a rejection of the art world and in particular its narcissistic, egotistical and elitist characteristics. By demanding her own rebellion, or rather recording it in these lists to herself, she provides an alcove from the jarring aspects of the contemporary art world, and a way, following her own example, of deciding one’s own fate rather than mindlessly submitting to it. 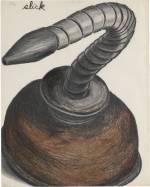