Klara Lidén: The Myth of Progress

Klara Lidén: The Myth of Progress

Within the myriad forms of political art, it is possible to discern two primary strands. The first is the direct visceral route; the art of, to borrow just one place and time period, Georg Grosz, Otto Dix, Hannah Höch and John Heartfield. The second is to approach a subject from a much more oblique direction and with a more concealed intent; to cite two musical examples, Bertolt Brecht and Kurt Weill’s The Ballad of the Soldier’s Wife or Elvis Costello and Clive Langer’s Shipbuilding.

The method employed depends not only on the artist’s preference, but on the message they are conveying and, crucially, the opposition they are facing. This resistance may come not just from their opponents, but from an audience sceptical of dogma or claims of rebellion. For the socially conscious artist, it is a choice between storming the gates and constructing a Trojan horse on the shore. The thought-provoking, playful but disruptive work of Klara Lidén, as evidenced in The Myth of Progress, is a fine example of the latter.

At first, the political aspect of Lidén’s work is easy to miss. What, after all, could be political about photographs of figures shimmying up lampposts or video footage of the artist moonwalking? Yet to make such an assumption would be a confirmation of one of Lidén’s central points; ideology is everywhere and, though we may be blind to it, it is not blind to us. Her intentions are relatively covert because they mirror the pernicious and imperceptible ways that market, governmental and societal forces act on us. The methods with which she achieves this awareness in the viewer may be less subtle, but they still skilfully recontextualise the environment and our relationship to it in a way that we may barely notice.

“We inhabit the megalopolis only to the extent that we declare it uninhabitable,” Jean-François Lyotard wrote in The Inhuman: Reflections on Time. “Otherwise we are just lodged there.” It is a view that The Myth of Progress seems to confirm. Yet there is a commendably subversive streak in Lidén’s art that defies the pessimism that might accompany such a perspective. With its focus on liminal urban settings, her photographic series within the exhibition suggests that we have built environments around us where paradoxically humans do not fit. In Bowery (2012), a figure has climbed on to a street sign at an intersection; recalling the ghosts of the medieval damned said to be trapped for all eternity at crossroads. Rather than lapse into purgatorial despair, however, Lidén demonstrates that we can resist through small imaginative acts of revolt, or at least express our alienation. She does this with real humour; raising the question with Column Monkey (2013), if this is a concrete jungle, then why not approach it as a simian would? For all the comic effect, there is a distinct note of danger in the photographs. A person who ascended dilapidated structures or descended into manholes (Down, 2011) would soon incur public ridicule and the attention of the authorities, as well as the possibility of coming to physical harm. We may live in the city but we are forbidden from truly exploring it; bringing us back to Lyotard’s very pertinent distinction.

The balance and contrast between levity and gravity continues in Lidén’s video installation Der Mythos des Fortschritts (Moonwalk) [The Myth of Progress (Moonwalk], 2008). Lidén is shown moonwalking through the streets of Manhattan at nighttime. While the movement is vaguely ludicrous, given its pop culture connotations, the setting is not. It may not quite be an inherently sinister location, but there is the hint of menace that anybody, particularly a woman, might feel walking through a city after dark. In such a setting, anyone might appear to be a suspect (by whom and why are additional questions). The slightly jarring nature of the piece is emphasised by the soundtrack, which, in contrast to the jazz or disco music usually associated with the moonwalk, is made up of a hypnotic but unnerving pulsing piano loop by the Swedish act Tvillingarna. The effect is one of claustrophobia even though (or especially though) it is set outside. With a unique Dublin work (Merchants Arch, 2013), Lidén continues the ambiguity, portraying a figure upside down in a bin, the consequence of some slapstick farce or an earlier assault perhaps. As with Monkey (2010), the view appears as if it is taken from a security camera. It is as if the world is being made to close in, yet we are denied even the solace of introversion. Any attempt at individuality or real interaction with the surroundings will have stern and immediate consequences. Critically, these are unspoken warnings, existing already in our own heads. Where it leaves us is evident in Pier (2012), where a figure stands marooned on a ruined column, stranded by the tide.

Lidén is a master at exploring intersections; lightness and gravitas, humour and fear, public and private (in both senses of the latter word). Her work reflects this by flitting back and forth across the boundaries between art forms; demonstrating that photography, film, conceptual art and performance are not as exclusive as they would seem. In doing so, she explores not just physical spaces but the enforced effect of restlessness and rootlessness on the modern individual. Perhaps the most impressive section of this relatively small but absorbing exhibition is her series of Untitled Poster Paintings (2007-2013). Lidén has built up layers of posters torn from the streets of Berlin, until they take on a new identity. With each poster marking an untold event, each work becomes an archaeology of lost time. They suggest ruin and impermanence (after all, these were once objects of art too). The top layer of each piece has been painted white; an attempt at finality or the suggestion of endless repetition, blank until the perpetual next. The posters may invite us to delve, to peel away the layers, reawaken the strata of memories they represent, but this is an impossibility. Instead, in reality, the peeling away and the seeing within is precisely, Lidén implies, what advertising and our willing erosion of our privacy does to us.

The title of The Myth of Progresswas inspired by an essay by the Scandinavian pessimist philosopher Georg Henrik von Wright. In Lidén’s interpretation, however, there is hope. It lays in regaining our status as individuals over our environment if we have the nerve. The Poster Paintings may chart a history of discarded waste, as much of Lidén’s work does (Benign, 2004, for example), but likewise it creates something new from found objects, something with the prospect of mystery restored. Even the figure lost on the pier might be interpreted as making a stand, a stolen (or rather stolen back) symbol of defiance in spite of everything. Lidén is dancing in the face of ridicule (as she did in her earlier subway piece Paralyzed, 2003) but she is dancing still – just as the climbers are still climbing in opposition to silent threats and coercions, whether inner or outer.

A trained architect, Lidén is acutely aware that the city should be made to serve us and not vice versa. To begin to make it do so, we must see it and ourselves afresh through what Guy Debord called “renovated cartography”: a city defined by what we make it rather than dictated by work and commerce. It requires a spirit of adventure and imagination. Years earlier, Lidén constructed a bunker on the banks of the Spree river, which had a certain magic to it as well as being a utilitarian retreat and place of shelter and solitude. Now, she has moved on, to see that escape can also come through a re-engagement with the world on our own terms, an opening up of spaces where the individual might still be sovereign. We might join her if we dare. 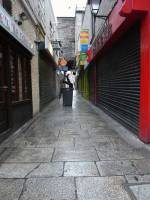