Mammen wanted to be “a pair of eyes, walking through the world unseen, only to be able to see others”. This retrospective, although stretching beyond the best period of her observational work in the Berlin of the 20s, offers visitors a chance to see through her eyes

Outside the sphere of art historians, Gertrud Johanna Louise Mammen, known as Jeanne, is not a well-known name – not in Germany and certainly not in the rest of the world. Yet her output was prodigious, as the current retrospective at the Berlinische Galerie amply demonstrates. She was born in Germany in 1890, but her family moved to Paris where she enjoyed a carefree and progressive upbringing (including art studies at the Académie Julian, as well as at the Académie Royale des Beaux-Arts in Brussels). In 1914, she returned to Germany and, from 1919, worked from a small fourth-floor, two-room living-quarters-cum-studio at Kurfürstendamm 29 in Berlin for more than 60 years, until her death in 1976. 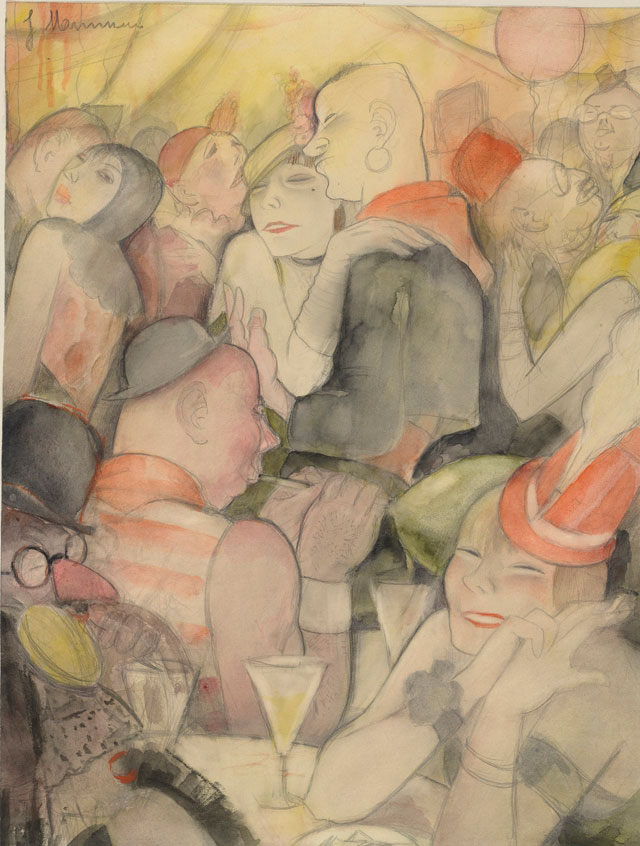 During her lifetime, she gained a reputation beyond Berlin as a chronicler of life in the city, providing for herself largely by designing film posters for the then booming UFA studios and selling her illustrations to fashion and satirical magazines, including Simplicissimus, Uhu and Jugend. Especially during the 20s and 30s, when out and about, she was never without her sketchbook – several of which are included in the exhibition – capturing the goings-on in cafes, bars and on the streets. 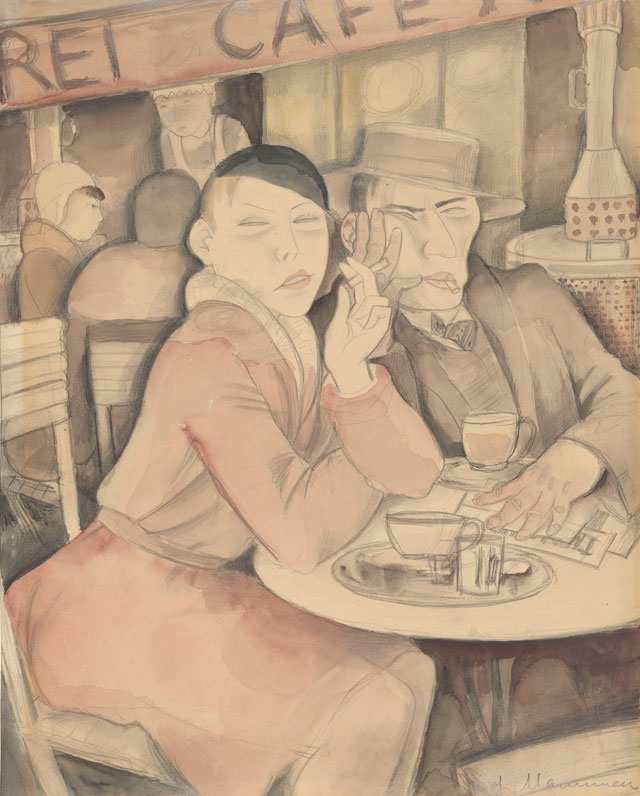 Her graphic work from this era might be likened to the new objectivity of Otto Dix or George Grosz, but whereas their works tend towards the satirical, with an underlying political critique, expressing pity or disdain for their subjects, Mammen’s drawings and watercolours, while still often employing grimace and caricature, are far more empathetic and, dare I say it, feminine, imbued with emotion, both of her own, as onlooker, and of the relationships between those depicted. The titles are often almost conversational, as, for example, You Have Beautiful Hands (c1929), depicting a chatty scene at a manicurist. 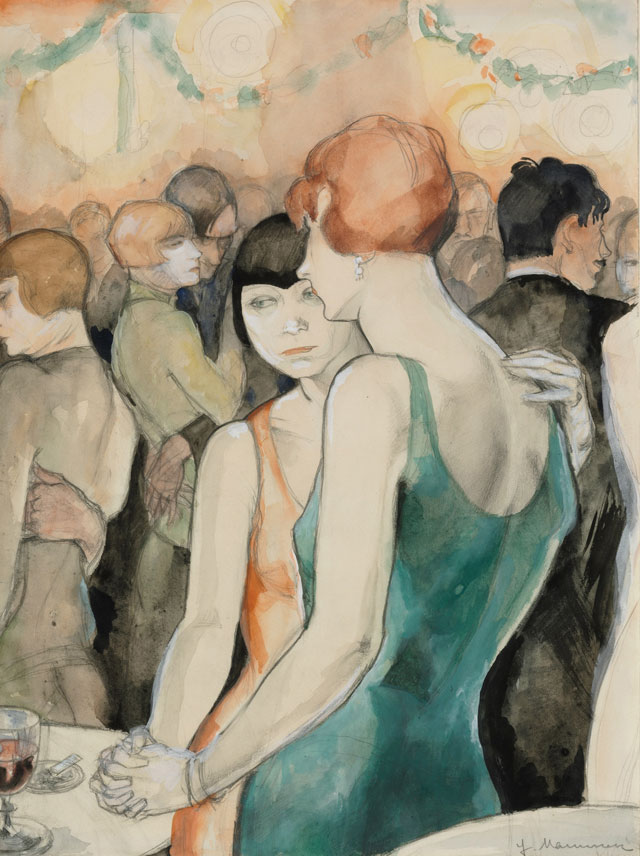 In her early years in Berlin, Mammen lived with her sister Mimi. She was close friends with Hans Uhlmann, later visiting him in prison, following his arrest for distributing flyers in 1933, and some posit more than a friendship between the two artists; others, however, in particular the scholar Laurel Lampela, suppose that Mammen may have been more attracted to women, arguing that such intimate and tender paintings of lesbian couples could only have been made from experience. 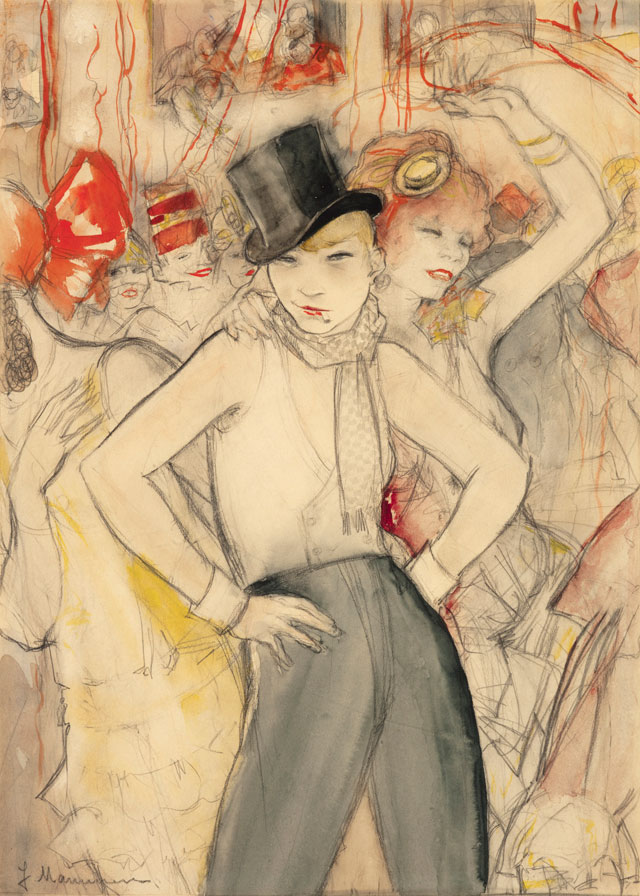 Whatever the case, Mammen often withdrew from the world entirely, with repeated periods of isolation. She survived the years of dictatorship from 1933-45 with the help of friends and mini-commissions, as well as by selling used books from a handcart. Although she had the opportunity to seek exile abroad, she did not want to start afresh for a second time in a foreign country. Instead, she lived the life of a recluse, working by candlelight after her building had been bombed, and often scarcely leaving her studio for days at a time. When she did, she noted (in the only interview she ever gave, carried out a year before her death): “I have always wanted to be just a pair of eyes, walking through the world unseen, only to be able to see others.” 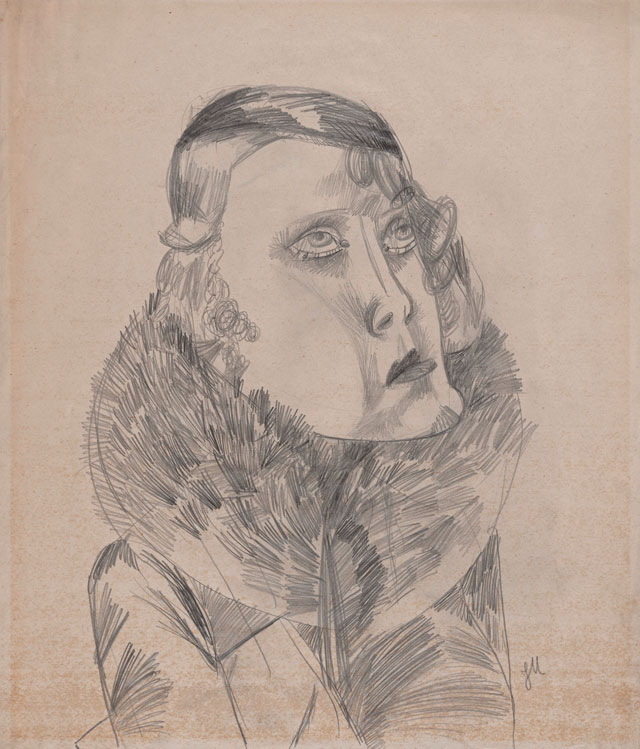 This retrospective exhibition opens with her illustrations and drawings and, for me, these remain the highlight. She drew the ideal female types and modern women of the 20s: the glamorous vamp and the diva; the flapper – art deco-style figures with bobbed hair, pale makeup and small red mouths; dark-eyed redheads with beauty spots. She captured the expanding metropolis of Berlin in the golden 20s, with its theatres, cabarets and a flourishing lesbian subculture of “ladies’ clubs”. The vibrant red in She Represents (1927)captures the heat and excitement of one such club, where the main couple act out the butch-femme dynamic, commonplace at such homosocial events. There is a real sense of the music, the smoke, the drink, the dance – and no doubt the gossip and the bitchiness. 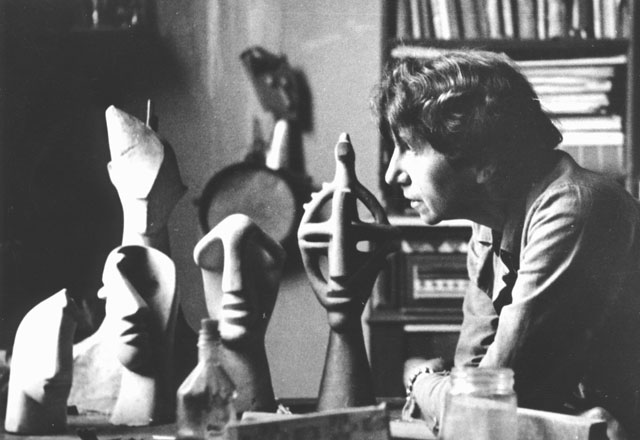 In 1929, Mammen had the opportunity to see the American Vander Clyde perform as the female impersonator Barbette and went on to make a coarse – and almost grotesque – pastel sketch of him in wig and hat. In her images of couples kissing and dancing, the woman is nearly always looking downwards, failing to engage with her male partner. Images of two women, on the other hand, are typically far more intimate and connected. 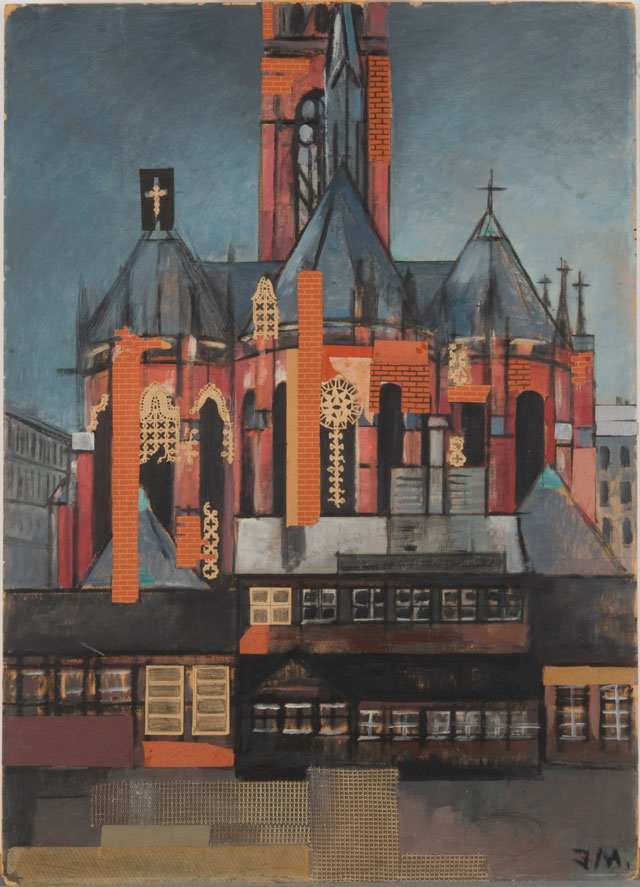 Further fuelling suppositions regarding her sexuality, in 1931-32, Mammen, commissioned by the Berlin gallerist Wolfgang Gurlitt, produced a series of lithographs to illustrate a special – but, sadly, never published – edition of Les Chansons de Bilitis (The Songs of Bilitis), a collection of erotic poetry in the manner of Sappho by French writer Pierre Louÿs. The Songs tell of the life of a courtesan in Mytilene, not far from the island of Lesbos. The emotions in these works are strong, with the viewer not knowing quite whom to pity the most on seeing the pleading, possessive clasp of the envious lover in Jealousy, and the defiant gaze of she who seeks to escape. Other works are more tender, as for example the watercolour and graphite Two Women Dancing (c1928), which also has an air of sadness, often apparent in her subjects’ eyes. Here, the couple’s fingers are tightly entwined, seeking consolation and giving comfort. 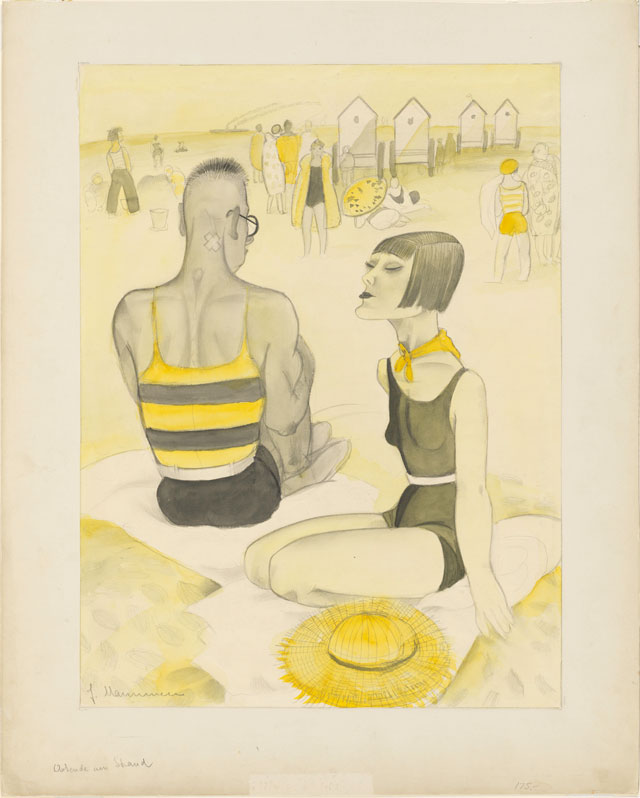 These drawings and paintings form only a small part of Mammen’s oeuvre, however, with her later work expanding to include sculpture – clearly influenced by the likes of Henry Moore, with an interest in the permeation of mass and space – and various styles of abstract painting, incorporating both a Picasso-esque period and a later phase of collage and childlike strokes, calling to mind the likes of Paul Klee and Joan Miró. That Mammen absorbed and worked with the dominant artistic styles of the time was obvious even from her early years in Paris and Brussels, and some of the earliest works in the exhibition – shown in the final room so as to contrast with some of her last – demonstrate the influence of symbolism and aestheticism. 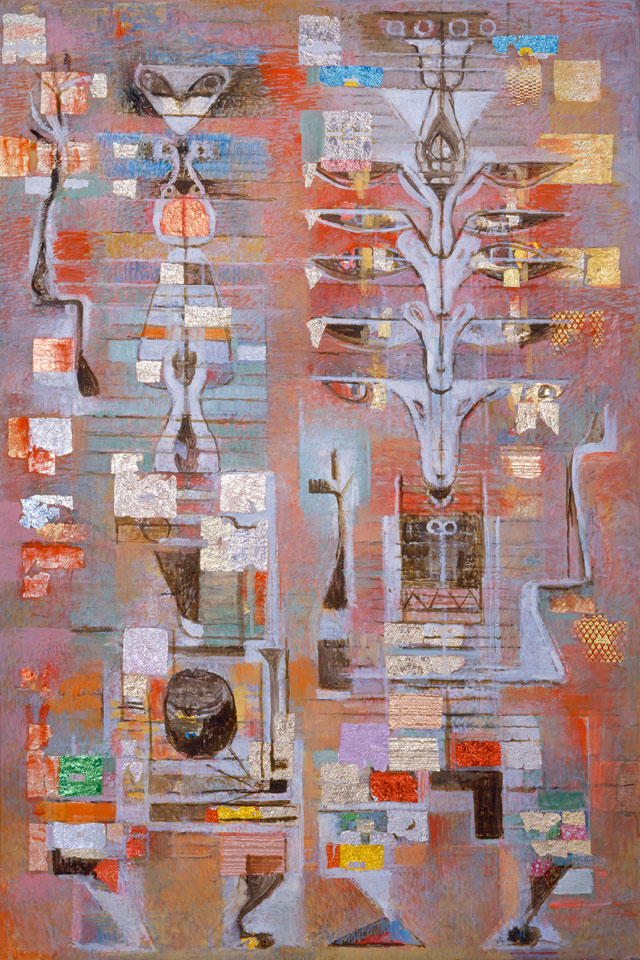 The Picasso works stem largely from the period following 1933, when, due to the rise of National Socialism, most of the journals and magazines for which Mammen worked ceased publication or were forced to change their tone, in the process of Gleichschaltung. Mammen began, therefore, to move away from her illustrative, figurative, “realistic” style, experimenting with abstraction. In 1937, she visited the International Exposition in Paris, where she saw – and was hugely impressed by – Picasso’s Guernica. Yet while the painterly skill of her more abstract works itself cannot be criticised, these paintings carry nothing of the allure or the personal insight of her Berlin-scene era.

The collage works, on the other hand, are magical, naive and charming. Developed in the 50s, they incorporate shiny sweet wrappers and an impasto application of paint, referencing, in part, her love of stained glass. Church Window (c1955-59) also shows the influence of Jackson Pollock, while Sunset in Helgoland (c1960-65), with its fragmented birdlike figures, is unmistakably Miró-esque in its playfulness. Marionettes (c1967-69), with its layers and colour, and the flock of ladybirds, is sheer joy, while, once again, a million miles away from the club and bar scenes of the roaring 20s. 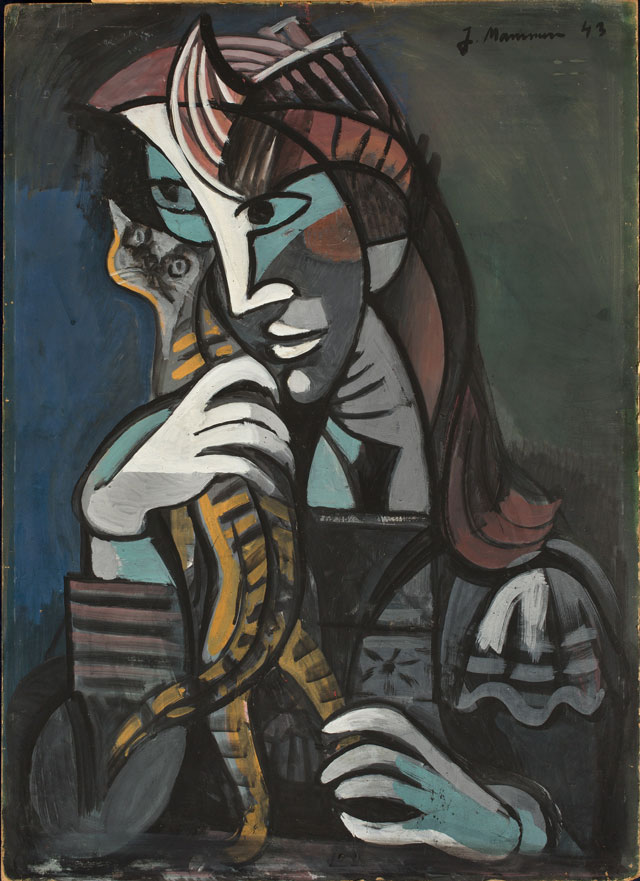 In her final years, Mammen withdrew again, began to use mystical symbols in her paintings, and became obsessed by the colour white. Her playful works bled their colour – perhaps as a premonition of death, perhaps an achievement of some level of serenity.

With more than 170 works on show, this exhibition is expansive and, while it is wonderful to be able to bring Mammen out of the shadows and celebrate her as a 20th-century name that deserves to be added to the canon, it is perhaps a little too expansive for an artist so discrete and modest. It seeks to reveal too much of someone who sought to remain invisible and to see rather than be seen. My first encounter with Mammen’s work came a few years ago on visiting her studio on Kurfürstendamm, now managed by the foundation set up in her name. It is preserved much as it was when she died, and visiting it is like entering a time warp and returning to the golden age of 1920s Berlin. There, although the presence of Mammen can be felt, so, too, one feels able to see into another world, expecting, when stepping back out on to the bustling street, to see women in furs, walking tiny dogs or following, seemingly reluctantly, on the arm of some ruddy man with eyeglass and stick. In the sheer scope of this exhibition, sadly some of this intimacy and absorption into Mammen’s world is lost. Nevertheless, it is an overdue and worthy exposé of a superb and undervalued artist, and certainly ought to be visited and enjoyed.

• Further information about Jeanne Mammen can be obtained at the website jeanne-mammen.de 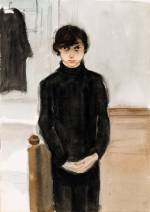 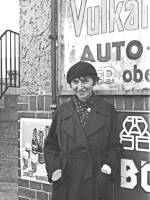 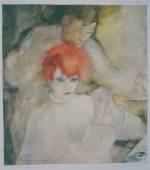 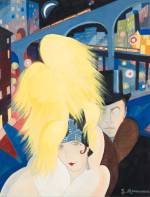