Kitaj: Portraits and Reflections is the first major solo exhibition in the UK of the American artist RB Kitaj (1932–2007) since the Tate Gallery’s controversial Retrospective in 1994, although a small show: Kitaj: in the Aura of Cézanne and Other Masters was shown at the National Gallery, London in 2001–02.*

In 1985 Kitaj had been elected a Royal Academician, the first American to be so honoured since John Singer Sargent at the end of the 19th century. The Tate show, then, should have been the culmination of Kitaj’s career and a great moment for the artist yet it became the most vehemently attacked museum exhibition of an artist in living memory. With hindsight it has been suggested that the show was “too heavily weighted with recent paintings, and burdened also with his literary inclinations in the form of lengthy explanatory texts which he hung next to his pictures”.1 The show was panned by critics and while Kitaj was still reeling from what he perceived to be unreasonable and highly personal criticism, his wife Sandra Fisher, also a painter, died suddenly. “The anti-intellectualism, anti-Semitism and chauvinistic distrust of foreigners that characterised the worst of these vindictively personal reviews brought out the shabbiest aspects of the British press and left Kitaj angry and deeply depressed. The death of his wife of a ruptured aneurysm on the brain only weeks after the close of the show seemed to him to be too much of a coincidence for it to have been caused by anything other than the traumatic stress of these prolonged and shameful attacks. The exhibition was much more warmly received in Los Angeles and New York.”2

Kitaj was shattered by the combination of professional criticism and personal tragedy. He blamed the critics for the death of his wife. In conversation and in works such as Sandra Three, an installation at the Royal Academy Summer Show (1997), Kitaj had in effect turned on his journalist persecutors, accusing them of murdering his wife. The art world united in his support: the Golden Lion was awarded at the Venice Biennale in 1995 and three honorary doctorates in as many years. Numerous museums bought his later paintings. He duly returned to America, to Los Angeles, with their son Max, where he lived in close proximity to the children from his first marriage, and to his grandchildren.

Kitaj’s presence in London over a period of more than three decades has been recognised as contributing much to assure the continued importance of painting, specifically of representational painting, and of traditions of drawing that had seemed in danger of dying out. His art school contemporaries and artist friends included Lucian Freud, Frank Auerbach, Leon Kossoff and David Hockney; they remained the closest of friends until his death. He was also close for most of his life to poets Robert Creeley and Robert Duncan; the writer Philip Roth, and the philosopher, Isaiah Berlin; the charcoal portraits, A Jew in Love, (Philip Roth) (1988–89) and Isaiah Berlin (1991–92) in the exhibition are superb. Dialogue with creative people, as Helen Watson points out in the Foreword, of Kitaj: Portraits and Reflection, was an essential component of his approach to art; many are the subjects of works in the Kendal exhibition. Kitaj: Portraits and Reflection was developed by art historian Marilyn McCully and writer Michael Raeburn, after Kitaj had invited them to do so, shortly before his death.

Kitaj was one of the most formidable and articulate artists to develop a personal iconography drawing inspiration from a range of sources. The human figure is central to his work, and in this he was against the ascendant position of abstract art. In the context of writing about Francis Bacon, who Kitaj admired, I explained his choice of figuration:

In spite of the bewilderment that most of Bacon's portraits express, there is an unexpected affirmation in the choice of formal language and the precision and care applied to the act of painting: the placement of each head, each brush stroke, every subtle hue, the manner in which the figure inhabits the space, the form within the picture plane. There is a common purpose for human existence established in the tradition of portraiture, the primal act of painting that links him in formal terms to the Old Masters, and to the history of art itself. A quiet authority, is established, by the artist amid the shrieking pain.3

Jewishness is a central theme in Kitaj’s work, especially after his first visit to Jerusalem in 1980. “I feel more human, more universal, more personal, more daring as a painter if I can put the Jewish question to my art and to myself.” Rudolf observes that for Kitaj the Jewish question is “a psychically enabling device”4 for his work to be done although in visual terms a Jewish iconography is present in only a minority of works. The key to appreciating Kitaj’s work is to reconcile the visual elements with the ideas depicted and references made. The paintings contain autobiography, art historical referencing and issues surrounding death and love. He began consciously to explore the Holocaust in depth through pictures and writing in the 1980s, expanding the notion of Jewish exile to include blacks, Arabs, homosexuals, Gypsies, Asians and political émigrés; all those, in fact, who are “widely despised, disliked, mistrusted, sometimes tolerated, even taken up here and there and shown a nice life” (First Diasporist Manifesto, 1989).

Anthony Rudolf has written an essay “The Jew etc”:

Where Kitaj differs from his peers, even other Jewish ones like Lucian Freud, Leon Kossoff and Frank Auerbach, is the public nature of his love of the written word. For all I know, the three painters mentioned are great users of words in one way or another, but words (or the Word) are absent from their aesthetic. Unlike Kitaj, they never go public with extensive texts, whether about one particular picture, their own art in general or that of their precursors; nor will you find words contained in a painting. Kitaj on the other hand, makes pictures like The Murder of Rosa Luxenberg or Reflections on Violence where the words enter the frame, subverting or complicating the centripetal unity of the painting.5

We all carry around a pantheon of exemplars. Alive or dead, these mentors are there for us to engage with. Kitaj’s extensive pantheon includes, of course, his all-time hero, Cézanne (‘the greatest painter who ever lived’), Edward Hopper (‘my favourite American painter’), Duchamp, Degas, Van Gogh, Kafka, Emily Dickinson, Ezra Pound (‘my favourite anti-Semite’), Walter Benjamin (the elective affinity between Kitaj and WB is uncanny), Gershom Scholem. Kitaj argues that in all spheres except painting – the other arts, the human sciences and so on – Jews have figured disproportionately among the pioneers of modernism, including the great iconoclasts. Many of these pioneers - Schoenberg, Einstein, Eisenstein, Wittgenstein, Freud, El-Lissitsky, Groucho Marx, Aby Warburg, and Edgar Wind – could be added to the names of the Jews and non-Jews already listed in his pantheon. Kitaj as a man, citizen and artist inhabits a lieu de mémoire – yielding a creatively energising tension in his work – between the immense power and weight of his revered fathers and the equally immense collective power and weight of those who were murdered because of what they were.6

Kitaj’s Jewishness is central to his art but it is one element among many in his rich and complex oeuvre, which includes literature, sport, sexual love, London, America. His favourite artists include Giotto, Degas, Matisse, Kafka and Munch and most importantly for his late work, Cézanne.

I’m always anxious. I’ve been a dissident sceptic, even a pessimist, all my life. If I were even more anxious, I might be another Cézanne or more likely another Frenhofer, the obsessive painter in Balzac’s Unknown Masterpiece. The dictionary definition of anxiety I like best is ‘strained desire’. My anxiety gets me into all kinds of absurd trouble, like the Surveyor K in Kafka’s The Castle. I often feel jumpy and expectant in the studio so I listen to jazz and blues all day like Mondrian (a hero of my old age). Sometimes I even calibrate my brushstrokes to the rhythm of the music. I would guess that most ambitious painters are anxious.7

The first painting by Kitaj I saw was the elegant and powerful If Not, Not, (1975–76), in the collection of the Museums of Scotland, Edinburgh. I could not have been prepared myself for a contemporary work of art of such power, finding it visually exciting and utterly compelling. I met Kitaj years later, at the unveiling of its reproduction in tapestry form, at the new British Library, a commission by his longtime patron and close friend Colin St. John Wilson, the museum’s architect, and we became friends. The family portrait of Wilson, his wife and their children, The Architects: Colin St John Wilson and M J Long (1981), is one of the finest and most complex, in formal terms in the exhibition. A seminal painting If Not, Not, was inspired in art historical terms by Giorgione’s, Tempesta; in literary terms by Eliot’s Wasteland and in Jewish/historical terms by the Holocaust. Visually it created a sense of having embodied many complex strands of life such as memory, knowledge, pain and its opposite, history and notions of the future; objects and forms that are solid and permanent, others that are momentary, ephemeral.

In Kitaj’s late works there is a rough unfinished quality with bare white canvas revealed, which Kitaj suggests possibly expresses nothingness – death. He has admitted to “crimes against painterly painting”. “These undecided pictures are about death-in-life, and the blank negative spaces can be read as Emily Dickinson’s ‘White Exploit’, her term for death.”8 Kitaj’s portrayal of death, loss and subsequent alienation is extraordinary in the present world situation and it reminds us of the central role to be played by the visual arts in conveying ideas with subtlety and conviction. There is a searing tone in a number of the late paintings in the Kitaj show at the Abbot Hall. Early works such as Erasmus Variations (1958) show the seemingly endless inventiveness of Kitaj’s image-making. There are challenging and difficult works, such as The Rise of Fascism (1975–79) that express a level of genuine pain that is uncommon in the visual arts at present, and a number of masterful late Self-Portraits: Self-Portrait (after Masaccio) (2005); After Cimabue (2006); Self-Portrait (2007); and The Jewish Scream (Last Self-Portrait) (2007). Of Kitaj’s homage to Cézanne in Self-Portrait (2007), the curators observe, “the placement of the predominantly green colours in this composition actually forms a mountain. Kitaj has taken the radical step of representing himself in terms of Cezanne’s Mont Saint-Victoire. This moving tribute provides final confirmation that for Kitaj the summation of human experience can best be expressed through art”.9

Last year Phaidon made a 4th re-print of Marco Livingstone’s superb monograph of the artist. In the past 30 years Livingstone was and remains close to the London School artists: Lucien Freud, RB Kitaj, Leon Kossoff, Frank Auerbach and David Hockney. Possessing a rare talent to communicate with artists and read images – as well as applying meticulous scholarship Livingstone conveys the context and meaning of these remarkable artists with unstinting energy. For all who knew Kitaj, a rare and brilliant individual, his death was a very deep blow. The long trek to Kendal (from most places) passes through the most beautiful countryside, where the Lake District itself enables one to reflect on Romantic Spirits whose profound observations we cannot, as a society, manage without. It felt like an appropriate homage. Through Kitaj, artists and poets of the past have been revitalised, endowed with meaning for further generations. Kitaj’s observations of the human condition ensure that their spirits endure; through his relentless passion for art and life, one is both nourished, and strengthened.

*This review (September 2011) incorporates part of the review written by Janet McKenzie for Studio International at the time of the National Gallery, London exhibition, in 2001, for which an excellent catalogue was produced. 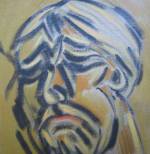 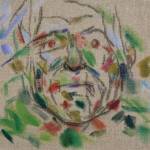 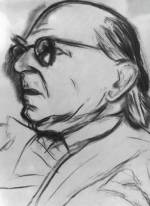 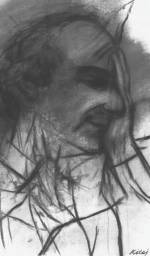 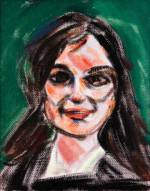 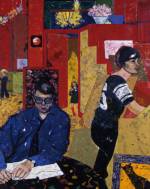 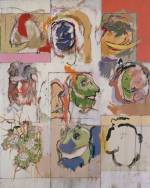