Kate Whiteford: ‘By confronting simple questions, bigger ones emerge. That is the essence of my work’

Kate Whiteford: ‘By confronting simple questions, bigger ones emerge. That is the essence of my work’

The artist talks about her new work, now on show at the Mercer Art Gallery in Harrogate, looking at how Capability Brown transformed the English landscape through the manipulation of scale and perspective 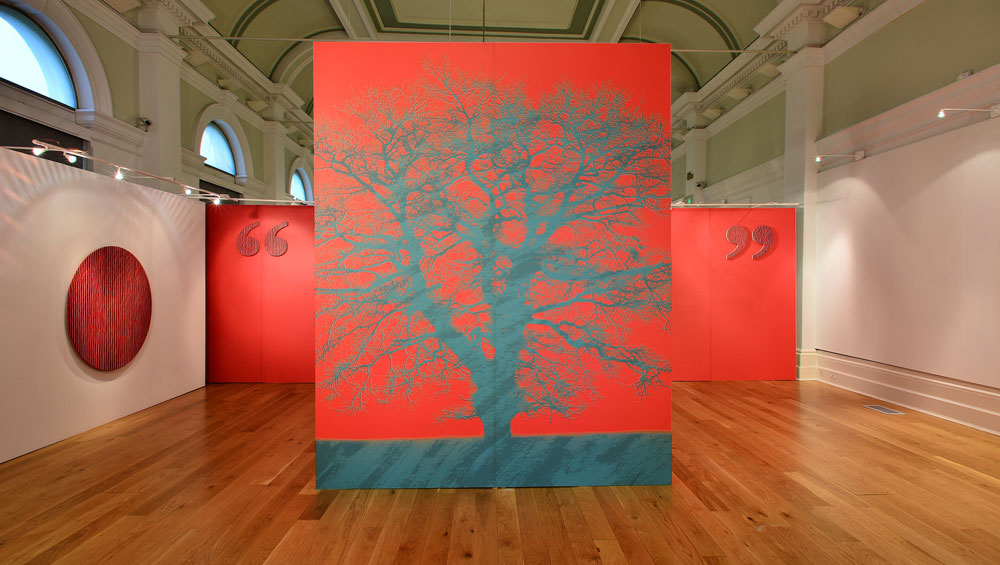 Kate Whiteford is an eminent Scottish artist based in London. Her work is in the permanent collection of the Tate Gallery; and with David Mach and Arthur Watson she represented Great Britain at the Venice Biennale, 1990, with the exhibition Tre Scultori Scozzesi (Three Scottish Sculptors). Her work is unique in the manner in which she embraces the landscape, creating haunting, poetic works using aerial views and archaeological imagery and sites to evoke a deep sense of humanity’s relationship with the environment from prehistoric times. Her love of classical art and her consummate drawing skill both underpin her evocative imagery.

This summer is the 300th anniversary of the birth of the great landscape gardener Lancelot “Capability” Brown [1716-1783]. To mark the occasion, the Mercer Art Gallery, Harrogate, has commissioned an exhibition of new work by Whiteford that looks at the way he transformed the English landscape through the manipulation of scale and perspective. False Perspectives, which is funded by Arts Council England, runs until 18 September 2016 and sees the gallery transformed by superb large-scale images printed on to the walls of the gallery.

Janet McKenzie: The majestic oak tree planted by Capability Brown in the 18th century at the Harewood Estate in Leeds is central to your exhibition at the Mercer Art Gallery. Can you explain how you address and bring into question the illusionism that Brown established by working with different scales to make the horizon seem further away?

Kate Whiteford: I selected the image of a 250-year-old oak planted by Capability Brown at Harewood and “planted” it in the dead centre of the gallery on a specially made free-standing wall to dominate and divide the space. This tree is connected by red perspective lines along the floor to another image of a smaller oak at the far end of the gallery. This is the main axis and metaphorical spine of the exhibition. It disrupts the architecture and frees up a new reading of the space. I have taken out the partition walls, clearing the space to emphasise scale and volume and allowing the coffered ceiling and chandeliers – almost inverse trees – to become part of the installation. The installation, in effect, mimics Brown’s spectacular confidence and vision, where he would open up grand vistas and plant vast swaths of trees of different sizes to manipulate perspective and enhance the grandeur of the view.

JMcK: You play with the gallery space just as Capability Brown played with the landscape, both big steps in conceptual terms away from the strictures of the picture plane, and from easel painting. Brown could be seen to be spectacularly confident for his time, a postmodernist even?

KW: Capability Brown was looking at landscape painting, especially Claude Lorrain [1600-82], for inspiration, and cleverly translates the tricks of perspective used in painting on to a real landscape. The planting of smaller trees around the horizon to enhance the view could easily be translated into the present, in the vast, pre-computer-generated imagery, filmset, for example. His vision allowed him to sweep away any existing architectural structures or formal gardens and he would often flood the middle distance with a lake – another device borrowed from painting. He was looking at Lorrain for inspiration for his “Noble Prospects” but to achieve this he was applying a radical methodology of false perspectives. As you say, he could almost be seen as postmodern. However, many of his grandiose “improvements” were controversial at the time, to the extent that he was gently mocked by characters in Jane Austen’s Emma [which was published in 1815].

JMcK: Comparing his art to “literary composition”, Capability Brown declared: “Now there, […] I make a comma, and there, […] where a more decided turn is proper, I make a colon; at another part, where an interruption is desirable to break the view, a parenthesis; now a full stop.” Can you describe how you have in turn quoted Brown’s use of punctuation in your Mercer Art Gallery installation?

KW: Brown’s “punctuation” quote intrigues me, and I love the idea of landscape as text and all that it implies. It is tempting to read the groupings of trees in Brown’s landscapes, such as at Harewood, as paragraphs of text, often ending in a single oak. When this oak is in full leaf, it acts exactly like a full stop in the open ground beyond the tree “paragraph”, and provides a pause in the overall design.

In the exhibition, the punctuation marks are translated literally, with a semi-colon, quotation marks and a full stop acting as ciphers to hold the natural, organic images in place. Optic Tree is held “in parentheses” by the quotation marks on the walls on either side, while a giant painting of a full stop fills the side wall. By using devices such optical shifts and after-image, out-of-scale punctuation marks and visual disorientation, my work forces you to reconsider, and disrupts everyday assumptions. By turning everything on its head and inverting the familiar, whether a tree or a comma or a full stop the size of a man, everything can be made open to question.

JMcK: The grandeur created and implied by Brown and his clients placed Great Britain at the centre of the world in imperial terms. Yet your placement of a monumental Chippendale sofa on to the Capability parkland within the Harewood Estate in the landscape seems amusing, even mischievous! What does the Chippendale signify, and how is it intended to be ironic?

KW: Why does the Sitelines sofa, with its elegantly curving back, echo the curving lines of Capability Brown’s landscape? Do people realise that the apparently natural landscape is also manufactured, that the Chippendale furniture at Harewood was commissioned at the same time, and follows the same philosophy? Does Hogarth’s serpentine “line of beauty” still influence our ways of seeing, and is the present rooted in the past, or is there a rupture? The issues surrounding Capability Brown and his legacy pose questions of who we are, or who we think we are. The clues are all there in the work in the gallery.

JMcK: A large photo-print of Sitelines, Harewood (After Chippendale) (2001) is included in False Perspectives. Can you explain the scale of manipulation required of your drawings, in order that they can be “read” in the landscape correctly?

KW: Alongside the large photo-print of Sitelines are three computer-aided design drawings that show the anamorphic distortion required for the work to read in correct perspective from a given viewpoint – in this case, from the terrace of Harewood House. The calculations required to “correct” the sofa revealed that the landscape design was also cleverly manipulated to read in a certain way, and gave me an insight into Capability Brown’s working process. In effect, I was creating an illusion on top of an illusion, the one keying one into the other.

I was intrigued to discover that the scale of the Harewood landscape was an illusion, and the apparent distances did not make sense. A survey from the house to the far horizon confirmed that the distance was much less than it appeared to the naked eye. The hillside was nearer and steeper, but made to seem more distant by the clever planting of tree lines. Someone else had already made anamorphic calculations from the terrace. Of course, artists have always been fascinated by the use of anamorphic drawing since the development of perspective, for example the mysterious skull in Hans Holbein the Younger’s The Ambassadors [1533] continues to hold thrall.

JMcK: If Brown and Chippendale can be seen to reflect the prevailing views of 18th-century Britain, how does your current art practice reflect the atmosphere of a nation that has just voted to leave the European Union and assert its national identity (to quote the media)?

KW: Is the sky red? Is a tree green? Is this landscape a piece of theatre, a painting, a slice of Italy, or a corner of Yorkshire? Why does the sofa by Chippendale echo the same curving lines of the landscape? By confronting simple questions, bigger ones then emerge. That is the essence of my work. The work also invokes questions of language and authorship. In whose hands is reality constructed and by what means? Where does the power lie?

JMcK: Your sources of inspiration as a young artist include the American earthworks artist Robert Smithson [1938-1973], the British land artist Richard Long [b1945], and the Scottish poet, writer, artist and gardener, Ian Hamilton Finlay [1925-2006]. How did you come to depart from a studio-based practice and move in to the wider world?

KW: The experience of going to locate works in situ in Italy as a student and later working with archaeologists at sites in Scotland and Europe influenced my thinking, and gradually my working practice moved beyond the studio. Also, when I left the Glasgow School of Art, I was part of an artists’ group that proposed monumental artworks for the city. With hindsight, I realise that the scale of these ambitious projects were somehow connected with the loss of heavy industry and shipbuilding. The scale of that thinking impressed me and stayed with me. At the Venice Biennale in 1990, I had no hesitation in casting a land drawing in situ in the Giardini, filling a space double the size of most pavilions.

JMcK: Your watercolour works in this exhibition resonate deeply of emotions that are difficult to express. Do you find that the archaeology of Scotland, the incredible volcanic landscapes of the Hebrides and the Highlands evoke primal feelings?

KW: I have included four works on paper from the series Landlines, Lewis (2007). They were done after seeing this extraordinary landscape from the air. The whole island of Lewis is crisscrossed with lines and markings, and it looks like a drawing from above. In fact, many of the lines are drawn by hand – they are the peat cuts made by many generations along with the lines of “runrigs”, an ancient cultivation system carved out on the rocky headlands. The landscape of Lewis is a living document, a palimpsest of lines and markings that has taken me back to the island again and again, to try to capture its power. The dense watercolours in this exhibition and a Super 8 film A’Mhointeach/The Moor both emerged from this place. For this exhibition, I made a selection of 19th-century drawings and engravings of trees from the Mercer collection to sit in juxtaposition with the watercolours from Lewis. They are in conversation and their proximity throws up new and interesting readings.