To mark the 300th anniversary of the birth of the great 18th-century landscape gardener, this exhibition brings together portraits of Capability Brown and his clients, along with original plans, drawings and documents 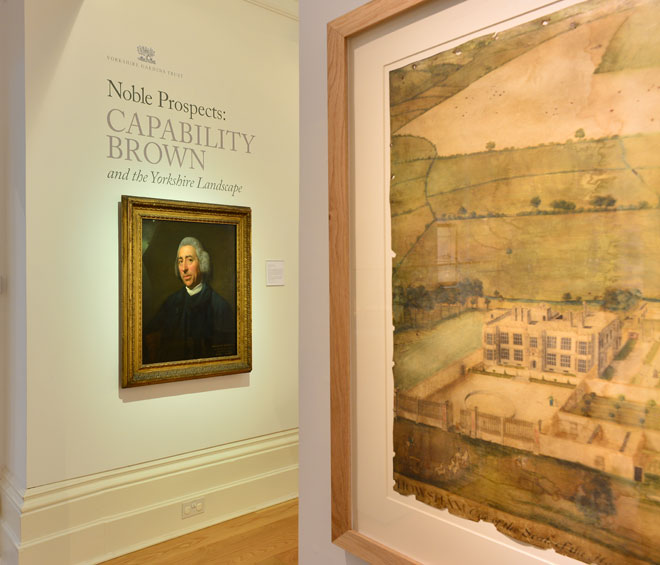 The Mercer Art Gallery in Yorkshire celebrates the 300th anniversary of the birth of the great landscape gardener Lancelot “Capability” Brown (1716-1783) this summer, with a show made up of portraits of the man himself and his Yorkshire clients, along with his original plans, drawings and documents. Paintings of his creations, as well as works of art that inspired his landscapes, are presented as key to understanding the appreciation of, and response to, his work during his lifetime.

Noble Prospects is one of a plethora of celebrations of the seminal landscape designer who has become synonymous with Englishness, yet many would argue that he was iconoclastic to the point of destruction. The Mercer has presented a critical, contemporary dialogue with Brown by artist Kate Whiteford. In conjunction with the Whiteford show, Noble Prospects, curated by Karen Lynch and accompanied by a fine publication, is therefore presenting more than just an historic appreciation in the year of celebrations of Brown across England. Whiteford examines the way Brown transformed the English landscape through the manipulation of scale and perspective. Her exhibition, False Perspectives, which is funded by Arts Council England, and runs from 18 June to 18 September 2016, sees the gallery transformed by her dramatic large-scale images printed on to the walls of the gallery.

Brown is an important character in terms of cultural history and ideas. At the symposium Landscape Transformed, held at the Royal Academy in 1995,1 the landscape designer and researcher John Phibbs claimed that more than 60 Brown landscapes were under threat. Yet Jane Brown’s The Omnipotent Magician: Lancelot “Capability” Brown (1716-1783)2 was published in 2011, and Michael Spens evaluated Brown’s key contribution to landscape in Gardens of the Mind: The Genius of Geoffrey Jellicoe (1992)3 and in The Complete Landscape Designs and Gardens of Geoffrey Jellicoe (1994),4 his seminal study of Jellicoe, who has been dubbed “the 20th-century Capability Brown”. These last two books by Spens, and his lectures on the Enlightenment and on landscape in the UK and America, as well as his major publication in 2003, Modern Landscape,5 were all underpinned by the value he placed on  Brown’s contribution to landscape and culture. The cultural significance of Brown as the great English 18th-century landscape master, Spens observed, had grown significantly over the past 20 years, in line with the surge of Enlightenment studies in Britain and America, as well as a new awareness of landscape at large, and also a revision of thinking about the relationship of buildings to “landform”. US president Thomas Jefferson visited England in 1786, not long after Brown’s death, and was impressed when he visited a number of Brown’s landscapes. This was significant in underpinning Brown’s longer-term status. It identified the survival of an Enlightenment culture in Britain, which was followed on a generation later, by the tracts of Edmund Burke (A Philosophical Inquiry into the Origin of Our Ideas of the Sublime and Beauty, 1756) and of William Hogarth (The Analysis of Beauty, 1753). Such ideas had been at variance with the pursuit of the picturesque.

As she was installing False Perceptions, at the Mercer Gallery, Whiteford explained the irony of describing Brown’s landscapes as “natural, English landscapes” when they were, in fact, created through an iconoclastic approach to landscape design. Existing Tudor gardens were destroyed to create them with the same zeal for change as Oliver Cromwell adopted to wreak the destruction of churches and cathedrals in Scotland, during the Reformation. As a Scot, Whiteford perhaps has the distance to have a more challenging dialogue with Brown than most.

She explains: “My work is not about ‘Capability’ Brown per se, but his landscape designs enable me to examine questions of reality, perception and identity. My dialogue with Brown addresses fundamental questions about whether what we see, is in fact true, whether what you see is really what you get. What does it mean if something as fundamental as what we understand to be a ‘natural English landscape’ is, in fact, highly manipulated and constructed and therefore the result of culture, not nature?”