Juxtaposing a sprawling selection of Althoff’s works with a tribute to British studio pottery, the first UK survey of the perpetual enfant terrible raises more questions than it answers 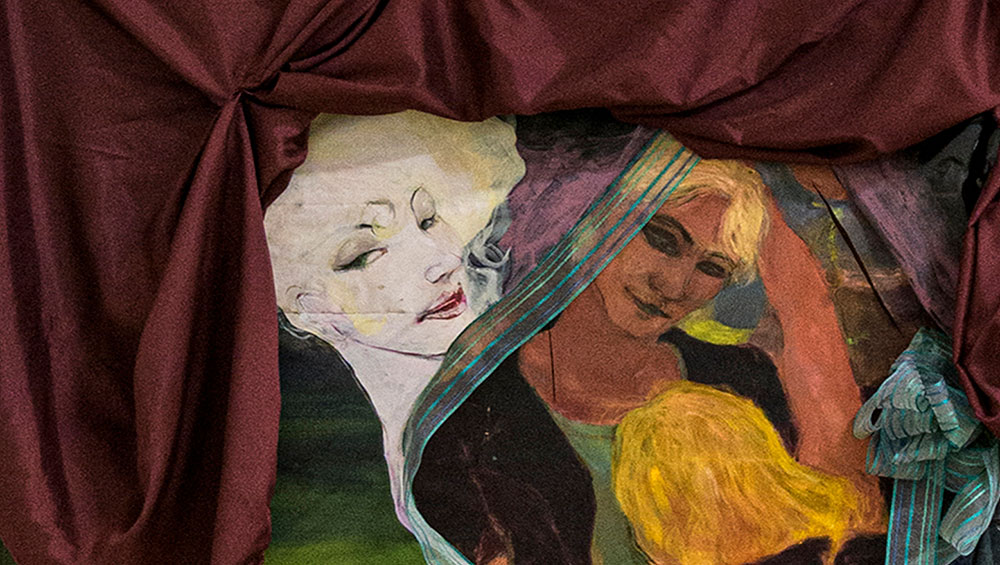 I doubt there has ever been so much art crammed into the Whitechapel Gallery. Kai Althoff Goes With Bernard Leach, the first institutional show in the UK of the Cologne-born, New York-based Althoff (b1966), is stuffed to the gills. Althoff is difficult to categorise, a jack-of-all-trades. He has produced dance music, squatted in galleries and acted with Isa Genzken in a rambunctious comedy film. In recent years, however, the focus has been on paintings, drawings and collages, realised in a disparate array of methods, formats and materials. 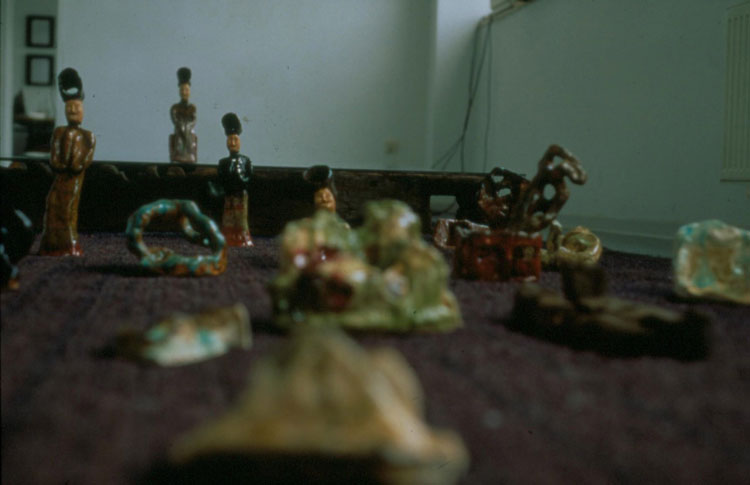 The present exhibition is no exception. A pick-and-mix selection of Althoff’s work might include vaguely neo-expressionist religious scenes, subdued landscapes inhabited by puck-faced fairy folk, sketches of cartoon-like characters woven in cotton and felt, and thorny abstract collages assembled from lacquer and gift wrap. They often feel like glancing excerpts from a narrative, the remainder of which we will never see. Many possess a certain drabness, as if left to moulder in an abandoned house. One of Althoff’s talents is the ability to render colour that is at once bold and faded, implying a former state of splendour that never occurred. Another is a penchant for turning DIY construction into a virtue. Althoff compiles bits and bobs into peculiar wholes. He might stick frilly lace on an otherwise austere abstract, split a street scene between two pebble-shaped canvases or draw on top sheets of paper barely held together by tape. Even his duller pictures are materially exciting. 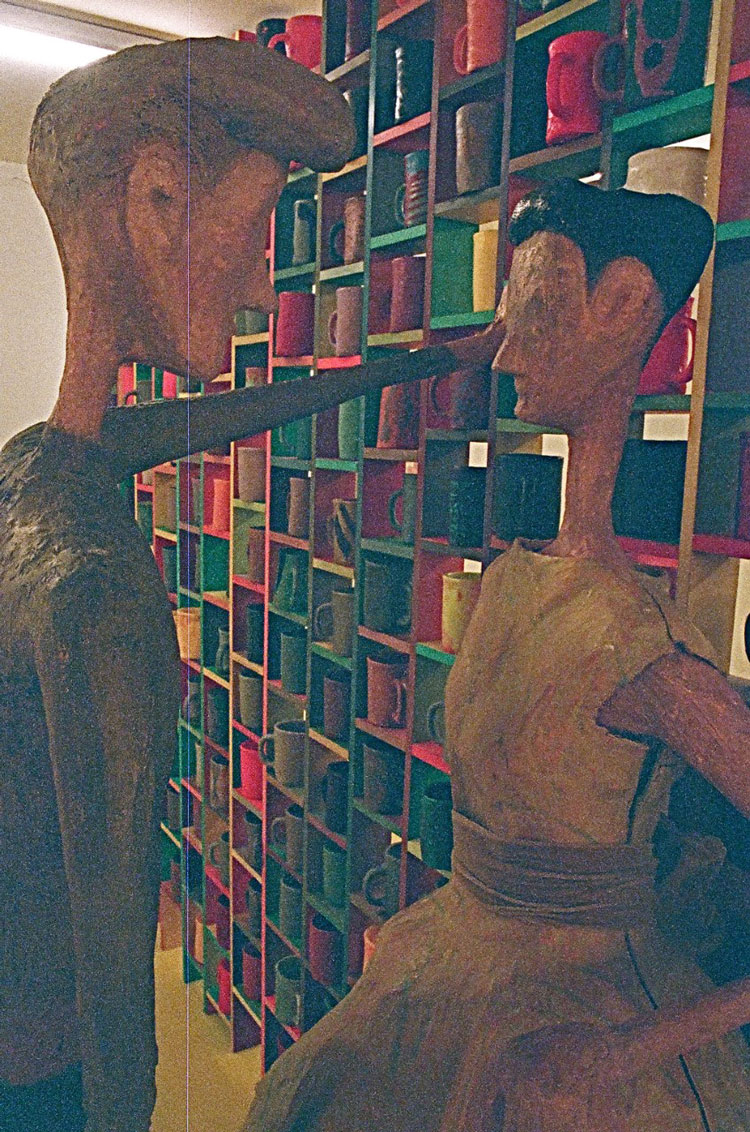 Like many painters who emerged at the tail end of the 20th century, Althoff’s style and subject matter seems haunted by the art of 100 years prior. But I am not sure that high art offers the clearest route into Althoff’s bizarre world. His work seems instead to digest the half-remembered visual detritus with which human experience is strewn: album covers, psychedelic posters, comic strips, illustrated children’s books. Some works have the lucid colouration of stained-glass windows in a postwar church. A pair of 2014 oil and enamel works showing pigs hidden within brown grooves resemble the sort of folk art you might find in a rustic gasthaus. 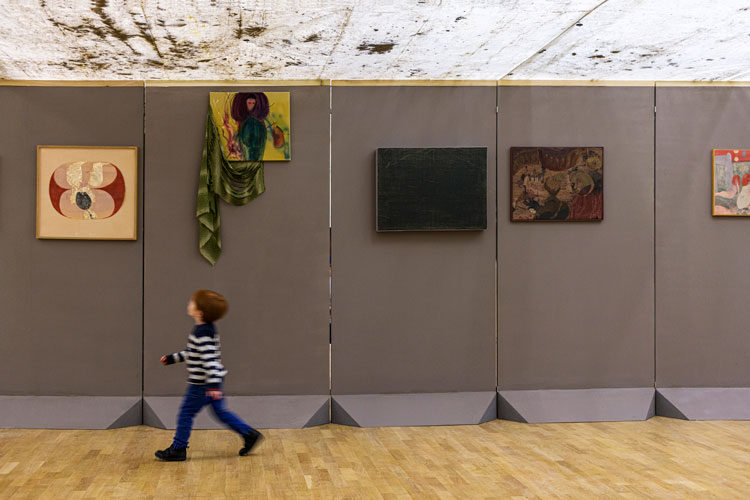 Althoff is very good at evoking place. He has installed a translucent tarpaulin canopy in the Whitechapel’s main hall, halving the room’s height. It is scattered with leaf litter, so that the room resembles a roofless house, hastily covered over to keep out the rain. Beneath the canopy, works hang in apparent disorder. There are smudged pencil lines on some of the walls, as if no one cared too much for neatness. A polystyrene room divider bends across the hall in an apparently arbitrary arc. Whitechapel has been turned into the sort of gallery you sometimes stumble across in Europe’s easternmost regions, stuffed with a willy-nilly arrangement of local art unchanged since the 1990s.

Visiting the exhibition at opening time, I was alone for a few minutes. The experience was disquieting, as if I had trespassed into the private hoard of a collector with sadistic tendencies. Althoff’s imagination can be cruel. In Das Fleisch seiner Knochen (2002), a semi-nude man’s knees rot away to reveal the bones beneath. The spectre of brutality lingers everywhere. Untitled (Grazing) (2001) sees young men grovelling on their bellies. A 1997 drawing has one man in a conductor’s cap bestride another, clutching him by the back of his jacket. Even Althoff’s calmer works seem to live in a haunted demimonde, where sinister goings-on occur behind tattered curtains. 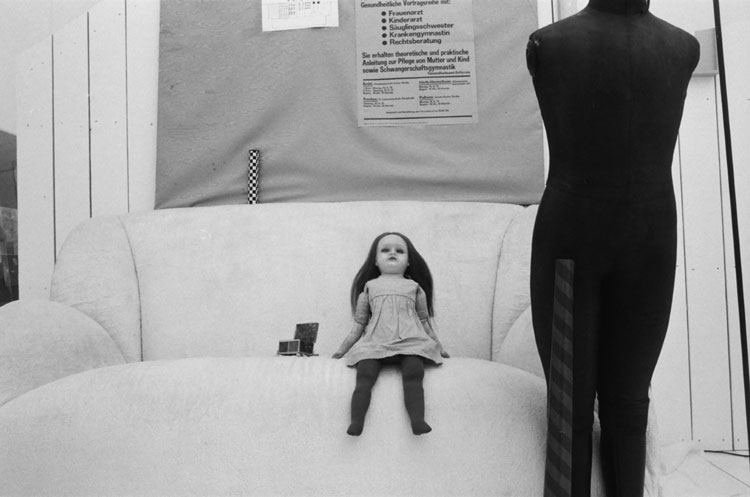 Althoff has long held a reputation as a provocateur. He once urinated on paintings before packing them off to buyers. At Kai Althoff: and then leave me to the common swifts, his 2016 Museum of Modern Art retrospective, he borrowed works from collectors and then left them lying unseen in crates. Although his provocations are mostly directed at the art establishment, he likes to needle audiences, too. One gouache from 1994, in a sallow, realist mode, sees a baker raise his right hand in what might be a Heil Hitler salute, willing or reluctant; a pale wad of dough sits on his windowsill like a pound of flesh. Untitled (Olympic Gestures) (1985) includes two study-like depictions of a strong-jawed Aryan type wearing an Olympic laurel. The artist has spattered the paper with faeces, possibly his own. Althoff seems to claim the entire history of images as permissible subject matter.

This notion came under strain in 2018. A sequence of works displayed at New York’s Tramps gallery was accused of drawing on orientalist stereotypes. Pieces from that series here reveal a complicated picture. Althoff undeniably draws on eroticised cliches: rows of submissive courtesans, recumbent young men, nude bodies prodded by the spears of warlords. Yet, as often as not, he often shows east colliding with west – a fearsome oni munching on a man is clearly based on Goya’s Saturn – or dispenses with east Asian aesthetics altogether. Althoff seems less engaged in perpetuating particular stereotypes than drawing on visual history without limit. Whether he warrants the licence to do so remains an open question. 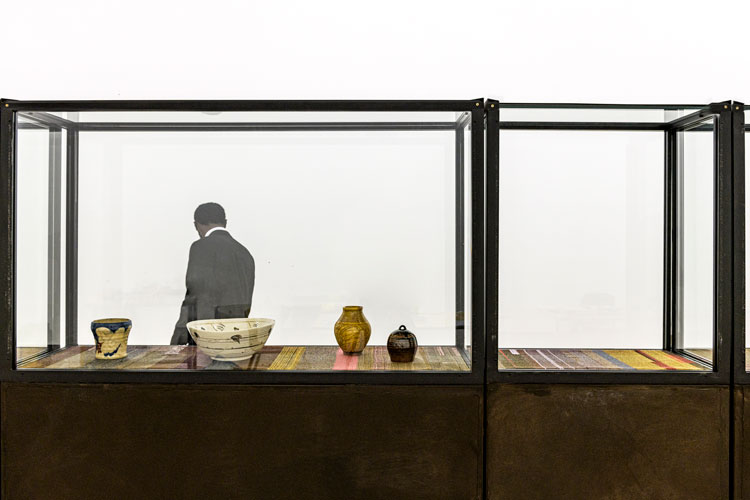 The strangest provocation at Whitechapel sits upstairs. In the exhibition’s third room, Althoff has installed a custom-designed vitrine showcasing more than 30 works by Bernard Leach (1889-1979), who is regarded as the “father of British studio pottery”. These are fabulous objects: jugs, plates, urns, bowls and even buttons, spun with earthly beauty. In the exhibition’s press material, Althoff calls Leach his “idol”, and one could draw parallels between their embraces of imperfection and materiality. But so much else about their respective practices is removed. Perhaps Althoff is being impish – Leach, who learned his technique in Japan, has been accused of appropriation. But here, as with so much in Althoff’s practice, you get the sense that he would rather the connection remain elusive. 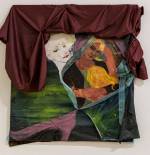 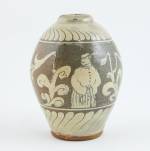 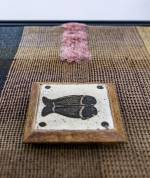 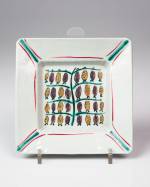 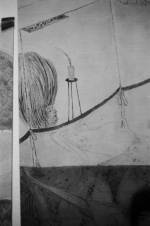