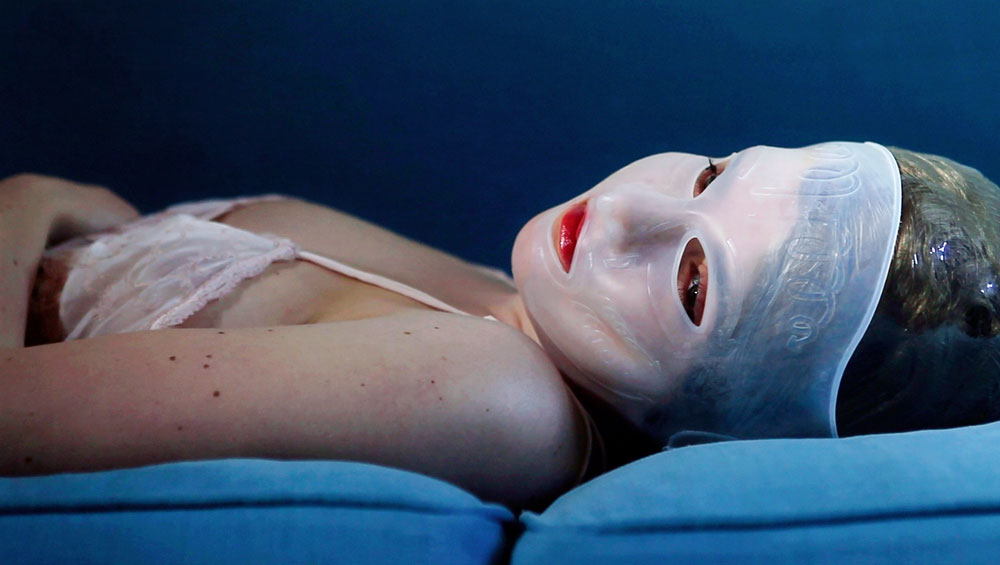 “I was one of those people who could sit in front of the mirror for hours, not out of vanity, but out of a horrible curiosity,” Juno Calypso tells me over a cup of coffee in the Geffrye Museum of the Home in Hackney in east London. It is an appropriate venue to discuss her work, and she admits to having spent a lot of time there. Creating interior worlds, both literal and metaphorical, is at the heart of Calypso’s photography, which often centres on the character of Joyce, a lonely woman whose dreams have failed to materialise. When researching locations, Calypso found a hotel in Pennsylvania themed for honeymooners and travelled there with a suitcase of wigs and lingerie. In the resulting series, Joyce becomes a figure of solitude and disappointment. Absorbed in her own reflection – surrounded by shiny pink surfaces and lace – she is trying to live up to an absurdly contrived notion of femininity. 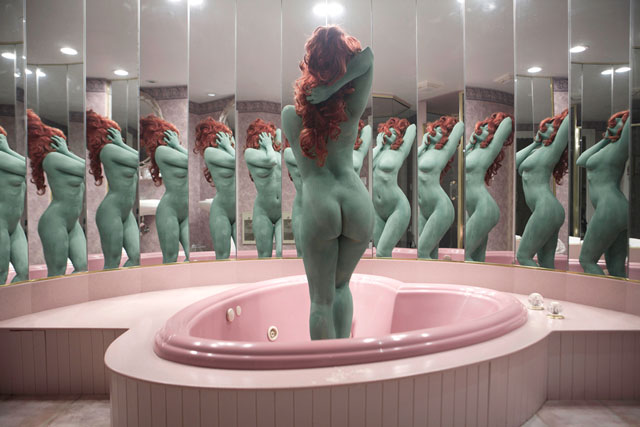 “I’ve always had a very dark sense of humour. I think I was born a little bit sad and disappointed,” Calypso says when I ask her about the root of Joyce’s frustrations. But Joyce and Calypso are not to be confused: “Every time I hear alter ego I cringe because it sounds like I can’t wait to be her and that’s not the case. Everybody wants to know who her husband is, what she does, how old she is. Or they’ll come up to me and say, how is she? But she’s just a character without a story.”

Emily Spicer: Tell me more about Joyce. How did she come to be?

Juno Calypso: She was born when I was at university. I was trying to be a fashion photographer and I kept creating all these cliched images of women. I wanted to take pictures of women looking as seductive as possible, like an Ellen von Unwerth or David LaChapelle. I wanted them to look edible, to look like you could eat them.

We had to present new work every week, but one week I didn’t have anything to bring in, so I brought in some pictures that I had done as a test for a fashion shoot. I was supposed to use models in Ann Summers outfits – sexy secretary, sexy this, sexy that – but, instead, I used myself and to make it less embarrassing, I pulled all these funny faces. My tutor just started laughing. I asked her what was so funny and she said: “Your face, it’s the humour in your face.” I had never seen her laugh before. She told me to cancel the model and just go with it. 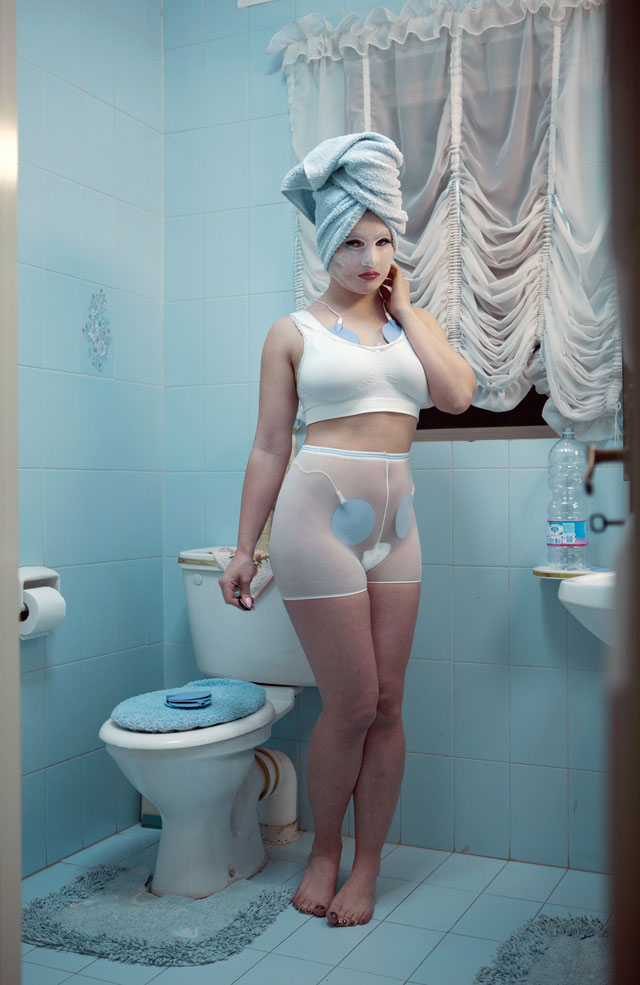 ES: How important is humour in what you do now?

JC: I wanted to make something funny because I just couldn’t believe the art world was so serious. But now I feel that maybe the humour in my work has gone a bit. It’s subtle now; it’s more black comedy in style.

ES: You keep returning to the US. What keeps drawing you back?

JC: A lot of British photographers and film-makers are going to America, but they are not the most informed people on the history and the current politics. I always wanted my work to be based in the UK, to use seaside towns, to go to Margate, or even eastern Europe. But then I found the honeymoon hotel in Pennsylvania. 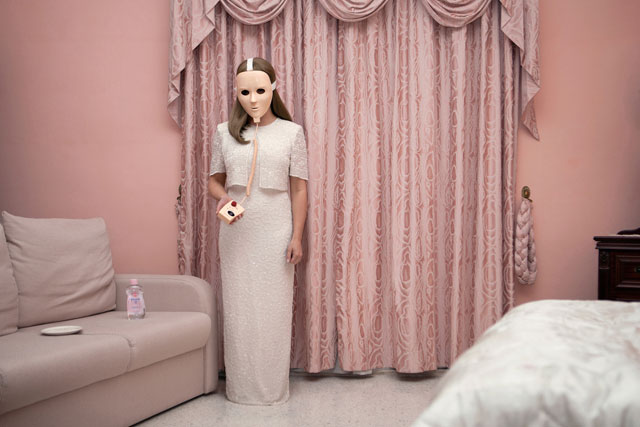 Juno Calypso. Twelve Reasons You're Tired All The Time, 2013. © the artist.

They know what they’re doing in America. They have got some really unique stuff. All the things you’d think would be shut down and refurbished just keep going. When I was there I understood why everyone comes here. Everyone is just so open with their wackiness. You get to meet so many characters. And now I’m like, stamp a fucking American flag on my head! I’m done! I’m like all those photographers I dismissed.

ES: Do current trends in gender politics, especially under the influence of [Donald] Trump, inform your portrayal of Joyce?

JC: I always try to keep in mind what my first tutor said. She told me to be careful about the images I perpetuate of women, because even though I’m a female photographer, most people won’t know that just by looking at my work. And even though they’re satirical, some people might see them as the real thing. 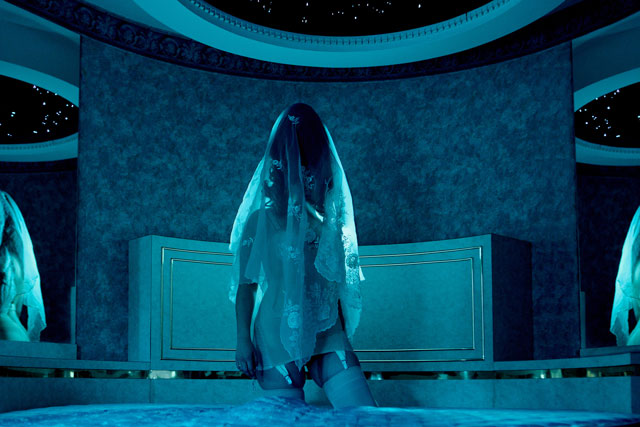 When I first went to America it was 2015 and Trump hadn’t got into people’s head yet. America [seemed like] this fun, crazy place. The second time I went it was the summer of 2016 and that’s when I started noticing Trump bumper stickers on cars outside the honeymoon hotel. Before that they were just fun, crazy characters, interesting and harmless, so sweet and so silly. And then all of a sudden they were Trump supporters. Suddenly, it didn’t feel as though I was in a film any more: suddenly, it was real life and maybe these people aren’t as innocent as I thought.

ES: Is that related to the physical processes that Joyce goes through to make herself beautiful? Is she reacting to the new reality that faces her?

JC: I think she’s overreacting. She’s overthinking, you know, when you get overwhelmed and consumed by your own thoughts and a desire for perfection. Or she’s looking forward to some event, but we’re finding her at the point at which she’s realised that it’s not going to go how she imagined. 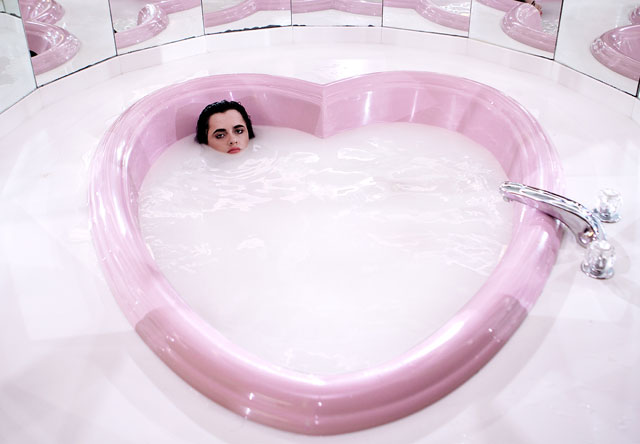 ES: You are also speaking to something wider at the moment. And I think that people probably identify with Joyce and her lonely beauty rituals.

JC: One hundred per cent. I think everybody can relate to her. I think that’s why my work has done well and it came at the same time as relatable humour on the internet, with memes and “mood right now” posts. Whenever I put something on Instagram, it will get reused straight away, which can be weird because it gets reused by people in the beauty industry, so loads of makeup brands and beauty brands will be like “Monday morning” and use one of my pictures. It’s fine, but it’s funny how feminism has been picked up by capitalism and sold back to us.

ES: Your work was exhibited in From Selfie to Self-Expression at the Saatchi Gallery. Did it meet with any negative press?

JC: Critics were asking why so many young women are so narcissistic these days – taking pictures of themselves all the time. You could tell that it was misogyny veiled as critique. People also think I’m a creepy guy and they’re very happy that they’ve found something they can get outraged about. I’m mainly thinking of male critics who have done this to me. They think I’m a man and they want to show how good they are for recognising and pointing out misogyny. Well done! Congratulations to you! When they find out that I’m a woman, they go: “Oh, even better, I can tell her how she is actually worse than any man. She is the misogynist. This woman is worse for women than men are for women.” This has happened to me before. They say, how can you be a feminist and do this and they start digging themselves into this hole. One critic said: “I look at that picture and I just see a nice arse, but how is a nice arse art?” I will fight them to the death when they try to make me jump through hoops, to prove that I’m a good feminist, not a bad one. Fuck the hoops. I just hit them over the head with the hoops. 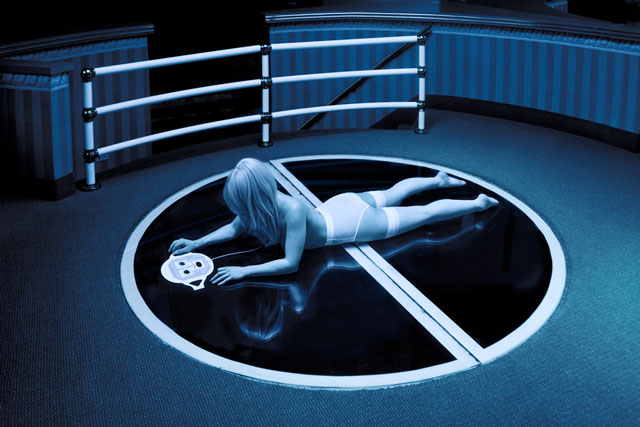 ES: Which images are they taking issue with?

JC: It’s the ones where I’m not obviously lampooning something, the ones that are quite seductive and the humour is perhaps a bit subtler. The one he was talking about is called A Solitary Love Affair. It’s all blue and I’m lying on my front. It could be from a science fiction film. They can’t handle that something is just arousing. They think you don’t know what you’re doing, just a silly young girl with a camera.

ES: I find it amazing that they can’t recognise the irony.

ES: You use a lot of pink in your work. Is it a handy shortcut to a particular stereotype of femininity?

JC: I just love it. My bedroom was always pink. And then you realise that everyone hates you for loving a colour. The men in my family would try to embarrass me for enjoying my own femininity. When I read girls’ magazines, my brother would snatch them off me and read them out loud and my dad would crack up laughing. Your little feminine world would just get ruined. And then you realise that this is a weapon. This is a thing that makes people really annoyed. And then I realised as a teenager that there was something rebellious about wearing Barbie stuff. I’ll be a Barbie, but I’ll be a fuck-you Barbie. People call it millennial pink now. Have you noticed that millions of companies now have pink logos? It’s a very satisfying colour. It’s nicer than grey!