Remembered for the moving scenes of the first world war he painted as an official war artist and the gentle English landscapes he painted on his return, he was also a masterful illustrator 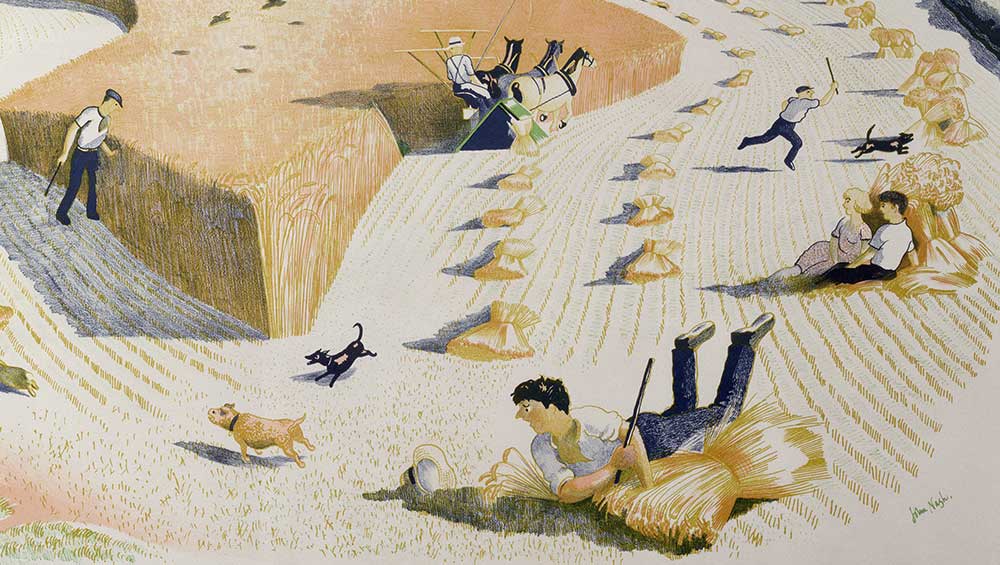 The paintings that John Nash made as an official war artist are among his most affecting. Considering the horrors he witnessed in the trenches, it is no surprise that he sought solace in the English landscape after the first world war. Though, as this long overdue retrospective at Compton Verney demonstrates, a love of nature characterised his career as painter, printmaker, book illustrator and graphic artist from the start. Remarkably, this is the first major exhibition of Nash’s work since the Royal Academy’s huge survey of 1967. Back then, when the London art world was in thrall to radical new approaches to art-making, his oeuvre must have appeared hopelessly stale, which perhaps accounts for its relative neglect ever since. Here, then, is a welcome opportunity to reassess his contribution to British art.

Born in London in 1893, John was the younger brother of the painter Paul Nash. Though not formally trained, he soon found himself moving in artistic circles thanks to the successful joint exhibition he staged with his brother in Kensington in 1913. Although now connected to London’s avant-garde scene, Nash produced gentle, rural canvases such as A Gloucestershire Landscape (1914) and The Viaduct (c1916), whose patchwork of fields and trees is intersected by a speeding steam train. These early works, which open the exhibition, display Nash’s tendency to flatten and schematise the landscape with an almost childlike naivety, a trait that is recognisable throughout his work. 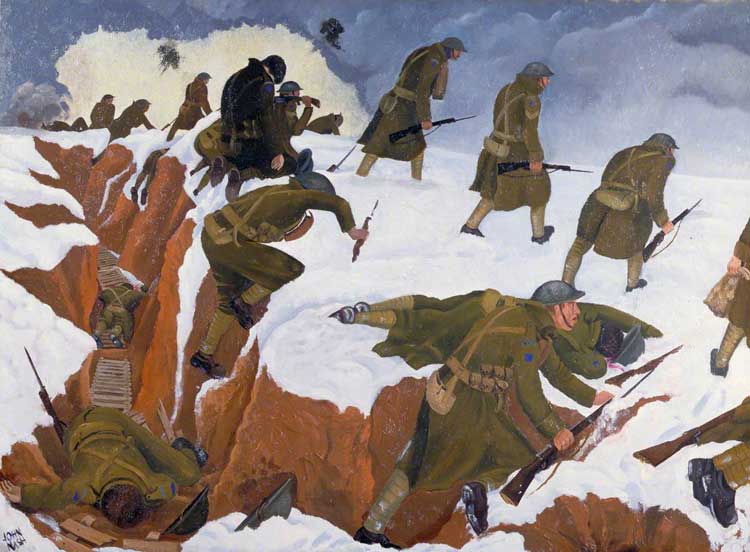 In 1916, Nash enlisted with the 1st Artists’ Rifles and found himself in France, enduring 14 months of exhaustion and despondency as he became “calloused to horror”. His time in Flanders inspired several paintings, including Over the Top (1918), which commemorates his unit’s involvement in a disastrous attack that occurred on a cold December morning at Welsh Ridge near Marcoing. Amid snow and mist, soldiers in heavy overcoats are shown scrambling out of their muddy trench into a hail of machine-gun fire. It is a brutal yet moving homage to the men who lost their lives that day – of the 80 in Nash’s company, 68 were killed or wounded during the first few minutes. He was one of 12 survivors. Recalling the dreadful experience in later life, he described it as “pure bloody murder”.

Over the Top was painted from memory in a herb-drying shed in Buckinghamshire, a temporary studio that Nash shared with his brother. Both painters were employed as official war artists and several of Paul’s masterful war paintings are also included in the exhibition. In the evenings, to escape their oppressive war-related commissions, they worked on their own projects. One was The Cornfield (1918), which Nash painted “in sheer relief at being still alive and in the English countryside”. Depicting the long shadows cast by the evening sun across a field of golden corn, it is one of his finest landscapes.

After the war, opportunities for exhibiting were sporadic and sales occasional. To compensate, Nash juggled his painting practice with commercial projects, such as producing illustrations for books and, in 1936, he authored and illustrated the Shell Guide to Buckinghamshire. It was in the interwar years that he began wood engraving, and a generous selection of inky prints are included here, such as Threshing (1922), a scene of bygone rural life brimming with lively detail. The 20 illustrations for the 1927 book Poisonous Plants, Deadly, Dangerous and Suspect are especially striking. His depiction of deadly nightshade demonstrates a clear mastery of the medium and it is not hard to see why the series is regarded as one of the pinnacles of 20th-century wood engraving.

Nash’s life was marked by trauma and poor mental health, which dogged him from an early age. When he was a child, his mother developed bipolar disorder and her mood swings became so severe that she attacked him with a knife when he was 11, an episode that saw her confined in a private sanatorium. Naturally, his experiences in the first world war had a profound effect on him, though “Colonel Depression”, as he described it, was a familiar companion even before his time in the trenches. Later in the exhibition, we learn that his only child, William, tragically died in 1935 after falling from the family car. This harrowing event led him to abandon several projects, including the unfinished watercolour Bures Mill, Suffolk (1935).

When the second world war broke out, Nash was again appointed as an official war artist, initially attached to the navy. This led to some rather lacklustre paintings of naval vessels and a feeling of despondency and frustration at being merely a spectator. However, in 1940, while in Swansea, he was caught up in an air raid that set the docks ablaze. Throwing himself into the firefighting efforts, he later painted A Dockyard Fire (1940) from memory; the dramatic scene records the unfolding drama with leaping flames, billowing smoke and gushing hoses.

The postwar years were comparatively sedate, with Nash increasingly preoccupied with the British landscape. Among the many oil paintings on display are scenes of rural Essex, Norfolk, Suffolk and North Wales. These are pleasant enough but ultimately insipid. The exception being Winter Landscape, from the early 1950s. Filled with lively, dynamic brushwork, this snowy watercolour with its undulating topography lends the adjacent oils a certain stodginess. Indeed, Nash himself began to doubt his abilities and, after asking the painter Edward Bawden for advice, was told: “Go back to the essential JN which is preserved in the early work … in those early days you had a much more obvious interest in rhythm which nowadays is less noticeable because of the ‘conscience’ you have for naturalistic detail.”

Where Nash excels in the postwar years is in the field of illustration, and the exhibition ends with a marvellous selection of book covers, prints and other works on paper, including the charming rural scenes for the Benhams publishing company’s 1958 trade calendar. Also on display are the uncharacteristic cartoons produced for Guinness in 1957, inspired by Edward Lear’s limericks. But it is his botanical illustrations for publications such as Robert Gathorne-Hardy’s The Native Garden (1961) that really shine. In 1948, he was both author and artist for English Garden Flowers, a project that he had been attempting to get off the ground for nearly a decade, though the roots of it stretch back to childhood. Based on the evidence here, Nash’s graphic work could have been the subject of a separate show. Paul may be the best remembered of the Nash brothers, but John was undoubtedly among the best horticultural draughtsmen of his era.