It is extraordinary in the early 21st century to be in the city of London looking at the work of an Australian Aboriginal artist who grew up as a hunter-gatherer in the Great Sandy Desert, acquired his art skills in prison, married his clinical psychologist there, and went on to become an artist of international acclaim.

Since Jimmy Pike’s untimely death in 2002, aged 62, his widow, the British writer and environmental campaigner Pat Lowe has lodged a large collection of Pike’s drawings with the Berndt Museum of Anthropology at the University of Western Australia, Perth. Artlines: You Call it Desert, We Used to Live There is a collection of drawings that capture the immediately recognisable work as one of the most important Australian Aboriginal artists. The London retrospective is the final exhibition of a modern master; once dispersed, these works will be seen together again only if the National Gallery of Australia, for example, mounts a major retrospective. Powerful and inspirational, this show offers a rare opportunity for a British audience to experience another worldview.

Six main themes can be identified in Pike’s work: Creation stories, country, stars, flowers, spirit beings and the modern world. It is the manner in which Pike facilitated the dichotomous elements of his own life that empowered him to make poignant and marvellous observations about the essence of life itself. It is a rare privilege to enter his world, and in this process it is the expertise and passion for enabling visionary work to be shown outside of a normal context that dealer Rebecca Hossack excels at. Hossack and Lowe have curated this retrospective exhibition of paintings and drawings. It includes more than 40 of Pike’s works, including two 10 metre paintings of ghost gums, carvings that have not been exhibited before, and works from the Berndt collection.

Pike was born at Japingka in the Great Sandy Desert around 1940. Among his tribal nomad family, there was no contact with white people. His was among the very last group of Walmajarri people to walk out of the desert in the 1950s, settling on Cherrabun Station where Pike worked as a stockman. Lowe explains: “Despite their isolation from the modern world, the Walmajarri people had heard something about it. Although they had never seen a wheel, they had seen aeroplanes, which flew high across the desert, sometimes at night. They knew that strangers flew in them, and that these same people were engaged in a war with enemies from overseas; such news travels, even to the desert”.1

The migration from a traditional nomad existence to one dictated by white society was inevitably traumatic and problematic. The art of Aborigines in this context “pronounces the burden of gadiya (white man) oppression and control, yet proclaims the regenerative power of Kimberley Aboriginal culture”.2 From the 1880s, colonist pastoralists and government agents carried out appalling policies, tantamount to those of the slave trade in America; massacres and ethnic cleansing were part and parcel of the early history of white Australia. Where Christian missionaries believed their policies were altruistic, their attitudes still subjected Aborigines to terrible conditions, to enslavement, cruelty and injustice. Traditional landowners lost their sovereignty over land in the 1880s; sacred sites were thus destroyed (through clearing of land for farming and mining), causing profound anguish to the original inhabitants. Art by Australian Aborigines has been an essential tool for the assertion of land rights: the passionate call for land rights underlies most Aboriginal art from the Kimberley region (north of Western Australia). Ownership of their sacred lands (country) is key to the survival of language and ritual law, which derives from access to ancestral land.

The drastic and irreversible change that took place in the lives of Pike and fellow Aborigines had inevitable ramifications. Alcohol led to manifold problems for individuals and whole communities. Pike was jailed for a series of minor offences and, in 1980, was convicted of murder, following a drunken fight. In Fremantle prison, he attended art classes and was introduced to linocut methods. His response, according to his teachers, Stephen Culley and David Wroth, was astonishing. Wroth observed that overnight he created three works that possessed “all the raw energy of European expressionist painters. He didn’t need me to teach him; he’d done a lot of wood carving and was very skilled, so he used the cutting tool in the way he would a penknife through wood, cutting left, then right in a zigzag fashion. His lines had that jagged look that gave them life.”3 The National Gallery of Australia duly acquired these, his first linocuts.

Exhibitions at Fremantle Prison attracted keen buyers; Culley and Wroth subsequently established Desert Designs (and an art gallery called Japingka, after his birthplace) transferring Pike’s designs on to fabric, which were then used for fashion ranges in Japan, the US and Europe. “Pike first tried his hand at landscapes like those painted by his peers, but then branched out and developed his own style. His subject matter was almost exclusively his country, its waterholes, stories, animal and spirit life, but occasionally he painted contemporary themes, such as his first impression of the city as seen through the back window of a prison escort vehicle. Later, he would paint cars, road trains, aeroplanes and the like in his inimitable bold style, with little concern for realism, perspective or visual accuracy. He displayed a natural flair for colour and design.”4

One of the earliest initiatives was to reproduce painted forms of indigenous art, where the works were accompanied by an explanation of the meaning of the land that inspired it. It was an important aspect of consciousness-raising and assertion of Aboriginal culture in the 1980s that is ongoing.

After six and a half years in Fremantle Prison, Pike was transferred to Broome, where British-born Lowe was working as a psychologist. While Pike was on parole, they left the town for a three-year sojourn in the Great Sandy Desert, 200 km from Broome. Lowe wrote extensive descriptions of desert life, language and culture, sourced from Pike’s remarkable knowledge. They were duly published in a series of six books. Pike’s intricate artworks using felt pens and a riot of colour inspired Lowe’s writing.

Pike was unusual in his love of drawing in a European sense and style (he used felt pens extensively), for most Aboriginal art is painted direct. It should be borne in mind, however, that, according to Judith Ryan, senior curator of indigenous art at the National Gallery of Victoria in Melbourne, and many Aboriginal artists and commentators: “All Aboriginal art is drawing.”5 Certainly his work captures an essential life force direct from his subject matter, the very directness of the drawn line connecting with a knowledge and spirituality at the core of the Aboriginal relationship to the land. Pike continued to be involved in traditional aspects of his culture, devoting several weeks of every year to attending traditional ceremonies, in the area where he grew up. He used modern materials though: acrylic paint on canvas. Lowe recalls: “He would cover a sheet of canvas with a layer of paint in one colour and leave it to dry. He would then take a paintbrush and depict a landscape or some figures. When the figures were complete, Jimmy would cover the background with dots, freely painted parallel lines or some other texture, in a different colour from the background. The layering gave an impression of depth. I never saw Jimmy hesitate before he started painting. He’d pick up his brush and apply the paint with confidence”.6

Unlike many Aborigines who succumbed to the tragedy of life on the fringes of white society, Pike was able to recover by drawing strength from his traditional relationship to the land, his encyclopaedic knowledge of his people’s history and the sense of belonging that that implied. It enabled him to recharge spiritually and artistically as an individual and to use the strength and knowledge to make art of a profound and life-affirming nature. In this, his unique partnership with Lowe provided a vital source of affirmation. Rebecca Hossack has presented the art world here in London with a rare and ambitious collection of his work, enabling a European audience to experience another conception of life. 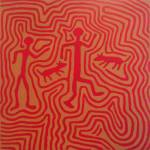 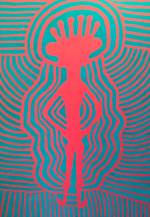 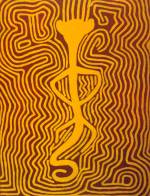 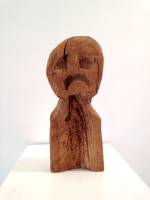 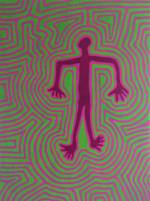 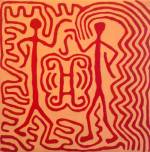 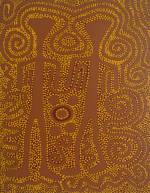