GW Bot interview: ‘Living and working in Australia has meant coming to terms with the country in one’s own way’

GW Bot interview: ‘Living and working in Australia has meant coming to terms with the country in one’s own way’

GW Bot lives in Canberra, Australia’s bush capital, with the Brindabella Range on one side and suburbia on the other. She observes in the landscape a language through which she seeks to capture, translate and comprehend the unknowable aspects of life.

The signs and symbols that have developed in Bot’s work, which she calls “glyphs”, form a calligraphic language, from which she creates a visual poetry. Her work was included in the Royal Academy’s exhibition Australia in 2013.

Janet McKenzie: Can you explain what it was that prompted you to choose GW Bot as an artist’s name?

GW Bot: According to Aboriginal totemic belief, each member of a clan inherits a totemic relationship with a particular plant or animal of the region. I like this idea of oneness with the environment. Where I live, wombats are especially prevalent and they have become my totemic animal. The earliest written reference to a wombat occurs in a French source, where it is called “le grand Wam Bot”, hence my exhibiting name GW Bot.

JMcK: Last year’s Australia exhibition at the Royal Academy, in which your work was included, revealed that Australia had changed greatly, in line with a growing appreciation of indigenous art and culture. Can you explain your experience of these changes?

GWB: For me, personally, there has been no change. Living and working in Australia has meant coming to terms with the country in one’s own way. As a visual artist, this experience involves a number of things, among them the vastness of the landscape itself and the visual expression of fellow artists, both indigenous and non-indigenous – it is not a question of these things being separate but rather part of the whole.

JMcK: The reaction to the London show indicated that perhaps Australia has not revealed its most recent and significant cultural shift to the world at large, in contrast to the way that Australian artists in the 1960s managed to. That seems anachronistic given that there are now so many international art fairs and biennales and increased travel. In your view, why is it that there seems to be a gap in awareness of how Australia as a nation and culture has evolved in the past 30 years?

GWB: The best way I can answer this question is to say there is the constant tyranny of distance for artists living in Australia. There are huge costs involved in moving art works halfway around the world in order to participate in exhibitions, biennales and art fairs. Indeed, Australia at the Royal Academy took the curator, Kathleen Soriano, who was then director of exhibitions at the Royal Academy of Arts, London, more than a decade to pull together.

JMcK: Glyphs are central to your work. Can you explain their meaning and significance?

GWB: Working for several decades in the Australian landscape, I have devised a type of alphabet or language, a system of marks, which I have drawn from many thousands of quick sketches that I have made in the landscape. These markings I call “glyphs” or sometimes “Austral glyphs”, denoting their antipodean origins.

JMcK: Australians has an enviable climate, but Australians also live at the mercy of dramatic storms, floods, droughts and bushfires. How does your art act as an indicator for the unique sense of place in the landscape?

GWB: A peculiarity of the Australian landscape is its constant change in language from fires to floods and droughts. There are many ways an artist can respond to these moods. Sometimes in drought, the use of watercolour takes on a new significance – water is a scarce commodity. Combined with pigments from the earth, dry and drying might become an act of hope in the face of hopelessness.

JMcK: Who are the artists in Australia who have most influenced your work?

GWB: Influences are many and varied. Two residencies at Arthur Boyd’s properties in New South Wales, which he generously gifted to the nation, the first at Riversdale on the Shoalhaven river, the second, at Bundanon just a bit upstream, taught me the generosity of spirit he brought to his art and life, his humanism. Boyd had an innate belief in other artists’ creative potential. Riversdale taught me about my Australian garden, Bundanon about the Australian wilderness. Rover Thomas taught me about the colour black – in the west, as with the ever moodier, blacker paintings of Rothko,; black is the colour of death. In Australia, it is the colour of regeneration – after the fire, the landscape blossoms with life.

JMcK: Which artists in the European tradition do you most admire?

GWB: Influences are many and varied. They include Russian icons, Byzantine mosaics and frescoes, Malevich, Rothko and Matisse. The St Ives group including Barbara Hepworth and Ben Nicholson showed me the importance of their landscape to their art.

JMcK: You have recently been making large works in steel. What do they contribute to your oeuvre? What qualities does steel introduce to your lexicon of forms?

GWB: The first set of steel glyphs, Treaty Glyphs (2013), were shown in Darwin last year in an exhibition called Treaty, yeah at the Chan Contemporary Art Space, curated by Maurice O’Riordan. They are now housed in one of the courtyards at Australian Galleries in Sydney awaiting a home. The tallest glyph is 136cm high – dimensions are variable for the width, the courtyard space is approximately 7 metres in length. The second set, Glyphs – Between Worlds (2013) was shown earlier this year at Australian Galleries, Sydney at my solo show of the same name.

JMcK: How are they made?

GWB: The glyphs are cut from sheets of mild steel with a plasma cutter. The edges are then smoothed with an angle grinder. Bolt heads are welded on to the back of each glyph, into which stainless steel rods are threaded having been cut down to a decided length, for example 10cm. I then put them into the garden to rust – covering them with a variety of soils and leaf litter, which have differing effects on rusting. The process can be hastened with salt, which produces a beautiful orange colour. Hydrochloric acid can be used also, but it is such a nasty substance that I try to avoid it (environmental consciousness?). Over time in the elements, the rusting process turns the steel into a deep ruby brown-red colour – Cor-Ten steel already has this patination, but is two to three times the cost of mild steel. When ready, they are installed on a wall. Holes are drilled to the size of the stainless steel rods. The rods fit in and with a, for example 10cm distance from the wall,; the glyphs cast their shadows. The space of the wall determines the overall dimensions of length.

The glyphs are relief sculptures (or steel drawings). There are all sorts of languages cut into the steel shapes, which also cast their own tiny shadow stories on to the wall and the placement of each glyph in relation to each other sets up a conversation or dance between them all. The tree of life theme is used a lot. When the poet Kevin Gilbert, a friend of mine, of the Wiradjuri, Kamilaroi nations, was dying, he asked me to plant a tree every year after he died. My trees are now of steel, such an iconic material for Australia, steel being a refined iron. Kevin was very instrumental in my thinking of what it might mean to be an artist in Australia – what is this land I live on and in? He wrote in his poem Bringing Them Home, a refrain: “Until you hear the throb of blood inside a stone, I cannot bring you home.”

There is also a reference to the Christian Tree of Life – the Crucifixion. Steel is such an iconic material for Australia, steel being a refined version of iron. Bits of it lie scattered all over the landscape, reminders of past lives. The rusting process is a reminder of our own transience on Earth, the earthiness of the rust colour a reminder of the Earth we live on. I love the fact that it comes from materials within the Earth – it’s like working with the core of oneself.

JMcK: What is mild steel?

GWB: Mild steel – black mild steel – also known as plain-carbon steel, is the most common form of steel because its price is relatively low. Chemically, it is made up of carbon, silicon, manganese, sulphur and phosphorus in varying quantities. It is mostly used for welding: both industrially and by artists. Inspiration has come to me more by the Byzantine, Romanesque and Gothic relief sculptures and closer to home, found fragments of iron cooking utensils and farm machinery from the 19th century found in paddocks and the surrounds of old country towns.

JMcK: Printmaking underpins your work; what is it about the processes and materials in printmaking that most appeals to your sensibility and to the ideas you seek to explore?

GWB: My preferred printmaking technique is the linocut. I love the stark simplicity that is one of its inherent qualities, more like a poem than a novel. Linocuts belong to the family of relief prints, as do woodcuts, and have a long tradition of use in the west and the east. I have always approached the cutting as a form of relief sculpture, where the shadow behind the object in relief, the uncut depth, can add a quality to thinking about paper, both the surface and what can grow from beneath the paper. It is like working with the surface of the Earth and deep time buried within. It is a timeless process. 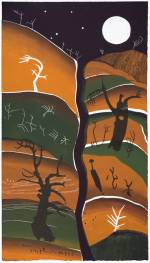