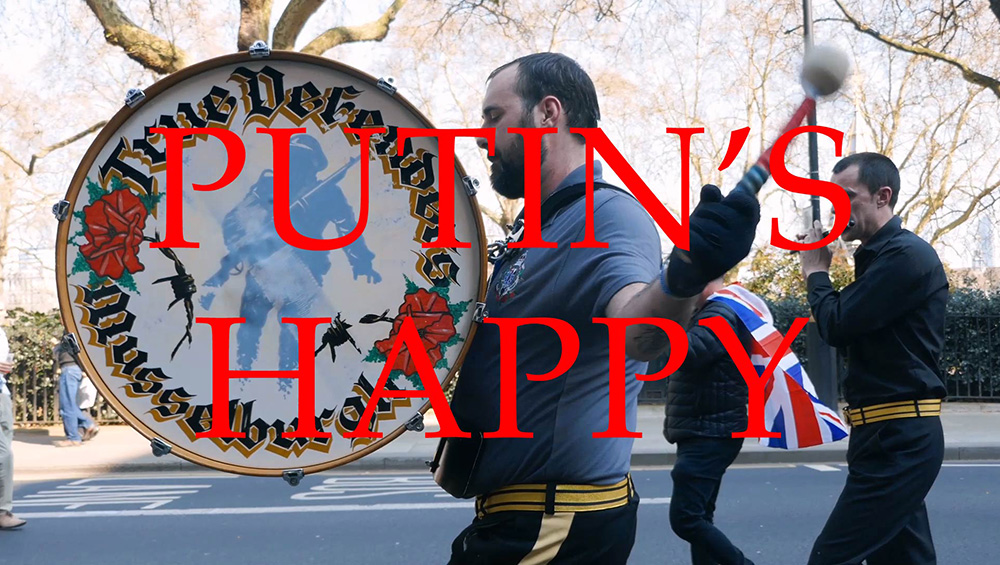 With the possibility that Theresa May could call a snap election and the UK’s age-old political certainties and allegiances unravelling under the malign influence of Brexit, there could hardly have been a richer smörgåsbord for British folk culture fan Jeremy Deller to sample from, as he strolled around the UK’s seat of government with his camera. Here, over the spring and summer of 2019, he found a medieval pageant’s-worth of protesters, bristling with the kind of flotsam he loves to document: a motley melange of people with banners, flags, placards, uniforms – even tattoos - all shouting their political messages and slogans in a colourful, graphic cacophony. They have been collaged together in this 42-minute film, Putin’s Happy, which the enterprising south-east London gallerist Hannah Barry has shoehorned into her schedule just in time to seep into our consciousness over the month running up to the general election on 12 December. “Thoroughly depressing,” promises the Art Review summary, reprinted on the poster. What an enticement. 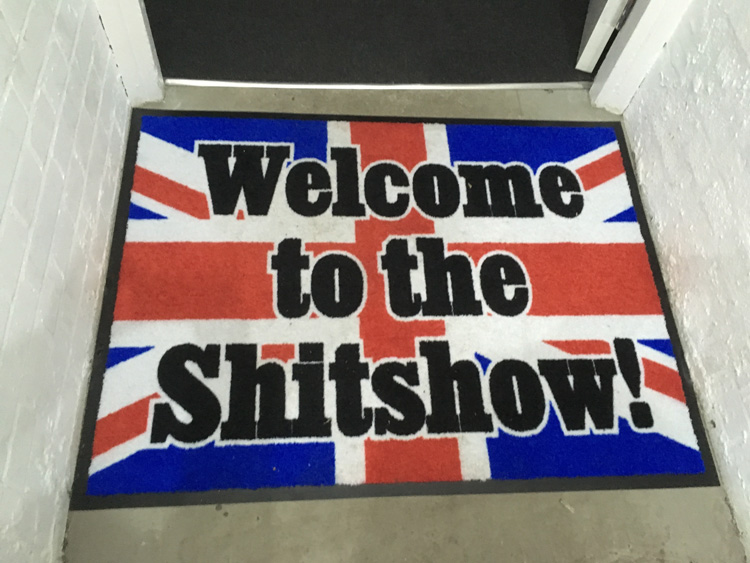 Juxtaposed against the visual exuberance of flapping flags and colourful banners, the weirdness and toxicity of extremist exclamations and slogans is layered over the interviews Deller and his crew collected while roaming around Parliament Square. Deller has often delved into the nation’s fondness for magical thinking and myths, most famously in his installation English Magic, for the British pavilion at the 55th Venice Biennale. Here, there is plenty of the delusional nonsense he likes to expose, although, on this occasion, little palpable affection for it. One particularly choice placard name-checks Ukip’s founder, Nigel Farage, the popularity of whose single-issue policy of leaving the EU drove the Conservative party to hold that fateful EU-membership referendum. On a cardboard background, the writing declares: “Nigel Farage was sent by Christ to get Britain out of Europe and fulfill [sic] Bible prophecy.” I don’t need to unpick the multiple nonsenses embedded in that sentence for you.

If Deller’s camera lingers overwhelmingly on the far right and its cousins in extremism and eccentricity, it is because he made the film earlier this year for a Viennese art festival, Steirischer Herbst, which commissioned this and other new works under the title Grand Hotel Abyss. It serves that theme well in revealing the pernicious influence of populism in the UK (an affliction that has also run rampant in Austria for decades) in all its breadth and diversity. Deller described it as a “postcard from the UK” at the London opening. But in the context of a forthcoming election, that one-sidedness does not sit so well.

However, Deller always wears his politics on his sleeve – or in this case, on his T-shirt, having launched the popular Fuck Brexit T-shirt range for gallery Studio Voltaire two years ago. There is little in the way of dissenting, rational voices, though the people he gives that platform to are well chosen: a bunch of British Asian teenagers who muse, good-naturedly, on the craziness around them and how wedded they are to their identity as British, while reflecting on the rise of open racism since the referendum vote; and a Sikh TV reporter, wearing a vibrant red suit and turban, who suggests that the sentiments displayed by these protesters “appear to be removed from the facts of Brexit”. Indeed. Facts have little to do with what is going on here, as one particularly colourful character demonstrates, as he explains the design of his flag with a conspiracy story around deposed royalty, misplaced fortunes and how the reinstatement of some dubious monarch nobody has heard of would mean free solar energy for all.

Deller seems to have gone out filming only on summer days, which enhances the freaky carnival atmosphere. And he milks those moments, allowing us to gaze in puzzlement at a pair of plump, white, middle-aged Brexiters in hi-vis vests gently bop along to the reggae rhythms of Bob Marley’s human rights anthem, Get Up, Stand Up, a song written while Marley was touring Haiti, in protest at the island’s poverty and deprivation. Oh, the irony: well-fed, white, British people protesting against the “injustices” the dithering politicians have visited on them by using Marley’s song, while the film is screening here in Peckham – one of London’s bastions of black British culture – is a potent cocktail of ingredients; its aftereffects are almost overpowering.

While the interviews Deller conducts - usually from behind the camera – range from hilarious to downright disturbing, it is the moments of wordless contemplation that linger longest. Sometimes these silences are alleviated by text, such as one standout scene where the camera freeze-frames the raised, tattooed arm of a far-right, shaven-headed extremist, to explain in hasty graphic scribbles all the sinister sources of the messages and markings scrawled on his skin. Most profound of all, perhaps, is the five minutes of wordless wonder towards the end of the film, taken during the Brexit Betrayal March on 29 March 2019, while a group of black-shirted men and boys marches through the streets, banging drums, twirling sticks, waving banners and proudly evoking the black-shirted horrors of Oswald Mosley, the politician who, in 1932, established the British Union of Fascists and marched his black-shirted brigades of supporters through London’s East End to protest against immigration.

What the film reveals particularly well (and to depressing effect) is how the Brexit bandwagon has allowed a huge range of people to foreground their peculiar views, gaining friends and momentum on social media, supporting each other in an isolated bubble of nonsense. When Deller asks his interviewees their opinions of the more mainstream media, they dismiss them as “rubbish” and “full of lies”. One woman gaily admits to getting all her news from the state-run Russian TV. Which brings us to the title of the film: Putin’s Happy. Given the rumours that Putin would like nothing better than to see the trading strength of the EU crumble into dust, not to mention the suppression in recent weeks of a UK government report on possible Russian interference in the last election, we can only assume that Deller’s title is probably right.