Jennifer Campbell and Chloë Manasseh: ‘We’re both interested in the temporal state of the landscape’

Jennifer Campbell and Chloë Manasseh: ‘We’re both interested in the temporal state of the landscape’

The artists talk about how they explore the conflicting psychological and physical states of being ‘grounded’, Manasseh through the diverse landscapes of the desert, and Campbell through the metropolis

Chloë Manasseh (b1990) and Jennifer Campbell (b1985) met in 2012 at the Slade School of Art on the MFA painting course. Sharing a space for their final degree show, they realised that, while diverse in many ways, their practices held many similarities, including a fascination with the textures of paint and a personal approach to the landscape.

Campbell prefers to call their collaboration a “pairing”; while they are more conceptually involved than just physically sharing a space, they still maintain complete individuality through process and style. The exhibition, titled Grounded, at the Transition Gallery presented their works side by side, addressing the relationship between the figure and the landscape.

Harriet Thorpe: Can you describe how you collaborated on this show?

Chloë Manasseh: The approach we both have to painting is very different, but we have a lot of overlapping concerns. We’re both interested in the temporal state of the landscape, just in very diverging ways. I’m interested in the power of the natural wilderness and landscape. Whereas Jenny is more interested in the modern state of our digital reality.

Jenny Campbell: For me, the modern landscape is overwhelming. It’s full of images and information – there are so many things you can be, see and identify with. London has become really important. For this exhibition, I was working from London, and Chloë was working from the desert.

CM: I was on a residency called the Joshua Tree Highlands Artist Residency in the middle of the Mojave desert in California. It was ideal for my practice because I always question whether there is something such as the wilderness, or even aloneness in reality. It almost feels like no ground has been untouched and with everything available to us in the reality we live in, you can look it up, imagine what it will be like and already have a preconception of what you’re going to experience.

HT: Does where you are in the world directly affect your work?

CM: Any other country I go to, away from England, will affect my work. I’ve got dual [Israeli/British] nationality so I’ve always had this conflicting idea of where I belong. I know it sounds like a bit of a cliché, but my family is all around the world, and everyone has had this sense of not really having a settled locality. London is very much a base. I don’t take inspiration from here, but I know I can work from here and reflect on everything I’ve seen. I’ll go travelling and integrate myself into a new place, then I’ll bring that back, deconstruct it in terms of memories and reduce the imagery into one recognisable form – which recently has been a tree, and, more specifically, a palm tree in this exhibition.

I almost completely take away the context, so the viewer has no geographical reference other than the fact that a palm tree may grow there. It’s disorientating, which is like how you remember something; imagination infiltrates that memory and changes entirely what you see, so it becomes more of an emotional response to what you know.

JC: Where I am feeds my work completely. My work would be completely different if I were to change context. It’s quite interesting how context dependency, not only as an artist but as a person, changes your sense of self. That really relates to the way I treat my paintings as installations. They are paintings, but they are affected by the space that they’re installed in. To me, Chloe’s works feel like windows into another space and I bounce off them in that way, I see them as framed and contained whereas mine are spilling out – so it all relates back to this idea of the self in the landscape, that border of the painting and the boundaries of the self.

CM: We inherently border everything, either with our camera phones or computer screens, even when I paint, which is why the work is so concerned with the edges and trying to get out of that. I see landscape being constantly in a state of flux and constantly changing. You can never border a landscape, you can never look at the same thing twice, it will never be exactly the same; things change over time.

HT: Do you experiment with context?

JC: I do it in the way that I source my imagery. I bought a book the other day, a vintage annual from the 50s, so I might be obsessed with that for a while. Another friend gave me a book on Princess Diana, so there’s always this element of chance. I’ll go to museums, such as the Fitzwilliam Museum in Cambridge or the Natural History Museum, or a marble sculpture show at the Tate – I don’t want to call it natural, but it’s whatever I happen to come across. The world is so big, I almost feel incapable of choosing, so I let things naturally pop out at me, which reflects the lack of control in this world. London is a really great illustration of the overall state of the western world.

CM: In California, it was the first time I was in a place where it took me a while to orientate myself. I’m quite a comfortable traveller, but living by myself in a house in a really remote place, it took me longer than I expected to feel at ease. I was also making work there, so I was surprised at how much my imagination was working overtime. I was living in the reality, but my imagination kept getting the better of me. I Headbutted a Yukka(2015), which is the orange painting, was painted just after I had just had to evacuate because of a fire. There was a big forest fire, which destroyed 300,000 acres of land. We could see it for a week before it changed direction to come towards me. I’m working on a series of film works called 100 Sounds, and I had just done one that night, in a cave in the middle of the desert, and you could see the fire overhead. The evacuation notice came at 2am and, when I came back, that painting just came out of it. It affected me more than I thought it would.

HT: Do you think the exhibition shows a positive or negative approach to the landscape?

CM: I have a very positive approach to the landscape, especially in the desert. I feel I experienced every attitude it had to offer, but it was in such a positive mindset. There was such a supportive network of people, you couldn’t help but take everything in your stride.

JC: That made sense to me looking at that painting of yours. Obviously, it was awful what happened, but if you step back from that and simplify it as a symbol for change – I think that painting shows the power of sudden change. That’s why I’m interested in the word “grounded” in this contradicting sense. I don’t ever want to dictate that someone should feel positive or negative, nothing is ever that simple.

In the work 30 Minutes (2015), [the painting] looks like a hospital bed, but it could also be a sunbed. You might be on a sunbed for 30 minutes, but I was also waiting for an operation for 30 minutes. I was thinking about the stability of being grounded or the fear of being grounded or stuck. The other piece, Grandmars (2015), is about my grandma losing her house. She is so externally grounded with her personality now because her memory is failing, her sense of identity is so embedded within the house, so that will actually take a chunk of her away.

HT: What is your interest in the figure, within this landscape?

JC: In a way, I think of all my works as the same figure in different moments. One is a teenager who is very outward-facing, being aware of everyone watching them; the other two are both of Little Edie, from the documentary Grey Gardens. It is a fly-on-the-wall documentary from the 70s about a mother and daughter who live in a decaying old mansion. Their personalities are so strong, because they have been isolated in this house for so long: they only see a gardener and a handyman. Little Edie, as she is called, has her moment to shine, as if she has been waiting all this time to express herself. I was thinking about paintings and their awareness of the audience and how a sense of identity can be confirmed by an exterior view. Also, as a group, the works map a changing identity, in some moments showing off, in some moments being more introspective, which is what the abstract works represent for me, where abstract art means an internal view of the self.

CM: What really interests me about landscape is being able to orient yourself in it, or find balance in a new environment. Bruce Chatwin wrote a book called The Songlines (1987) about the Aboriginals in Australia and how they can navigate any wilderness by singing one of the creation songs in line with their steps – they could cross a featureless desert landscape using just the rhythm of a song. And the Japanese haiku poet Matsuo Basho wandered through the wilderness writing haiku. These people got me interested in how different people navigate different landscapes, which is why I do film work as well as painting. The film work almost helps me navigate, because I start filming the moment I arrive, collaborate with local people there. Through that, I can be grounded.

JC: That’s where Chloe and I have a similar attitude to landscape, which relates to the figure in the landscape, which is very much a psychological state of being. I came into painting fairly blind, I came from sculpture, then made installations, which then became installations covered in paint. I knew about sculpture and the history of that, but coming in suddenly to all this great history of painting has been very useful because I have had to be quite reckless with it.

Those old portraiture paintings interest me. Some of them were just like a job application or a CV, like, “Here’s me. I’ve got skin so pale you can see my veins, I’m standing here in my landscape that I own”, as if they are showing off. I like bringing humour to the history of painting because people take painting so seriously. There’s this status that needs to be a little bit more self-aware, which is why I talk about my paintings knowing that they are going to be looked at, or expecting an audience, because otherwise it is like pretending the audience doesn’t matter.

CM: I think it’s really important to make work that isn’t isolating to the viewer. It’s important to have something that the viewer can latch on to, or engage with or read in to. 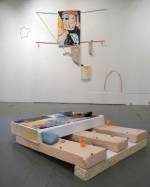 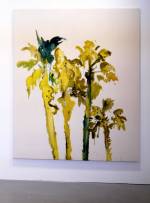