The French architect Jean Prouvé was a radical modernist whose graceful prefab buildings used cutting-edge techniques to further his socially progressive ideals. In an era of housing shortages and mass migration, his work is powerfully relevant – as this extraordinary exhibition demonstrates 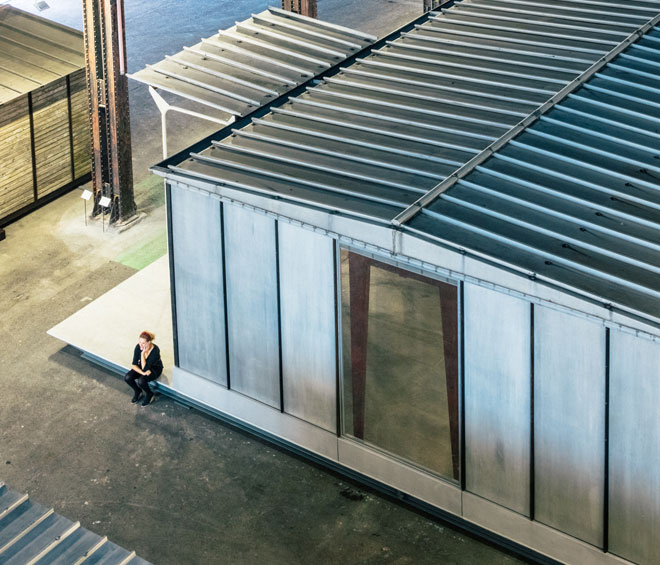 Jean Prouvé (1901-84) was an idealist, a prefab pioneer, a revolutionary. Starting out as a skilled artisan metalworker, he claimed that “in their construction, there is no difference between a piece of furniture and a house”, and went on to prove it. He was moved by the massive displacement of people during wartime to create elegant, economical structures for use as homes or shelters, made from prefabricated steel, aluminium, glass and wood components, and which could be assembled in hours. These dwellings were economical, practical and beautiful, too, as this exhibition demonstrates.

Determinedly modernist – he saw no impediment to blending art with industry – and, utterly contemporary in his thinking, Prouvé refused to distinguish between design, engineering and architecture. He explored all the technical resources of his time, soon abandoning the laborious procedures of wrought iron to play with bent and sheet steel, developing structures of great lightness and strength, thanks to pioneering initiatives such as his “hollow body” technique. He supplied countless schools, hospitals, universities and government departments with his wood and metal furniture – everything from chairs, tables and shelves to facade panels. Like so many design visionaries of the mid-20th century, he fell from view during the latter part of the century, but is now in the ascendant. His furniture, once available for cents in flea markets, is beyond the wallets of most people: his Trapeze refectory table sold for a record €1.3m at a recent Paris auction. But it is the provisional classrooms, homes and offices that this exhibition celebrates, preserved in large part thanks to Paris gallerist Patrick Seguin, who has dedicated the past 27 years to recovering and restoring what few buildings by Prouvé are left.

Single Prouvé buildings have been exhibited before – in Paris, New York, Los Angeles and London. But no other cultural venue could have hosted an exhibition of his structures on this scale. The Luma Arles, in Provence, philanthropist Maja Hoffman’s emerging arts campus housed in a sprawling former rail depot, has room enough – and plenty to spare – to place four of his iconic sculptural dwellings outside the main buildings, while eight have been reconstructed inside La Grande Halle, a vast exhibition space created from a 19th-century foundry. It is a fitting tribute to Prouvé’s early apprenticeship as a blacksmith.

Taking a stroll under the cathedral-like wrought-iron roof of this erstwhile manufacturing shed, one is immediately struck by the harmony and the elegant economy of the buildings, along with their craftsmanship and their diversity. Given how few of Prouvé’s structures survive, it is a fantastic selection. Some may be showing signs of wear or neglect, but the rusticated paint and woodwork, and patination of steel, add to their character. 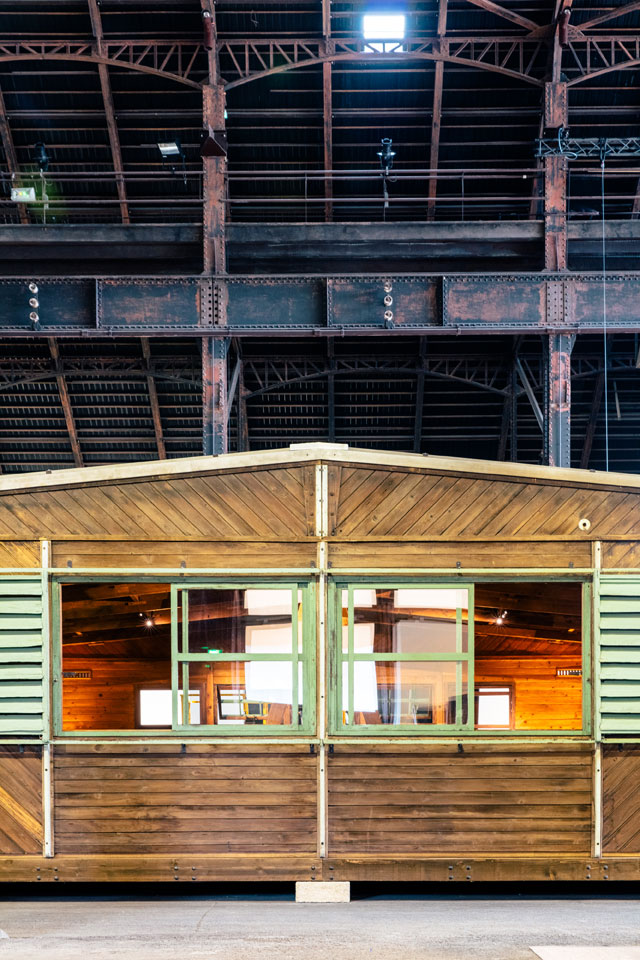 The Maison Démontable BCC (1941) is a wood and glass structure developed to respond to the scarcity of steel during wartime. It has a chalet-lite simplicity and offers ample views and ventilation from its multitude of openable windows, which are complemented with cheerful green shutters. There is the bentwood elegance and ships-cabin cuteness of the Maison des Jours Meilleurs (A House for Better Days) (1956), with its circular central shower pod. The architect Simon Allford of Allford Hall Monaghan Morris – a huge fan of Prouvé’s, whose new White Collar Factory building in London is as direct and sincere a tribute to Prouvé as you could hope to encounter – told me that this house was originally erected by the Seine in Paris in 48 hours, inspired by a call for help from Abbé Pierre, founder of the Emmaus movement, who had been appalled to hear that, in 1955, a woman had frozen to death on the streets of Paris. Compassion and egalitarianism were integral to Prouvé’s practice. 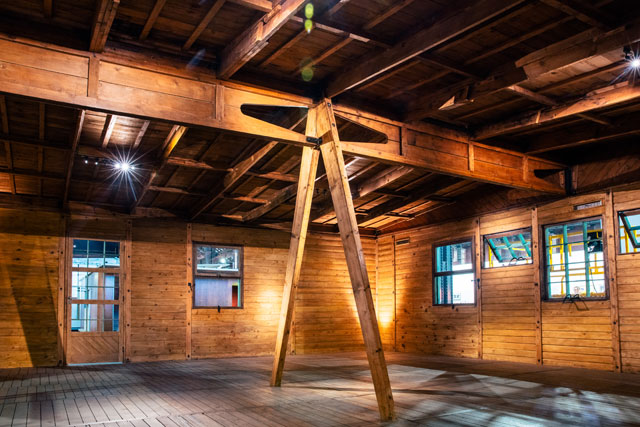 The house is set on a concrete plinth, so any feeling of transience evaporates, aided by a lovely detail: an external concrete lip extends about a foot up from its floor, offering a low-level seating platform that wraps around the structure’s outer wall.

Shimmering at the centre of the Grande Halle is a most impressive schoolroom, the École de Bouqueval (1949). Like something dropped from outer space, it is clad in aluminium panels punctuated with Prouvé’s trademark portholes. There is a smaller anteroom attached to the larger classroom, and both enjoy a fully glazed wall of French windows looking on to a veranda, which is shaded by a generous canopy. 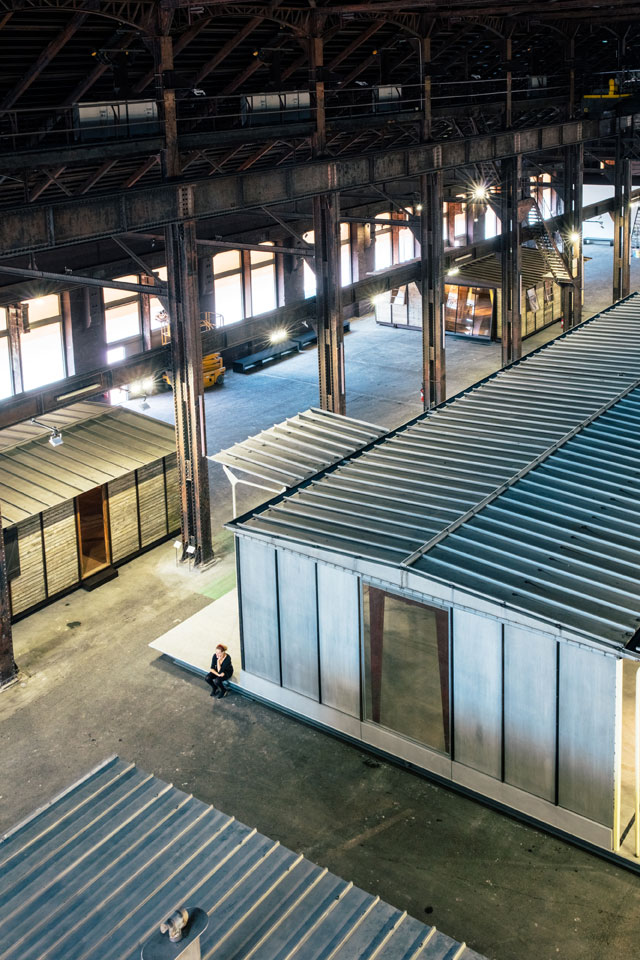 When working with so few elements, it is vital to make every ingredient count. Prouvé does this with each building’s distinctive, visible supporting arches: inverted Us or V-shapes, their legs taper down gracefully to their fixing slots. Painted red in this school – or yellow in the Maison Ferembal (1948), they add structure and sculpture, transforming basic open-plan interiors into  playful, stylish, characterful spaces – from flatpack house to work of art.

Prouvé worked alongside leading architects and designers such as Le Corbusier, Robert Mallet-Stevens, Pierre Jeanneret and Charlotte Perriand as furniture-maker and architectural collaborator, and there is a dominant Prouvé aesthetic to be seen throughout the many collaborations. As Mark Wigley, professor of architecture at Columbia University, said at the opening event in Arles: “You only understand Prouvé when you see [his structures] all together. That’s when you feel the brain of this guy.”

Sadly, the house that kickstarted his prefab revolution no longer exists. Responding to legislation mandating paid holidays for French workers in the 1930s, Prouvé created the BLPS (1937-39), a prefab steel holiday home weighing less than two tonnes, and measuring 3.3 square metres. However, one of the lightweight military shelters he designed for the French army (Baraque Militaire, 4x4, 1939) has survived. It is one of 300 such units ordered and built, and which could be joined together to house between four and 12 people. The one on show here ended up as the gatekeeper’s hut at the Ferembal factory in Prouvé’s home town of Nancy: it is displayed complete with the distinctively green bent-steel drop-arm barrier made to go with it by Ateliers Jean Prouvé.

The period of austerity after the second world war inspired Prouvé to ever greater experimentation and production. In 1945, he was commissioned to create prefabricated refugee houses, and in 1946, he moved his Ateliers Jean Prouvé operations to Maxéville, just outside Nancy. With a factory and a design studio he could combine research, prototype development and production –  furthering his ambition to transform the building process from a craft-based practice to that of a mechanised industry. Here, he developed the Tropical House, the ultimate lightweight aluminium structure, designed to maximise portability and ventilation. The prototype was exported to Niamey, Niger, and two more were commissioned and sent to Brazzaville, capital of what was then French Congo, in 1951. But the design did not appeal to the expatriate community and no more were made.

Prouvé was a man ahead of his time. Though he was subsequently commissioned to create prototypes of prefabricated public housing, and won competitions with his designs, the public wasn’t quite ready for that degree of provisionality in their homes, and sales never took off. He fell out with one of the principal backers at his factory and abandoned his Maxéville site in 1952. His actual Maxéville Design Office (1948) – one of his housing prototypes, which ended up becoming his HQ – is on show at Luma. More than 60 years later, and with housing shortages and mass migration at the top of the social agenda, it is extraordinary that these delightful, humanitarian, pragmatic solutions have not become the default option for temporary buildings. The exhibition text speaks of a “collective amnesia” afflicting the architectural and humanitarian worlds. But these quirky and personable designs, which seem so immensely appealing today, were perhaps too oddball for their times.

Prouvé’s commissions and collaborations continued, including the 1956 commission for a school complex at Villejuif, a Paris suburb. This gorgeous structure of red, Meccano-esque perforated steel sits proudly beside La Grande Halle, its cantilevered, laminated wood roof arcing over the fully glazed exterior. A more uplifting, appropriate solution to classroom requirements would be hard to imagine – and yet so many baby boomers spent the 1960s, 70s and 80s in more pedestrian, squat, workmanlike and often hideous school prefabs.

At a time when architects – and eminent architecture professors – are questioning the role and value of their profession and striving to find ways to offer solutions that bring caring into the creative process, it would be hard to imagine a better role model than Prouvé. His prime audience – his own profession – has finally caught up with him. 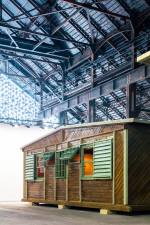 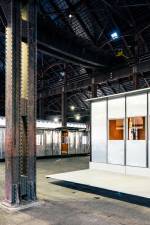 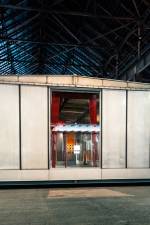 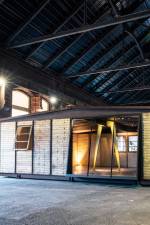