Dubuffet’s curiosity and playfulness with serious and complex ideas shines through in this show, which brings together more than 150 works from across four decades 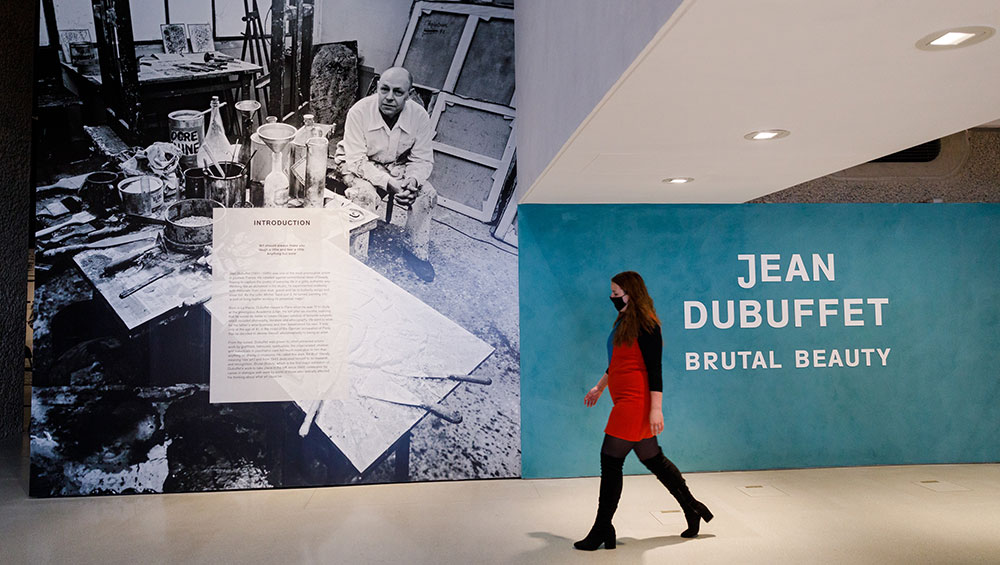 Jean Dubuffet: Brutal Beauty is a simply joyous exhibition to visit. This perhaps has something to do with it opening as we all emerge from yet another national lockdown, but it is not just that. It is more than 50 years since there has been a major survey of work by Dubuffet (1901-85) in the UK. That in itself is exciting, but still does not explain the appeal of this exhibition. That it is taking place at the Barbican Art Gallery is attractive, too – brutal beauty in a brutalist interior, what more could we ask for? Still, the artworks have to stand on their own merit and Dubuffet’s body of work here surely does that.

Bringing together more than 150 works from across four decades, Brutal Beauty engages with Dubuffet’s curiosity and playfulness with serious and complex ideas, ideas that make his work intriguing. There are portraits, lithographs, statues, enamel paintings, assemblages and enormous canvases. His curiosity is present in his material experiments with glass, dust, dirt, string and gravel. I expected to find the work deeply interesting, and it is. What I didn’t expect, despite the exhibition title, was to be caught unawares by the beauty of the work. The exhibition is helpfully structured around a number of themes that follow a loose chronology: matter and memory; true face; art brut; ladies’ bodies; mental landscapes; the garden; precarious life; Texturology; Paris circus; the collection returns; L’Hourloupe; Coucou Bazar; theatres of memory; and non-place.

The astute and witty portraits of Dubuffet’s friends and patrons are a joy. These began in 1945, when he made a series of portraits of his friend Jean Paulhan. Then, the wealthy American Florence Gould asked him to do portraits of some of her friends and acquaintances. Dubuffet said: “Funny noses, big mouths, crooked teeth, hairy ears, I’m not against all that.” And that is what he captures, not from life, but from close looking, then from memory. The portraits may be considered crude, but they aim to capture the essence of the people they portray.

There is a generosity in Dubuffet’s work and in his thinking, too. This is especially apparent in his collection of “art brut”, examples of which he collected throughout his life and are shown in two spaces dedicated to these artists in this exhibition. A helpful booklet is supplied in the exhibition space giving short biographies of the artists concerned and explaining something of how art brut, sometimes known as “outsider art”, engaged Dubuffet in thinking about what might be considered as art, and who can make it: “Millions of possibilities of expression exist outside the accepted cultural avenues.” From around 1945, he visited psychiatric institutions and, in 1948, was co-founder of the Compagnie de l’Art Brut, corresponded with those artists who interested him and collected their work. Included here is work by Miguel Hernandez (1893-1957), Laure Pigeon (1882-1965), Sylvain Lecocq (1900-1950) and others.

Begun in 1950, Dubuffet’s series of female nudes were some of his most controversial works. The convention of life drawing bemused him: “Nothing seems to be more false, more stupid, than the way students in an art class are placed in front of a completely nude woman … and stare at her for hours.” In contrast, his visceral fleshy landscapes show female bodies seemingly on the point of collapse. In these fluid textural images, their bodies disintegrate before our eyes. For instance, The Tree of Fluids (1950), from the Tate collection, presents an especially distorted female body that nonetheless continues to smile sweetly. The marble effect, we are told, is the result of Dubuffet’s experiments with zinc oxide and viscous varnish used in combination with oil paint.

Dubuffet’s mental landscapes are equally fascinating and, as this exhibition explains, the artist was not interested in depicting a particular place, or even an idealised one. Instead, he was interested in the conscious and unconscious mind as a landscape of sorts as we process our experiences of the world around us. The unusually high horizon line in these works urges us to attend to what is beneath the horizon, beneath the surface and occupying the unconscious mind. As something of a counterpoint, the artist’s Texturology paintings focus on the surface rather than beneath it. Begun in 1957, these are built on the basic tenet that modest materials, such as a soil or the pavement, are worthy of contemplation. I had not seen these up close before and was surprised by just how beautiful and captivating they are. Very different, but equally fascinating, are the images of colourful kaleidoscopic Paris street scenes. From Paris-Montparnasse (March 1961) to Caught in the Act (September 1961), he focused on the hustle and bustle of urban Paris as well as its darker side. 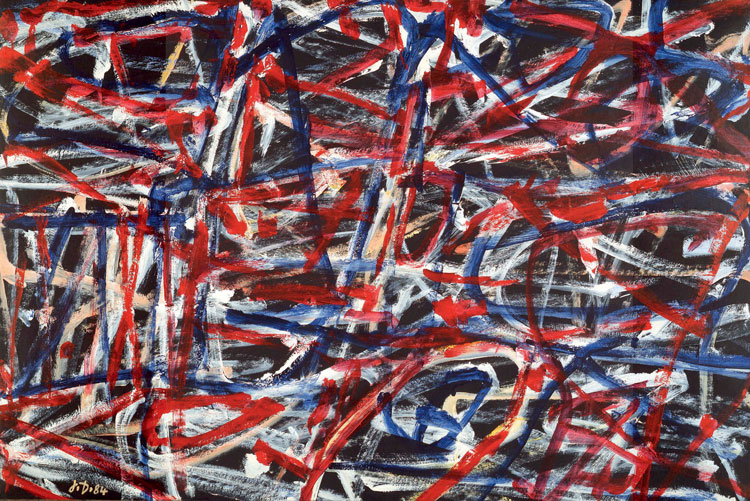 Covering four decades of work by an artist such as Dubuffet is no easy task and I have just scratched the surface of what is on offer in this exhibition. I haven’t yet mentioned the L’Hourloupe paintings or the Coucou Bazar “theatrical props” that take up much of the ground floor gallery space, and these bold and bright works did seem to capture visitors’ attention. His L’Hourloupe drawings began with Dubuffet using a four-colour ballpoint pen to doodle while on the telephone in 1962. From these humble and accidental beginnings, emerged a series of paintings, sculptures, environments and performances that endured for more than 12 years. Later, from 1971 to 1973, Dubuffet made freestanding elements based on his L’Hourloupework that he called “theatrical props”. These featured in his performance piece Coucou Bazar in New York in 1973.

In the archival video footage at the end of the exhibition, we hear Dubuffet in his own words. “Painting is a technique for acquiring knowledge, a way of seeing that is superior to mere sight,” he tells us, and we see him grinning from ear to ear, curious and playful to the end, an image that stays with us as we leave the exhibition.