Alberto Giacometti: A Line Through Time

Alberto Giacometti: A Line Through Time

This remarkable show traces Giacometti’s artistic career, displaying his works alongside those of some of his contemporaries and making clear his belief that drawing was the basis of everything 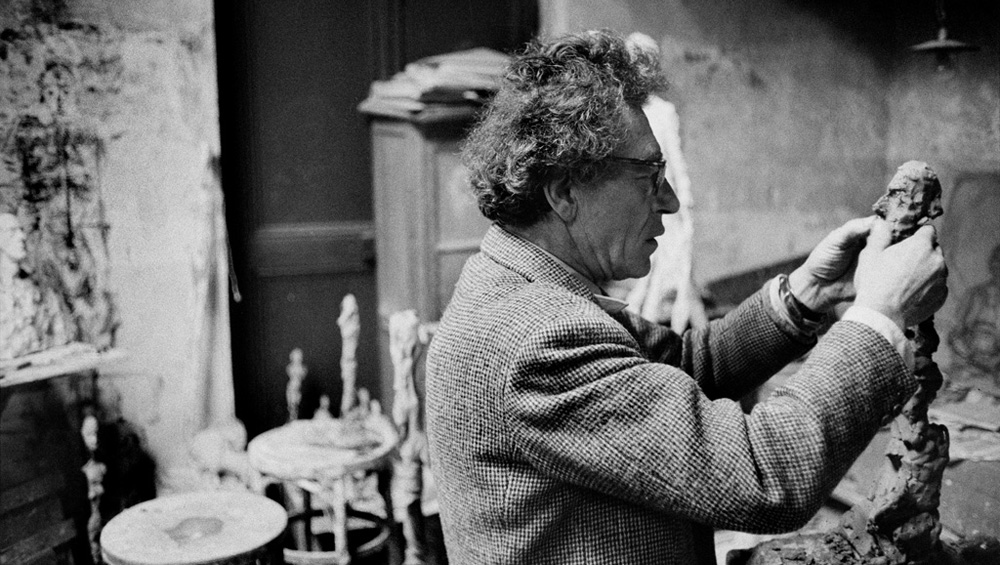 This exceptional exhibition at Vancouver Art Gallery brings together a bold variety of sculptures, paintings, drawings and lithographs by Alberto Giacometti (1901-66). A Line Through Time examines not only the progress – or line – of Giacometti’s artistic career, from his early works to those produced after the second world war, but also those of his contemporaries. Exhibited alongside Giacometti’s body of work are select pieces from Francis Bacon, Eduardo Paolozzi and Germaine Richier, among others.

The title of the show, A Line Through Time, also refers to the importance of line in Giacometti’s work. Drawing was essential to his practice; he was, like many sculptors, a draughtsman. “One must cling solely, exclusively to drawing,” he once said. “If one could master drawing, all the rest would be possible. Drawing is the basis of everything.” From a very young age, he drew incessantly, interrogating the world around him through pencil, ink, coloured crayon and lithographic chalk lines. From the magnificent collection of Robert and Lisa Sainsbury, A Line Through Time showcases many of Giacometti’s pre- and postwar drawings, providing an essential context to the development of his artistic career. 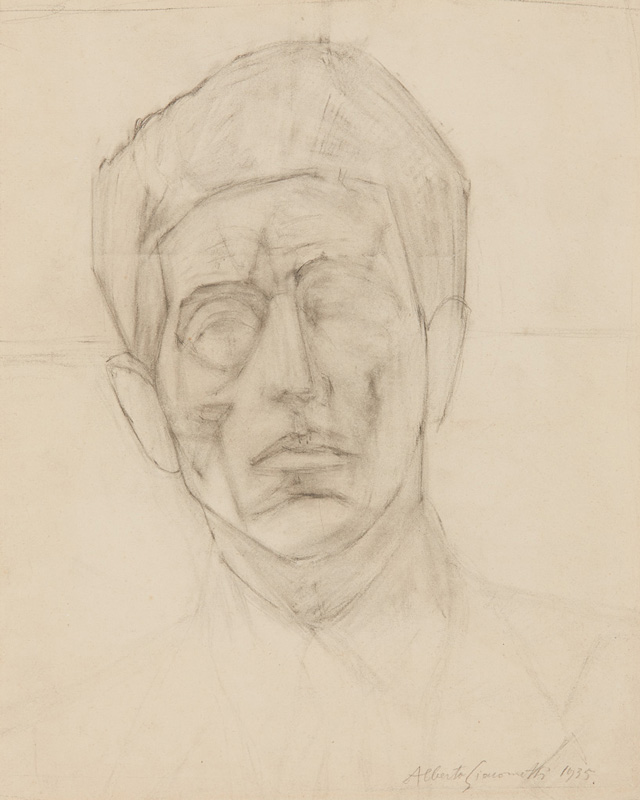 Giacometti was born and spent his childhood in the village of Borgonovo in Switzerland. It was there, under the guidance of his father who was an impressionist painter, that he began to draw, and where he made his first sculpture, in 1914, of the head of his brother Diego, who would become a lifelong model for Giacometti. He moved to Paris in 1922 to become an apprentice to the French sculptor Antoine Bourdelle, whose formal influence can be seen in The Skull (1923), one of Giacometti’s earliest drawings in the exhibition. The Skull shows the beginning of his obsession with structural form; take a look at the precise, vigorous lines around the eye-socket, for example, how acutely he focuses on dissecting the form’s construction. This can also be seen in his later drawings, such as Self-Portrait (1935), which, although drawn at a different stage in his career, still evidences the analytical eye with which he observed his subjects (in this case, himself). 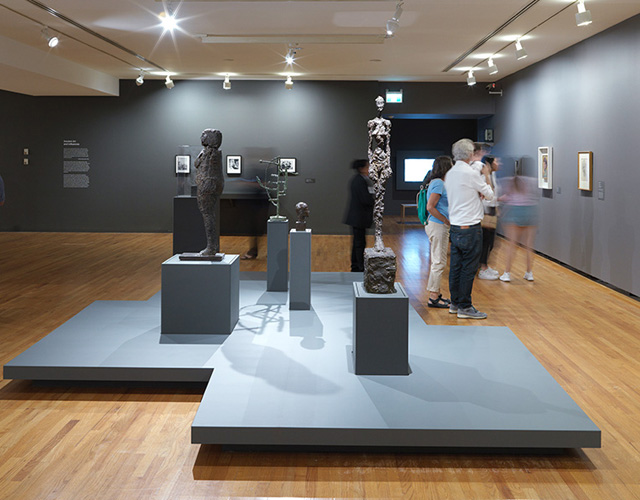 While living in Paris, Giacometti worked under the influence of surrealist and cubist artists, and he eventually joined the surrealist movement in 1910. He became known for his uncanny sculptures, such as Suspended Ball (1930-31) and Woman with Her Throat Cut (1932), a collection of bronze bones lying in a heap. Works by some of the surrealist artists Giacometti was surrounded by, a few of whom he knew personally, such as Jean Dubuffet, Richier and César, can be viewed in A Line Through Time.

After the second world war, Giacometti struggled to produce work, and it was through drawing that he began to re-engage with his practice. He became more focused on lonely and isolated figures, as can be seen in his drawings Woman Reclining (1940) and Standing Figure (1946). He also became obsessed with capturing a likeness, which incited him to return to his subjects over and over again – his brother Diego and wife Annette – who appear frequently in A Line Through Time. There is an anxious energy to his later drawings – see Still Life and The Tree (both 1949), with their accumulation of lines – and particularly in his three-dimensional figures. Giacometti broke down and restarted his sculptures repeatedly, sometimes abandoning the work completely before eventually revisiting it. He worked with his bare hands, or sometimes with moulding knives and spatulas, reducing, elongating, and distorting limbs and facial features, leaving behind an austere accumulation of gouges and marks. As his career progressed, his figures grew taller and thinner. 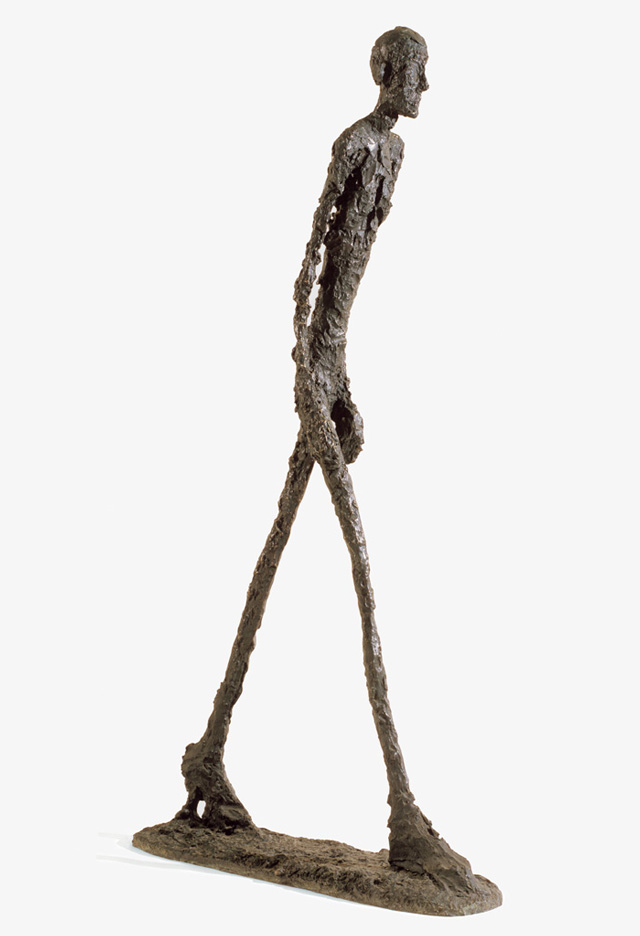 Giacometti returned to Paris in 1945, where he found the city and its habitants drastically changed. The brutality of the second world war had shattered French society, and this ravaged landscape provided a backdrop for the emergence of existentialism. Postwar artists, writers and philosophers began to question the nature of human existence in such a brutal, irrational world. The horrors of that period haunted Giacometti and his work. There is a sense of loneliness and isolation even in his prewar pieces, such as his drawing of the skull, which perhaps recalls a childhood trauma, but the alienation of his figures became even more pronounced in his postwar artworks. In drawings such as Portrait of the Artist’s Brother (1948) and Standing Figure (1946), his subjects are framed by an empty, blank page. The feeling is the same with his sculptures, most famously Man Walking (Version I) (1960) and Standing Woman (1958-59),in which figures stand or walk alone in an emptied area. 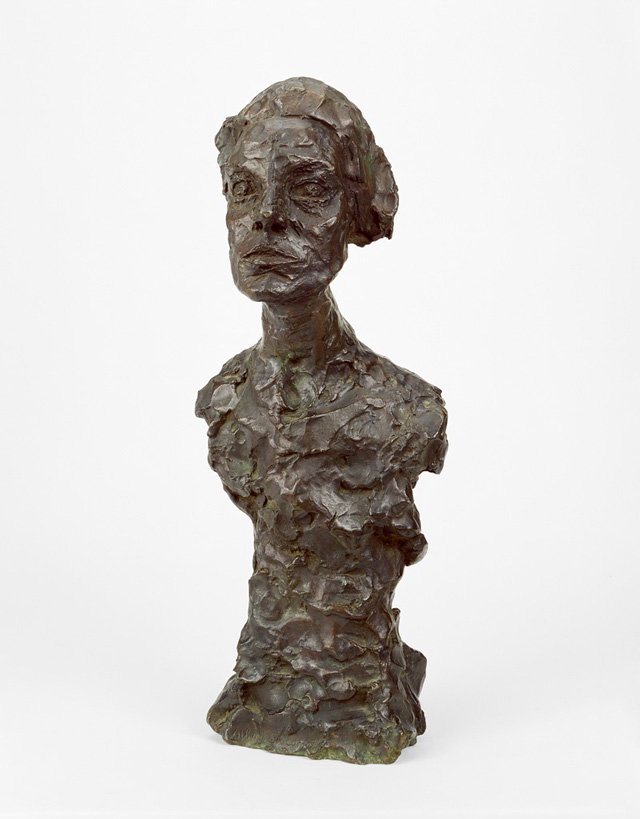 This melancholy is also captured in his paintings, such as Silvio Berthoud (1948), Diego Seated (1948) and Annette (1961). These portraits, like his sculptures, show Giacometti’s obsession with capturing a likeness, repainting and overpainting his figures, working and reworking their features. The wall label beside Diego Seated tells a fitting anecdote: the portrait was unsigned when Robert and Lisa Sainsbury purchased it in 1949, and when they took it to Giacometti for his signature, he insisted it wasn’t finished and wanted to take it back.

His mature body of work had a huge impact on art in Britain, and British artists such as Lucian Freud, William Turnbull and Eduardo Paolozzi travelled to Paris to meet him. Other artists took example from Giacometti’s existentialist approach: elsewhere in A Line Through Time is Francis Bacon’s Study of a Nude (1952-53), which takes its cage motif from Giacometti’s sculpture The Cage (1950). 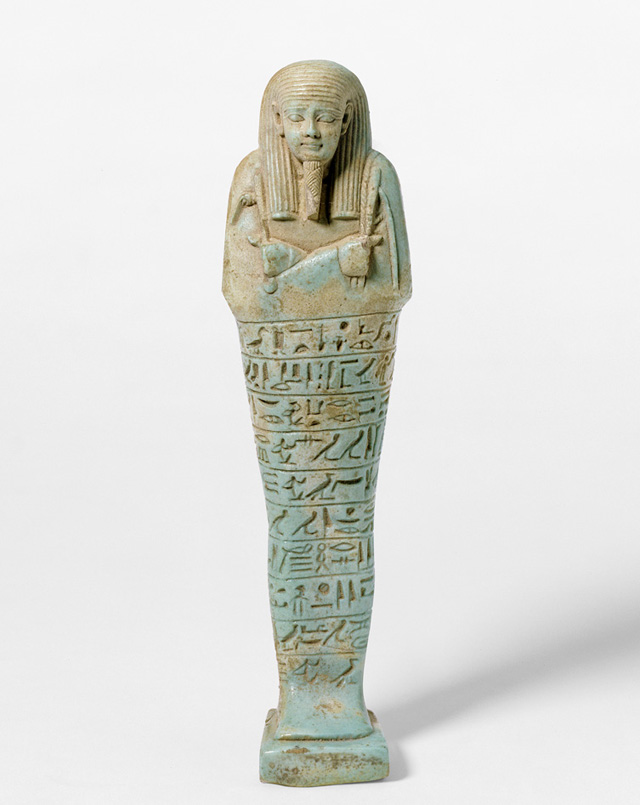 By this point, Giacometti had left the surrealist movement, instead becoming engrossed in ancient works. “The heads that come closest to resembling people I see on the street,” he later said, in 1962, “are those that are the least naturalistic – the sculptures of the Egyptians, the Chinese, the archaic Greeks and the Sumerians.” Included in A Line Through Time is the Egyptian sculpture Funeral Figurine (shawabti) from 570-526BC. In artworks such as this, Giacometti found a more truthful representation of reality, one that he wanted to capture in his own work. This aim became central to his artistic production. “The physicality of his work, of his mark-making process,” writes Paul Greenhalgh in his introduction to the exhibition catalogue A Line Through Time, “was his way of remaining in the real.” 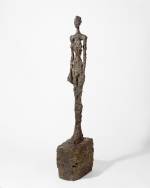 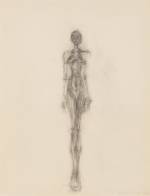 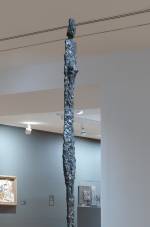