Mural, Pollock’s largest-ever painting, has been credited with breaking the ice for abstract expressionism. This exhibition explores the context in which it was produced and its effect on the contemporary art world

In 1948, Clement Greenberg wrote his essay The Crisis of the Easel Picture. The previous year, Jackson Pollock (1912-56), applying for a Guggenheim Foundation Fellowship, wrote (highly likely with the aid of Greenberg): “I intend to paint large movable pictures which will function between the easel and mural. I have set a precedent in this genre in a large painting for Miss Peggy Guggenheim. […] I believe the easel picture to be a dying form, and the tendency of modern feeling is towards the wall picture or mural.”1 The mural he mentions is a vast panorama spanning a canvas six metres long, the largest painting he ever made, and credited by Willem de Kooning as “[breaking] the ice” for abstract expressionism. Now on display at the Peggy Guggenheim Collection in Venice, the work forms the basis for a small but enlightening exhibition, exploring the context in which it was produced and showing something of the effect it had on the contemporary art world.

In a letter to his brother Charles, written on 29 July 1943, Pollock outlines his commission from Peggy Guggenheim to produce a large painting for the hallway of her New York townhouse: “With no strings as to what or how I paint it. I am going to paint it in oil on canvas. They are giving me a show Nov 16, and I want to have the painting finished for the show. I’ve had to tear out the partition between the front and middle room to get the damned thing up. I have it stretched now. It looks pretty big but exciting as all hell …”

This enormous canvas provided the painter with his big opportunity to realise his vision of making “energy and motion” visible on a larger-than-life scale. Pollock was greatly impressed by the three great Mexican muralists of the 20th century – Diego Rivera, David Alfaro Siqueiros and José Clemente Orozco. Picasso, in particular his monumental Guernica (1937) – another non-wall-based mural – was also an influence, and a page from a sketchbook, on show in the corridor next to the main room in the gallery, shows a range of Picassoid heads and angular people. Pollock – advised by Marcel Duchamp – painted his mural on fine Belgian linen so that Guggenheim would be able to take it back to Europe with her after the war.

Across the canvas, shapes can be made out: figures, heads, legs and feet – all marching westwards. Such directionality is unusual in composition, which typically works from left to right, the direction of western reading and writing. But Pollock, born in the west, had a fascination with its landscape: “I have a definite feeling for the west,” he said. “The vast horizontality of the land …” This idea of moving westward was something he had already explored in his earlier figurative painting, Going West (c1934-35).

Mural (1943) expounds a tension between emotional outburst and Pollock’s command of style, form and handling – something he maintained, even in his apparently automatic and uncontrolled pouring works to come. There is an emotive mix of the public and the private and the larger brushstrokes seem to breathe, expel air and revitalise. Colours of life (yellow, red, green) intermingle with that of death (black) and there are many different forms of mark-making, including some flicking and speckling – the first forerunners of his (in)famous dripping and pouring. The viewer is carried in a whirlwind of motion across the canvas, picked up, propelled, dropped down, swallowed into the deep vortices, spun around, and picked up again. Across the top, heads appear, thrown back, mouths agape, screaming – echoing the horrors of Guernica. But this is not a horrific work. It is not unsettling, despite the storm of movement and outpouring of feeling. It is vigorous, compelling and hopeful.

In the current exhibition, Mural is shown alongside an earlier and a later Pollock work, The Moon Woman (1942) and Alchemy (1947) respectively. This tripartite trajectory tracks the developments in the artist’s style, pivoting on Mural. In The Moon Woman, a single figure strides, upright, imposing, with a sense of energy; five years later, however, in Alchemy, Pollock pours this motion (and emotion) directly on to the canvas, without the need for a figurative go-between. Opposite Mural hangs Elegy to the Spanish Republic No 126 (1965-75) by Robert Motherwell (1915-91), painted specifically as a tribute to face Pollock’s work. A small canvas by Pollock’s wife, Lee Krasner (1908-84), Promenade (1947), also shows the influence of his style on those around him.

In the corridor next door, there is a display of wartime action photography – something Pollock would most certainly have seen in New York’s Museum of Modern Art in 1943. Works by Herbert Matter (1907-84), Aaron Siskind (1903-91) and the Albanian-born Life magazine photographer Gjon Mili (1904-84) translate the traces of human movement into abstract, linear vectors. In particular, Mili’s extended exposure shot of Alfred Hitchcock sauntering from right to left – westward – across the frame, during the filming of Shadow of a Doubt (1943), would most certainly have been an influence on Pollock.

Another influence, visible in the composition of Mural, was an article by Thomas Hart Benton published in 1926,2 which included an illustrational diagram of an oblong format divided by uprights, with arcs curving around them. This underlying template can almost be traced in Mural. Like Pollock, Benton also eulogised the west: “Where does the west begin?” he wrote. “Strung in a zigzag pattern up and down the ninety-eight-degree line, there is a marked change of country which is observable wherever you journey westward […] In the West proper, there are no limits. The world goes on indefinitely. The horizon is not seen as the end of a scene. It carries you on beyond itself into farther and farther spaces …”3

Pollock believed in a sense of “all-overness”, which, for him, had quasi-religious, cosmic properties: along the lines of William Blake’s claim to see a world in a grain of sand and eternity in an hour. Certainly, with its evocations of life and death, hope, movement, growth and eternity, Mural might be described as a Gesamtkunstwerk, an embodiment of the American dream and the attendant principle of “Go west”. Motherwell describes the painting of Mural as “the catalytic moment” in Pollock’s art. At the end of his book, published to coincide with this exhibition, the curator David Anfam compares the impact of Mural on postwar American art to that of Picasso’s Les Demoiselles d’Avignon(1907) on European modernism in the first half of the 20th century – this is seemingly not an exaggeration.

• Jackson Pollock’s Mural: Energy Made Visible by David Anfam was published by Thames & Hudson to coincide with the exhibition, rrp £24.95. 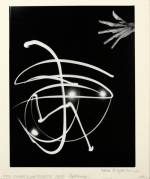 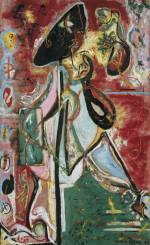 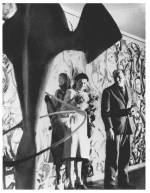