Jackson Pollock’s black paintings have been unjustifiably dismissed by many. Tate Liverpool’s exhibition focuses on this largely neglected period, including also drawings and sculptures done not long before the artist’s untimely death

In autumn 1950, on the evening that photographer Hans Namuth finished shooting his second short film of Jackson Pollock (1912-56) working in his Long Island studio, and after two years’ abstinence, the artist, best known for his drip paintings, picked up the bottle again. That same year, Pollock visited the exhibition Black or White Paintings by European and American Artists at the Kootz Gallery, New York, which included works by Willem de Kooning, Robert Motherwell and Joan Miró. He probably also saw the exhibition of black and white paintings by Franz Kline at the Charles Egan Gallery. What happened next might, therefore, not come as such a great surprise: in a period of great personal blackness, and in an artistic context where monochromatic studies were de rigueur, Pollock, too, turned to working solely in black. The following year, between May and September, he produced 28 such paintings, with 16 more in 1952 and a further – and final – 10 in 1953. Robert Goodnough may have favourably described Number 32 1950, the first black painting, as showing “open black rhythms … dance in disturbing degrees of intensity, ecstatically energising the powerful image in an almost hypnotic way”,1 but not everyone shared his good opinion.

Pollock had developed his poured drip painting technique five years earlier, following his marriage to fellow painter Lee Krasner and their move away from the bars and temptations of Manhattan to Long Island. A man of the wild west, hailing from Cody, Wyoming, Pollock felt at home here and enjoyed the luxury of space. He was clear, however, that technique was just a means of arriving at a statement. The first room in the exhibition contextualises the black works by showing some impressive loans of these better-known drip paintings, negotiated by Nicholas Serota from institutions across the US.

Number 3 1949: Tiger (1949) is discordant and organic, densely layered with a mixture of oil and enamel paint, with colour pouring over the edges of the frame (Pollock rarely stretched his canvases before painting). His work is often likened to the music of his jazz contemporary, Charlie Parker, who spoke of his saxophone becoming his voice. Certainly, with the Jungian influences apparent on Pollock, who, along with the other abstract expressionists, sought to express an inner landscape of the unconscious mind and dreams, it might be suggested that his lack of direct contact with the canvas meant there was no intermediary between it and the content of his mind – his canvas could be said to be at one with his mind.

Even these seemingly chaotic paintings were the result of careful consideration, however. Pollock would often stand and contemplate his progress, and he spoke of the need to “get acquainted” with the work and the importance of not “losing contact” with it. For me, there is an absolute serenity to his contained chaos. He also rejected the term “abstract expressionism”, saying “and [my work is] certainly not ‘non-objective’ and not ‘non-representational’ either. I’m very representational some of the time, and a little all of the time. But when you’re painting out of your unconscious, figures are bound to emerge.”2 The suggestion, then, that his black paintings mark a “return to figuration” was refuted by the artist himself. Tate’s own Summertime: Number 9A, 1948 (1948), from the earlier period, is certainly suggestive of figures moving across the canvas, too, dancing rhythmically, with a sense of motion and narrative.

The black paintings were originally known as the black and white paintings, but actually there is no white, just black paint on unprimed canvas. Many have dismissed them as a symptom of Pollock’s decline, but they are every bit as considered and detailed as the earlier works, imbued with Jungian elements, layers and tones. Untitled (Black and White Polyptych) c1950 shows a high level of precision as Pollock drew five rectangles on to the canvas and, with no use of masking tape, poured and dripped and contained his massive physical energy within each of the boxes. These were created for the purpose of being photographed for screenprints, something Pollock had turned to (somewhat unsuccessfully) to bring in some cash – he may have been a celebrity, but certainly not a very wealthy one.

A lot is to be gained from looking at the black paintings in the flesh. Although they appear rather sketch-like and unfinished in comparison with the earlier drip works, they are nevertheless intriguing and compelling. The alternations in thickness of line bring out darker and lighter shades of black; patches of paint on Number 5, 1952 (1952) are so thick and shiny they still appear wet; and many a vision emerges on longer contemplation, be it Pollock’s or the viewer’s own. There is an undeniable likeness to Picasso’s work, in particular the eyes towards the bottom right-hand corner of the screenprint Untitled 1951 after Number 27 (1951).

Alongside contemporary influence, Pollock’s transition to black is in part attributed to a sustained period of drawing and experimentation with the possibilities of the graphic line and ink stain, early in 1951, following the gift of some Japanese paper from the sculptor Tony Smith. Working on a stack of the thin sheets, Pollock would drip the ink on to the top sheet, allowing it to bleed through, creating ghosts on the lower pages, which he would then work on top of. The results, which fill a small side room in the exhibition, are delicate and exquisite, some akin to pages of calligraphy (for example, Untitled, c1951); Number 3 (1951) has one small red dot at the top, suggestive of a Japanese sun.

This same room also hosts a tiny wire, plaster and paint sculpture, Untitled (c1949), which lyrically renders his continuous drip pourings 3D. Although another area of his work that is vastly overlooked – and underrepresented, since only a dozen or so remain – Pollock had made sculpture from an early age, and wrote to his mother and brothers in 1933 that he even preferred it to painting. Next door, two plaster, wire, sand and gauze pieces, made in the weeks before his death, look hauntingly akin to the cow skulls collected by Georgia O’Keeffe, supposedly representing the spirit of America.

Shortly after a show of his first big run of black paintings closed at the Betty Parsons Gallery, New York, in December 1951, Pollock severed relations with this dealer and moved to work with Sidney Janis. Less than a year later, he began to reintroduce primary colours into his poured works. The Tate exhibition closes with Portrait and a Dream, 1953, a diptych-like work, said to mark the culmination of his black paintings. On the left-hand side, the dream (or is it the portrait?): a surreal black composition, with Miró-esque stickman hands (top left), an obliterated face (top right), and all manner of other possible images (is that a mouse or a dog in the centre?). On the right-hand side, the portrait (or, quite possibly, the dream): a grey, orange and yellow face, half covered by a mask, with what could be a jester’s ruff. Pollock was, once again, drinking heavily, and his productivity was on the decline. Of course, we read this work now with the benefit of hindsight, but the elements of transition – or conflict – cannot be ignored: representation v abstraction, black and white v colour, the conscious v the unconscious, order v chaos, positivity v negativity, the past v the future. Pollock needed to make decisions, to redirect his life and work. He was looking for a way to carry on. Tragically, he never really found it, and this work might, as I overheard one visitor suggest, be considered his epitaph.

• Thank you to Ed Bruce and the participants on the Jackson Pollock Study Day, programmed in association with Continuing Education Centre for Lifelong Learning, University of Liverpool, and hosted by Tate Liverpool on 11 July 2015, for their ideas and comments, many of which informed this review 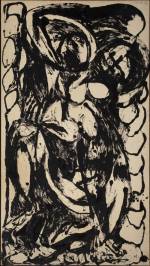 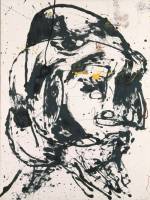