Ian Cheng – interview: ‘What’s the worst possible dad I could be? Maybe a dad who conflates his work with his kid and tries to make them the same thing’

Ian Cheng – interview: ‘What’s the worst possible dad I could be? Maybe a dad who conflates his work with his kid and tries to make them the same thing’ 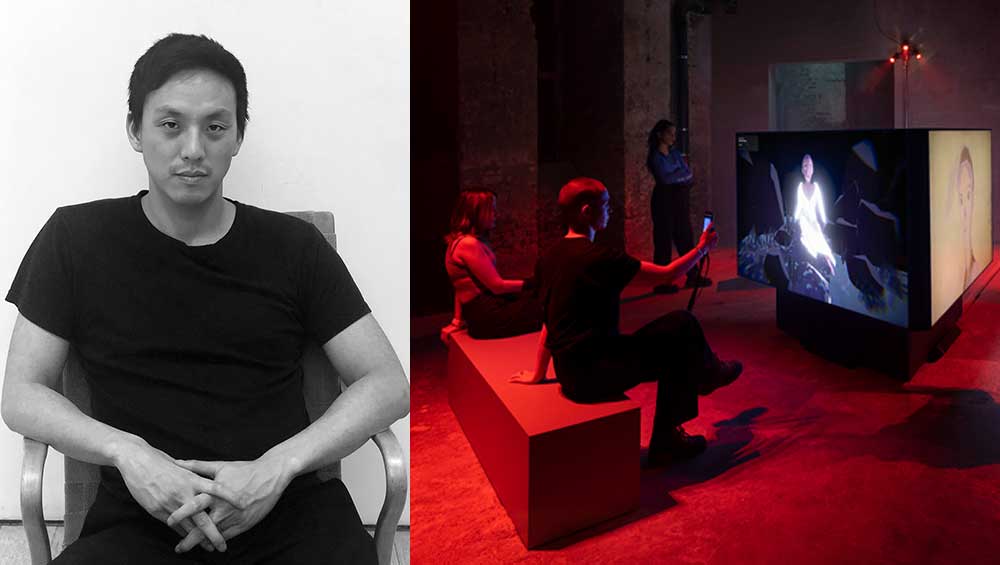 Imagine a world where an AI entity could live your life for you, making all those mundane and difficult decisions, while you escape into a world of fantasy. That is the concept behind Life After BOB, the most recent project from Ian Cheng (b1984, Los Angeles). The exhibition of the same name is housed in Berlin’s Halle am Berghain, a former heating plant, which is now the venue of Germany’s most infamous club nights. In more recent times, the building’s stark interior has also become an exhibition space and is an ideal setting for Cheng’s ambivalent vision of the future.

On arrival at the exhibition, presented by LAS (Light Art Space), visitors are ushered into a corridor, where they are asked to put their name and date of birth into a computer. A wristband is printed off with a personalised QR code and a prophecy for the wearer. The second half of this computer-generated wisdom will be offered at the end of the exhibition in the form of an NFT (non-fungible token), which is then minted by Tezos, a decentralised, open-source blockchain. If all this jargon is a bit offputting, don’t be deterred. You will soon be plunged into a trippy and immersive alternate world of storytelling and illusion. 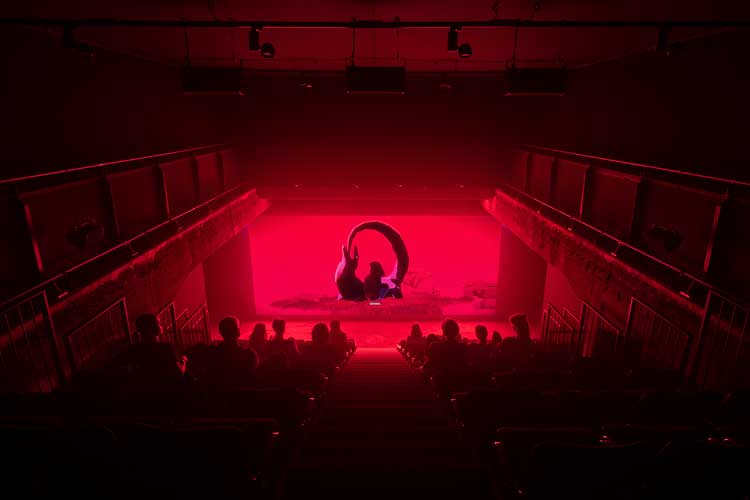 Upstairs, a cavernous industrial room of concrete pillars has been flooded by an eerie pool conjured by light. You can stoop below the surface and look up at the swirling patterns above. You may even catch yourself holding your breath. It is a fantastically mesmerising effect. From here, you are guided by orange beams of light into a purpose-built cinema, where a 50-minute anime film tells the story of Chalice, a little girl, for whom her father, Dr Wong, has high hopes. He has melded his daughter’s consciousness with BOB (Bag of Beliefs), a strange, multi-eyed creature whose artificially engineered intelligence directs Chalice’s life decisions from birth. The effect of this invasive sentience on Chalice’s life is not positive. Chalice is left wallowing in a fantasy world, questioning the value of her human self.

When she is eventually “uncoupled” from BOB, she realises that she has been little more than a vessel for an artificial and potentially – if unintentionally – harmful entity, an invention that threatens agency and free will. She has, perhaps, become a poisoned Chalice. What is remarkable about this film – the first of eight in a series – is that it was built inside the Unity game engine, the software responsible for hundreds of computer games. It is by far the longest film to have been made in this way. Visitors are then invited to explore scenes from the film as though they are exploring a video game.

Studio International travelled to Berlin to talk with Cheng about the origins of this project and what he believes the future holds for humanity’s relationship with technology.

Emily Spicer: How did you arrive at this project?

Ian Cheng: It came from the anxiety of becoming a dad. A few days after my daughter, Eden, was born, I started writing Life After BOB. Previously, my work consisted of large-scale simulations – eco systems with different AI agents. This time I thought to myself, I’m going to do something easy – I’m going to do a narrative thing. So easy right? Of course, it’s the hardest thing in the world to get that right! I was reading a Stephen King book on writing – King, the horror author. When he was writing The Shining, he was expecting his first kid. He had to ask himself: “What is the worst possible dad I could be?” For him, it was a dad with writer’s block, because a writer with writer’s block resents his child and his wife and, in the story, ends up murdering them.

IC: Pretty bad parenting, but it was almost a dreamlike way to generate a story, to generate something he cared about and something he was scared of. Of course, it’s a huge projection from his reality – he’s apparently a very good father – but it was a way to exorcise that demon. I took a very similar approach. What’s the worst possible dad I could be? Well, maybe a dad who conflates his work with his kid and tries to make them the same thing. I was so anxious about not having enough time for Eden. How am I going to be a dad and do my work? All these stupid fears sorted themselves out. But at the time, I felt like Dr Wong.

In the story, Dr Wong ends up falling in love more with the BOB side of Chalice, because BOB is perfect and does everything better, does everything so much more precociously. The Chalice side of Chalice, the human side, becomes jealous. It became this kind of Cane and Abel story in a way; Bob and Chalice are rival siblings occupying the same body.

ES: Do you ever think that AI could be a better parent than a human? Will it ever replace human parents adequately?

IC: Probably not. I mean it’s an interesting question, something I tried to raise in this film. BOB sort of raises Chalice, but is also is given the opportunity by Dr Wong to really embody Chalice and live her life for her. But children need the warmth of a body. There are studies about children who grew up without a mum, with no physical touch. They just get sick and die sooner. They can be fed, entertained, put to bed, learn language. But if they are not touched, especially by their mum, they actually get sick and die sooner.

ES: How far is this project your prediction of the future? Do you think we will become closely – perhaps even psychically – integrated with AI?

IC: I think I haven’t imagined it radically enough. In a way, it’s not that [technology] will be more integrated with us, it will just be weirder. I mean there are so many ways in which AI is emerging now. Have you seen those things where you can type in a phrase and it can generate an image for you? Like Dall-E?

IC: Scary, but fascinating, too. You can be a writer and have an instant concept artist trying to help you flesh out the visuals. As a tool for artists, it’s profound; it’s so cool. I don’t think anyone would have felt that optimistic if you had just told them what this thing could do. When you experience it, it’s a great tool. So, my point is that [AI] will unfold in much weirder ways than we could imagine.

ES: You said in the Q&A with the press, that distrust of AI is a generational thing. You used an excellent quote.

IC: Douglas Adams, who wrote The Hitchhiker’s Guide to the Galaxy – a very profound person, a humourist as well – said: the technology you’re born into feels like nature. The technology that emerges when you’re 15 to 35 years old is something you can make a career out of. The technology that emerges after the age of 35 feels like the end of the world, like the apocalypse. I think all of us relate to that in some way. But when I look at my own kids, from the perspective of a parent, it’s much easier to put myself in their shoes. I wonder, is the world they are growing up in – AI, crypto, VR, AR, immersive internet – is that going to be part of their future? Probably, whether I like it or not. So, I have to take the new on its own terms. 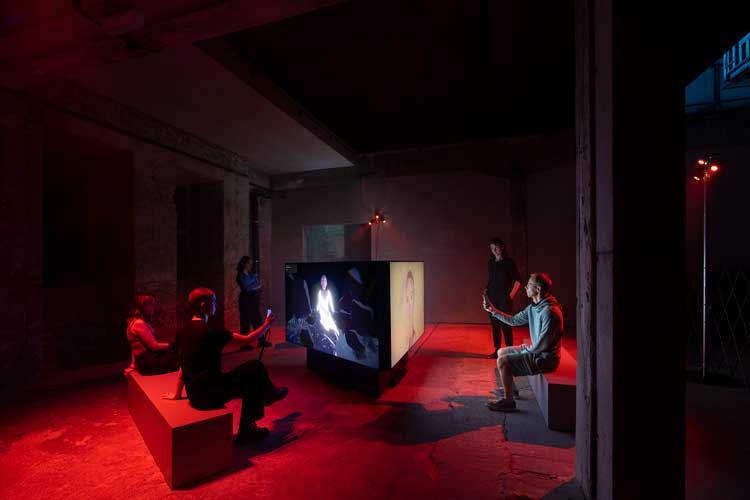 ES: Your past works have focused on storytelling, but with characters acting to fulfil a task against the open-ended chaos of ever-changing simulations. This project is more deterministic. The story is set in stone.

IC: That’s totally accurate. My previous works were simulations with very little narrative scaffolding, where different characters were reacting to each other and the environment was a way to get an appreciation for change. This one is built in a Unity video game engine, but it’s very deterministic as you say. It’s scripted. We had voice actors and we had animators animating the dramatic scenes.

The hope is that you can start with a narrative that people can understand and find meaning from, as we all do when we watch a drama. But then, if it’s situated on the plate of a simulation, you can quite fluidly do all these other non-deterministic things. For example, there’s this world-watching mode. You can scrub through the entire film as though you’re scrubbing through it on Netflix, but when you pause on any given scene or shot, you can click on anything using your phone as a kind of mouse. The camera zooms from a cinematic frame that you thought was maybe determined, and then zooms in on a glass, for example. And this glass is part of the mythology of Life After BOB. You can study it. There’s all this stuff in the Life After BOB Wiki that gets brought up. That’s just one example of something you can extend the film into, in order to get at the idea that there is a larger world that supports it.

ES: I think you were saying, too, that some of the details change in the background, some of the scenic elements.

IC: Yeah, there are like these little Easter eggs I have put in. There are obviously moments where I have updated the film across exhibitions. This is my favourite version. It’s quite different from the first version I showed. And if you edit the Wiki, as you can on Wikipedia, if you change some of the metadata, it will update aspects of that particular object in the film. And maybe you or I watching the film for the first time are subject to someone else’s update, but we don’t know that – we just think that it’s authored by the director, but it’s actually co-authored with the audience. It’s about art adapting to the viewer, or to its audience, while not giving up its identity. There’s a mutual influence. I think now we have the technological means to make media do that. It’s not just a passive viewing experience. It’s like having a conversation with someone. You are yourself, but you also adapt yourself to the person you’re talking to. And that’s a very beautiful thing.

• Life After BOB, presented by LAS, is at Halle am Berghain, Berlin, until 6 November 2022.