Hokusai: Beyond the Great Wave

Hokusai: Beyond the Great Wave

This exhibition brings to life the story of the Japanese artist Hokusai’s later, and arguably greatest, years 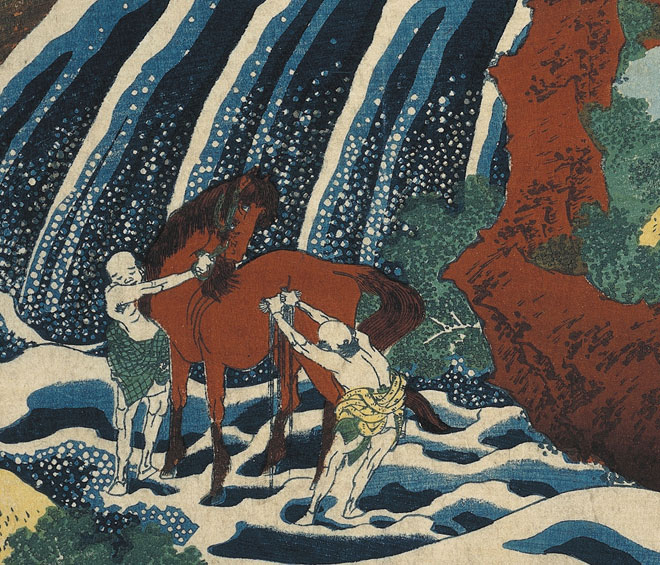 The waterfall where Yoshitsune washed his horse in Yoshino, Yamato province from Tour of Waterfalls in Various Provinces. Colour woodblock, 1833 (detail). © The Trustees of the British Museum.

The Great Wave (1831), you know the one. A towering claw of water dwarves Mount Fuji in the distance and threatens to swallow three vulnerable boats that are almost entirely concealed in its trough. It is so iconic an image that it has permeated almost every facet of popular culture from fashion and animation to phone and computer covers. It even features as an emoji. The Great Wave is part of the series Thirty-Six Views of Mount Fuji, by Katsushika Hokusai (1760-1849), which he began at the age of 70. Before this, he claimed: “Nothing I drew was worthy of notice.” Mount Fuji was almost an obsession in his later years, a sacred touchstone from which he drew strength; a talisman that would bring him long life. And, he believed, if he reached 100, he would achieve “a divine state” in his art.

The Great Wave was printed as many as 8,000 times and anyone could purchase a copy for the price of a large helping of noodles, such is the democratic nature of printing. But the affordability of these prints belies the hours that went into making them. When you look at a print belonging to the ukiyo-e (the floating world school of art), you are not only seeing the work of one man, or woman, but a whole production line of specialised, highly skilled hands. An artist drew the design, then the image was glued to a woodblock and the areas between the lines cut away. More woodblocks were needed (sometimes well over a dozen) to add layers of colour. Then a printer inked the blocks and placed the paper face down on each block in turn, rubbing the back to transfer the image. This sounds like the easiest part of the process, but when using watercolours and rice paste to produce vivid hues, only an expert will get it right for an entire run of prints. And the results are stunning. Japanese woodblock printing, when executed by the masters, is capable of a subtlety unmatched by European techniques.

But European art played a part in the ukiyo-e world. Hokusai adopted compositional elements and learned perspective from Europe, just as European artists – such as Van Gogh and Whistler – were influenced by his work and that of his contemporaries. Although overseas trade was strictly controlled in Japan in Hokusai’s lifetime, a new pigment arrived that transformed his approach to landscapes, and several of his Views of Mount Fuji used only this new Prussian blue. This series captured not just the changing colours of the mountain, but also the lives of those who lived in its shadow. Tourists admire its snowy peak from a temple; a cooper planes the wood of an enormous barrel that frames the distant mountain and Samurai race along the fields nearby. This series is arguably Hokusai’s crowning achievement and a commission that saved him from almost certain ruin; it had been a difficult few years. By 1830, his second wife had died, an errant grandson had run up huge gambling debts and he had suffered a stroke, which meant that he had to teach himself how to draw again. He would also survive famine, a smallpox epidemic, and a fire that destroyed most of his designs.

But this exhibition looks beyond Hokusai’s work as a master of printing and shows us his designs for decorative carvings and netsuke (toggles) and even his drawings for combs in the shape of Mount Fuji. And his books of manga (sketches) number 15 volumes. But when he reached his 80s, he focused increasingly on painting, with the help of his daughter Katsushika Ōi, who was a talented artist in her own right. Her painting, Hua Tuo Operating on the Arm of Guan Yu (1840s) is a particularly fine example of her skill. A famous physician works to remove a section of poisoned bone from the arm of a Chinese general, who coolly continues his board game while the outstretched limb is sliced open. Ōi has spared no detail. Streams of blood pour into a dish, which is held by a wincing servant, and the blue veins on the wrist of the affected arm stand up with the physical trauma of it all. Despite this, the general remains the picture of stoicism.

With his daughter by his side, Hokusai’s potential seemed boundless. He was, as he put it, “an old man crazy to paint”. With the Japanese Buddhist belief that everything has a spirit and is interconnected, he examined form and movement, cause and effect and was extraordinarily sensitive to the natural world. His painted birds brim with life and personality and his flowers are so convincingly bowed by the wind that you can almost hear their leaves rustle. And his flair for storytelling is, for want of a better term, cinematic. He painted Monk Nichiren and the Seven-Headed Dragon Deity (1847) in the moments after it has transformed from its guise as a beautiful woman. The monk, seated on a rock, calmly reads the holy sutra scroll to his congregation, while the dragon rises above the cowering crowd in a cloud of black smoke. Hokusai has splattered black ink on to the scroll, so that it looks as though soot is raining down from the sky and the red robes of the monk are convincingly agitated by the action, whipped to the side by the draught of the beast.

This exhibition tells a good story, and like any good story, its characters are vivid. There is a real sense of Hokusai’s energy and passion, and his daughter’s strong will and sense of humour come through, too. On some of her works she signs her name “tipsy” because she liked a drink, and portraits of her by contemporaries show a woman very much attached to her pipe. And Hokusai’s will to carry on so that he might master his craft that little bit better with every passing year is a touching thread throughout. Even at the age of 89, he felt that there was more he could do to improve. His last words were reported to be: “If heaven will extend my life by 10 more years …”, then, after a pause: “If heaven will afford me five more years of life, then I’ll manage to become a true artist.” 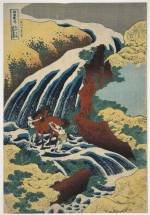 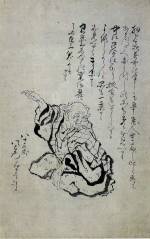