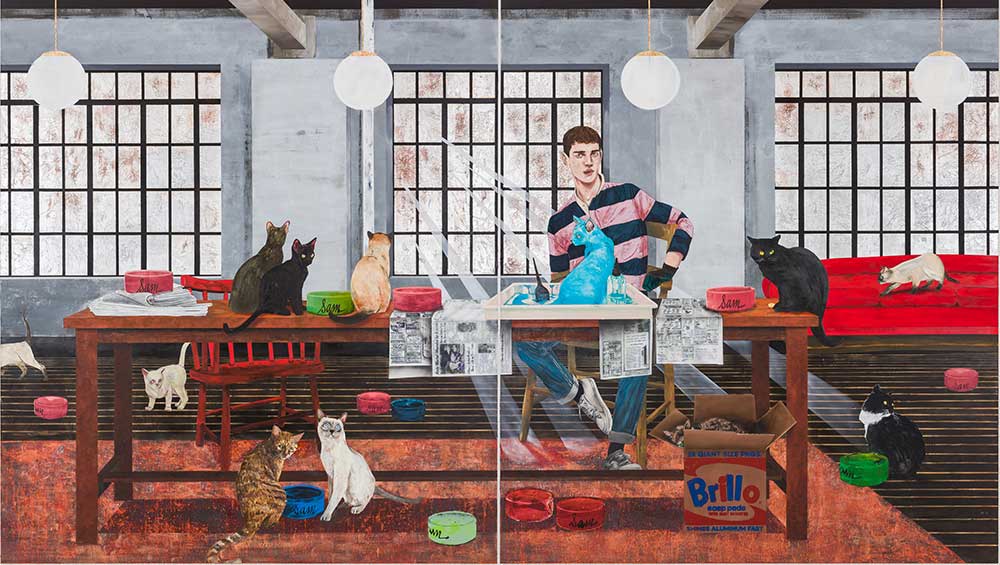 A waifish, willowy man in a pink-and-blue rugby jersey, rolled-up jeans and white sneakers gazes at the artist, simultaneously proud and tired. In front of him sits a cat that has been painted, from head to tail, in a freshwater blue. Several other, more fortunate felines lounge in the room, a factory conversion whose windows are covered in silver leaf. Each of the cats has a bowl marked Sam in a looping calligraphic hand. What does this man think he is doing? The most obvious clue is a box of Brillo pads lying under his table. This is a man obsessed with Andy Warhol – dangerously obsessed, for cats at least. He seems to have embarked on a literal version of Warhol’s pre-fame picture book 25 Cats Name Sam and One Blue Pussy (1954), created with his mother, Julia Warhola.

This work, Conceptual Artist #7 (A Warhol enthusiast, his 26th studio mate completes the story) (2022), is the centrepiece of The Conceptualists, the new exhibition by the Miami-based artist Hernan Bas (b1978) at Victoria Miro Gallery. It features 13 new large-format paintings, and some associated drawings. Each depicts a fictitious conceptual artist engaged in the process of creating their eccentric, monomaniacal pursuit. Bas’s subject matter is a gently mocking delight. 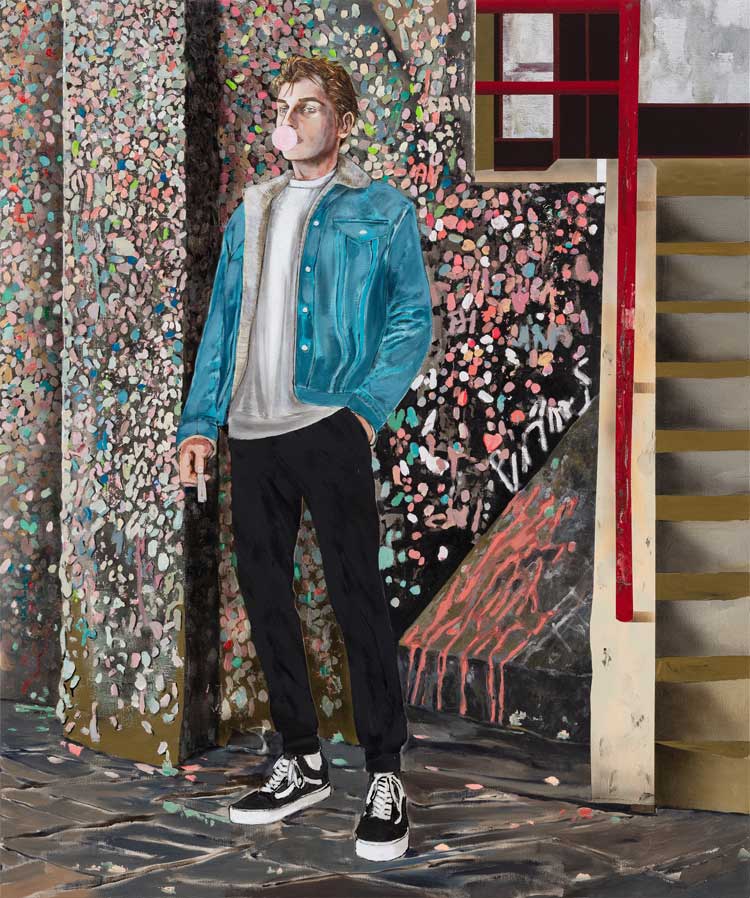 We meet the painter who mixes his paint exclusively with water from Niagara Falls, the ice sculptor who sculpts only objects that carry ice and an artist who chews gum then sticks it to the walls of an alley. One, who only eats his favourite dishes after the main ingredient has recycled itself, defines himself as “a sustainability-based culinary artist”. Others are more alarming, such as the artist who has tied himself to fireworks to test out whether he will fly or drop to the ground, or the one who sends a single dead fly in an envelope to everyone in his postal district. “What before might have been seen as a rogues’ gallery of ‘weirdos’,” writes Bas in his artist’s statement, “is now, under the guise and cover of ‘art’, a series of portraits of intellectuals.” 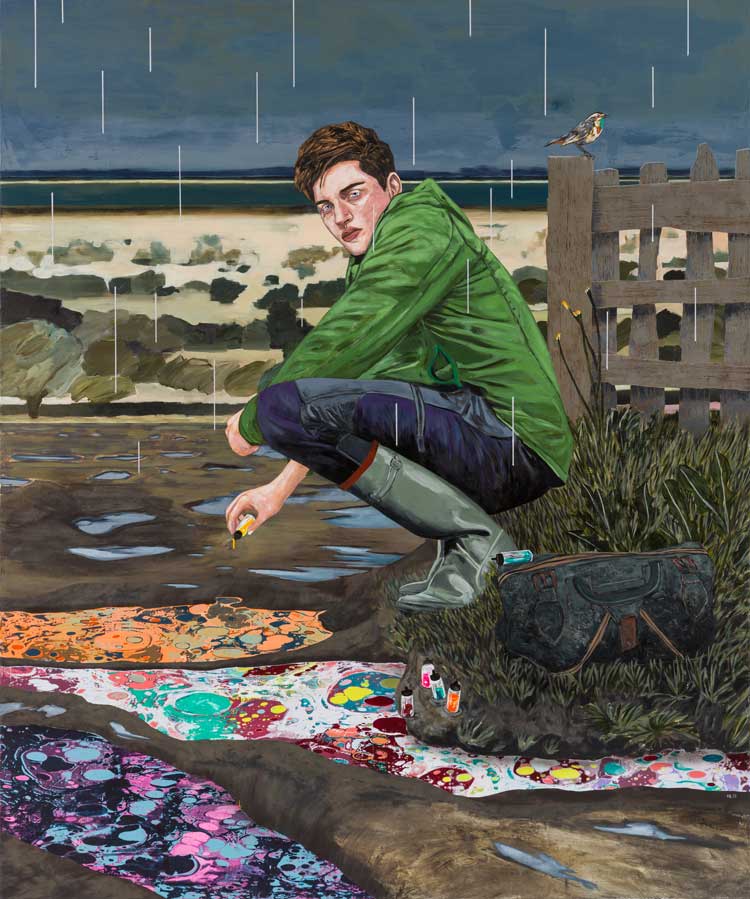 Even when the obsessions of Bas’s subjects are less readable without context – the artist, for instance, who repaints his studio walls a random “Colour of the Year” each January – the stories become clear with Bas’s wry subtitles. Conceptual Artist #8, for instance, is described as “Land-based and intentionally ephemeral, his work aided by a trusted bag of food colouring elevates rural puddles”. The exhibition is accompanied by a collaborative book with the critic and novelist Linda Yablonsky, who takes each painting and creates a short biographical vignette for it. Yablonsky’s character sketches, peppered with humour and spot-on references to art history, are imaginative expansions of each work.

Bas’s own story is one of precocious talent. He was born in Miami to Cuban parents. He began painting as a young child and went to a school with an art focus. Afterwards, he attended New York’s Cooper Union for one term, but was expelled for failing to turn up, and returned to Miami with no additional formal training. He had a breakthrough in 2004, when he was featured in the Whitney Biennial. The next year marked his first solo exhibition at Victoria Miro. He has continued painting since, to considerable acclaim. 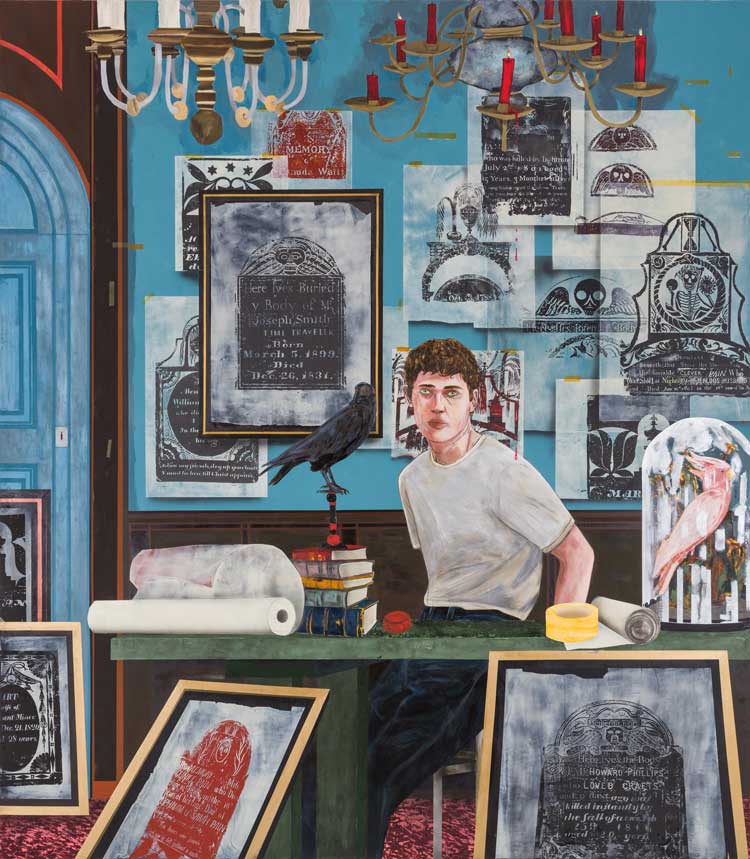 His works largely focus on figures in interiors and landscapes. They are not quite portraits, as the setting and action depicted often seems equally important to the person at their centre. These settings are immensely varied. They usually contain an enormous amount of detail. Conceptual Artist #1 is surrounded by bottles of fall water and watercolour trays, while #6 sits before his artworks, which have been created by rubbing multiple gravestones and combining the texts to create new lives. His previous works sometimes tended towards a sort of imagined fin de siècle, all Mallarmé and melancholia. Others are riddled with modern design icons, such as Memphis furniture. Artists’ studios are a natural extension.

The variety of Bas’s settings can be contrasted with his figures. These are almost invariably male, sylph-like and in their 20s, a time of life full of passionate potential and tenuous and uncertain, in-between days. Youth and thinness are almost a requirement. His most acclaimed early works used the SlimFast dietary supplement as paint; some had “Team Waif” written on them. In this, they have a hint of early 2000s men’s fashion, when muscular bodies were replaced by emaciated, often more androgynous figures on the runway. Although Bas’s work is far less explicitly sexualised than that of many of his queer contemporaries, his men do often have an erotic charge akin to that in fashion photoshoots. In this sense, his works can seem almost too easy in their appeal. 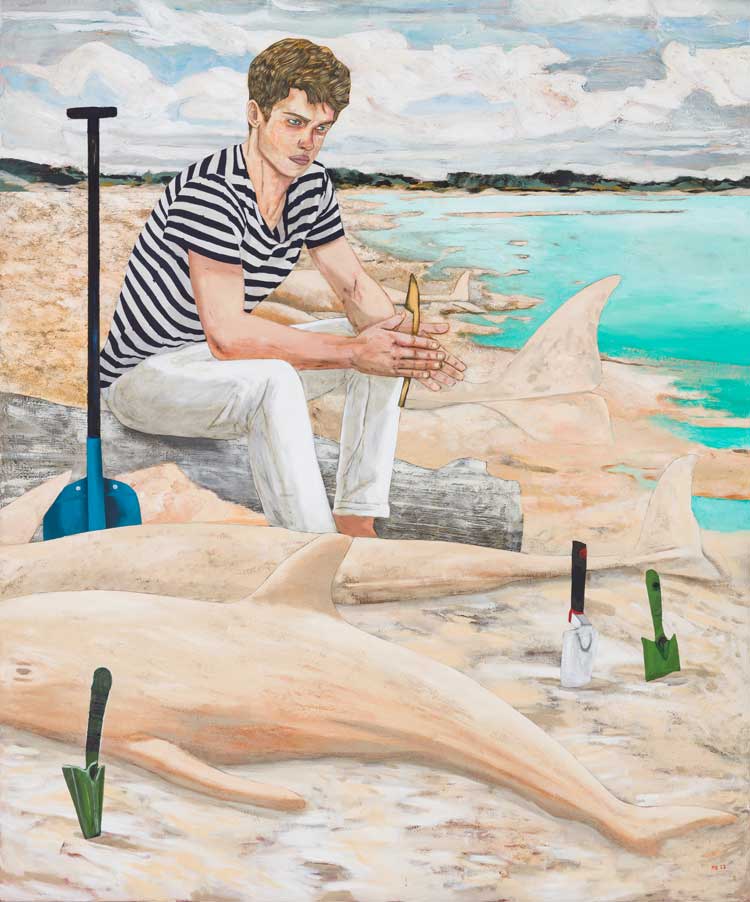 But there is more to his work that its beauty. Bas’s men are not mere mannequins. Bas is particularly good at facial expressions. These help make his obsessives at once sympathetic and comical. Conceptual Artist #10 (A sand sculptor and environmentalist, he exclusively carves scenes of mass “beachings”) is both laughable, sitting with an earnest determination as he contemplates the Sisyphean task of carving sculptures that will be swept away by the tide, and sympathetic in his idealism. 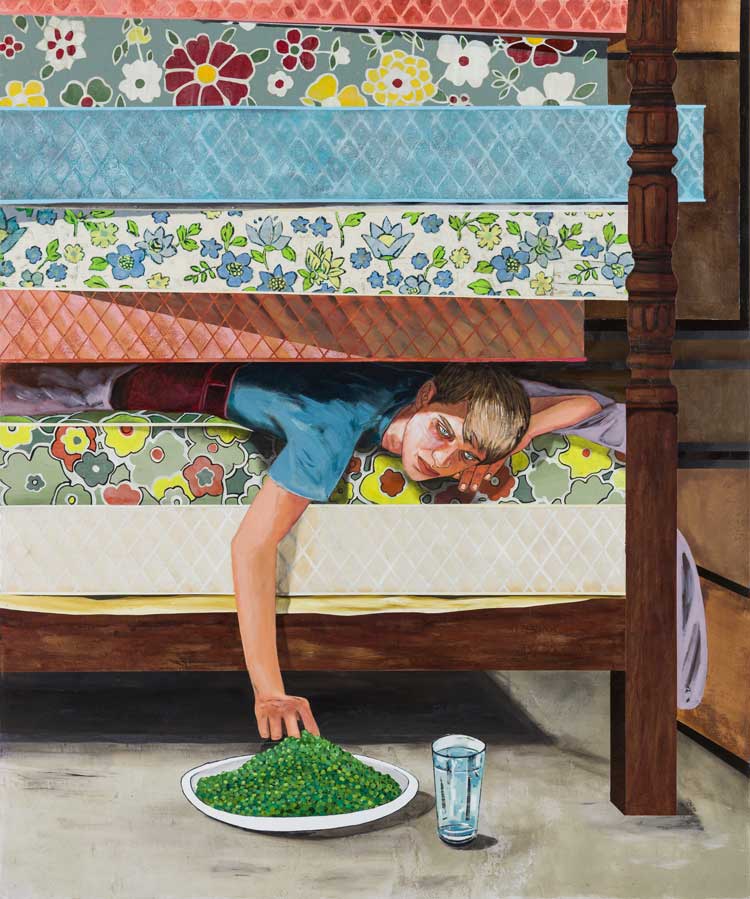 Bas also has a fine eye for textiles and patterns. Conceptual Artist #11, an adventurer into the idea of discomfort, lies sandwiched between seven mattresses, several of which display elaborate floral motifs. Perhaps connected to this is Bas’s ability to capture paint and other art materials. Conceptual Artist #4, the serial studio repainter, sits on a cloth stained with the sort of splashes and splatters familiar to anyone who has painted a wall. Conceptual Artist #5, who paints dying houseplants with gilt, stands in front of a cheese plant whose leaves remain green where the gilt has peeled away. And #8, the one who dribbles food colouring into puddles, crouches over three pools of kaleidoscopic shades; one can almost see the marbled patterns ooze. It is in these little details that Bas reveals himself an interesting painter indeed. 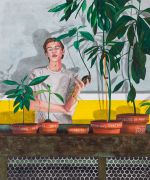 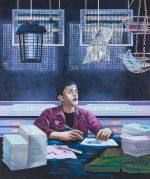