In her first institutional solo show, the German artist plays on the fast fickleness of commodification, trend and fashion

Darboven hated Richter’s paintings. So, at least, claims the title of a work by Heike-Karin Föll, which introduces her exhibition Speed, at Berlin’s KW Institute for Contemporary Art. Föll’s work, also a painting, about 1 metre x 1 metre, is from 2016, and shows a thick black line. It begins at the left edge of the picture about three-quarters of the way up, and loses force as it approaches the middle.

Whether Hanne Darboven hated Gerhard Richter’s paintings, I don’t know, but Föll asks the viewer to speculate. If so, it might have had something to do with how Richter portrayed history; solemnly, piercingly. Considering, for instance, his German landscapes, the Baader-Meinhof suite and the 48 portraits completed for the German Pavilion at the 1972 Venice Biennale, he did not necessarily lay claim to truth, but something about the concision of these works, their dedication, insinuates an aspiration, at least, towards credibility. Darboven, too, was dedicated, but  manically so. Take Bismarckzeit and Ein Jahrhundert ABC, in which she made absurdly comprehensive attempts at capturing the reign of Germany’s first chancellor in the former, and a whole century in the latter, by means of countless drawings, hundreds of frames. For Darboven, history is flickering and insane, grand and impossible. 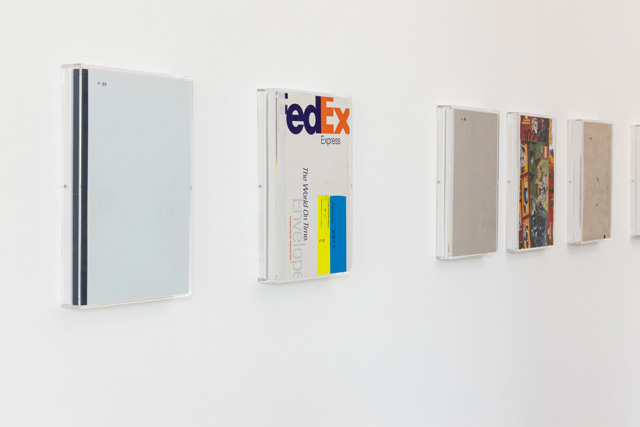 Föll’s painting tells us very little about Richter or Darboven, other than what her single line suggests of her own investment in opacity. As such, on the matter of history, I would say she is more with the latter than the former. Still, where Darboven relies on quantity,  Föll presents rather a choreography of concealment; an allure sourced from scarcity, editing and exclusion. Accompanying that work almost like a diptych, Made of Violence and Light (2014), in spite of its epic title, is similarly vague: as if tracing the flight of a bumblebee, a doodle loops across the canvas. In these two works, the surface of the painting is an interface; gestures over a touch screen, but with the content of the screen excised; alive and interactive, but ultimately flat. 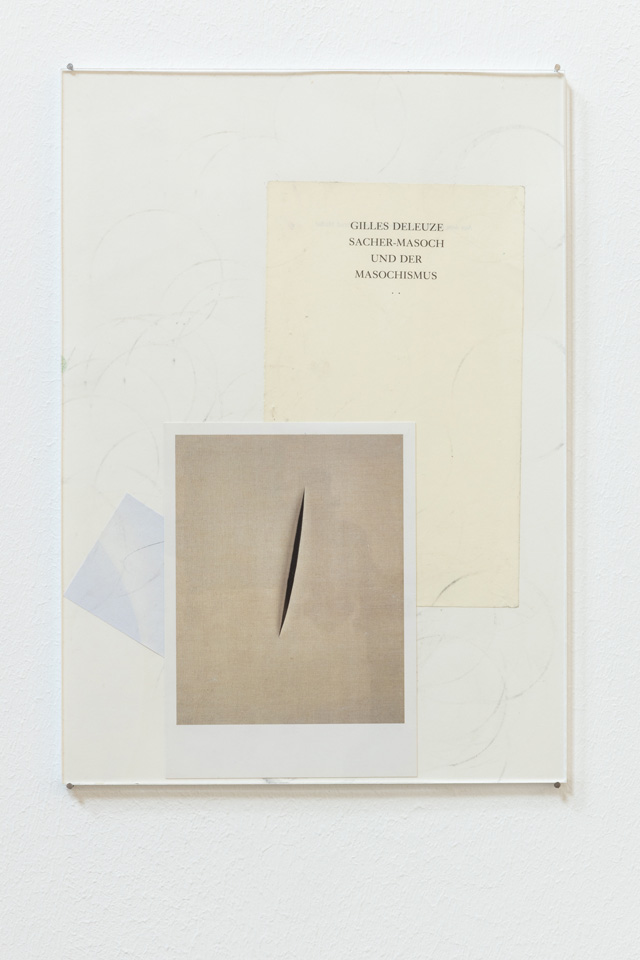 Directly adjacent, and part of the artist’s series of It Paintings, Nu Moves (2014) thinks of itself more as an object – “it”, of course, naming both thingness and trendiness. Nu Moves is closer to something we might call a composition, clusters of black lines of differing thickness appearing both dynamic and pleasing to the eye. From the same series, L’idiot de la Famille (2014) is even more– dare I say – decorative, and to the point that it summons the age-old pseudo-causal relation between beauty and stupidity. Here, again, there are the bouquets of black lines, but also a delicate pink splotch, a watered-down petroleum blue gesture, and a writing-on-A4 collage element. Are paintings allowed to be this pretty? 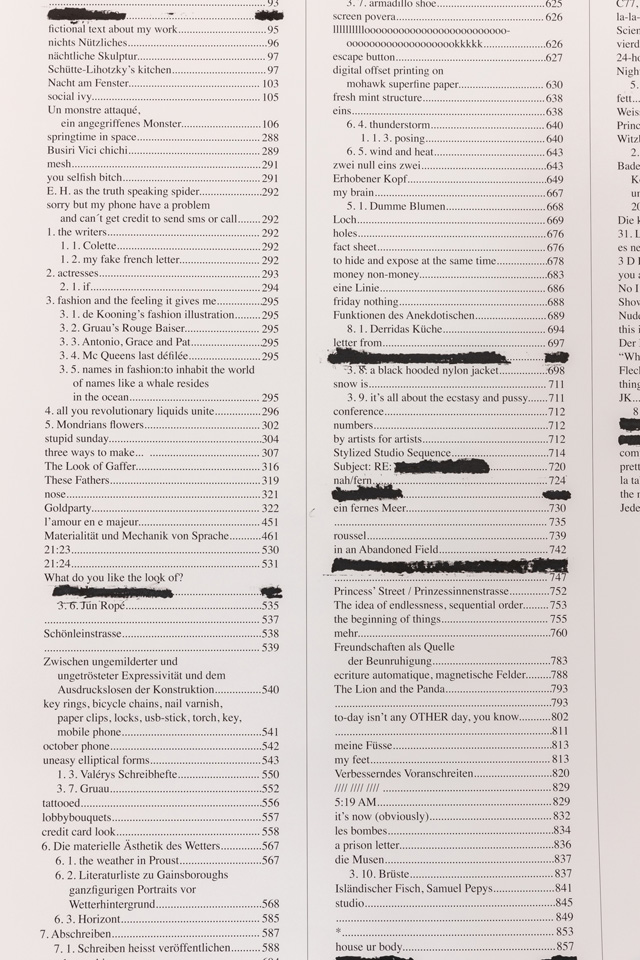 In this case, yes, or at least the question is held in suspension. Because the It Paintings thematise their own readiness for consumption, but also the disloyalty of such a dynamic; the liability of its premises to shift, leaving either the objects or the viewers behind. I missed Magnetic (2019), another work from the series, because it was hidden behind a wall. An aesthetic thrill stolen from under my nose. Föll plays on the fast fickleness of commodification, trend and fashion. This, perhaps, is the “speed”of the exhibition’s title. How quickly objects (artworks as well) flare up, and come back down, obsolete, and how consumers, too, are spun in this process. Taking cover can be necessary to preservation. 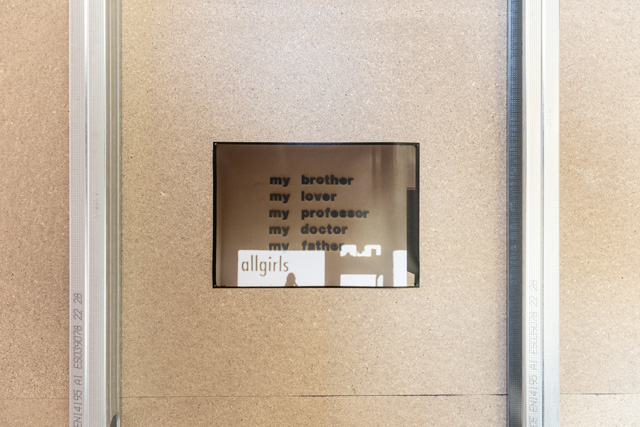 In the work My Brain (2010-19), Föll grants us calculated insight into her thinking, through a constellation of 45 drawings, many incorporating fragments of photographs or documents. One of them, two fat lines over the iconic silhouette of Alexander McQueen’s armadillo shoes, refers to the designer’s 2010 spring show Plato’s Atlantis. The collection was significant for being McQueen’s last before his death, and the show for being the first to be live-streamed, breaking open the exclusive Parisian time-space to give anyone simultaneous access. But the servers crashed when millions stormed the platform after Lady Gaga tweeted that her new song would debut in the show. What was celebrated as a democratisation of access to a cultural event was also a frantic spectacle of consumerism, a meltdown. 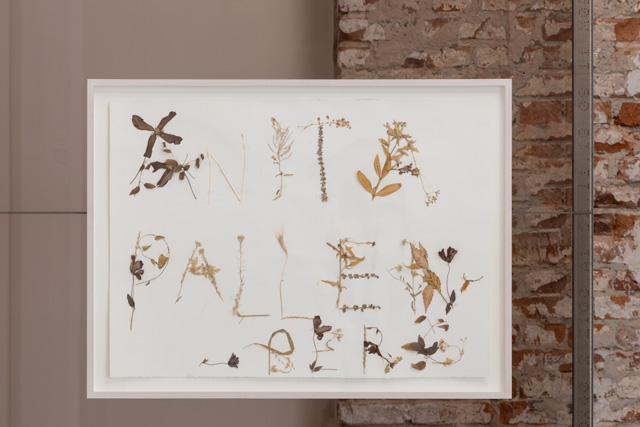 Speed is arguably fashion’s biggest problem, and one that has only got worse since 2010. In the same way that access implies inclusion, it also enables consumption. And in the same way that speed means burning up, it can also be a form hiding, ninja-style, in a new place. Föll accelerates only to go in circles, or sneak behind a wall. Her work seduces, as capitalism asks it to, but without ever revealing what is on offer. To come back to the notion of history, hers is rather an anti-story; a narrative chopped up, wilful, evasive and perfectly incredible.