Harriet Middleton-Baker: ‘I enjoy the potential for opera to be seriously extreme’

Harriet Middleton-Baker: ‘I enjoy the potential for opera to be seriously extreme’

The artist talks about unpicking the story of William Hogarth’s A Harlot’s Progress and using her latest opera to explore architectural form, power distribution and the ambivalence of feminism in a corporate climate 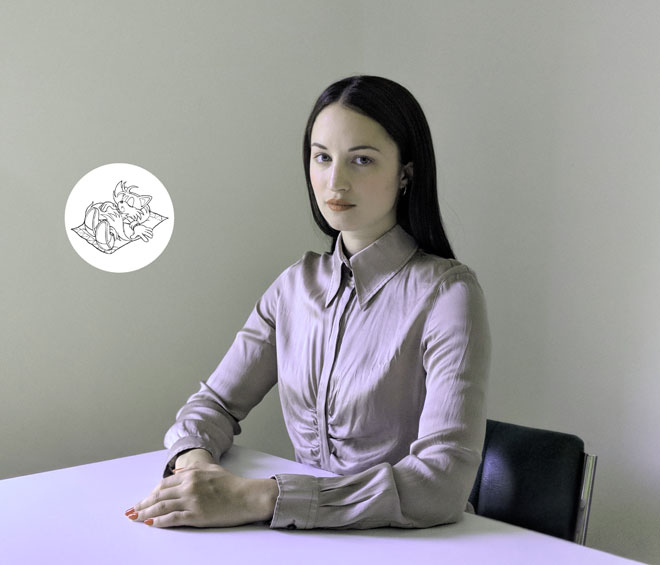 Harriet Middleton-Baker (b1989) devises feminist opera: The Harlot’s Progress: Proposal for a New Opera in the Sci-Fi Genre in Six Acts (2017) shown at Guest Projects in London, and, more recently, War Room, an Opera! (2018) at Cell Project Space, London. I meet Middleton-Baker at her studio in the Koppel Project – a former office block now run as artist studios in the centre of the city – where we talk about William Hogarth, soap operas and women in the boardroom.

Izabella Scott: What drew you to opera? There’s a certain grandeur …

Harriet Middleton-Baker: A year ago, I was walking through a park in London, listening to some highbrow radio. Peter Ackroyd had written a libretto that retold Hogarth’s tale A Harlot’s Progress (1731). I’ve always been intrigued by Hogarth’s ridiculous and misogynist stories, which he tells across his paintings – like A Rake’s Progress, another dark satire from the 1730s. I wanted to know what this guy Ackroyd was doing rewriting Hogarth’s gendered tale in 2013. I wanted to unpick the story. 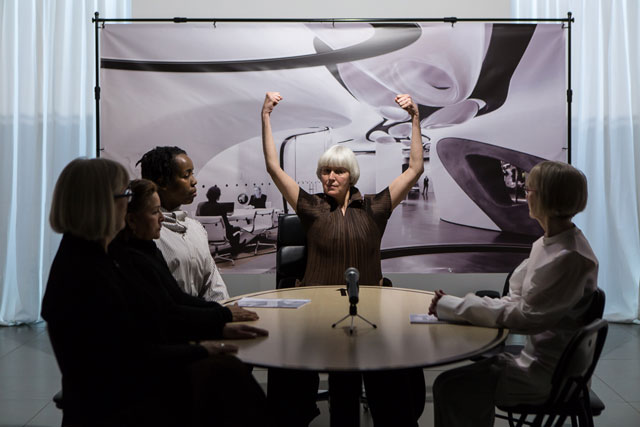 HMB: I mean, no. He took the story at face value – and it had so much potential for another kind of telling. There’s so much to critique, of course. The original story was a cautionary tale with a social function – a kind of allegorical warning for women, told over six paintings. It’s quite a winding story. A young woman called Moll Hackabout leaves the countryside for the big city, where she is seduced by an old woman who runs a brothel. So, Moll is corrupted, and there are many subplots – one antisemitic section, for example, where Moll meets an old Jewish man, who becomes her main client. She has various affairs and at one point is sent to jail, later going mad and dying as a result of syphilis. It’s brutal.

IS: The opera you wrote, The Harlot’s Progress: Proposal for a New Opera, transforms the story into a feminist science fiction. How does it work? Are there any RoboCops?

HMB: It’s a London B-movie retelling of the story, a feminist opera where the women leave the brothel and slaughter everyone. I used the tropes of traditional opera – the violence, love, sex – but I also like misusing the word opera. It forces a certain grandeur, as if the word has the residue of status from a past century. 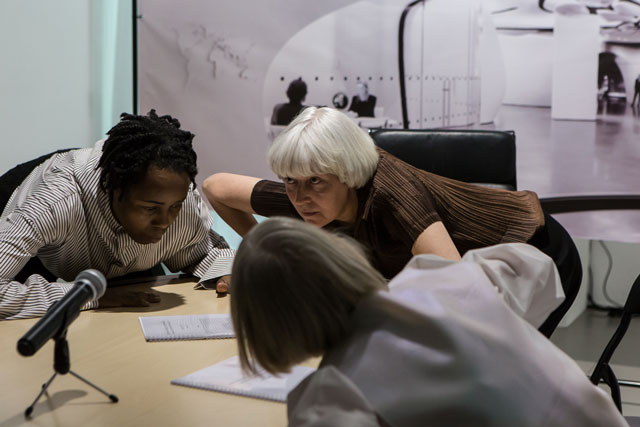 IS: – when, actually, opera is really trashy. That’s its big secret.

HMB: Exactly! Opera can be so outrageous to the point of camp, a litany of scandalous women dying from their own sexuality – it’s almost ridiculous to unpick. I recently saw Don Giovanni at the Royal Opera House, which the story of a rich playboy who seduces hundred of women. I mean, opera was mass market, and it’s full of really bad stereotypes.

IS: Like a soap opera. We could make an analogy: classical opera was the Sunset Beach of the 18th century?

HMB: Something like that. I enjoy the potential for opera to be seriously extreme – which makes A Harlot’s Progress so appropriate to adapt. And it turned out to be such a rich subject for a retelling. There have been others before me. For example, I came across a novel by David Dabydeen, which retold Hogarth’s tale from the perspective of a slave – a black boy in a turban – who appears in one of the paintings. It’s a postcolonial reanalysis that uses that image to open on to and imagine a whole life. I also began to think about the parallels between music videos and opera – 90s R&B for example – where narrative is told via music. 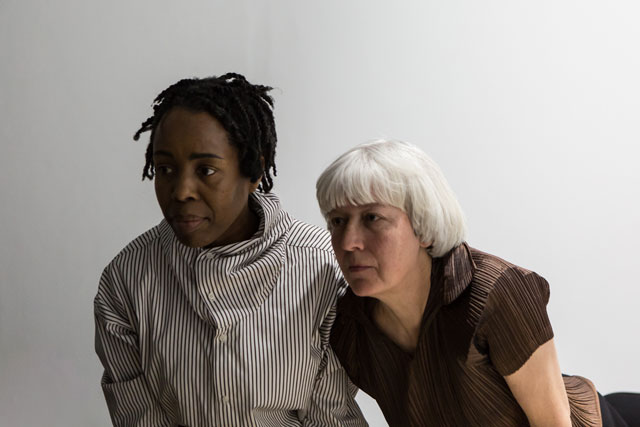 IS: R Kelly actually took on the genre – Trapped in the Closet is an opera in – so far – 33 parts.

HMB: There’s so much to play with. I wanted to build a set for A Harlot’s Progress, a stage to tell a new story. I have background props for television shows. One year, I did the Victoria’s Secret after-party. It feeds into the sci-fi vision – seeing women pushed to the extremes of hypersexuality. The models, they don’t even look human.

IS: War Room has a quite different set of protagonists: women in corporate boardrooms. These women are in spaces that are typically male.

HMB: I’d been doing a lot of research on types of parliamentary and governmental architecture, focused around the circle. I wanted to look at the circle in a semi-spoofing, conspiracy-theorist way, presenting research on the UN security council and the Reichstag, and creating a mythology about the circle, or boardroom culture, or democracy – and what it means to have this diagram of power and the decision-making process. One of my favourite films is Dr Strangelove (1964), and I wanted to replicate the set – which is impossible – the massively exaggerated circular table around which Stanley Kubrick’s black comedy unfolds, and world leaders discuss war. 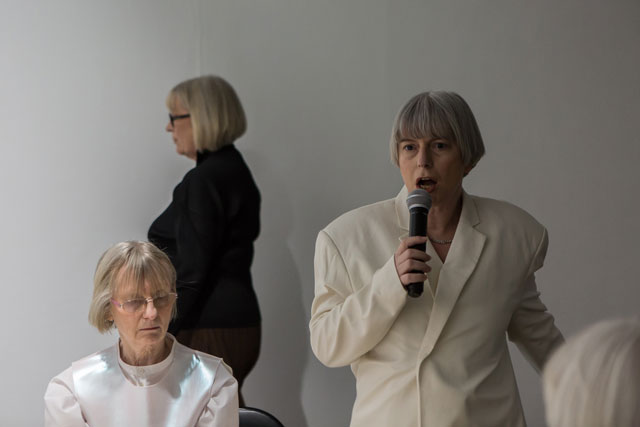 IS: The Telegraph’s office in London takes up an old trading floor above Victoria station. There’s a circular table at the centre of the office, and desks that run outward like rays, with people are seated according to their place in the chain. It’s the architecture of power, a kind of spaceship.

HMB: I’ve always been interested in diagramming rings of power. I had a children’s book as a kid, a fantasy sci-fi called The Wind Singer, set in a city that was built in concentric rings. For War Room, I had this vision of a boardroom table. I worked with a composer called Helen Noir, who wrote the libretto and introduced me to a lot of contemporary opera, from Anna Nicole (2011) to earlier postmodern operas such as Einstein on the Beach (1976). I also began a conversation with a duo dance company SISTA SISTA, and looked closely at gestures that people make in boardrooms, or during political debates, and we worked on performing hand gestures and micro power dynamics. I wanted to think about women, from Angela Merkel to Sheryl Sandberg and her Ayn Randian nouveau capitalism. There’s a way that women in positions of patriarchy are often seen as symbols of progress. Of course, it matters to have women in these positions, but I feel an ambivalence, too. 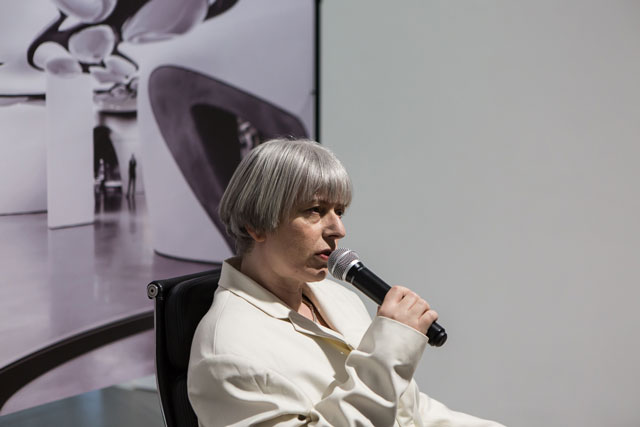 IS: You’ve described the work as an “abstract opera”. It is a set of ideas and gestures. Are you interested in anchoring it to a certain politics, a narrative? Do you want it to make sense?

HMB: I’m in the process of making a film and War Room is going to form a scene of that film. The idea is to add a clearer narrative – something that picks apart many of the things we’ve spoken about – architectural form, power distribution and the ambivalence of feminism in a corporate climate. I’m also investigating conspiracy theories – real and imagined – that link architectural form and collective power. I used the term “abstract” as a way of navigating the boundaries of traditional opera, but I’m not that invested in abstraction. I want people to be able to take something away from my opera. There are many ways to read it: as a critique of corporate business, or feminist gender roles, or the terror state.

IS: The dancers you work with all have grey hair – and there’s a question of age, ageism and the visibility of women in corporate space.

HMB: The women I worked with all, by chance, had the same haircut – silver bobs. They are from the Green Candle Senior Dance Company, which is in Bethnal Green in east London, and everyone is over 55. The War Room narrative is a phoney boardroom scenario. Helen Noir responded with the music, SISTA SISTA devised the choreography, and the Green Candle women dance. It was a very interesting and new way to work. None of the words from my script are ever spoken – and yet I created the characters, the mood and the structure of action. 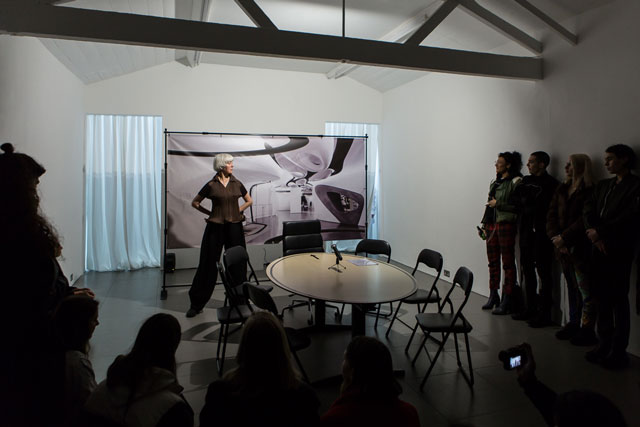 IS: It makes me think of Anthea Hamilton’s process – where she works with a bookmaker to make a boot, or whatever it is she wants to make. Collaboration is about exchange, but also relinquishing authorship in some way. Do you find it easy to let go?

HMB: I have been trained by working in film and TV, where everyone has a designated role – and nobody deviates. It’s important to learn to give over the power. Another of the elements of War Room is blockchain technology, which is about decentralisation. It’s another way of diagramming power, and there is preliminary research on how blockchain theory can be used in governance. It’s at once a kind of utopian idea, because of the decentralisation at its core, but at the same time, it presents a kind of streamlined capitalism. In blockchain, everything is transcribed into some kind of global document. Nothing can be deleted. It promises transparency, but also a solidification of ownership, surveillance, more commodification. The opera is also presenting the beginnings of a critique.