Haris Epaminonda: ‘I imagined the Cypriot landscape to be the main protagonist’

Haris Epaminonda: ‘I imagined the Cypriot landscape to be the main protagonist’

The artist talks about the making of her four-channel video installation Chapters, filmed in her native Cyprus, and the importance of the space in which her works are shown

by A Will Brown

The artist Haris Epaminonda was born in Nicosia, Cyprus, in 1980 and now lives in Berlin. She works in film, video, installation, photography, sculpture, text and collage. Her work is often presented in multipart installations made up of objects, collages and moving images taken from television and film, which juxtapose contemporary motifs with a series of fictional and real moments from untold and innumerable pasts. Epaminonda’s works distort reality to present mundane moments and objects in fresh and engaging ways through subtle manipulations in colour, composition, sound and duration.

A Will Brown: Do you have any forthcoming projects or exhibitions that are particularly exciting, or dramatically different for you?

Haris Epaminonda: I have just come back from a residency at the Hammer Museum in Los Angeles. We travelled in the Californian desert … amazing things to see out there … and, hopefully, there will be a film as a result of my research. Right now, I’m in the process of changing studio, about which I am really excited.

AWB: Can you tell me about the process of working on your four-channel video installation Chapters?

HE: It all started with a handful of vague ideas. For about two years, I was sketching thoughts, making drawings, diagrams, mood boards. From the beginning, I imagined the Cypriot landscape to be the main protagonist, located in the Mediterranean south. I wanted it to be a place before it was given a name: a place of light and shadow, of rough surfaces and reflections. Rocks and stones are everywhere. In the Sanctuary of Aphrodite at Kouklia in Palaepaphos, there is a large piece of stone, thought to be a non-figurative symbol of fertility worshipped by an aniconic cult. When I thought of the film, I always thought of this place as a gravity point.

The actual filming lasted for two weeks, almost without a break. It was a really intense experience. For the scale of the project, we were quite a small crew – about 10, together with Andre Zivanari, the producer and a close friend, without whom this whole project would have not been realised. At first, we designed costumes and had them produced. Some were lent by the National Theatre of Cyprus. We gathered different objects, some found in Cyprus, others gathered from all over. There is a room to which the film returns over and over, a whitewashed space, worked on and treated like a white canvas. Throughout the film, we had a lot of discussions: there were these two questions rubbing each other … how can you tell a story and, at the same time, have all the elements exposed as individual and somehow independent parts? How can you tell a story through objects or via interaction with objects? People were performing tasks, acting as mediators, at times being mere symbols. Most of them were not professional actors. There were no rehearsals, no script, and most was improvised on the spot.

AWB: Can you describe some of the specific scenes in the work?

HE: It is dark. A man begins to dig a hole in what seems to be an empty, arid landscape. The sun rises and he continues till the sun sets, in the end forming a large sand heap right next to him. On another screen, the same figure walks across sandy ground, leaving footmarks. Somewhere else, a woman sits inside a room without windows or exits, facing the camera. Outside, a stone falls on to the ground, crashing to bits. For a short moment, birds draw their lines in the sky.

AWB: Can you tell me how the figures, settings, ideas and costumes relate to Cypriot and regional (and general) mythology?

HE: It is rather a subconscious sense of a place, one that spreads invisibly over multiple aspects of different cultures and regions.

AWB: Would you say that you were constructing a new, yet archetypal and historically grounded, mythology for Cyprus, a land surrounded by ancient mythological landscapes – Greece and Italy – at least, these are the commonly told myths.

HE: No, not really, I didn’t think of it this way.

AWB: As your career has progressed, what are some of the biggest shifts in both your working methods and how you approach ideas? Have specific exhibitions of your work provided a dramatic shift for you in these areas? I’m interested in how the reception of your work has given you new insights or perspectives.

HE: I can’t really see dramatic changes in my work. I keep switching from film to sculpture and installation, from three-dimensionality to flatness and vice versa. I sometimes alter spaces in order to shift the attention from object to space. In all, my work is very personal. I have always been driven by intuition.

AWB: What are the most compelling ideas out there for you today. What kind of things, places, people or ideas do you find yourself drawn to?

HE: Thousands of people have already signed up to leave Earth for good on a one-way trip to Mars!

AWB: You work in video and installation, often in combination. What separates a video, seen more traditionally, from a video installation for you? When is it necessary to give a video more deliberate surroundings in your work?

HE: I see film more as something that should be experienced solitarily and empirically in space. It can be quite a somatic experience.

AWB: When I showed Tarahi IV, V, VI at CCA Wattis Institute for Contemporary Arts [in San Francisco] as part of the Cinematic Moments exhibition, you worked with me to make a three-channel installation of the work on monitors, where it is normally shown in room-size installations. I think our solution worked quite well. Do you find yourself imagining the montage for a work first, or the setting or media – monitor, projection, installation? When does the content dictate the setting, and the other way around? I ask because your work is often so sensitive to space, and the composition of space, that shifting a display method must be trying.

HE: Yes, it was good to experiment with it and to see whether the work had the same resonance when shown on monitors. I suppose, eventually, it becomes something else, which is not necessarily bad. Still, one gets a very different experience when being in a room in the dark surrounded by screens than by standing in front of monitors. When the work is a single film or video, it is much more flexible in terms of ways of showing, or its relation to space, though even in this case I am quite particular with the way it should be presented. But as in the series Chronicles, for example, I am very specific about how the works should be shown, positioned, sized, and so on, as the presentation is as much part of the work. In this case, I feel the room (colour, architecture, light) should be such that it would enhance the experience of viewing, to keep the projected image more vivid, and to make sure that the viewer can only see one, or maximum two, screens at a time. So I often have to build extra walls and divisions. The same applies to the sound quality in the space, as sound is an integral part of the work. I often speak with the musicians I have been collaborating with for some time now – Kelly Jayne-Jones and Pascal Nichols – who have precise ideas of how the sound should be adjusted, so as to avoid too much reverberance and so on.

AWB: How do you approach your audience when making a video or installation? What are some of the key differences for you between creating in each form?

HE: I consider the exhibition space as part of the work – not only the occupied zones, but equally the empty gaps, rhythm, distances. In a Japanese garden, nature becomes representation, points of contemplation and reflection, seeing something outwardly manifesting itself as an intense internal experience. At times, one can only see a piece from a fixed vantage point of view or, on another occasion, you are forced to walk around the corner, or make a turn. There is this choreography of things, and a sort of filmic quality to the way one navigates through space, as in the way one tries to put all the disparate scenes together to make some sort of sense. A lot is improvised in the space, if not most; the way the elements and pieces end up as constellations, for example. I see film and video in a similar way, collecting the material I shoot or find (in the case of earlier works), and then putting them together in a quite intuitive way, usually drawn by a tempo or a sense. In both cases, it is the way things are juxtaposed with one another, the way they speak to each other, or how they are rearranged in space or on the timeline, that creates tension, voids or moments of calm. The work is done in a specific space at a specific moment in time, and it can never repeat itself in the same way. [It is] perhaps closer to a performative act – elements dancing together in time and space – which the viewer is invited to join in. It is space that defines the boundaries, on a macro or micro-level.

AWB: What exhibitions, shows, or artworks have you been looking at or gone to recently? Have you seen an exhibition or an artist’s work that you felt strongly about?

HE: I regret that I missed Pierre Huyghe’s recent show at the Los Angeles County Museum of Art. I was on my way back from Las Vegas and got stuck in crazy traffic. Next morning, we flew back to Berlin. 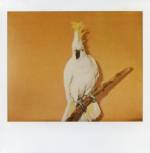 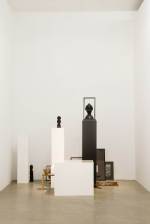 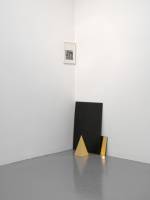