Fiona Tan explores domestic environments through video and installation across two parallel exhibitions at Frith Street Gallery in London. The works displayed show Tan’s desire to archive and document space in an attempt to bring order to a tumultuous contemporary existence

Fiona Tan (b1966) occupies the two Frith Street gallery spaces at Golden Square and Soho Square with her video essays and installation work that lies between art and documentation. She creates eerie microcosms that question what domestic objects and space mean to humankind in the current climate of unpredictable incidents. The journey between the two different architectural spaces of the galleries creates an interesting reflective process on the works she presents.

The Soho Square gallery, a friendly wooden-floored town house, has been transformed into a domestic space with a cosy armchair and slippers, and a pair of glasses folded on a desk. It is a humble abode of thin rugs and frugal belongings, yet the items – from books to cheap collectable trinkets – are all arranged with obsessive care. Newspaper cuttings are stuck neatly on the walls, their turbulent headlines announcing natural disasters and global strife. There is a sense of temporality, yet the collection of objects shows the passage of time.

This installation is the setting for the three video works Ghost Dwellings I, II and III (2013-2014), originally commissioned by Rabobank in the Netherlands for Tan’s solo exhibition Options and Futures. In the works, each of which is less than five minutes long, she explores abandoned settlements in Detroit, Cork and Fukushima.

She ventures inside vast empty buildings in the US city of Detroit, where complete neighbourhoods were deserted when the city’s population fell by 25% over 10 years due to economic stagnation. In documentary style, Tan’s footage flicks through angles showing dark corridors, wide roads without traffic and electricity wires cut off and dangling.

Across the Atlantic, in the suburbs of Cork, Ireland, nature has begun to reclaim detached, one-storey homes built of large, grey thermal blocks, their structures unfinished. Curling branches and thorny stalks surround low brick walls and yellow gravel driveways that have never felt the crunch of a family car pulling in. Tan reduces bricks and mortar to their bare material essence. Without inhabitants, these buildings are devoid of the symbolism that we invest in a family home.

The third Ghost Dwellings piece is set in Fukushima, Japan, where an earthquake and tsunami followed by nuclear disaster devastated the area. The domestic landscape of empty homes seems frozen in time. Objects lie worthless without their owners. Dishevelled by the elements, ripped curtains flutter in the breeze, the wind rockets past a stack of DVDs and, in a garage, a roof has fallen in smashing onto the car within. The scenes are chilling and apocalyptic.

An inverse concept to the Ghost Dwellings works, the installation in the Soho Square gallery is a laboratory and a study of nomadic living. Instead of building blocks, Tan shows the simple and portable belongings that lie closest to the survival of the occupant; a sleeping bag, a glass of water, blankets, a radio, tools. A figure hurries through the room, head down, wearing several layers of clothing. Surprisingly, it is Tan herself, her short hair grown longer, avoiding eye contact the day after opening night. It is an unplanned performative moment in which she is unaware that she has become a part of her own installation. Tan has traversed between homes and cultures a few times: she was born in Indonesia, brought up in Australia, and settled in the Netherlands, so it is a topic that has informed her body of work. A feature film titled History’s Future, due to be released later this year, tells the story of a man on a journey through Europe searching for his identity after losing his memory following a mugging. In Vox Populi (2012), commissioned by the Photographers’ Gallery in London, Tan pieced together a mottled collection of Londoners’ family photographs into a varied album of social history.

Pushing opening the heavy door into the modern concrete floored space to the Golden Square gallery is a very different experience from entering the Soho Square space. The gallery is dark and empty, like the echoing rooms in Detroit, and the visitor must walk through this void of space to reach the projection on the far wall.

Tan’s work, titled Inventory (2012), takes us behind closed doors at the John Soane’s Museum, London. Soane (1753-1837) was an English architect who created a space in which to live and work at Lincoln’s Inn Fields in the Bloomsbury area of London. The house was also a cavernous museum for his collection of objects acquired over his lifetime, from heavy stone busts to wrought-iron chairs. It is a chaotic shrine to neo-classical motifs that awes the tourists and locals alike, who have queued up to visit.

Tan captures some intriguing closeups of the curious expressions on crumbling stone faces and fish-eyed reflections in convex mirrors using a variation of formats (super 8, 16 and 35mm film, and analogue, digital and high-definition video), which are projected on to an uneven grid of irregularly sized frames. As the titled suggests, Tan flattens Soane’s collection into a digital index archived for future generations, where the intense aura of the physical space doesn’t translate. Through the lens, the historic objects appear like tacky props in a low-budget film. Like the things lying useless in Fukushima homes, these objects are idle shells with their uses no longer valid. The sound is the only trope that adds a layer of intensity to this piece, a fading classical strings composition that gathers momentum, becoming richer and stronger, and then stops. Unlike the earlier documentary-style pieces, which create intensely emotional feelings of loss and abandonment, this work is cool and detached, presented like a contemplative visual essay meditating on the human need to acquire and collect, almost as a compulsion.

There are many interesting comparisons between the nomad, Soane and Tan. A neat line of transient souvenirs, a haphazard display of artefacts, or a body of documentary artworks, each auteur works with an archival process. The process even surpasses time, status and duration in a universal attempt to find order and control within a physical world that is often governed by non-physical and uncontrollable happenings.

Tan creates an immersive experience through installation, film and the very architecture of the gallery spaces, which helps to take the viewer on a surreal, sometimes apocalyptic and haunting journey, from space to space. Within these environments, she reduces domestic objects to their material essence, questioning the psychological meaning with which we endow them, the impressions we make, our powerlessness and the temporality of our mark. 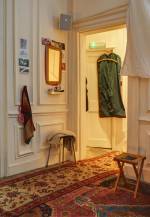