Hansjörg Mayer – interview: ‘To handle and open and read the books ... that to me is a very important thing’

Hansjörg Mayer – interview: ‘To handle and open and read the books ... that to me is a very important thing’

Poet, typographer and publisher Hansjörg Mayer and the computer art pioneer Frieder Nake talk us through this major exhibition of Mayer’s works from concrete poetry to radical typography to artists’ publications

Situated west of Potsdamer Platz and behind the New National Gallery, the Kunstbibliothek offers an ideally cool, minimalist setting for this first major exhibition in Berlin of the works of Hansjörg Mayer. Mayer is best known as the publisher of more than 300 titles, including artists’ publications, ethnographic books and exhibition catalogues, working with some of the leading in 20th-century art and text-related practices. 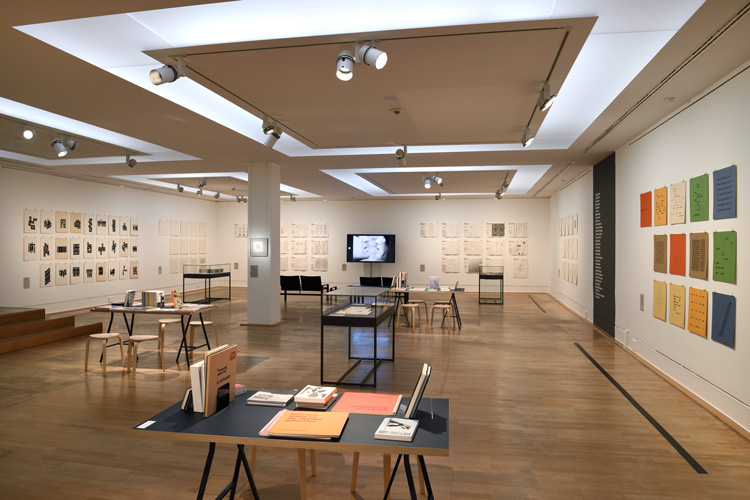 Two long lists on the gallery walls reflect the numerous artists and poets with whom Mayer published titles in the 1960s and 70s. His closest collaborator was the artist and poet Dieter Roth, with whom Mayer made more than 100 works, many of which are on display in this exhibition. As well as becoming an acclaimed concrete poet, whose works featured primarily alphanumerical elements, Mayer also typeset and printed the works of many others prominent in the international concrete poetry movement, including Eugen Gomringer, Ian Hamilton Finlay, Dom Sylvester Houédard, Franz Mon, Emmett Williams and the Brazil-based “noigandres” poets. 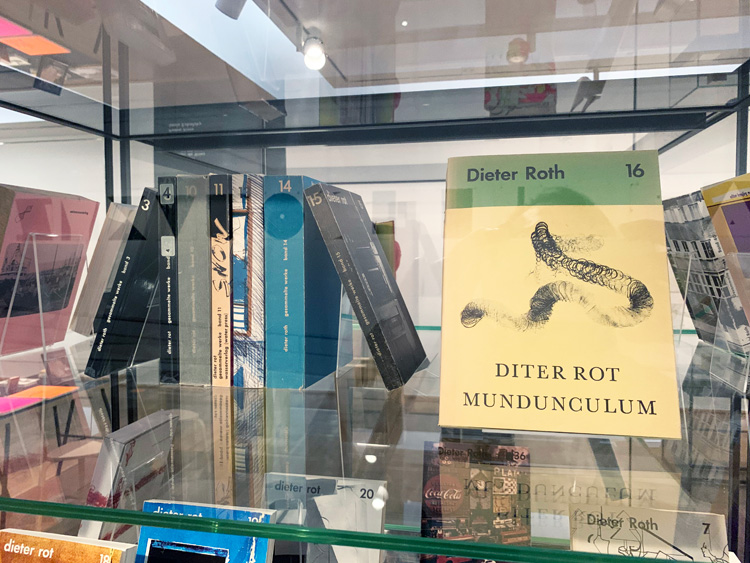 He has consistently been associated with an internationalism of approach to cultural understanding that takes account of difference and context, yet visually communicates across borders, as with his frequent use of the Futura typeface in the 60s. This became, in many ways, synonymous with Mayer’s small-press, independent imprint edition hansjörg mayer, that he set up in 1964, when he was 21 and living in Stuttgart, where he was born in 1943. In 1966, he moved his primary place of residence to London, where he still lives today. 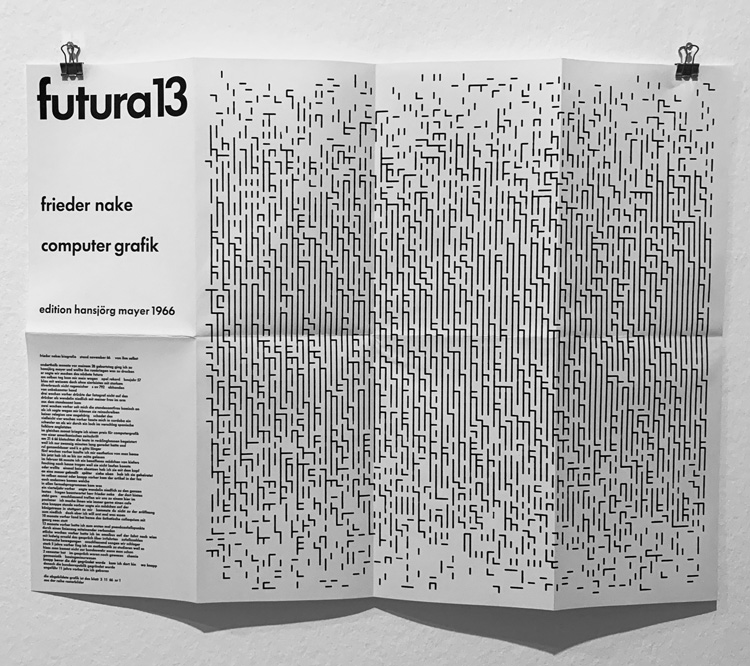 Mayer was the son of a master typographer and grandson of a master printer, whose print factory was destroyed in a direct hit by allied forces in the closing years of the war. His father, Karl Mayer, opened the Staib & Mayer printing works (a name now synonymous with collectible artists’ publications) shortly before his sudden death in 1953. As a child, Hansjörg Mayer grew fascinated by processes of printing and typesetting; as soon as he could leave school, he undertook professional apprenticeships in both areas. At the same time, he began studying at the Technische Hochschule in Stuttgart, where the philosopher, scientist and poet Max Bense, an early information theorist, encouraged his students to experiment with the nature of language, including poetry, in relation to new systems of communication, semiotic and systems-based thinking. Mayer swiftly became known for the dynamic yet precise nature of his typography, in which he elevated the materialist qualities of printing (ink, paper and depth of imprint of hot-metal typesetting), as well as engaging in radical disintegrations of semantic form, as is evidenced here in the beautiful display of works he made as a solo poet. The exhibition also includes many breathtakingly radical typographies that Mayer created for others, sometimes in collaboration and sometimes doing exactly what they wanted. 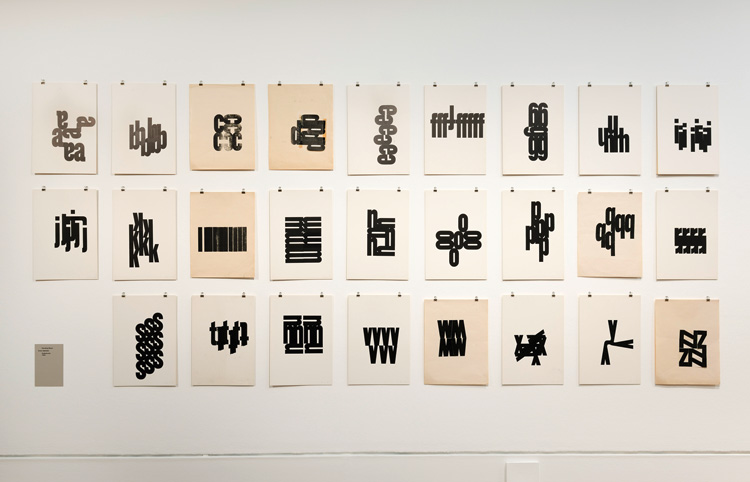 Much of the material on show was acquired in the 70s from Jasia Reichardt, a leading figure in the 60s in terms of the crossover between concrete poetry, typography and computers, who organised the Cybernetic Serendipity exhibition in 1968. Mayer lived in Reichardt’s house in London when he first came to England, during a period described by Richard Hamilton as one of “technical revolution”, where the traditions of hot-metal typesetting were being superseded by processes of photocomposition.

Within Mayer’s titles of the period, we see multiple examples of his exploration of these transitions. Available for reading in the Kunstbibliothek gallery are books made by students at Watford College of Art, where Mayer worked in late 60s and 70s. These convey a highly experimental approach to using (then novel) photocomposition processes. Also on display are prints from Mayer’s third concrete poetry portfolio, made in the letterpress studio at Bath Academy of Art in Corsham. They feature British, American and Canadian poets and were typeset in collaboration with a selected group of Mayer’s graphic design students. 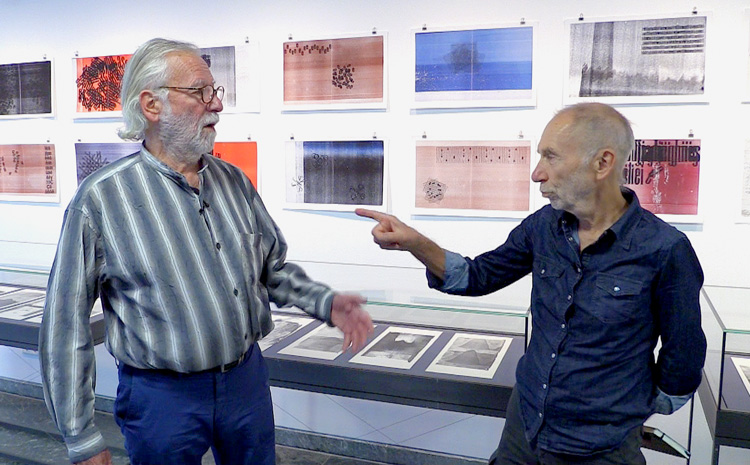 Hansjörg Mayer in conversation with Frieder Nake at the opening of Hansjörg Mayer: Typoems and Artists’ Books at the Kunstbibliothek, Berlin, 25 October 2019. Photo: Martin Kennedy.

Studio International met Mayer and one of his early collaborators, Frieder Nake, at the exhibition. As we toured around, the pair explained how the works related to the context of the 60s, recollecting a groundbreaking period where analogue forms converged with digital thinking, and a context of international construction built on nationalist destruction. Both were students for a time under Bense, who fostered some of the world’s first experiments in computer art practice. 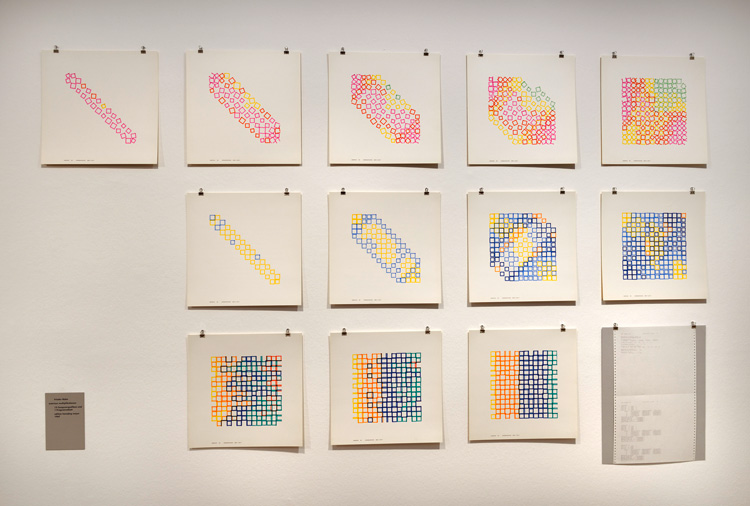 They begin their dialogue in front of 19 Typographies, published in early 1962, when Mayer turned 19. These were his first works that he considered to be poetry. Moving through the exhibition, Nake and Mayer talk us through two works they made together. These involved random computer drawings in conjunction with letterpress and offset techniques, fusing into a hybrid that seems a perfect fit for our post-digital condition. This multisensory approach to compositions involving computers in the 60s counterpoints the smoothness and flatness of today's digitised surfaces. In this exhibition, we can revisit an early point of intersection between the poetic and the technological. We also encounter a specific period of cultural history through the immediacy of a materiality that leaps off the page. 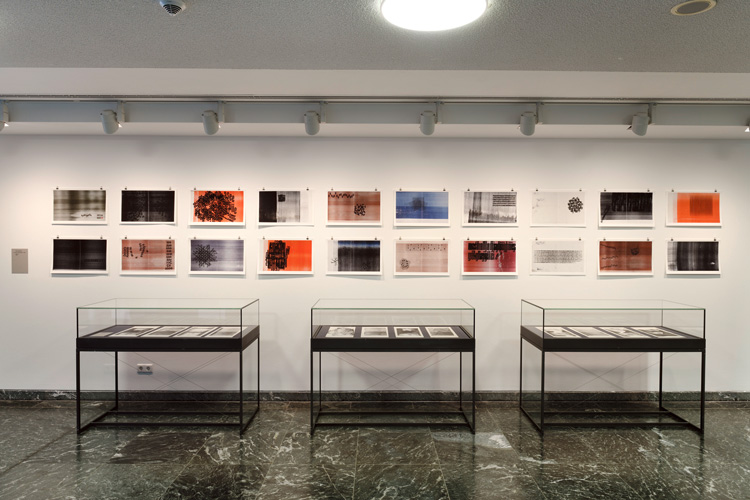