Chance and Control: Art in the Age of Computers

Chance and Control: Art in the Age of Computers 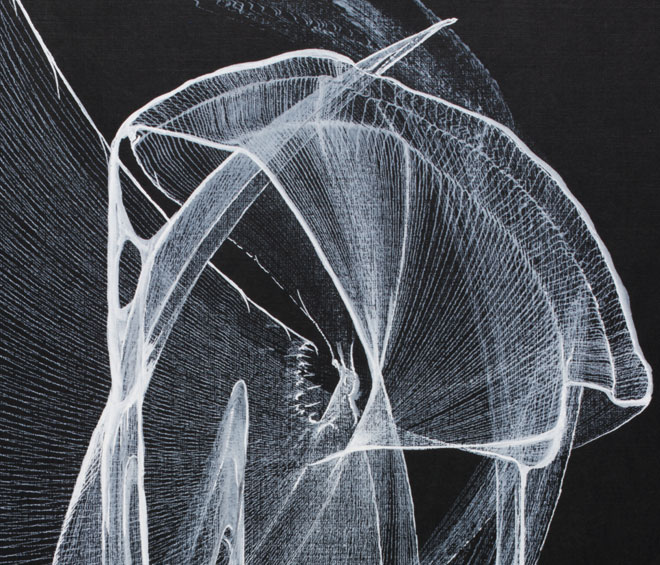 On a hot day in a crowded Victoria and Albert Museum seemingly gone mad with Frida Kahlo, it is a relief to go upstairs towards the traditional painting galleries to room 88a and gaze at the cool, well-ordered and often minimal works by artists who write code to draw. Organised in-house and taken from the museum’s own computer art holdings, Chance and Control: Art in the Age of Computers is a beautifully curated display of “artists and programmers [who] have used computers to create prints, drawings, paintings, photographs and digital artworks that explore aspects of chance and control”.1 What is immediately apparent is the remarkable diversity of this collection and how it has grown from early beginnings in just 10 years. 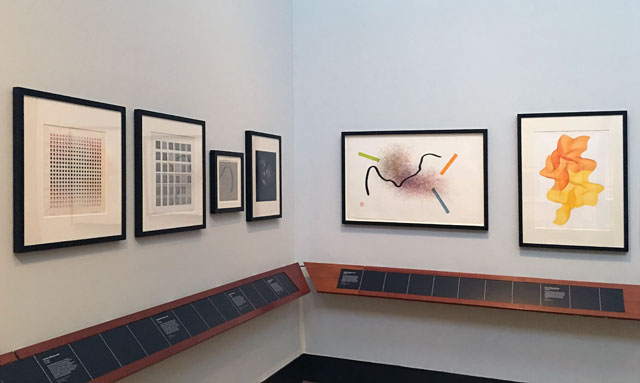 The V&A has previously mounted displays of this collection, most significantly Digital Pioneers (2009-10) for which it published a small book of the same name, but this exhibition demonstrates the depth of the current collection and the extent that donations and acquisitions have enriched it. It now encompasses more work from Argentina and Brazil, in addition to enhancements in the holdings of European, American and English artists. This exhibition truly showcases the museum’s impressive riches in this field. 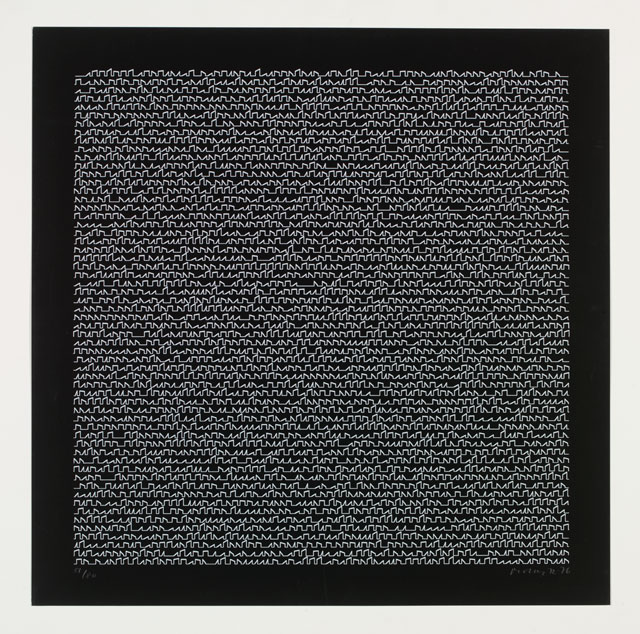 Manfred Mohr. P-122, from the portfolio ‘Scratch Code: 1970-1975’, published by Éditions Média, screenprint after a plotter drawing, Paris, made 1972, printed 1976. Given by the American Friends of the V&A through the generosity of Patric Prince. © Victoria and Albert Museum, London.

These are visually stimulating artworks, hung with great care – everything has been specially (and impeccably) framed for this exhibition. With the exception of one film by Analívia Cordeiro, M3x3, shown on a small screen, all are 2D works on paper. Arranged chronologically, the exhibition starts in the 1950s with two images by Ben Laposky and Desmond Paul Henry, who used analogue devices (seen as precursors to computer art of the 60s), and continues with the major American, British, Japanese and European pioneers of algorithmically based art, including Colette Bangert, A Michael Noll, Vera Molnár and Manfred Mohr, to early, middle and late period Harold Cohen, and many others up to the present day. Although there are gaps in the display, particularly of the last 20 years or so, this doesn’t detract from the quality of what is presented here. Several of the historical pieces are on view in a public museum for the first time, for example Clive Richards’ 361 Cubes (1973), made at Coventry Art School, and Darrell Viner’s plotter drawing Untitled (c1974) made in the Slade School of Art’s innovative experimental department. 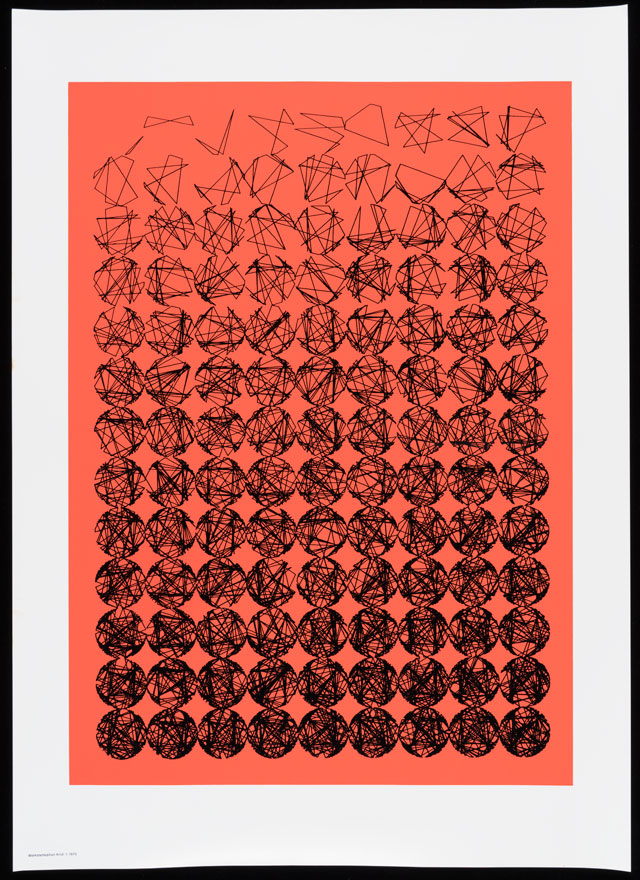 In the early days, it was an extraordinary idea to use equipment such as flatbed plotters with instructions written in languages such as Fortran, that were not designed for artistic or creative purposes. Outside the mainstream art world of the time, many struggled to gain recognition.

This survey is ideally timed to coincide with the anniversary celebrations of the Cybernetic Serendipity exhibition, held 50 years ago this summer, at the Institute of Contemporary Arts in London. This groundbreaking show was the first comprehensive international exhibition in Britain devoted to exploring the relationship between the arts and new technology and featured collaborations between artists and scientists. It laid the foundation for decades of advancement, how much so is apparent in the work of subsequent generations on view in this V&A homage, including Damien Borowik, Fabrizio A Poltronieri, Casey Reas and Esther Rolinson, all of whom are in their 40s.

The V&A acquired its first computer work in 1969 following Cybernetic Serendipity – a folio of the limited-edition prints published by Motif to coincide with the exhibition and William Fetter and Charles Csuri’s works are on view here. The title Chance and Control references Cybernetic Serendipity’s emphasis on discovering the serendipitous “happy accidents” that inspired curator Jasia Reichardt in 1968. An apparent dichotomy – control being the opposite of an accident, is a reference to the precise and logical nature of the process required by artists who write algorithms. However, working with code does give the capability to produce random events; pseudo-random number generators can be introduced into the program to produce unexpected elements within a planned structure, thus continuing the modernist love of accidents and the role of chance – key components of artistic process since the time of dadaism, Duchamp and surrealism. Computing also allows the possibility of producing sequences through iteration, the repetition of sets of instructions in the code that can be adjusted so that each version is slightly different. Perhaps that is what makes computer art so fascinating, this interplay between logic and the happy accident. In Mohr’s words: “That a non-visual logic will create a visual entity is what is so exciting about this process.”2 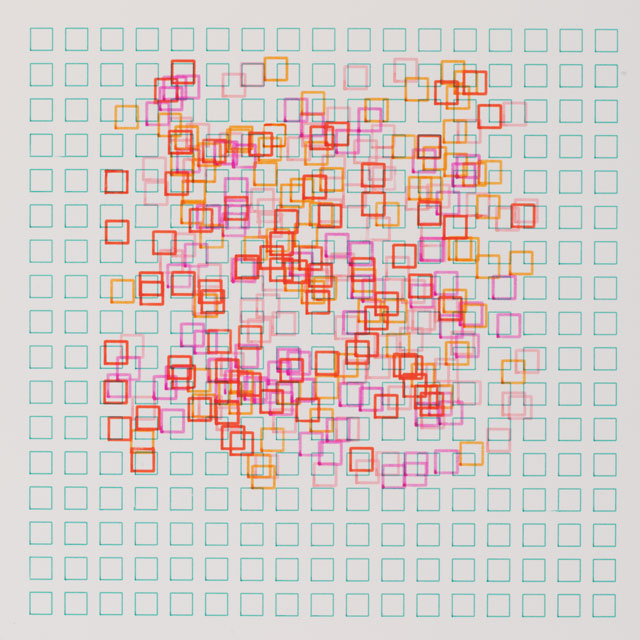 This is seen to great effect in Quadrate Werden Rot (1966), an important set of four plotter drawings by Frieder Nake, acquired by the V&A with assistance from the Art Fund. Viewing “sets” like this by Nake and another similar display here of four pieces by Noll, enables close study of the progression of the artist’s process. It is not often the gallery-goer gets to see such works displayed together, and I would urge all visiting London to take advantage of this opportunity.

Some fun ephemera from the V&A collection to look out for include Aaron Marcus’s microfilm card (1967) from his time at Bell Telephone Labs and Mohr’s stack of punched cards (1970) used at the Meteorology Institute in Paris. The first edition (August 1968) of London’s famous listings magazine Time Out, is also here, featuring a computer drawing on its cover by Donald K Robbins (who knew?). 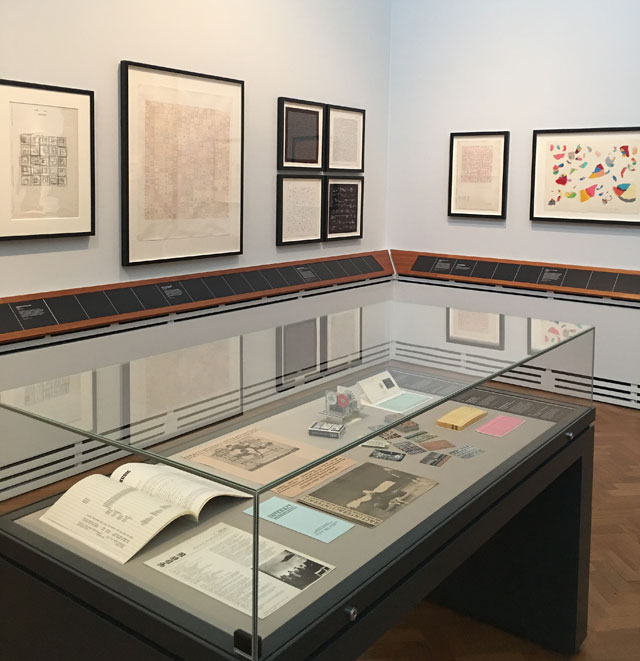 The core of the V&A’s computer art holdings is the collection of American art historian Patric Prince, donated via the American Friends of the V&A in 2008 and consisting of about 200 pieces of art together with associated documentation. This was shortly joined by the archives of the Computer Arts Society, again consisting of works on paper and related records.

The Computer Arts Society was founded in the wake of Cybernetic Serendipity by a group of like-minded people to promote the creative use of computing, for exchange of information, networking and exhibition opportunities. It was the first practitioner-led organisation of its kind in Britain and covered arts including poetry, dance, performance and architecture. By 1970, CAS had 377 members in 17 countries.

Both of these major donations came about because of the CACHe (Computer Art, Contexts, Histories, etc) research project at Birkbeck, University of London, which in 2002, began the process of writing the history of British computer art, a hitherto ignored subject. The CACHe project, of which I was a member, approached the V&A in an attempt to locate a home for artworks and an archive items of which we found ourselves serendipitous custodians. 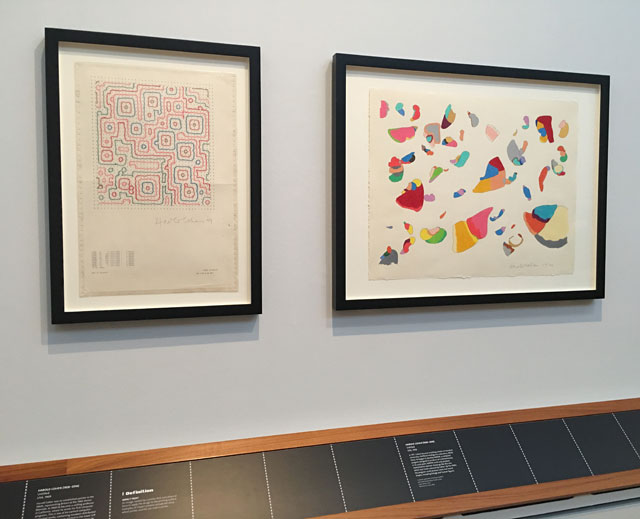 Why computer art should have found a natural home at the V&A is indicated by the institution’s history. A Victorian powerhouse of craft, technology, art and education, its ancestor is the 1837 Government School of Design, which provided the first publicly funded art education in Britain. Together with its subsequent branches, these schools taught both art (based on the “high” art of figure drawing) and design (using the latest technology) in one place. The museum’s initial collections were derived from the objects used to support the school’s teaching. Further, the museum’s location in “Albertopolis” (Prince Albert’s brainchild, born out of the 1851 Great Exhibition – which itself mixed fine art with practical design and technology) contains the greatest metropolitan spread of arts and science institutions in the world. This history stems from one great Victorian vision of the arts and sciences integrated with society in a didactic way. 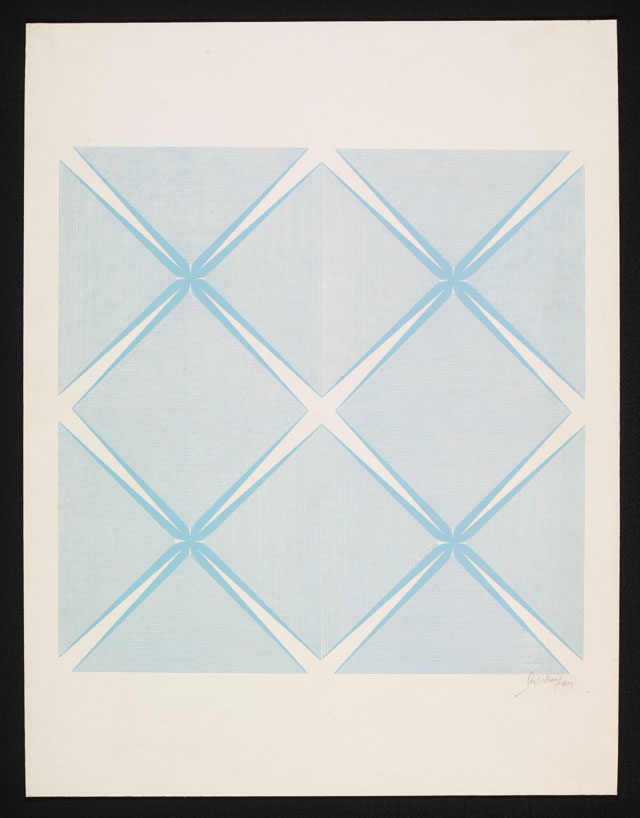 The two core collections were joined by items donated by artists or their estates. Those who had felt overlooked by the wider art world were now part of a national collection, the first of its kind in a publicly funded British museum. Today, the V&A contains the largest collection of 2D computer works on paper in the UK.

Chance and Control makes for an interesting comparison with another exhibition elsewhere in the museum, The Future Starts Here. The section on the future of the home poses the question: “Could your toaster turn against you?” and the exhibition promises the latest design in smart objects, artificial intelligence, synthetic biology and space exploration.

How times have changed. In the 60s and early 70s, technological progress was seen as a force for good – utopianism, in a modernist sense. In Britain, this was expressed in 1963 with the then Labour leader Harold Wilson’s “white heat of technology”3 declaration that acknowledged the positive power of science and technology for pushing the country forward.

Today, we are faced with a pervasive digital world and we see daily examples of society grappling with difficult questions of how to understand and deal with the fact that nearly all aspects of life are dominated by technology. How refreshing it is go back to a more innocent time for a short while in the company of those pioneering artists. We may not immediately find any satisfactory answers to our big issues, but perhaps art can remind us to keep asking and challenging the status quo.

• Catherine Mason is a board member of the Computer Arts Society and the author of A Computer in the Art Room: The Origins of British Computer Arts 1950-1980 and co-editor of White Heat, Cold Logic (MIT, 2009) catherinemason.co.uk 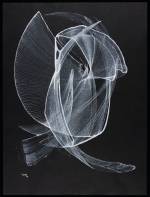 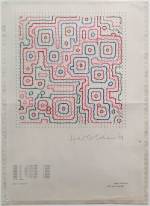