Hans Haacke’s “All Connected” at the New Museum is a retrospective featuring his major kinetic, social and political artworks 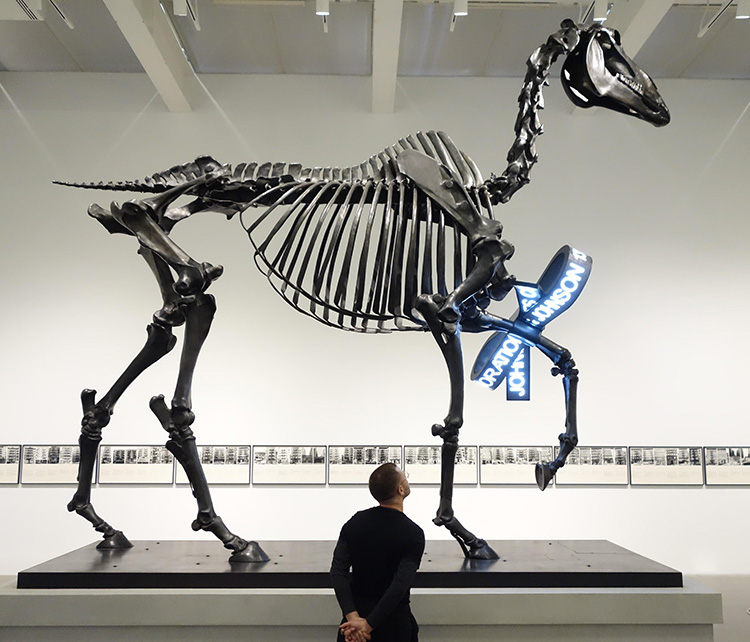 Born in 1936, the German artist Hans Haacke is recognised for his social, political and kinetic installations. He attended the Tyler School of Art at Temple University in Philadelphia, funded by a Fulbright grant. He also studied under Stanley William Hayter, the influential painter and printmaker. Towards the end of the 1960s, Haacke was focused on creating kinetic works, but with the growth of social movements and the assassination of Martin Luther King, he decided to focus also on the “fraught social and political world”. His social and political art exposes local and international corporations, as well as wealthy individuals who sponsor exhibitions. 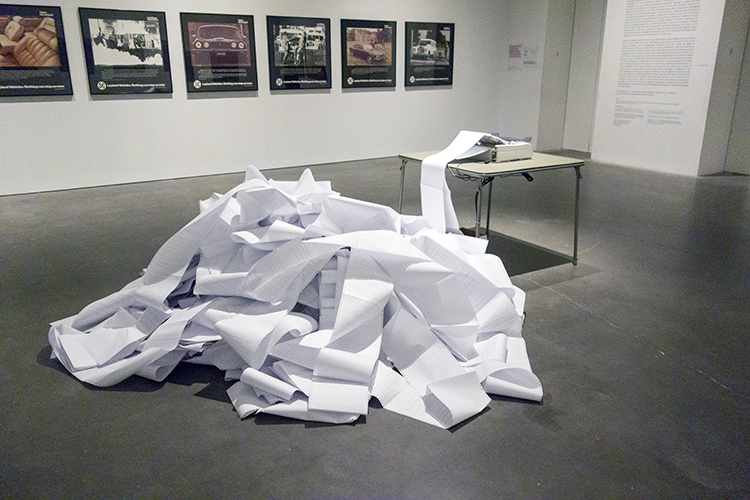 The Hans Haacke: All Connected exhibition at the New Museum showcases Haacke’s controversial social-political work and his kinetic sculptures. The retrospective includes kinetic works, photographs and installations from the 60s to now. Haacke’s kinetic pieces allow visitors to interact with the always-changing artworks, while his more widely known art installations offer a contrast to the thoughtful and playful sculptures with a more serious, intricate, detailed set of pieces. The information they provide leads one to think with a new perspective on the powerful and influential. 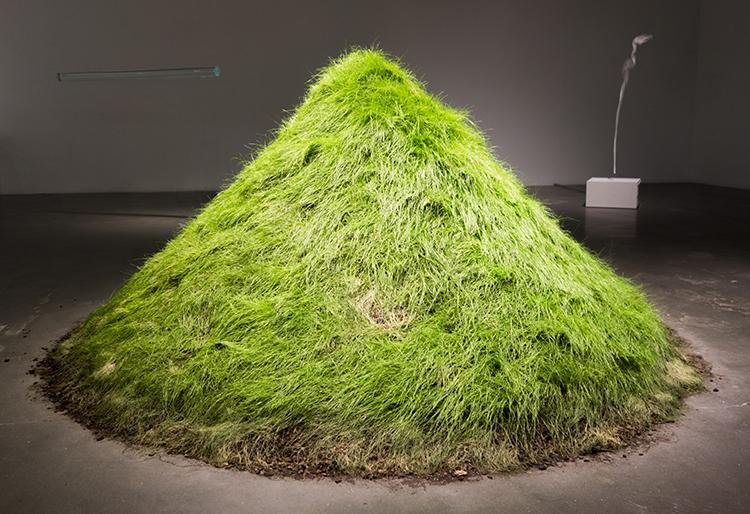 Haacke’s exhibition occupies four floors of the museum. Different types of artworks are displayed on each floor, so visitors gain a different experience moving from one to the next. The second floor exhibits his kinetic art; there you find earlier works, including Condensation Cube (1965) and Grass Grows (1969). The importance of these sculptures is in how they perform within their setting and the way Haacke sees his kinetic works, ever changing with him having little or no control over them. The third and fourth floors are dedicated to the social and political installations Haacke has created through the years. These critique corporations and individuals, some of whom even monitor and control what is shown in museums. By displaying who controls the art we see, Haacke hopes to engender a new understanding of art in the modern day. The fifth and final floor is dedicated to Haacke’s use of data through polls; the information collected since 1969 displays the change of times as well as the politics of the time. Haacke collected this data for the sake of creating an image of the culture of which we are a part.

Haacke compares kinetic art to a living organism, something that is always changing. When you step into the kinetic exhibition, it is similar to entering a forest. Every installation you encounter feels like a new life form, one that Haacke created but cannot control. Grass Grows is the perfect example: to start, he simply made a mound where he planted grass and, from then on, he had no control of it – it might grow, or it might not. 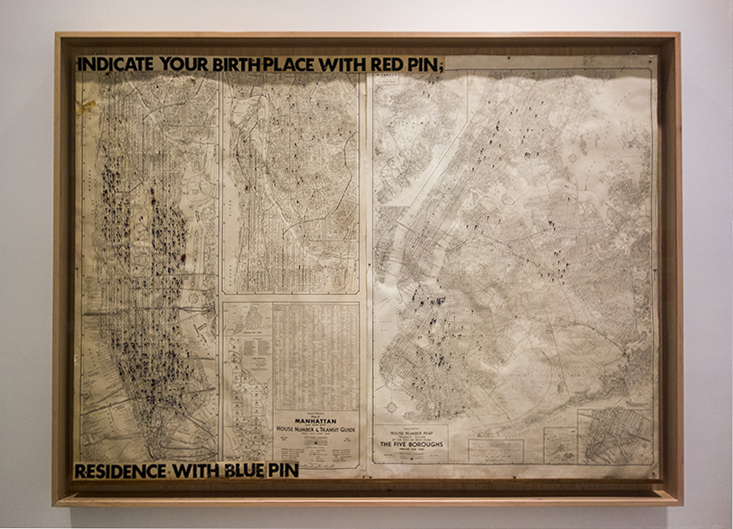 That unpredictability is the beauty of kinetic art. His 1969 piece titled Gallery-Goers’ Birthplace and Residence Profile, Part 1 also shows changes and movements, but in a different way. He asked visitors to his solo exhibition at the Howard Wise Gallery to stick pins on a map of Manhattan, red ones to show their birthplace and blue to show their current residence. There is no telling which red pin corresponds to which blue one, but the map is a presentation of motion.

Entering the third floor, visitors are confronted with Haacke’s large State of the Union installation from 2005, and in front of that his News installation from 1969. State of the Union, a flag of stars resembling a portion of the US flag, half hangs from the ceiling with the rest lying on the floor. The News installation is an automatic typewriter that prints the latest published news. Although the works were done in different periods, the messages they carry still apply today, one of division and one of constant information. 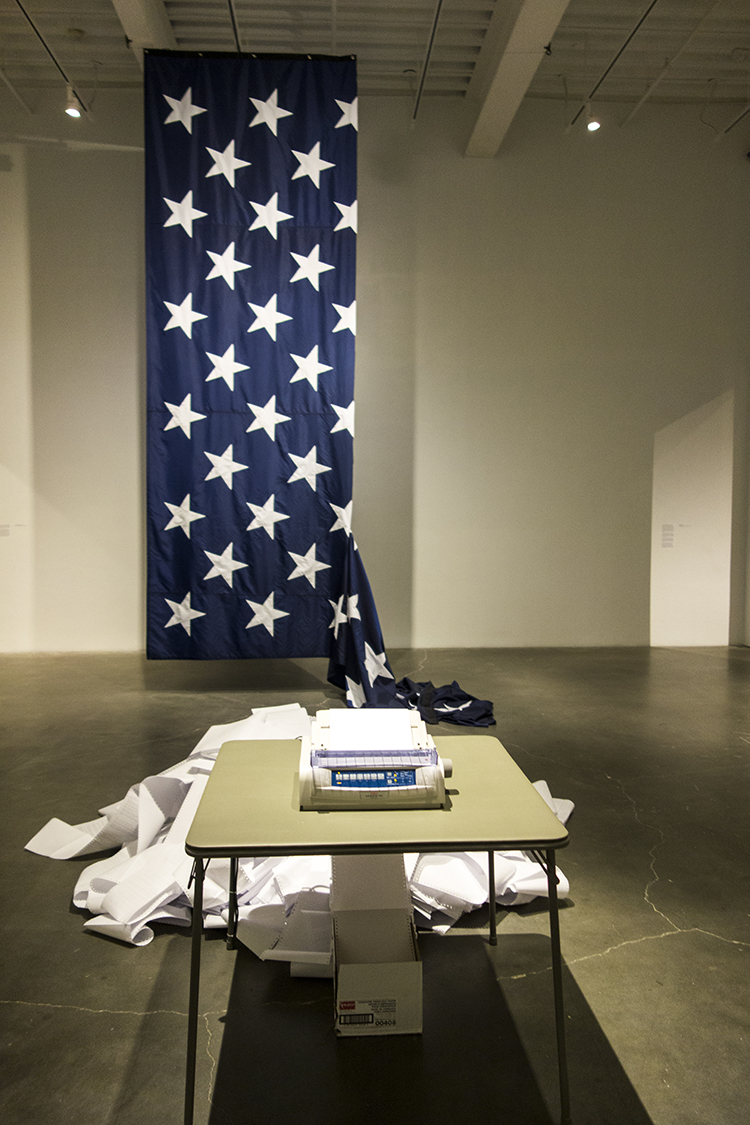 By positioning these two artworks together, Haacke conveys a divided nation being fed with constant breaking news. There are a few ways for news to be procured, but the news that is always shown is the appalling kind. A constant intake of bad news not only drains happiness from society, but also makes people worried and mistrustful, further dividing us. Haacke lays the information out like a foundation, but it is up to us to build on it. No news is good news.

Haacke noticed that, in 1981, the Mobil Corporation controlled about 20% of the petroleum market and was working with the apartheid-era government of South Africa, while at the same time sponsoring exhibitions of African culture. His piece MetroMobiltan (1985) is a criticism of museums and institutions that accepted sponsorship from Mobil while the corporation was profiting from its dealings with the South African police and military. 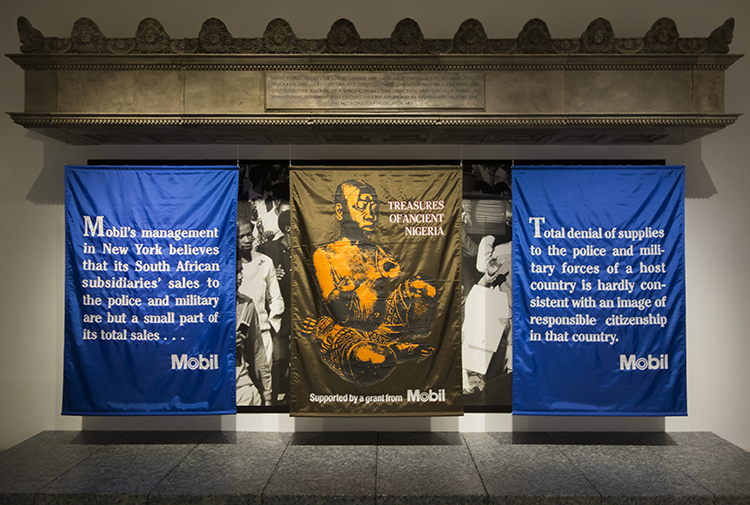 The installation comprises three parts: a black-and-white photomural, three banners and a cornice that resembles a fragment of the cornice at the front of the Metropolitan Museum of Art. The photomural, based on a colour slide by the photographer Allan Tannenbaum, depicts a funeral procession for black victims shot by the African police. Text on the cornice states why it is good to have sponsors in museums. The side banners – similar to those used at the Met – are excerpts from Mobil’s response in a shareholder meeting to its involvement in South Africa. The middle banner announces an art exhibition the company sponsored. Haacke is criticising the willingness of museums and other institutions to look the other way when accepting funding from corporations or individuals whose profit comes from illegal acts or wrongdoing. People who are not well informed would appreciate the art and the sponsor of the show without realising the sponsor’s actions behind the scenes. This is a subject that is much debated today. 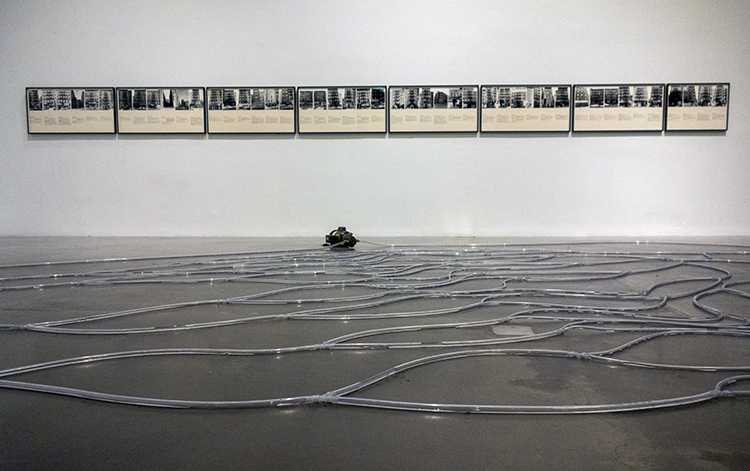 In 1971, the Guggenheim Museum cancelled an exhibition of Haacke’s six weeks before its opening, fearing it would be too controversial and cause a backlash from the families whose wrongdoings his work exposed. Two of those works, Circulation (1969) and Shapolsky et al Manhattan Real Estate Holdings, a Real-Time Social System (1971), are at the New Museum. Circulation is a simple installation of a clear tube in which air and water flow, its shape determined by what the artist wants to represent. His other work dealt with Shapolsky, a slumlord who acquired 145 properties in New York under the aliases of individuals or corporations. Photographs of the buildings are on display, along with a description of the location and the aliases used. The reason these two works go well together is because Circulation depicts the action of what goes on in the Shapolsky work; a roundabout system of corruption. Haacke is committed to exposing the underbelly of corporations and to give the public insight into what goes on, often leading him to challenge the very system he works for, the art industry. 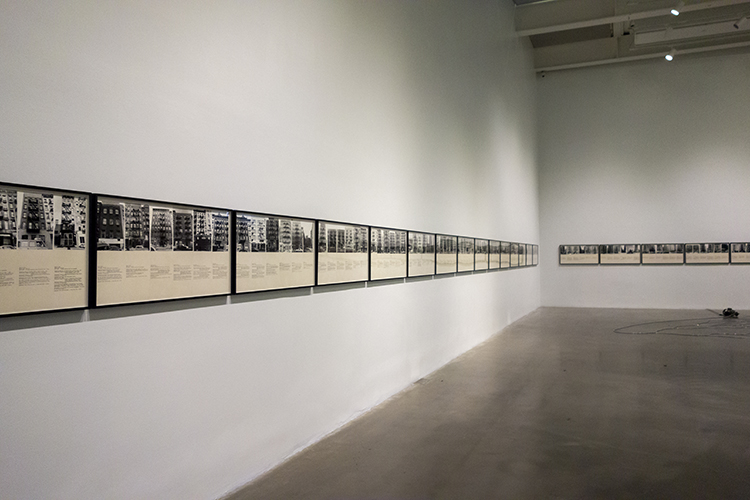 On the fifth floor the attention shifts from photographs to an analytical presentation. Opinion polls with graphs he created are posted along the walls. Haacke began his polls project in 1969 at the Howard Wise Gallery with the aforementioned Gallery-Goers’ Birthplace and Residence Profile. The following year he shifted to more politically based questions along with the public’s demographic. At the entrance to this floor is a poll he has created for The New Museum. Several interactive digital pads sit on a table for visitors to use, along with a smart TV that shows the percentage of answered questions. Haacke loves questioning the public about their presidents: in the poll from October 1972, a month before the election, he asked visitors to the John Weber Gallery which candidate they would vote for. Many chose the Democratic senator George McGovern over the incumbent Republican president, Richard Nixon. In his most current poll, Haacke asks visitors if they would prefer Donald Trump or Barack Obama. The display of polls gives clear examples of the thoughts people had at that point in time, and the data leaves a sense of the history we have lived.

The information and insights one gets from seeing Haacke’s works changes how one thinks about the art presented, as well as who presents it. Not only do we get an understanding of the powerful and their hold on the arts, we also learn that, although time has passed and some of Haacke’s art is more than 30 years old, its meaning still holds today. 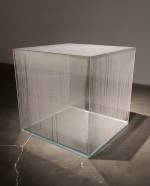 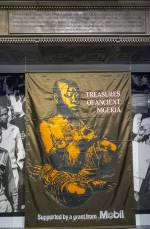 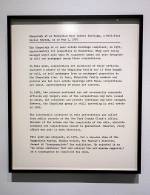