Here and Elsewhere, the latest exhibition at the New Museum in New York, presents the work of 45 contemporary artists of Arab origin. The show’s title is taken from the 1976 French film Ici et ailleurs by Jean-Luc Godard, Jean-Pierre Gorin and Anne-Marie Miéville.

Initially conceived as a pro-Palestinian documentary, Ici et ailleurs evolved into a reflection on the ethics of representation and, unsurprisingly, the artist as witness to political and historical events. The question of what is at stake in the act of representation characterises much of the art on view. While the curators are careful to avoid blanket statements about art from the Arab world, and work against the notion of a single Arab identity, much of the exhibition addresses topics that a western audience have come to expect from this part of the globe: war and crisis are recurring themes, and documentary and archive dominate. Special attention is given to the position of the artist in the face of historical events, but there is also a subtle hint of self-awareness of the position of the viewer in the show’s title. It is a nod to a film about a different culture made by a stranger attempting to make sense of how images structure ideologies.

Some of the best works directly engage with the importance of reception. In Fictionville (2011), Rokni Haerizadeh paints or draws over images isolated from the news to create scenes of grotesque fantasy. His gestures confront our passive reception of these events that we both feel so removed from, and accept as defining, the Middle East. Haerizadeh sees his work as implicating the viewer, who may not only be numb to these tragedies, but may actually take voyeuristic pleasure in the destructive and tragic spectacle.

Just before and throughout the Israeli siege of Beirut in 1982, the photographer Fouad Elkoury reported daily for international news agencies, providing images of the city’s decline during the conflict. To support their coverage, the media wanted images of carnage, combat and crisis, but, at the same time, Elkoury documented other daily realities: women sunbathing at a beach club or a family posing for a snapshot in front of the pockmarked and ravaged Place des Canons, or Martyrs’ Square. Elkoury called these photographs his VAT (“value added time”) pictures because he recognised that, often, the visual record we look for later to help recall a memory is different.

The continuation of memory is the subject of Lamia Joreige’s Objects of War (1999 –ongoing), a series of testimonials about the Lebanese war that take the form of video interviews and an accompanying installation. Joreige asks the people she interviews to talk about a single object that evokes the country’s civil war for them. Often these items are deeply personal: one man brings his dead father’s driving licence, while others chose things that may seem to be more utilitarian, such as a pack of batteries for a portable radio. As a series, the videos attempt to form a collective memory, but the subjectivity inherent in the multiple interviews simultaneously denies the possibility of ever creating a single or complete narrative. These objects are displayed in neat glass cases alongside the videos, forming an inventory that further confirms the fragmentary nature of memory.

The long history of sculpture as memorial is addressed in Mona Hatoum’s small, biscuit porcelain rendition of the iconic bronze monument in Beirut’s Martyrs’ Square. The original monument commemorates the Lebanese and Syrian nationalists who were executed on 6 May 1916 for resistance to Ottoman rule. Titled Witness (2009), Hatoum’s reproduction shows the monument riddled with marks from shells and bullet holes following the recent Lebanese civil war, which lasted from 1975 to 1990. In the late-19th and early-20th century, reproductions, often made in biscuit porcelain, of monuments and statues portraying important royal and political figures were popular and widely collected by patriotic citizens in many European countries. By evoking these historical traditions, Hatoum’s piece addresses the role of art in forming and confirming national identity, as a monument to a previous civil war comes to bear wounds of a later national conflict.

In The Mapping Journey Project (2008-11), Bouchra Khalili adopts an almost anthropological approach to study the movement of people from Arab countries across Europe. Like Joreige’s project, Mapping takes the form of a series of video interviews. Khalili met her subjects through chance encounters in European cities considered the arteries of trafficking and trade, such as Marseilles, Ramallah, Bari, Rome, Barcelona and Istanbul. While the stories recounted are all personal, each subject is given the same visual treatment, as Khalili documents their movements on a map with a permanent marker, reducing and fixing their stories into neatly registered data. We never see their faces, even though we hear their voices and know that they left home to get a better job, to escape war or discrimination, or to visit a loved one.

While so much of the exhibition is about the past, Wafa Hourani’s detailed architectural models present the Palestinian refugee camp Qalandia in 2087, 100 years after the first Palestinian intifada. Here, Hourani imagines utopian changes to the landscape: in 2019, the separation wall is covered in mirrors, and in 2085, the checkpoint is converted into a free-speech point. Across the six models, the numerous racing cars, aeroplanes and TV aerials prove that integration has taken over a former space of isolation.

In many ways, it is far too easy to pick apart the premise of the exhibition, which lumps together artists from several different cultures under the umbrella of the Arab world. But what the show succeeds in doing is not simply presenting the diversity of opinions and styles from this loosely defined group of artists – it manages to give us an exhibition of great depth, filled with an astonishing number of strong works. 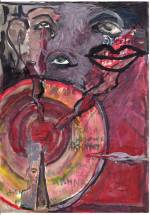 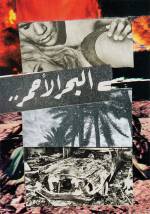