In 1954, a period characterised by the harsh context of Japan’s post-war reconstruction, the Japanese artist and teacher Yoshihara Jirō founded The Gutai Art Association, which has become a community space for free experimental artistic proposals. During the 18 years of the group’s lifetime, with more than 50 artists participating, Gutai made presentations around the world and became internationally recognised as one of the earliest art initiatives to involve the use of the body in performance in combination with technology and nature.

The history of this influential group can be seen at Gutai: Splendid Playground, Guggenheim Museum, New York, until 8 May 2013 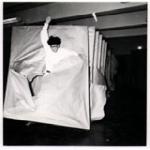