Grayson Perry’s current exhibition at Victoria Miro features his new series of six tapestries, The Vanity of Small Differences, which explores notions of taste through the lens of social class

Loosely inspired by William Hogarth’s A Rake’s Progress (1732–33), a group of eight paintings which tell the story of Tom Rakewell, a young man who gains and squanders two fortunes, eventually ending up in debtors prison and dying in a madhouse, The Vanity of Small Differences is a morality tale of the rise and demise of Tim Rakewell. Intriguingly the tapestries are inspired by the people, incidents and objects Perry encountered while researching the project on a journey through segments of social class via visits to Sunderland, Tunbridge Wells and The Cotswolds – a process documented in a three-part television series, All in the Best Possible Taste, for Channel 4.

As is evident from the multiple comments in the visitor’s book, most have been introduced to Perry’s latest works through the Channel 4 series. It is quite easy to be cynical about these programmes and dismiss them as an opportunistic PR stunt. But they are much more than that. While the television series ostensibly reveals the research process behind Perry’s tapestries, it also draws awareness to the artist’s acute sensibility to both the intellectual and emotional baggage different forms of media accrue over time. This interpretation is often used to describe Perry’s use of craft media, such as ceramics, but it is equally pertinent here. Starting from British television documentaries such as Seven Up! (1964) and The Family (1974), it is possible to begin to trace a tradition of realism and a pointed interest in observing class that has continued to the present in British broadcasting. 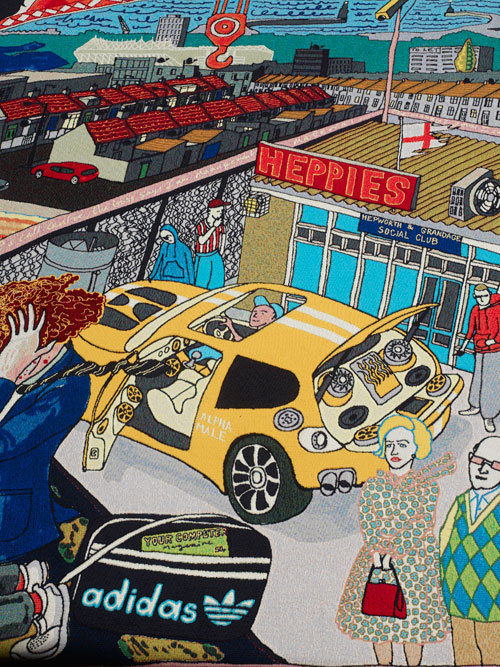 Below: Grayson Perry. The Agony in the Car Park, 2012 (detail). Courtesy the Artist and Victoria Miro Gallery, London.

In the series The Vanity of Small Differences, two tapestries are devoted to each of the three social classes: working, middle and upper. As mentioned before, this work is loosely based on Hogarth’s A Rake’s Progress and Perry plays homage to the master by including in each tapestry a small dog reminiscent of Hogarth’s beloved pub, Trump. Each work also includes snatches of text in the voice of a participant in the scene illustrated, thus tying the pieces intimately to the people whom Perry met during his “journey through the social classes”.

The first installment of Perry’s television series and its companion tapestries have been criticised for being naïve and lacking the cold-eyed detachment of his mentor Hogarth. Though it is evident that the man who himself worked his way up from the working class finds a soft-spot for the people he met in Sunderland, his works should not be dismissed so easily. Much of the pathos evoked in these scenes derive from the use of religious iconography. In The Adoration of the Cage Fighters, a young single mother in blue holding her little boy, our protagonist Tim, becomes the Virgin Mary, while two tattoo-covered cage fighters kneel before her as the Magi, and the role of the divine is depicted as an elderly woman who watches over and cares for the community. Each of the six tapestries, to a greater or lesser extent, pays homage to a religious work. In The Agony in the Car Park, Perry borrows from Matthias Grünewald’s Isenheim Altarpiece with the local club singer crucified on the abandoned cranes of failed industry. 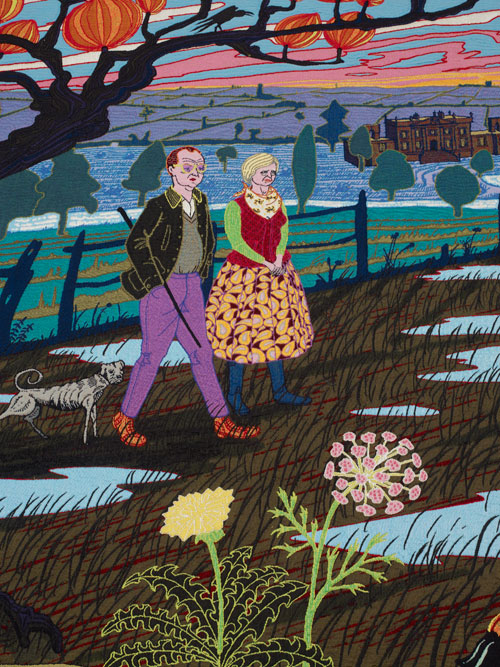 Perry is certainly aware of his own position in relation to his work and openly admits that some aspects of the scenes in the pieces are autobiographical – such as the abandoned little boy hiding behind the banister in the left-hand corner of the first tapestry. Beyond the personal, Perry also manages to tap into our contemporary social consciousness, as is evident in the second tapestry where writing in the waves spell out socio-political clichés about the working class.

Having gone to university to study computer science, our protagonist Tim, in the requisite wide-rimmed geek glass and large headphones clutching a tiny laptop and smartphone, has been expelled from Eden. Standing in the centre of the third tapestry with his university girlfriend, the pair are caught between what Perry identifies as the two different sections of the middle class: those that have only just risen from the working class who are obsessed with labels, model homes, driving Range Rovers, playing golf and manicuring their lawn versus those who have inherited the torch of the middle-class, who live in well considered eccentricity and domestic bliss, hosting dinner parties and rustling through local charity shops for vintage finds.

In the fourth tapestry, the scene is the interior of a small kitchen with the foreground given over to a still-life of the objects coveted by the middle-class, from their iPad and Guardian newspaper, to a charity shop vase and organic vegetables, and even a pot by Grayson Perry. In both the television series and the two tapestries devoted to the middle class, it is obvious that Perry feels almost uncomfortable commenting on this section of society, as it is where he identifies his own social position. In the end, this is reconciled as one of the overriding characteristics of the middle-class, a sense of guilt and anxiety.

Moving into the upper class, Perry mixes several visual references into the composition of the fifth tapestry, from Thomas Gainsborough’s Mr and Mrs Andrews to the myth of Diana and Actaeon. While protesters camping in front of Tim’s mansion declaim his tax evasion, the half-man/half-stag being eaten by dogs in the foreground of the canvas is wearing a tattered and patched tweed coat, signalling the deterioration of the upper echelons of society, a “fall” also comically pointed to by the subtitle of the work “An endangered species brought down”. But the reference to Diana and Actaeon surely also refers to Britain’s recent purchase from a private collector of Titian’s painting of the subject for £50 million.

The series ends with #Lamentation in which Tim, now a famous and wealthy computer developer, dies after crashing his red Ferrari while joyriding with his new, much younger, wife. Much like Renaissance depictions of the Lamentation, every object that lies around the dying and exposed man is endowed with meaning: the Hello! magazine is a symbol of our contemporary obsession with celebrity, while a limited edition Louis Vuitton bag points to overemphasis on labels and ostentation portrayal of wealth. If Tim is portrayed in the role of Christ, who dies for our materialist sins (“he died in the gutter”), then the nurse now takes on the role of his mother Mary, one who nurtures and then carries the sorrow, while Tim’s young, blonde wife, who stands in the centre of the tapestry, her tarty pink dress stained with blood, is the Mary Magdalene. The title of this final episode also neatly ties the traditional iconography of the Lamentation to our present with a reference to changes in contemporary communication following the rise of digital media by means of the hash-tag symbol.

Perry’s ability to engage with contemporary culture in a way that is unwaveringly honest and direct makes his work incredibly accessible. Ironically the fact that the works are so “accessible” is both a blessing and curse. While access is a key aim in museums, the contemporary art world often tends to favour works that are more “difficult” or subtle. But this is a prejudice that surely should be dropped. Perry’s work is both direct and multifaceted. Here the tapestries open up upon closer inspection to reveal layers of meaning and references to satisfy any art world elitist. 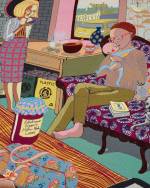