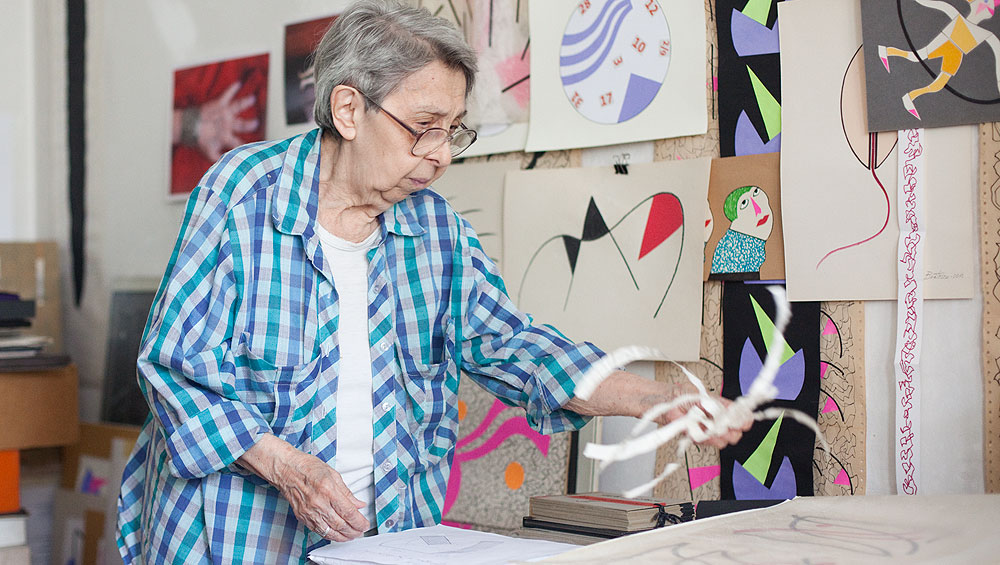 The Romanian-born visual artist and graphic designer Geta Brătescu (b1926, Ploieşti) lives in Bucharest. Having worked in the city for a long time under the constraints of the Soviet occupation and then Nicolae Ceaușescu’s repressive, totalitarian regime, Brătescu has devoted her life to constructing within her studio space – a place that is free of economic or political influence – a conceptual, self-reflexive lexicon. Her interest in language developed through her literary studies at the University of Bucharest under the tutorship of the critic, historian and novelist George Călinescu and the author Tudor Vianu. She later graduated from the Academy of Fine Arts, where she was taught by the painter Camil Ressu. After finishing her studies, she became the artistic director of the Romanian cultural magazine Secolul 20 (now entitled Secolul 21), working there for almost 20 years. During this period, Brătescu started to collaborate with national and international artists. She published her own work in a two-dimensional format, experimenting with volume, space and the challenge of transforming her poetic view from studio productions to the written page.

Camden Arts Centre’s exhibition frames Brătescu’s artistic career in the context of the studio. The title, The Studio: A Tireless, Ongoing Space, foregrounds the recurrent processes in the artist’s studio that deal with the issue of escape from conventions and the mundane, deconstructions and reconstructions of the self and translations. Her experimentations are shown in the exhibition through a wide range of media – drawing, collage, video, sculpture and photography – all representative of the ambiguous nature of Brătescu, who is constantly torn by the tension between her social and private role. Her works demonstrate her self-referential explorations, using her body as text, and the act of drawing as performative writing. She has said: “When I draw, I know that I actually write using letters invented by me. By drawing, I de-scribe my imaginary universe.”1

Indeed, Brătescu’s practice evolves within the space of her studio where her daily dialectic of cognition and labour do and undo in a perpetual research, like Odysseus’s wife, Penelope, who constantly wove and unpicked her work. The studio thus shifts from isolated confinement to a positive space of true expression. Throughout the exhibition, the image of Brătescu is manifold, bearing witness to childhood memories, dreams and symbolic figures. She was inspired by characters from Greek mythologies, such as Medea and Baucis, and by female characters from the German legend of Faust. She turned these legendary personae into symbolism that goes beyond literary illustrations, and they form her most important series of textile works, made during the 1980s, which the artist describes as “interpretations”. Her Medea’s 10 Hypostases is a collage of drawing, painting and sewing, and her Mutter Courage sketches from 1965 engage with icons of femininity.

Brătescu’s introduction of gender-related issues to her artwork is subtle and ironic yet powerful and unresolved. Aesthetic standards are pushed to the extent of theatricality, with Brătescu playing the contradictory figure of the jester. In abstract collages, such as Vestiges from 1982, the artist assembles used materials, including cigarette foil, papers and scraps of her mother’s old clothes, in an attempt to aestheticise Romanian arte povera and show a coherence between popular and cultivated art.

As well as using the symbolic female act of weaving, her psychological investigations employ mirrors, foregrounding prosaic everyday female actions. She uses masks and makeup with fragmented photographs of her facial features in a superimposed juxtaposition that mimics cultural standards and unspoken expectations. Nonetheless, it seems to me that the artist’s acute awareness behind the Self-Portrait in the Mirror series can be read rather as mocking the Freudian-Lancan “contemplative self-discovery” stage, subsequently amplifying Brătescu’s clear consciousness of herself, of being a women, and of her erotic power. Looking in the mirror, her constructed image reflects back to us with all the fierceness that signals a shift from the role of the bearer to the one of the maker.

Startlingly, the artist refuses to identify with feminism ideology, and clarifies: “Feminism means a uniform – and it is part of political manoeuvres [where] women become object. Femininity and not feminism. Femininity operates using self-knowledge and distancing […] Femininity is a specific energy – it is an aura, a light that is a gift and which entices the world through diversity.”2 I suggest that a way of locating Brătescu’s problematic refusal to identify with feminism might be provided by Anne-Marie Sauzeau-Boetti’s notion of the “negative capability”.3 Advocating the importance of coining a female vocabulary connected with the body (biologically, physically and sexually), Sauzeau-Boetti claims that women can achieve freedom from cultural oppression and gain a position of distinction only through self-oppression and self-negation.

One clear example of this theory can be found in Brătescu’s early photographic works Towards White (1975) and The Smile (1978). By means of photography, she documents both her endeavours in trying to disappear within the image, questioning cultural opposites and social contradictions, black and white, real and fictional, material and abstract. The artist becomes the work of art, the sculpture: her body is the text. “Living peacefully with your works is difficult,” she says. “Thus, I came to the idea of an action, Towards White, and later on this idea acquired new interpretations, direct ones and labyrinthine.”4 Brătescu, by negating her body to the viewer, reaffirms its presence and its existence within a system in constant mutation, concurrently playing with the spatio-temporal context of the studio as a limbo, a laboratory of research detached from externally imposed paradigms.

A selection of five videos traces Brătescu’s experimentation with film, where the studio as the space for production is pushed even further. In The Studio (1978), a short film made in collaboration with conceptual artist Ion Grigorescu, Brătescu tackles notions of self-representation and self-perception by drawing a square line using her body as the measuring stick. During the process, she defines her own private realm within the closed space of her studio that, via the eye of the camera, has acquired public visibility generating a one-way connection with the outside world that allows the audience to gaze in only through the camera’s lens.

The negative space of the studio overrides the questions of objectification, autarchy and competitiveness inherent in a patriarchal art system, bringing true affirmative innovations assessable through the criteria of the avant-garde. Showcasing language in the “negative”, intended as the language of the other, allows women to undertake a process of differentiation. Through postmodern symbolic associations, Brătescu questions the modern ideal of autonomy of the artwork and the artist; her video The Hands (1977), subtitled For the eye, the hand of my body reconstitutes my portrait, plays with hand gestures. In an interview in 2010 with art critic Adrian Guta, she said: “The hand is very expressive and very personal. When I make acquaintance with somebody I always look at their hands.”5

During the past two decades, her productions have evolved into more minimalistic representations. Continuing her unique conceptual investigations and poetic vision, the 2010 series Jeu de Formes strips bare the signified colliding and juxtaposing of colourful geometrical shapes. She told Guta in 2010: “The Game of Form is, in fact, a game of hand. Meaning that I have the paper, that it represents the space. It is about the hands playing in that space, like in some sort of dance.”6 These reductions of language evidence an artistic maturity and the artist’s acquired ability to convey more with less, still continuing to produce powerful discourses with multiple readings that comment on contemporaneous verbal and visual exchanges.

Her experimentations on the nature of poetics and storytelling from auto-conscious introspections cross with surrealistic mechanism of automatic writing. Through a series of nine drawings, Nouă desene cu ochii închiși (2006), which Brătescu did while keeping her eyes closed, she depicts a twofold perception of the world: her hands as tools that speak for her mind and thus trace lines that reveal her inner thoughts. This subconscious access opens the mind towards new imaginative methods, expanding on alternative perspectives that merge the private and public spheres. Furthermore, this personal threshold, enclosed within the studio walls, allows these drawings to take on perhaps the more historical task of evoking the purity, the genius of her work, at the same time as exposing its most intimate, inner character.

Since her decision not to flee Romania during the Soviet occupation and the subsequent Ceaușescu dictatorship, Brătescu continues to develop new vocabulary that consistently combines her radical visions and technological innovations. This language in the “negative” projected from her studio creations construct an alternative art history that is quintessentially feminine. As she has explained: “My life …is the experience of a woman who left the comfortable bourgeois home of her parents in her early youth and made her way in life by herself, with good and bad. And despite all the ups and downs, something remains constant: the artist vocation and then the awareness of it. It is this awareness of being an artist that removes the tyranny of prejudices.”7 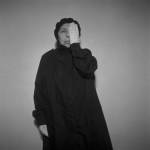 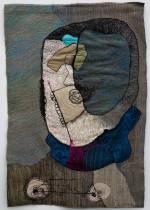 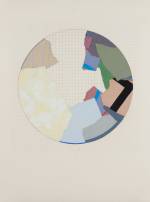 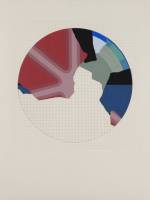 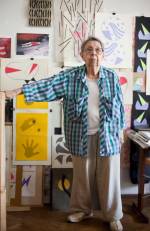 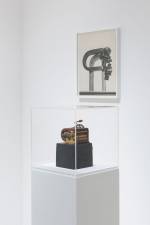 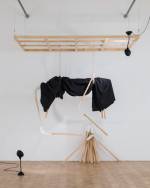