The enigma of the German painter Gerhard Richter (b.1932) is finally explored through Robert Storr’s grand exhibition this spring in New York

Richter as a painter can now be taken to epitomise the transformation of painting in the second half of the 20th century. His diverse, brilliantly accomplished technical range of development over four decades should not be allowed to detract from his intellectual achievement in bringing the recovery of painting to a pitch of justifiable validity at the beginning of the 21st century. The l88 paintings on show at the Museum of Modern Art finally reveal the breadth of experimentation pursued by Richter over the decades; his struggle to relate painting meaningfully to the exponential growth of modern society and culture, while all the time this effected, enveloped and ultimately breached traditional ideas about painting.

It is curious to note, writing back in London, the general paucity in the British art world of coverage on this European master of the late 20th century. In contrast, this journal praised Richter early on, in l965, and reviewed his work again in September l972 following that summer’s Biennale while still perplexing the established critics. The article presciently acknowledged how Richter had consolidated his international reputation as a painter. For a decade Richter had striven to resolve the question of the nature of reality, mistrusting all ideologies, aware now of the challenging potential of new media and materials exploited by others such as Yves Klein and also Manzoni. But Richter had already drawn upon his traditional painterly skill to resolve anew the question of the nature of reality, mistrusting ready-made solutions or the appropriations of Pop art. He found he could, as a painter must, express that concrete reality in terms of light itself. As early as l962 he had been experimenting with meticulous painted renderings of fleeting photograhic images and blurred copies of snapshots. But it was not until l991, at the Tate Gallery, that Sean Rainbird had organised his retrospective there, preceded by Richter’s ‘Mirrors’ shown at the Anthony d’Offay Gallery. This was after Richter had participated in the 1982 Berlin ‘Zeitgeist’ exhibition, in the company of Baselitz, Beuys, Clemente, Gilbert and George, Immendorf, Kiefer, Morley, Merz, Penck, Polk and Stella. Richter had been celebrated for two decades before London conceded his importance. Richter was about nothing if not the spirit of the time.

Born in Dresden, Richter survived the Nazi period and the Dresden firestorm (visible from where the family had been accommodated some 100km away). In the prevalent German regime which followed he used the sound traditional art education available to become a poster artist. But he gravitated from Dresden to Dusseldorf as strictures were lessened, via a spell as a visiting lecturer at the Hochschule für Bildende Kunst in Hamburg, and as an art teacher at Dusseldorf high school before, in l971, joining Josef Beuys as a professor at the Dusseldorf Academy. In l961, just after Andy Warhol had embarked on his Popey canvases and Dick Tracy, Richter had a stroke of good luck. Returning from Moscow his train stopped unexpectedly in west Berlin. Quick-wittedly Richter dropped off his luggage there, then was driven back there from Dresden with his wife by a friend, crossing on the subway to west Berlin to retrieve it and gain freedom.

In l966 Richter wrote, ‘I consider many photographs better than Cezanne’. A typically unpremeditated painting from such a photograph is ‘Mustang squadron’ (l964), which bears no message, carries in its content no immediately apparent significance, other than that Richter, three years free, could paint American aircraft in British markings, ignoring the still unhealed social scars of Nazi wartime conflict so apparent in west German society of the early l960s. Here, Richter asserts the legitimacy of the artist copying the swooping fighters against a verdant green pattern of fields. There are also similar Richter paintings of U.S. wartime, and, later, NATO bombers, as well as paintings of wartime German Stuka divebombers. Richter is stating his freedom, almost to disengage from the political climate engendering such subjects, in pursuit of an independent realism.

‘Townscape Madrid’ (l968) is likewise one of a group of seemingly random cityscapes where Richter addresses architectural or urban patterns detachedly, yet — with a semblance of Manet — with a light historical referencing: in a deadpan, flatly-shaded complexity, the postcard-like homogeneity of the over-view of Madrid street intersections still conveys some nondescript intensity of human activity, yet the scale chosen is too small to show people. Here, Richter’s ‘grisaille’ technique as a tool for blurring imagery is only evident in a generalised sense. But soon, as a part of his apparatus for maintaining some balance between painted objective detachment and subjective disengagement he increasingly deploys this technique. So by the time of the l972 Venice Biennale, Dieter Honisch in the catalogue could rightly claim:

‘The role of the picture as a medium for personal communication was denied and painting was now led towards the registration of reality. Richter recognised early that painting during this phase of objectivity could be justified not by personal inspiration but only by reality itself. Thus he arrived at photography: the absolute and two-dimensional representation of reality’.

Here, Richter’s 48 portraits, ranging from Jose Ortega y Gasset through Paul Valery, Kafka, Graham Greene, to Oscar Wilde and Andre Gide served both to perplex and surprise critics who were already claiming that painting was dead. Instead, they had experienced for the first time the deconstruction of the art of painting by Richter, if only to reconstruct the medium with greater validity and meaning in terms of their contemporary reality. Heiner Stachelhaus, writing in Studio International at that time, commented on how amply Richter had succeeded:

‘because he recognised that the fundamentally realistic qualities of photography could be used as the basis for art, no matter how banal the photographs to be copied were…the photograph and the artistic manipulation of it was something decidedly different from the creation of a painting in the traditional way, made according to the autonomous laws of painting.’

Richter had in fact shocked the Biennale traditionalists, not so much by the superlativeness of his technical exposition, although that was formidable, as by finding, in this way, a new but freer objectivity than the general cult of personal inspiration allowed at that time. Photography as source material thus enabled Richter to achieve anonymity and objectivity together.

‘I do not blur any pictures to make a representation seem more artistic through lack of clarity as to give my style an individual note.’ Richter had said at the time, ‘I rather equalise, neutralise what is depicted, attempt to retain the anonymous gloss of the photograph, to replace the craftsmanly-artistic with the technical.’ Increasingly, Richter has succeeded in dismissing formal positioning as such. He deliberately diffuses the line that separates art from life. Yet he is by the same token cunning enough not to try to erase all doubt, even with photographs about the nature of that reality. Richter pursues always that which cannot be fully explained. In the widening versatility of his work since that Venice display, Richter showed a growing versatility that confounded the majority of critics, yet even those who were amazed at the originality of Richter's approach could not possibly have conceived of what was still to come. 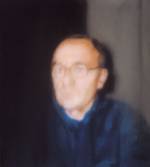