The National Gallery’s autumn blockbuster posits the troublesome post-impressionist firebrand as a revolutionary painter of portraits, concerned with himself even as he painted others 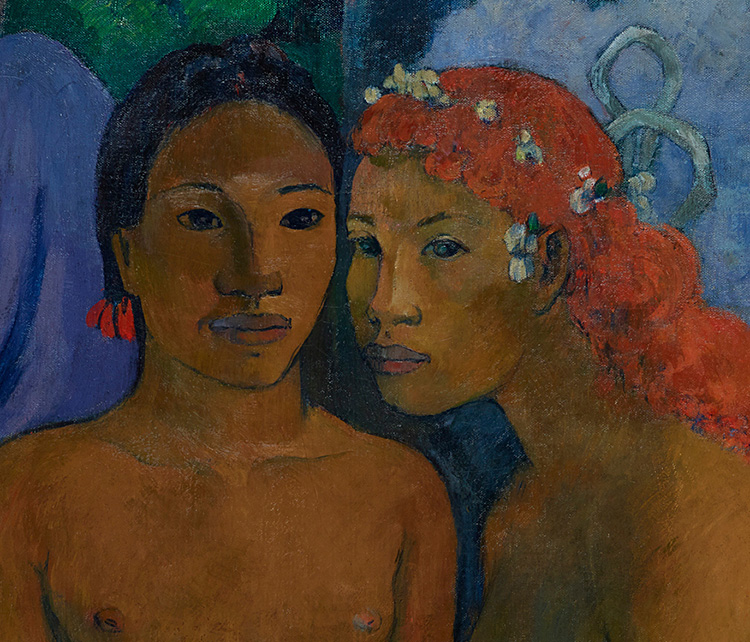 It takes a very particular sort of artist to envisage himself as both Jesus and a jug. Paul Gauguin (1848-1903) did so in the space of a single year. Christ in the Garden of Olives (1889) has his unmistakable self, cowed in despair and abjection, while two black-robed soldiers traverse a hazy, dreamlike landscape in pursuit of their target. The painter is a victim, wrongly persecuted for his visionary practice; he is also on the verge of being subjected to the terra incognita of crucifixion, the afterlife and resurrection. The Gauguin that appears in his Anthropomorphic Pot (1889) in enamelled sandstone, by contrast, is a squatting homunculus chewing on his own thumb. 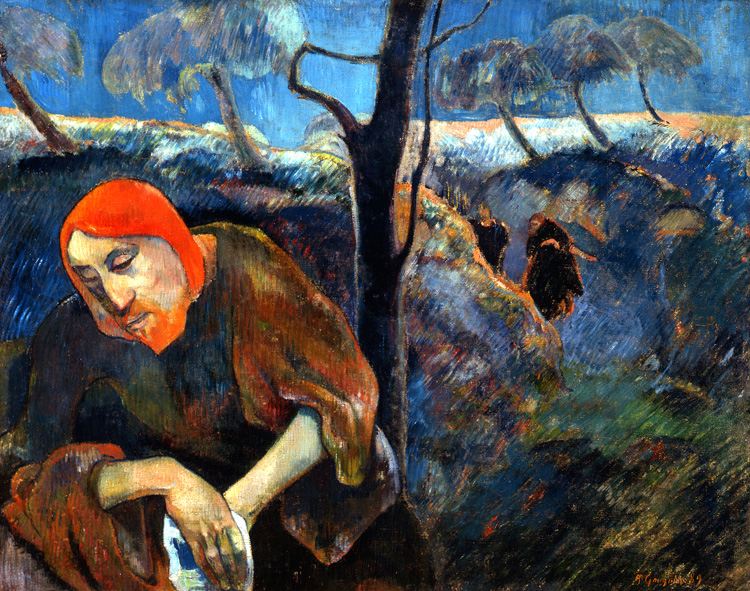 Gauguin Portraits, the National Gallery’s autumn blockbuster, makes a persuasive case for portraiture as Gauguin’s most exploratory medium. Beginning with a raft of his obsessive self-portraits – we see him attentive before his easel (1885), smug before his symbolist piece The Yellow Christ (1890-91), and in profile emphasising his aquiline nose and piercing eyes (1896) – it cuts a brisk path through his convoluted biography, from France to Tahiti and back again, until his final years on the remote island of Hiva Oa. Almost throughout, it casts Gauguin as an artist taken to posing and role-play, even masquerade – at least until the very end when, suffering from syphilis, liver disease, heart disease, malaria, severe eczema and rotting teeth, he painted himself simply in a mirror (1903), weary and worn-out, wearing spectacles, sadly staring death in the eye.

It now goes without saying that these years in Polynesia are litanies of imperialistic privilege. Gauguin had a succession of marriages to underage native women, whom he often depicted with leering male desire, turning them into passive vessels awaiting the fantasies of their male beholders. The string of miraculous paintings usually regarded as his artistic peaks are also among the most repellent in art history, transforming the islands of French Polynesia into Edenic paradises of untrammelled pleasure, open for the white man’s taking. 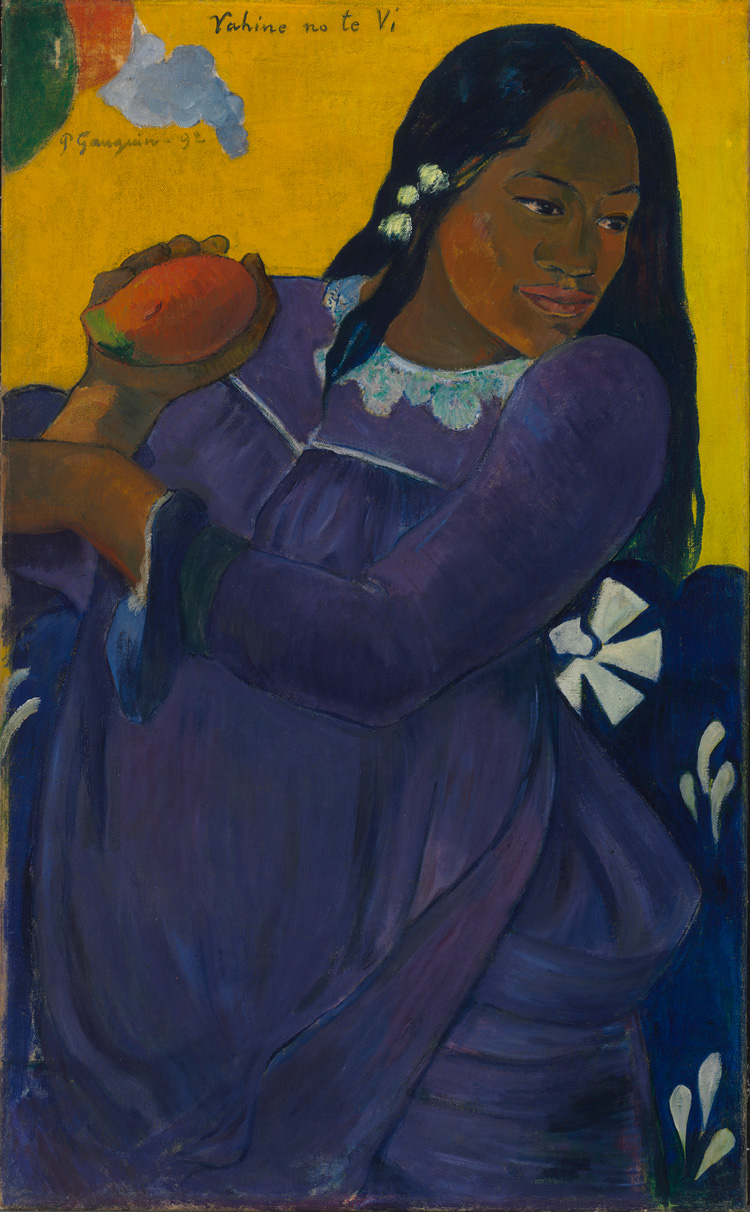 Gauguin Portraits doesn’t quite sidestep these issues, but it does pull focus. When, midway through the exhibition, we do arrive in Tahiti, we encounter none of his highly eroticised nudes. Instead, we have Woman With a Mango (1892), where his 13-year-old wife Teha’amana, clothed in a swishing purple dress, wields a mango with an uncharacteristic dynamism. She has a jolt of purpose and autonomy absent in his more usual, and more troubling, characterisation of her as almost servile.

More than half the pieces on display predate this first voyage, and chart his journey from observational impressionism to the non-representational assemblages, luscious washes of colour and allegorical arrangements of his mature work. The constant throughout is his tendency to saturate his portraits with his own thoughts and intentions, in a seeming affront to portraiture’s conventional aim of representing their subject. Sometimes, he turns his ostensible subjects into just a part of the overall composition. A small oil painting from 1881, a rare piece from his period as a prosperous Paris stockbroker, places his daughter Aline behind oversized fruit, a stolid, scrunched-up clump compared with the vivid balls before her. 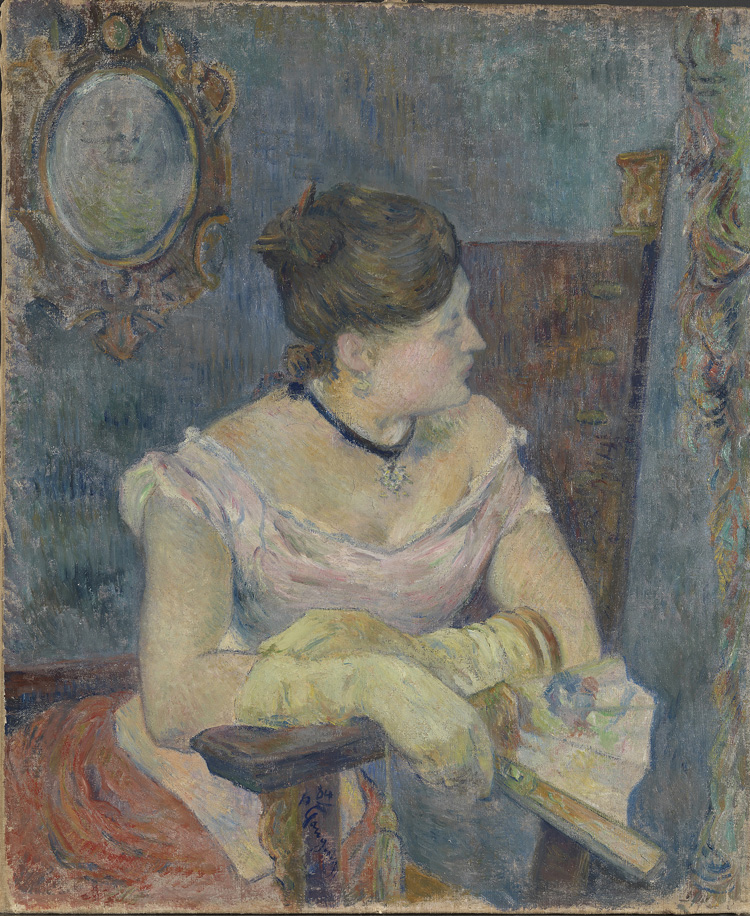 He was prone to letting his relationship with his subjects spill into his rendition. In 1884, he painted his wife Mette-Sophie Gad within their bourgeois home, her gloved hand grasping a fan. While conventional in form, Gauguin’s dour palette imparts a stultifying bitterness. Mette turns away, as if unwilling to meet his gaze. They were separated two years later, as Gauguin left her and most of their children behind in Copenhagen to become a professional artist. 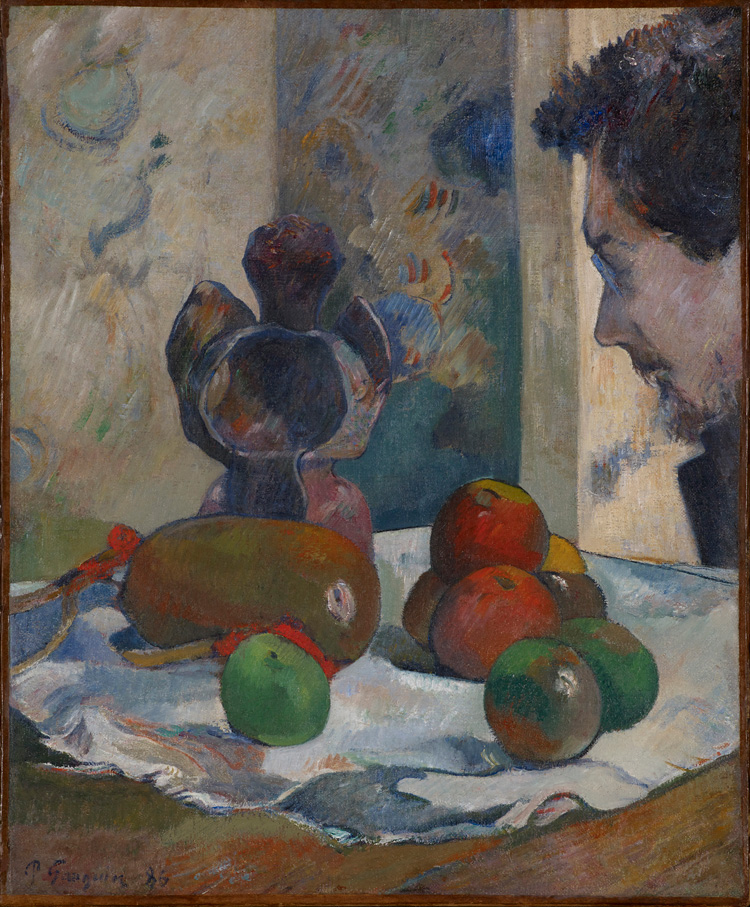 Similar whims were applied to his artistic contemporaries. Despite his pugilistic manner, Gauguin amassed a string of disciples, many of whom predeceased him. Still Life With Profile of Laval (1886) sees Gauguin squeeze his devotee Charles Laval in the top-right corner of the canvas, making him secondary to the succulent fruit in the painting’s centre. Laval appears to be studying an oddly shaped ceramic that Gauguin had crafted, placing him firmly on a secondary level of importance (or even tertiary: some art historians consider the fruit a homage to Cézanne). A few years later, Gauguin carved the Dutch artist Meijer de Haan in a block of oak (1889), turning him into something between a totem and a medieval choir-stall carving. Contemporaneous drawings of De Haan are almost caricatures, metamorphosing him into a furrow-browed intellectual. 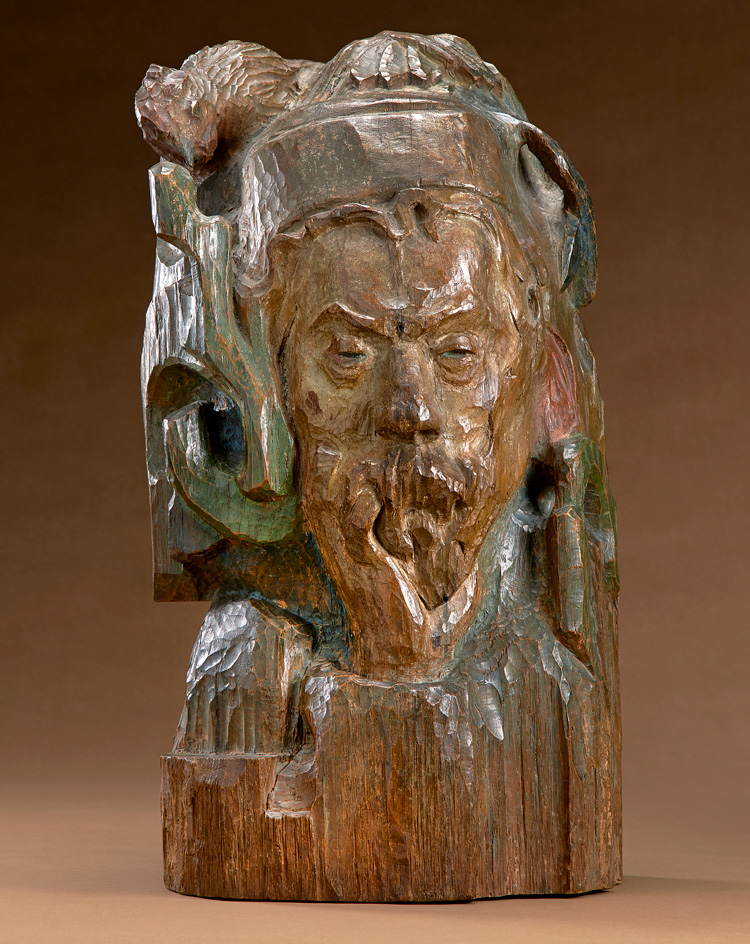 The only artist who seemed to escape Gauguin’s games was Vincent van Gogh. Their creatively fecund, but emotionally torrid stay in Arles in the winter of 1888, which ended after Van Gogh threatened Gauguin with a razor blade, then cut off his own ear, saw them diverge towards the very different styles of their later practice. If this section doesn’t offer much in the way of dialogue between the two – there are no works by Van Gogh, nor is there Gauguin’s earnest portrait of his comparison as The Painter of Sunflowers (1888) – it does underscore how different the pair’s work was. Gauguin’s Portrait of Madame Roulin (1888), wife of the local postman, is rosy-cheeked and contented, in contrast to Van Gogh’s more introspective recording of the same scene. The dashed brushstrokes of impressionism, which Van Gogh was to take to luminous extremes, had already given way to a woodcut-esque flatness in Gauguin’s hand. 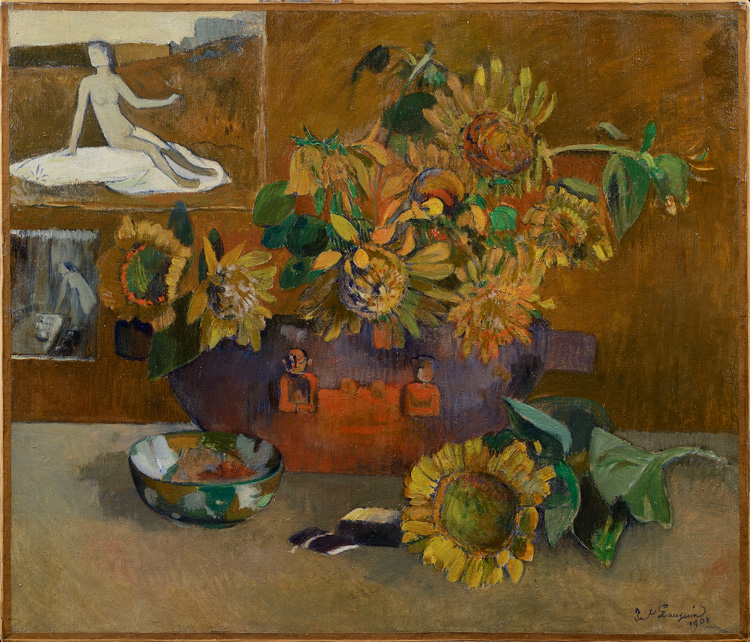 Van Gogh died in 1890, but he continued to haunt Gauguin. During his second Tahiti excursion, Gauguin had sunflower seeds sent over from Paris so that he could grow the flowers, which had by then become indelibly associated with the tragic Dutchman. In Still Life with Hope (1901), he placed a vase of them between works by Degas and Purvis de Chavannes that they both admired: a tribute to his friend’s work and a summoning of his spirit, but also to their shared interests. De Haan would also return, but in a rather different form. Bouquet of Flowers (1901-2) imagines him as a gargoyle-like grotesque, creeping behind the ambrosian flowers of Polynesia, as if a metonym for the imperialistic Europe threatening the island.

There is great irony in Gauguin’s apparent discomfort with imperialism. It might relate to the roving nature of his life. Though a Frenchman heading to the republic’s colonies, he had a more complicated relationship to the colonial world than the familiar France-to-Polynesia narrative suggests. He spent part of his childhood in independent Peru, learning Spanish as his first language. Before Tahiti, he had visited India, Panama and Martinique. He liked to call himself “the savage from Peru,” a proud identification but one that uses the language of the coloniser. He despaired against the Frenchification of Polynesia while being party to it. 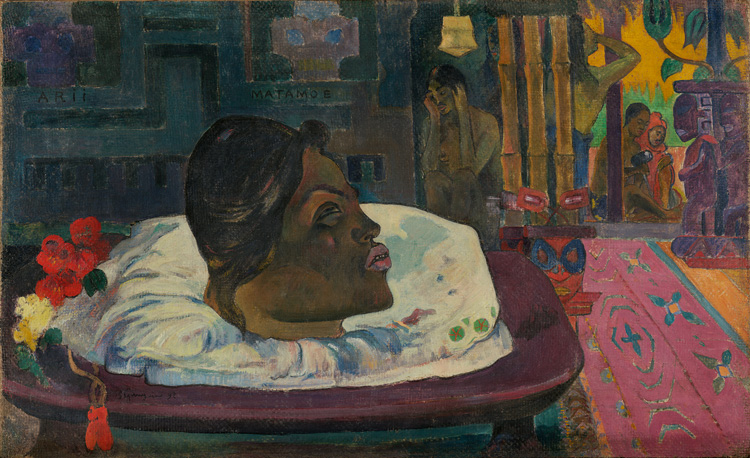 It was perhaps as a corollary of this that Gauguin developed a synthesising strain, mixing elements from across the world in curious juxtapositions. The Royal End (1892) depicts the severed head of a Tahitian king. Although the guillotine was used in Tahiti, there was no ritual display of heads. Was Gauguin trying to bridge a divide between coloniser and colony, or was he simply seeking to find an angle that would appeal to the French art market? A self-portrait from 1893-4 sees his face broken down into sculptural segments, like those of a Polynesian idol. In the background hangs The Spirit of the Dead Watching, his exploitative 1892 nude of Teha’amana, turning the portrait into something of an advertisement for his colonial adventures. Young Christian Girl (1894) depicts a Breton woman with elongated, sculpture-like hands, wearing a Tahitian missionary dress. 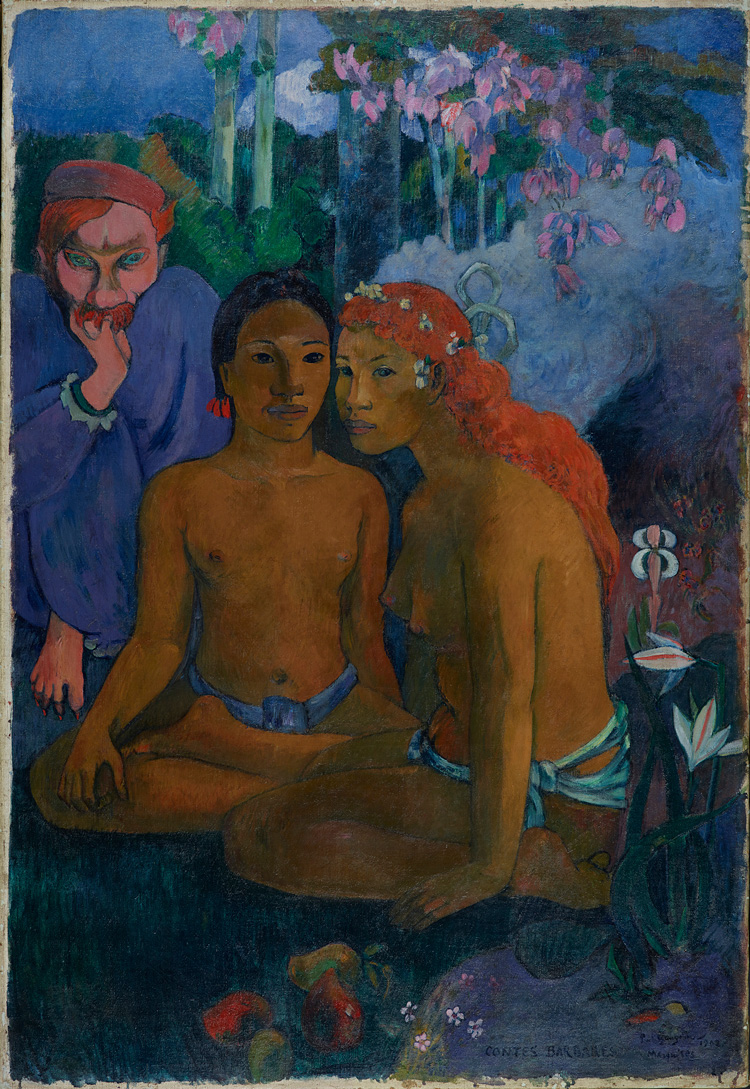 This amalgamating instinct reaches a crescendo with the extraordinary Barbarian Tales (1902). Set in a bewitching nocturnal grove, it sees two nudes sit together. One is a Polynesian woman, the other an androgynous Buddha-like figure. Behind them, De Haan takes on the guise of a claw-footed devil, fulminating in a missionary dress. Does this triad represent different religious traditions, and their arrangement the evil designs of the west on their colonised? Or is it a marshalling of figures from his past and present, whose significance is known only to Gauguin? As with almost all his portraits of others, the artist remains a palpable presence, glowering behind every stroke of his brush, imposing his will on the painted world. In this, Gauguin’s portraits amount to little less than a wholesale remaking of the genre, and the clearest bridge between impressionism and the modernism to follow. Watching this shift take shape retains the power to exhilarate. 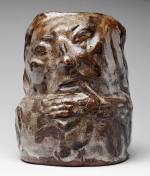 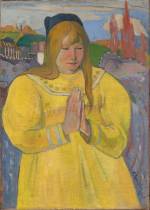 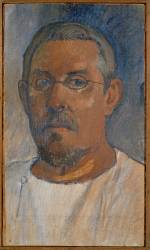