GR Iranna: ‘I treat all forms that I create with equal compassion – whether it is a tree or a carpet’

GR Iranna: ‘I treat all forms that I create with equal compassion – whether it is a tree or a carpet’

As he prepares for a solo exhibition at the National Gallery of Modern Art in Bangalore, the artist explains that, despite a move towards more abstract works, the human element in his painting and sculptures is still implicit

The verdant Asian Games Village in South Delhi is home to many artists’ studios, its leafy haven providing the creative mind with the peace and quiet that is often a prerequisite for concentrated art-making. For GR Iranna (b1970) it is the perfect location, since most of his current work requires digging inwards rather than communicating outwards. This introspection often leads to an expression of the spiritual that imbues his work, which appears to be moving toward a more abstract, metaphorical phase.

Hailing from the small town of Sindgi in Karnataka, Iranna has always been aware of the environment and had compassion for the nameless worker, the indentured farmer and the beasts of burden, all of which have had to endure the tyranny of those in power and the perpetrators of senseless violence. Even in an age of cold cynicism and endless blame-games, Iranna believes in the “innocence of the victims” of this violence and the basic integrity of honest hardworking people.

Currently working towards a solo exhibition at the National Gallery of Modern Art (NGMA) in Bangalore, hosted by his primary gallery, Guild Art Gallery in Mumbai and curated by critic-curator Ranjit Hoskote, Iranna shares a sneak preview of his large canvases and his journey to this point in his oeuvre. We sit close to the paint-streaked working sheets that coat the floor of his studio as his assistants bring out each canvas and Iranna tells the story behind it.

Georgina Maddox: Are you excited about exhibiting at the Bangalore NGMA?

GR Iranna: Yes, it is a vast space, probably the biggest I have shown in – 20 metres in width and 21 metres in length – and there are two floors of unhindered gallery space. It’s perfect for a mid-career show.

GM: Your current body of work appears to be moving away from the figuration that dominated your earlier works, becoming notional and metaphoric. Tell us about this shift.

GRI: My works are moving away from figuration and more towards abstraction, or you could say more towards patterns and erasures of those patterns, through elements such as slashes, bullet marks, heightened textures and simplified forms. The human presence is implicit in all these paintings, since my work can never be divorced from the human condition. However, I treat all forms that I create with an equal amount of compassion – whether it is a tree or a carpet. For the past few years now, I have been moving towards subtler metaphors that capture the essence and emotion of forms.

GM: To take a few steps back, how did you arrive at these preferred metaphors?

GRI: The tree has been integral to my work as an artist. I have always felt that it embodies life and, because of its silence, its stillness and meditative quality, I have always found it mysterious and spiritual. The cut tree, with its veins and its sprawled branches, is one such metaphor that recurs in my work. In this [he indicates a large canvas with a muted palette), an 18-foot, triptych, canvas, I have alluded to the connection between the elements: the Earth, air and trees. There is tension and excitement between the chopped tree and the dangling veins, nerves and the stump. Even after the trees are cut, the air continues to connect the stump of the tree to the rest of humanity: the elements are still one. What I am inferring is that one remains within society even after one becomes an antisocial element – like a terrorist, who is born into society and continues to be part of it, even after he/she turns towards violence.

GM: The carpet as a metaphor in that sense is more recent?

GRI: It has made its way into my work as an added object, along with others such as the globe, pedestal and the throne … now it is the central motif, the main protagonist. The carpet, for me, is indicative of religion. In many faiths it is used to pray upon, to approach God and place before divinity one’s vulnerability, hopes and dreams. Over the years, the carpet gets rubbed from use and there are small erasures that occur in the design. There is also a more violent erasure, where the carpet is punctured with bullet holes and wounds. It references religious intolerance and the violence that is born of it.  In most of the canvases, I have preferred to use a subtle palette, though for the carpet I wanted a splash of yellow and cyan to define its contours.

In these works, I see myself tampering with the tree branches and with the carpet to create interventions that lead to deeper reflections.

GM: You will also be showing sculptures along with these canvases. Can you tell us a little about the journey from working on a two-dimensional painterly surface to working with sculpture?

GRI: Working with the third dimension happened quite organically. In a sense, I wanted to express myself in a more physical manner, touching and moulding the form, and also I wanted to create actual interventions in space. So I created a work titled The Silencer in 2005. It was in fibreglass, featuring five life-sized figures. It refers to the forced silences that we as human beings take on: even though we want to scream and express our anguish, society prefers us to be silenced. I will be displaying this work at the NGMA; and, in a sense, it was an extension of my work as a painter. Over the years, however, I have managed to develop an independent language for my sculptures and installations, one that is not derived from, but rather is independent of, the painted works. The next work that followed on the heels of this was The Dead Smile (2007), which I will also be showing as part of the NGMA solo. Here, still, there is a strong resemblance to my painted works. The nude figures sit huddled together like an unidentifiable mass of humanity, covered by black cloth masks that are tied over their heads – not just their smile, but their identity is hidden, the masked or blinded protagonist is something that recurs even in my paintings.

GM: So, in a sense, your previous works are sculptural translations of your paintings – you could say that it was with the donkey in Wounded Tools that your voice as a sculptor emerged?

GRI: You could say that. I really got deeply involved to make this work. I hired a real donkey and its handler for three days and brought it to my studio to study its body language, its sinews and muscles. I wanted a slightly scrawny donkey to bring out the malnourished nature of the animal that is a mute beast of burden, an innocent underling, who is not heroic or conventionally beautiful like the horse. We created the donkey from scratch, coming up with a fibreglass version, which we then covered with toy fur. I even had to crop the fur manually – oh, my God, I remember spending hours cutting the donkey’s hair (laughs). Then painting over the white fur. It was a complete engagement and, in a sense, I really stepped into my role as a sculptor with this work. Later, I added the wounded tools, a gardener’s khurpi (spade), a carpenter’s hammer, all bandaged, with the blood and medication seeping through the gauze.

GM: In essence, the intention is to lionise the working class?

GRI: I do tend to have extra empathy for the working class and the farmers. It could be because my roots are in the village, but I think that all of us can be victims of violence one way or another. It’s part of a larger public narrative that my work addresses. Whether it is Dragged Boat (2009) [a large boat-like structure that leaves marks all over the gallery floors when it is dragged across them] or Heartbeat of a Revolutionary Object (2009), a kinetic sculpture that resembles Gandhi’s charkha [spinning wheel], the general intention is to critique violence but to also state that we can all become victims of it in some way or another. The chaos and helplessness of this predicament is best captured in the installation Panic Garden, where I have worked with footwear that rise from the ground to the ceiling. When I created this work, I was reminded of the Jallianwala Bagh massacre in Amritsar in 1919, where thousands were killed by General Dyer’s cavalry at point-blank range, and how they tried to escape, flee but the futility of it … in a sense, that has not stopped happening, even though the circumstances are different each time.

•A solo exhibition of G R Iranna’s work will run at the National Gallery of Modern Art in Bangalore from 23 January  to 15 February 2016. 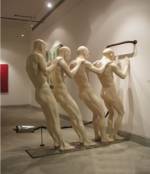 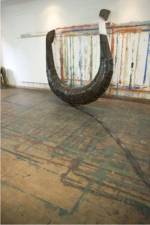 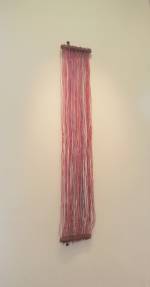