This is the town’s fifth triennial, an ambitious and remarkable event, but has the money ploughed into the arts over the years done anything to address Folkestone’s social and economic problems? 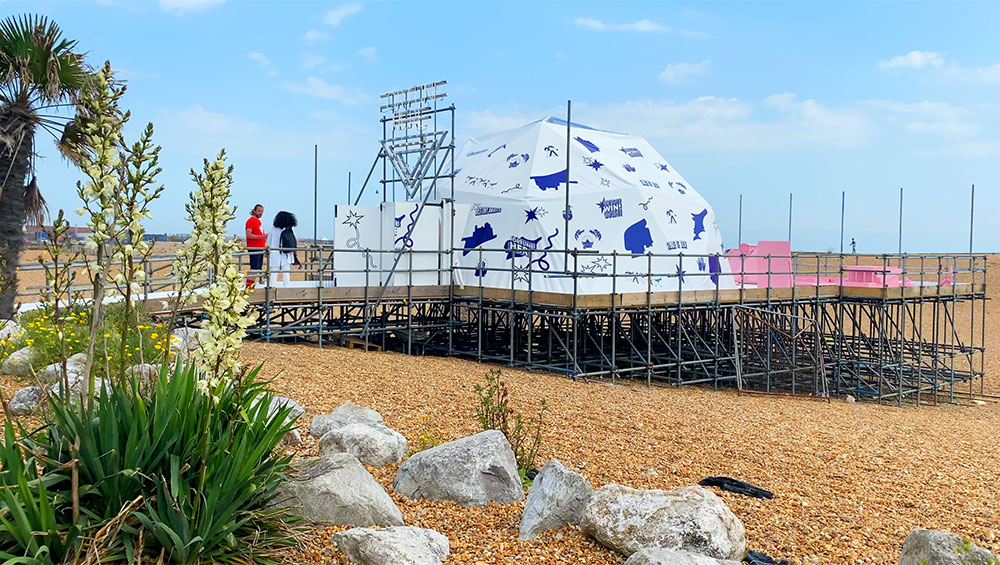 Review and Interviews by VERONICA SIMPSON
Filmed by MARTIN KENNEDY

In sweltering July sunshine, the press (plus bloggers) gather around an artwork by Richard Deacon (b1949, Wales), one of five sculptural granite benches in the picturesque municipal Kingsnorth Gardens, near Folkestone Station. Lewis Biggs, enjoying his third outing as the curator of the Folkestone Triennial, flags up this commission, and the 22 other new works that accompany it, as an exemplary marriage of genuine artistic enquiry (citing Deacon’s interest in plinths) with place (the gardens had five empty bench sites), in a way that has made this one of the UK’s most remarkable and ambitious regular art events. Although it must be said, these benches look pretty uncomfortable.

A square block of Pulhamite, sculpted by Mariko Hori (b1985, Japan), sits on the level below, mimicking the dimensions of the trimmed topiary bush beside it. The concept is poetic, both in its filling and flagging up of an absence, and in its choice of Pulhamite, a material used to simulate rock and serve the craze for rockeries and grottoes once shared by Victorian gardeners and park-keepers. Waste material, such as bricks and rubble, is used for bulk, and encased in a thin layer of Pulhamite, a render whose ingredients include Portland cement and sand (a technique invented by the firm of James Pulham, hence the name). To provide the bulk, Hori asked local people to donate objects, and she has incorporated these into three boulders, the layers surrounding which will wear thin over time and reveal - in a “time capsule” style - what was (or was not) valued in the early 21st century. Nice idea, but the sludgy grey structures are unappealing, like leftovers from a low-budget science fiction film set. If you weren’t told they were art, you surely would not have a clue.

(The same is true of the Assemble collective’s skateboard interventions along the Harbour Arm, which I mistook for construction materials that had been left lying around – mind you, they may form the best skateboard furniture ever in terms of the tricks they help to facilitate, but I wouldn’t know.)

This fifth triennial is incorporating some of the older works in the tours of the new. We are taken around Folkestone-born Jyll Bradley’s haunting hop garden from 2014 – Green/Light (for MR) – still as curious and quietly gorgeous as before, with its luminous green vertical fins supported by elaborate rope structures, drawing directly on the skilled rope-craft of traditional hop infrastructure. It is in remarkably good condition, but we soon learn why: no one is allowed access to it between triennials. Folkestone & Hythe district council has now bought it, however, which is good news for the artist, and may be good news for the neighbours if they are finally allowed to use and enjoy this mesmerising piece of art in what should be public space.

Unusually, also for this triennial, there is an air of economic activity, aside from the investments that Creative Folkestone and its founder and benefactor, Sir Roger de Haan, have initiated over the last two decades. Bradley’s hop garden is on part of the old gas works, a 0.6 hectare (1.5 acre) site recently acquired by the district council for the creation of 100 homes (though whether luxury, affordable or social is not yet declared). Along the road, two of the 2021 works sit inside, or peer directly into, the remainder of the site: Morag Myerscough’s Flock of Seagulls Bag of Stolen Chips (of which, more later) and Jacqueline Poncelet’s Looking Ahead. The latter’s response to this derelict land – disused since 1956 – is typically subtle yet inventive. In its old brick wall, Poncelet (b1947, Belgium) has embedded a series of small apertures containing kaleidoscopes and lenses that mimic bee-eyes, inviting us to see the site - albeit temporarily and via optic tricks - transformed.

Closer into town, another Poncelet series brings delicious dazzle and texture to some newly constructed live/work units, built mostly in timber by the local architectural firm Neat. Called Shimmera, the work places a blue reflective exterior textile panel on one gable end of the units, to represent the seafront just beyond them, and a green one on the opposite gable, to flag up the presence of Payers Park – a previous triennial investment - thereby activating visual and geographic connections with and beyond this hitherto neglected pocket.

This year’s iteration also seems particularly big on consultation, which is in many ways a good thing, given the enduring social and economic problems with which Folkestone struggles (it has been estimated that about 30% of children in the town are living below the poverty line). A sense of haves and have-nots is reflected in what locals call the east/west divide, the west being the more affluent area, increasingly filled with London creatives and middle-class families fleeing the capital for cheaper rents and bigger houses/studios, the east being where the long-term unemployed and various migrant and refugee populations are clustered. The tensions generated by the demographic and ethnic diversity and deprivation become very apparent in the harbour, where a confluence of drinking venues and lounging spots – fountains, benches, kiosks selling chips – can collide in rowdy, volatile ways, creating an edgy atmosphere only aggravated by the heavy traffic that speeds along the ring road that thoughtlessly disconnects the charming old town from the harbour front.

Christopher Houghton Budd: ‘What’s needed here is a high street all the way from the town hall to the lighthouse, without interruption, for pedestrians’

The confluence of the ring road, the old high street and the harbour front (and, though we can no longer see it, an ancient crossing of the river Pent that used to be here) makes this the natural centre of Folkestone, according to Christopher Houghton Budd (b1948, England). An economist-turned-artist, who moved to Folkestone seven years ago, he has created a most effective artwork to illustrate his point for the 2021 triennial. 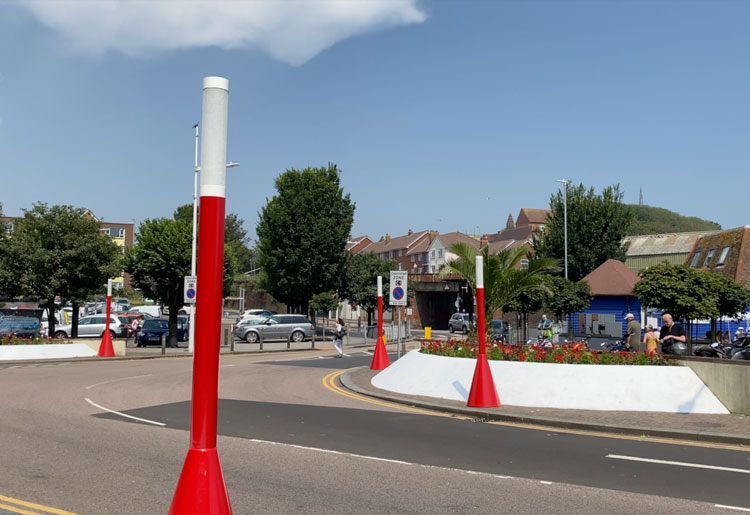 Called Forgiving Light, it comprises 12 freestanding vertical structures, their conical, red-painted bottoms filled with water to ground and stabilise them, and their slim, white grille-clad tops activated as lights after dusk. They are arranged in a circle to represent the natural heart of the town. Ultimately, Houghton Budd would like this to become a public plaza – which, as one of the few public spaces still in public ownership in Folkestone, it could be, should the council so decide.

Houghton Budd is clearly emotionally as well as financially invested in Folkestone. He has joined forces with Folkestone artist Diane Dever (b1974, Ireland) in the Urban Room Folkestone project, a gallery and workshop space for community engagement, as well as setting up a small gallery in the town and making his home on the charmingly steep Old High Street, where most of the barnacle-like housing and shops has, over the years, been bought, restored and repurposed by Creative Folkestone for independent businesses, artist studios and live/work spaces. Here, he talks with Studio International about his journey towards the creation of Forgiving Light, as well as who might want to be forgiven and why.

Genuinefake: ‘I use my creative practice to try to start conversations and dialogue about access, our aspirations … and agency’

Along Folkestone’s seafront, the artist genuinefake (AKA Rachel Stella Jenkins; b1983 Mozambique) has conjured a temporary geodesic dome of playful community-led investigation around Folkestone’s past and future, on the site of the Rotunda, the former amusement arcade building. Calling it Fortune Here, Jenkins draws on arcade games and crazy golf to amuse locals and ignite discussion around the narratives that play out on the tables and in the pastel-pink crazy golf destinations on the deck beyond, each one representing a landmark Folkestone structure. 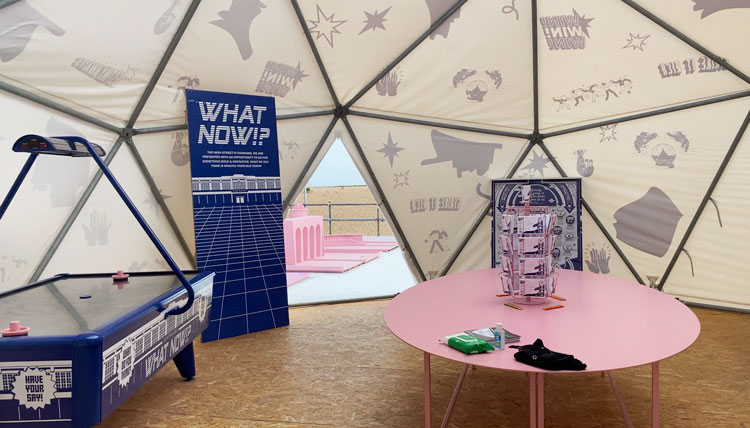 Her beautifully illustrated and executed games invite residents to address contemporary issues around ownership and opportunity, as well as the diverse priorities of Folkestone’s communities, to interrogate whose fortunes are likely to rise and fall as Folkestone evolves. 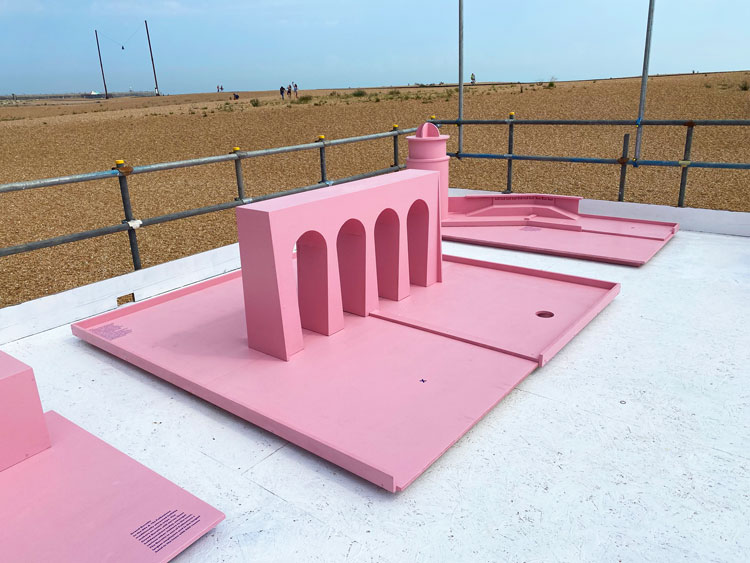 Another genuine consultation effort is represented by Wong Hoy Cheong (b1960, Malaysia), working with the architect Shahed Saleem of Makespace and the artist Simon Davenport (b1984, England), at Folkestone Islamic Cultural Centre. In 2017, Wong attached two striking minarets to the facade of this ordinary building, an initiative that this trio has now added to with a temporary structure and exhibition that represents many hours of community engagement around the potential uses for, and look of, a future Islamic centre.

Maybe it is because these last three, genuinely engagement-rich works, dive so deeply and thoroughly into their communities and topics that the bigger, brighter, more colourful works that sit elsewhere in the town seem rather superficial. Rana Begum (b1977, Bangladesh) has decorated some beach huts, for example. They look great, but is there an underlying meaning, dynamic or purpose?

The same could be asked about the decorated huts and kiosks by Atta Kwami (b1956, Ghana). As for Kwami’s archway to the sea, I find myself asking what it adds and whether it does anything other than frame the view in a boxy but cheerful way.

On the other hand, the adjacent and much quieter work of Tina Gverović (b1975, Croatia), Surface Flows, delivers on several fronts. She has painted blue outlines of clothes across the concrete ramp that used to lead cars on to the ferry linking Folkestone with France.

With the blue of the clothes in dialogue with the blue of the water beyond, it is a work that provokes thoughts of those refugees who may or may not make that illegal crossing safely, as well as the flagrant waste and awful labour conditions of fast fashion. 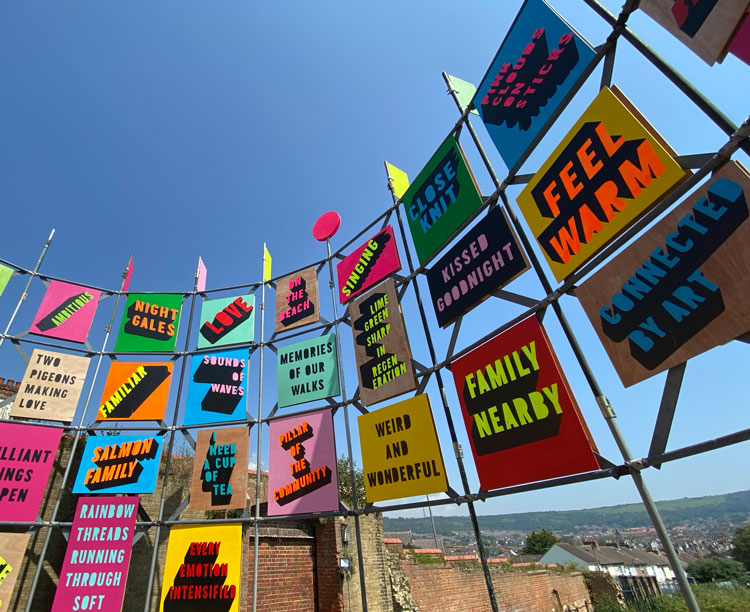 In comparison, I find the previously mentioned work by Myerscough (b1963, UK) one-dimensional. Arranged around a platform inside the boundary wall of the former gasworks is an assimilation of the best Post-it note quotes from five residents’ meetings, where people were invited to say what they loved most about Folkestone. Apparently, some of these volunteers got involved in painting these up as posters in their favourite colours, which Myerscough here frames in her trademark DayGlo colours and geometric shapes. The work is quirky and relentlessly upbeat, but perhaps we should wait to see how the council allocates the housing intended for this site before we declare it a work of tokenistic inclusivity.

There are only so many times you can pretend that art will make a difference to a struggling town. After trekking to three of Folkestone’s triennials, I left this time with the nagging feeling that nothing is changing, except to improve the lives of the creatives who have opted to live there, and benefit the developers (private or public) who are beginning to activate their assets – such as De Haan, who owns the premium harbour front plot where he is already in the process of building 1,000 luxury homes in front of rows of mostly council-owned Regency terraces, and blocking their view of the sea.

While none of this diminishes the genuine commitment, inspiration and investment of Biggs and all the artists who have participated over the years, it does beg the question: has this whole investment in Folkestone’s creative capital really been a long, cash-intensive, slow-burn version of the usual cynical, artist-led regeneration strategy of so many developers? And if that’s the case, then all this art, all this endeavour, might seem a momentary, self-serving distraction at best, and, at worst, a colourful sticking plaster over an open wound.