The fourth triennial outing for this slowly regenerating UK seaside town sees curator Lewis Biggs invite a multicultural cast of artists, architects and activists to bring their sonic, sculptural, performative and visual talents to bear in revealing new perspectives on Folkestone, its identity and its potential. Studio International talked to some of the artists and organisers involved 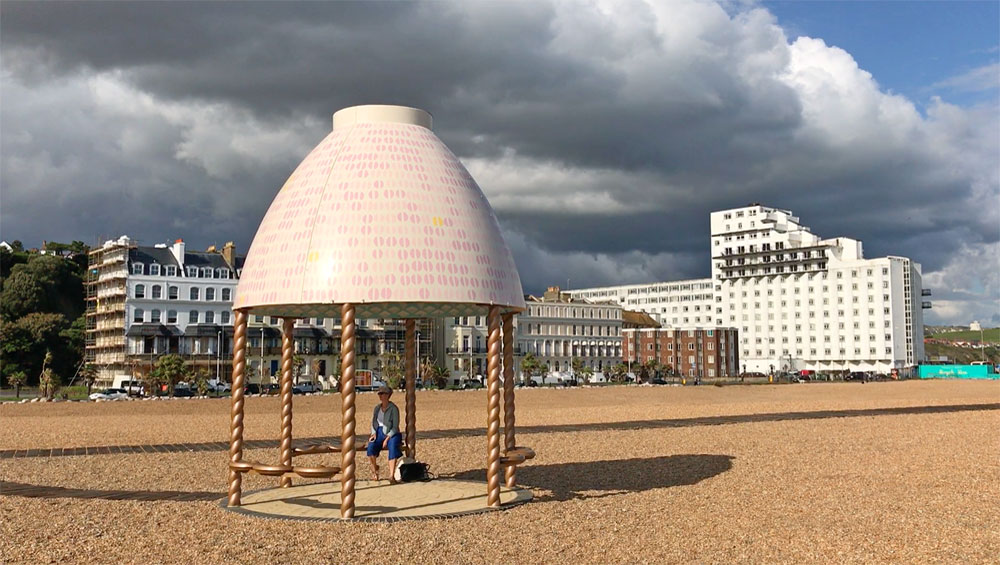 Review and interviews by VERONICA SIMPSON
Filmed by MARTIN KENNEDY

Lewis Biggs has a knack for tapping into the zeitgeist, both nationally and locally. The man who, as its founder and curator, put the Liverpool Biennial on the map in his time there, from 2000 to 2011, is now weaving his alchemical magic around the scruffy streets of this once celebrated seaside town for the second time, after the success of his first, 2014 curatorial outing. 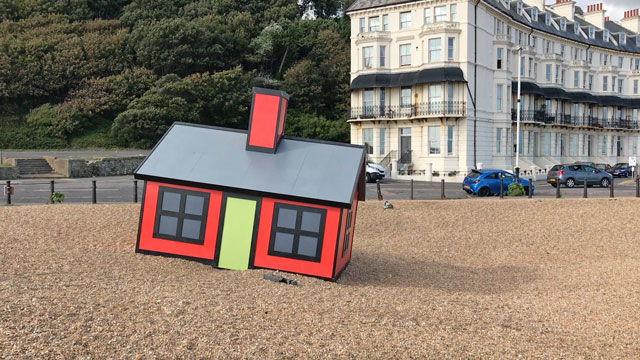 True to form, this fourth Folkestone Triennial, titled Double Edge, seems to have all the current affairs boxes ticked. When it comes to issues of great national importance, there are few more pressing than the UK’s current housing crisis. Richard Woods’s Holiday Home installation takes the form of six cute, cartoon-bright structures lurching and bobbing around the town and its harbour; always perilously balanced to remind us just how out of kilter the UK’s housing market is – the affluent few may own several homes, while the impoverished many struggle to stay afloat either in the rental or buying market.

Elsewhere, we have a meditation on – or possible antidote to – the UK’s massively depleted art education system from the ever-genial Bob and Roberta Smith, who has turned the whole town into a space for artistic investigation and self-expression, via his Folkestone is an Art School initiative - announced in his usual bright, poster-paint signage on banners all over the town. 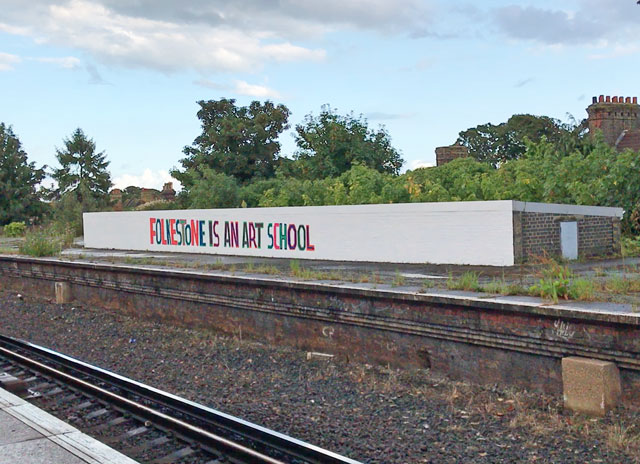 With a faculty chosen from Folkestone’s own art practitioners, and 12 students selected from the local schools and sixth form college (with Smith himself as the 13th student), the curriculum is established by, and centred on, the town itself, enhanced by 12 colourful pedagogical video “lectures” from Smith, which anyone can access.

Of the most pressing international stories, migration and cultural exchange preoccupy many of this year’s artists. Lubaina Himid’s Jelly Mould Pavilion sits on the former Rotunda leisure site (now being developed as a neighbourhood of upmarket three-storey private townhouses). On the spot where candyfloss and toffee apples once flew off the shelves, its contoured, barley-twist legs and jelly-mould structure are a reminder of where all that sugar would have come from in the first place; those things that we love the most – which we regard as quintessentially British – could not have arisen without the blood, sweat and tears of Caribbean sugar workers.

Sol Calero has also created a beachfront space (a co-production with Womad World of Art), this one a rustic, covered deck intended to be a platform for events, yoga classes or just somewhere to dry off on a rainy day or after a swim in the sea. With its vivid paintwork, jungle-plant motifs and carnivalesque graphic decoration, it is designed to look like “something that doesn’t fit in”. 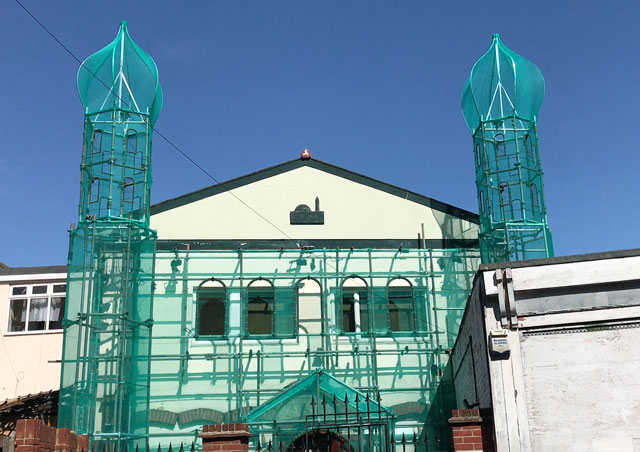 So, too, is the green mesh “mosque” structure, titled Minaret, that has been boldly scaffolded on to the plain, former industrial building that houses Folkestone’s Islamic Cultural Centre, in one of the town’s back streets. Artist HoyCheong Wong was fascinated to learn that this unassuming building has operated as a mosque for 28 years, and spent a great deal of time with the 300-strong community before devising this piece.

Alistair Upton, the director of The Creative Foundation – the charity that commissions the triennial, among many other arts-led regenerative schemes – tells us: “This community of regular worshippers said they would like to be more visible.” And visible it certainly is, especially lit up at night, when this glowing cluster of minarets and arches becomes a statement both of a migrant community’s growing confidence in its right to be here, and the hope that this confidence is well founded.

The list of triennial contributors certainly represents national and cultural diversity, with artists from Tanzania (Himid), Venezuela (Calero), Malaysia (Wong), Argentina (Amalia Pica), Portugal (Rigo 23), Lithuania (Nomeda and Gediminas Urbonas), Germany (Marc Schmitz) and Mongolia (Dolgor Ser-Od), as well as Ireland (Diane Dever and Michael Craig-Martin), although almost all of these are now UK-based. As ever, there is a good mix of established names (Craig-Martin, Antony Gormley, David Shrigley, Bob and Roberta Smith and Alex Hartley) and rising stars among them.

But, as usual, some of the most poignant experiences are conjured by the less familiar artists – the local ones who are most invested in the location (and who are perhaps keenest to measure up to the media attention generated by those big names). Ramsgate-based sound artist Emily Peasgood’s work was one of the most affecting. Halfway to Heaven is set in a Baptist graveyard, a high hump of soil, weeds and tumbling headstones wedged between a road and a terrace of houses. It dates back to the 18th century, when Baptists were not allowed to be buried in consecrated ground because their democratic and anti-elitist practices went against the Anglican doctrine. Peasgood has composed a work for five voices, whose songs emerge from funerary boxes adorned with wild flowers. Activated by visitors through passive infrared sensors inside the boxes, each voice is haunting enough in isolation, relating the story of the person buried below, but when sufficient people visit the spot to trigger all five voices, it coalesces into a moving, 17-minute-long ensemble piece that combines a churchy melodiousness with less orthodox contemporary harmonies. The work is not about religion, says Peasgood. “It talks about the history of the site and stories of the people, but the main premise is that people have to work together as a community to trigger the music.”

Local artist Jonathan Wright also delved deep into local narratives to devise his tribute to the local fishing community, Fleet on Foot. As one of three artists exhibiting again this time (Alex Hartley and Dever, who has run the Folkestone Fringe for many years, are the others), Wright was inspired by the golden posts that mark the waterside perimeter of St Mark’s Square in Venice, paying tribute to that city’s once-great naval fleet. Along the high street, he has placed gold-plated 3D replicas of the last 10 fishing boats that sail regularly out of Folkestone harbour. Fifty years ago, says Wright, “there used to be 100”. 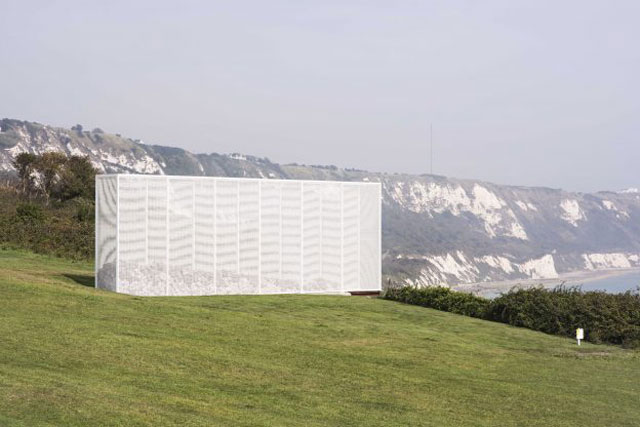 Hartley has delved even deeper in exploring ancient history in a way that resonates profoundly with modern times. His work Wall is a spellbinding monument to ancient geologies and current geopolitical upheavals. Commissioned by the Canterbury Archaeological Trust to create a sculptural tribute to the querns (Stone Age millstones made from local Greensand stone) found on this ancient frontier site, his response is a cage-like structure on the cliff edge, reminiscent of the fences used at the Calais refugee camp, the “Jungle”, just across the water. This pale, oblong box teeters on the edge of the land, with only the weighting of the querns piled inside it to prevent the structure from tipping over; the idea is to flag up the “precariousness of this border site”.

While it is easy to be cynical that the big names are there to draw crowds and critics (such as Yoko Ono at the last triennial), they mostly justify their inclusion. One can question the value of planting yet more of Gormley’s standing men in another seaside location, but when you encounter the real thing, down some seaweed-covered steps on a platform below the harbour arm – only accessible at high tide - there is a poetry and profundity to its blank, everyman stolidity. Staring out at the gorgeous green (or moody grey) of the sea and the harbour beyond, framed by rust and rotting wood, he evokes an uncomfortable combination of painful isolation and solitary tranquility. 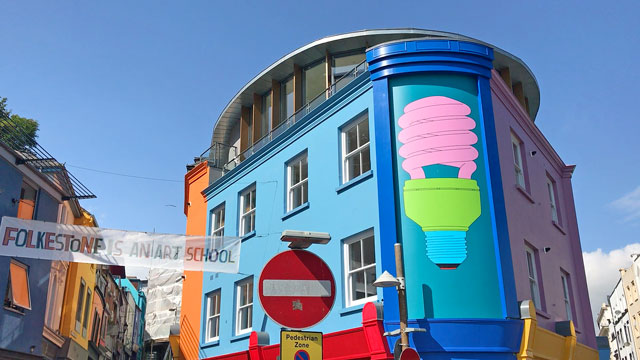 Craig-Martin’s DayGlo lightbulb, painted on the foremost edge of the Creative Quarter’s winding streetscape is also both quintessentially Craig-Martinish and yet of this place – a tribute to the substantial investment of the Creative Foundation in the arts-led regeneration of this town. An independent arts charity, established in 2002, it has generated 500 jobs and restored 90 buildings, including the Quarterhouse, a performance venue for music, theatre, dance and comedy. Talk about a “bright idea”. Its legacy isn’t just built on this triennial and the objects, structures and happenings that have occurred around its streets – many of which remain.

On the first floor cafe/bar of the Quarterhouse itself, architect Ben Allen has created an ornate gothic pavilion as a “visitor centre” for the triennial. The Clearing was inspired by a request from the curatorial team for an immersive work. Having recently finished a long stint in Olafur Eliasson’s Berlin studio, immersive is second nature for Allen. The title is inspired by a Heideggerian term, meaning a space in which anything at all can manifest, or ideas can be revealed. The Clearing also evokes trees, hence the gothic, tree-like structure featuring geometries inspired by medieval French vaulting. Says Allen: “In our work we’re very interested in how buildings make people feel. It’s a very sensory space and this structure changes the acoustic and makes light feel very different.” With mirrors placed either side of it, the effect is magnified.

Some have criticised this triennial for being too architecture or design-led, not “arty” enough. True, Balinese-British artist Sinta Tantra’s geometric envelope, in colours inspired by forties seaside advertisements, is only a superficial improvement of an uninspiring structure, and Gary Woodley’s black-and-white shapes painted on beachside tunnels are hardly transformational in that the tunnels remain glum and the location depressing. Pica’s sculptural shells – many configured in people’s windows, along with their often-bizarre personal flotsam – are also underwhelming.

But it is thanks to the accretions of visual interventions and structures both delightful and useful, from this and previous triennials –underpinned by refurbished studio spaces, streetscapes and parks – that the town’s identity is slowly shifting, from somewhere that reeked of neglect and hopelessness to a place with visible evidence of spark and spirit, a place with prospects. Marking the revival of areas once abandoned and fenced off, Biggs’s ruse to place artworks along the newly reusable harbour arm (where the train used to meet the ferries) worked a treat to draw visitors and locals out to enjoy what seems to be becoming a new, civic space, filled with pop-up cafes, eateries and seateries, with vistas back on to the town and beachfront.

Even the less arty residents would appear to see the triennial as a positive, judging by one cheery comment from a passing local to her companion, on confronting the media in the street on press day: “Yeah, it’s that festival where Folkestone’s all about art.” Perhaps Bob and Roberta Smith’s next educational mission could venture a step further: “Folkestone is an Artwork.”