Fiona Banner’s new work brings to mind a certain now legendary but relevant painting. When James Rosenquist exhibited his painting F111 (1965) at the Leo Castelli Gallery that year, and then at the Jewish Museum in New York, it was set to become an iconic piece of the art of the so-called New Realism of that time.

It was later to be incorporated in the Museum of Modern Art’s appraisal: History Painting: Various Aspects (1968). Rosenquist turned the then current orthodoxy of scale on its head. As a former billboard painter he was better equipped than most to be easy with the mega-scale. Like the sculptor Richard Serra he employed scale in order to enwrap the viewer in a total visual environment. Later, in 1997, at the Deutsche Guggenheim in Berlin, he was to install a painting, The Swimmer in the Econo-mist (1997-98), which surrounded bemused viewers with a spin-cycle of diffused art-historical references which appropriated new quotations both from Picasso’s Guernica but also from his own original F111.

Now in Tate Britain’s Duveen Gallery, happily cleared of all arredamente to reveal its own classical purity of form, Fiona Banner presents a complete reversal of that earlier Rosenquist idea of the surrounding space, the object-viewer in a vacuum, within a worked-over, definitive volume. She matches this humanist yet plutocratically-scaled environment of Duveen with two manifestations of technological near-obsolescence, relics of late 20th century aeronautics. These two objects are treated in the way that human beings have always treated game; one as hung from the ceiling, head down, the other lying like a rejected corpse across the ground.

The two aircraft in question are, however, ceremonially prepared – the one, Jaguar, scrubbed and highly polished as by a diligent housekeeper, the other, Harrier, with skin deliberately dulled marked up with feathers, in outline. The first also can be interpreted as an unsheathed weapon, the other as one neutralised. At one point, on Jaguar, the edge of the upended wing seems sharp enough to cut one’s finger, the other part of the installation, invites the viewer to lie under the Harrier nose, or beak, and experience the full threat of impact, within the ordered verticality of the Duveen Gallery. The Jaguar conversely still presents the essence of a mediaeval, flourished and Achillean unsheathed sword. The treatment of the aircraft skins – Harrier, mostly matt grey with Banner’s drawings of feathers, the other, highly reflective (to the viewers) – adds to the contrived effect. What is Fiona Banner, as an artist, seeking to express in her powerful ordering of physical form?

Certainly in her post-New Realism connotation of form, her reversal to a scenario of object(s) in void, as against enfolded viewers of the surround, is a positive re-definition of Installation Art, 45 years after Rosenquist. But there is also surreptitiously perhaps a re-assertion of feminism. Her Harrier and Jaguar can be perceived, as do all the pilots and technicians who maintained them in flight, as “She-objects”. A repossession therefore to seek out any phallic reference, would have been pointless. The treatment of the aircrafts’ skins now emphasises their conversion into art-object. But by design criteria of the 20th century they were always “beautiful”. For the future, the selection of a replacement gallery space is, as Dave Hickey claims in his catalogue essay, problematic. To consider the Turbine Hall at Tate Modern would have been to deny the fact that the aircraft are fully evolved and refined artefacts. They could have a past, a present and a future. The Duveen Galleries offer this in their human scale, which has nothing of the industrial mass of Tate Modern. For the future, possibly the restored 19th century Enlightenment space of the Royal Scottish Museum could do, for example, in Edinburgh, but not so the new Moscow Garage emporium (although the two British aircraft shells in Moscow could command a wider, even more curious range of visitors). Such ideas spring up, because Fiona Banner’s new work is memorable, intellectually challenging and truly historic. These are subtle speculations however, but they reinforce the importance of Jaguar and Harrier as artefacts of our time. Fiona Banner’s forensic research spans widely for subject matter, as her nominated entry for the Turner Prize 2002, Arsewoman in Wonderland once showed, (and ironically outraged a nameless Minister for Sport and Culture). But a twenty-year obsession with military aircraft remains. It is her personal preoccupation with words and text, which has been so compelling. Her two such texts especially, War Porn (2004) and Tornado Nude (2006) represent this interest. It is also easy to see Fiona Banner related to the late and celebrated author J.G.Ballard in certain ways, but in some respects her contextuality loops right over him. She plotted the actual biography of Sea Harrier ZE695, recorded as having crash-landed terminally after a burst tyre on impact causing the pilot to lose control on landing: he survived by ejecting. “She” was written off later, and so to be acquired through an intermediary dealer by the artist, and incorporated in her artwork (like the earlier wing of a Tornado which stands in her east London studio).

The erection of this installation in the Duveen Galleries was achieved by a full collaboration between Tate Britain (Curator Lizzie-Carey-Thomas), Fiona Banner and a specialised rigging company well known in the art world for their skill in heaving large sculptures around. The planes were broken down into smaller parts and then re-assembled in stages. The structural engineers on hand confirmed safety aspects. Did they also take into account the many months of suspension here entailed? Time comes as a variable not as a constant in engineering. The riveting remains immaculate.

The operation was in some respects easier than for major sculptures. Both objects read still as weaponry, however iconic, but stilled at last as if in an armoury. Tate Duveen’s 2010 Commission, as supported by Sotheby’s, comes in a long line of Duveen Award commissions. The artist’s achievement is truly remarkable here, both iconic in its time frame, and emblematic in context for the future of Installation Art. Although the Director of Tate Britain, Penelope Curtis talks approvingly of the challenging qualities of Shock and Awe in the new installation, this also reflects the inherent ambiguities in the project, which the artist quietly teases out. Where next for Fiona Banner? The world could be her Oyster (not the name of a new Chinook-type helicopter). 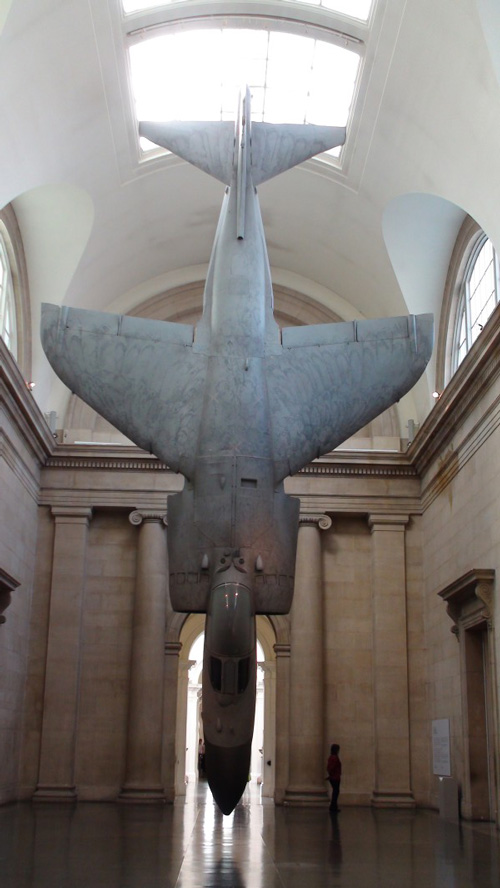 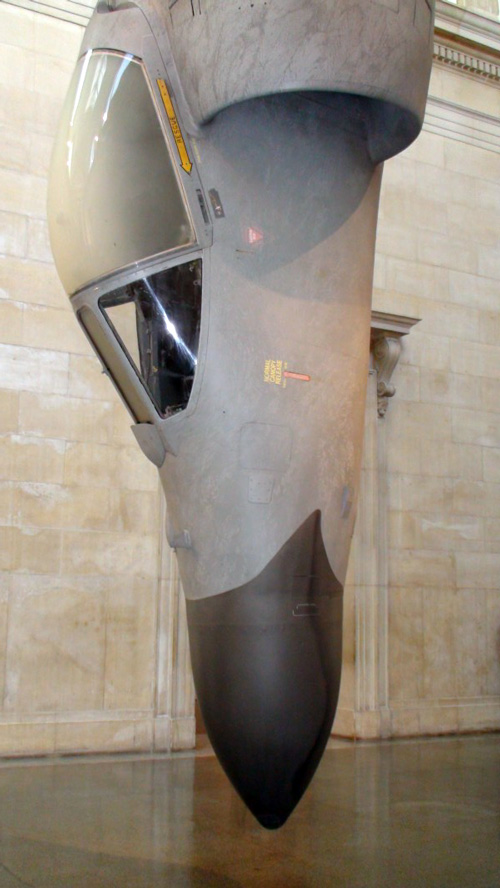 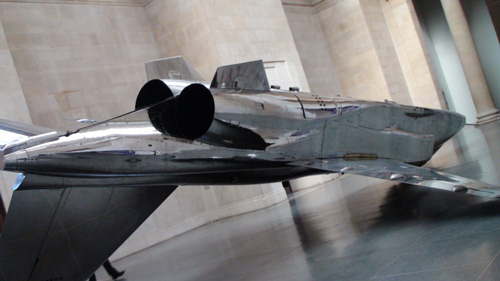 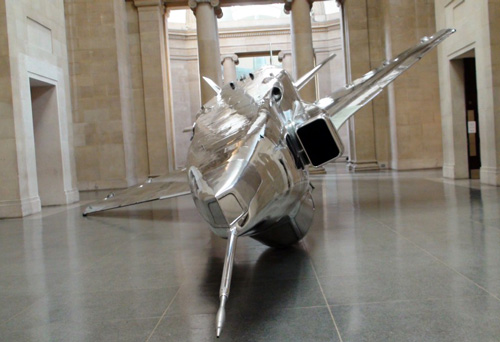 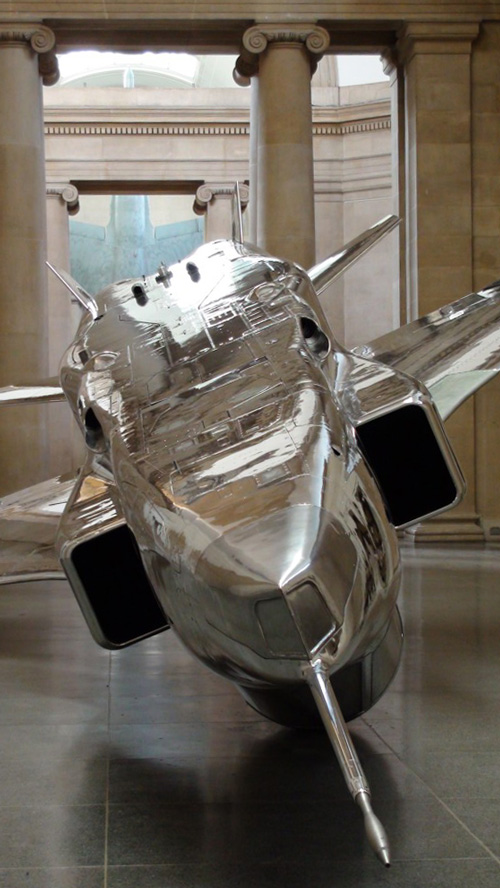