A light breeze off the river Schelde, where Brabo defeated the giant Antigone by cutting off his hand and giving the city its founding legend and name, Antwerpen (throwing hands), guides visitors to the newly constructed Museum Aan de Stroom (Museum by the Stream). The first temporary exhibition set up in this industrial edifice, adorned by 3,000 legendary little hands, invites the viewer to consider the development of western visual culture over five centuries and the key role Antwerp played in the cultivation of The Image; an intense display showing a journey through Old and New via Fouquet and Panamarenko to name but two of the impressive list of artists represented.

Designed by Neutelings-Riedijk, the striking MAS building and its substantial collection take on the dual task of emphasising and regenerating the area where it exists, ‘t Eilandje, part of the historical setting for the development of the harbour that during the 16th and 17th century helped make Antwerp a metropolis for trade, politics and culture. The challenge here for its first temporary exhibition, a collaboration of KMSKA, MHKA and MPM/PK, was set so to become a success.1

Soft violin sounds deriving from the video installation Presto. Perfect Sound (2006) by Manon de Boer, set the tone for the exhibition; the immediate sense upon entering is the attention the curatorial team have put in to the creation of atmosphere through lighting and colouring effects, making every room specific and different, carefully tuned to the contents of display. A quick glance at the guidebook lets the visitor know this is a vast show encountered slightly unconventionally, a labyrinth of discovery – for an excellent account of five centuries of images I refer the reader to the catalogue that accompanies the exhibition. This account, again unconventional, goes beyond the limitations of comprehension, which a normal catalogue would offer, rather it expands such a textbook style catalogue by including a number of primary sources, contemporary witnesses and poetry. These comprise the essays to give the reader a more rounded and broader idea of what is at stake.2 What follows below accordingly is a walk through the exhibition with focus on various images that, in particular, stand out.

The first rooms share a common theme: Gold. Gold and Power showcasing 25 centuries of rulers’ history as expressed through gold coins displayed opposite two paintings by Peter Paul Rubens. It becomes immediately clear curators here wanted to focus the viewers’ mind on Antwerp. The space themed Gold and Spirituality is a feast for the eye for those who hold a special interest in the signature “dish” of any Flemish show; The Flemish Primitives, a group of artists operating roughly between 1420 and 1520, are renowned for their skill in using oil paint to create sharply observed fragments obtained from reality, hereby slowly eliminating the medieval trend of heavy gold use. This room contains some of the lesser-known members of this group, such as Goswin van der Weyden, while more famous characters are encountered repeatedly throughout the exhibition: Jan Van Eyck and Rogier van der Weyden for example. Although tremendously impressive I have chosen to highlight one of the masters represented here, as a kind of forerunner or inspiration for the Flemish master, Simone Martini.

… Simone Memmi (Martini) of Siena was an excellent painter, remarkable in his own times and much esteemed at the court of the Popes …3 (G Vasari)

The skill Vasari is referring to is clearly discernible in the fine and detailed work displayed in this room. The four panels representing the Annunciation, the Crucifixion and the Deposition were originally part of a polyptych, known as the Orsini Polyptych or also the Passion Polyptych (c1340). Two other panels belonging to this altarpiece, The Carrying of the Cross and The Entombment, are now held in the Louvre in Paris and in the Staatliche Museum in Berlin respectively.4  Martini produced this piece as a portable altar for Cardinal Napoleone Orsini, who also features as a diminutive witness at the foot of the Cross in the Deposition panel. Painted a century before Rogier van der Weyden painted the heavily emotive Seven Sacraments, now at Louvain in Museum ‘M’, one can already spot why an artist like Martini would have been an inspiration; his depiction contains an emphasis on physical, visible suffering rather than psychological pain observed in the attention to detail, which the Flemish Primitives would later so excel at.

The press release for this exhibition highlights the encounter of old and new; the following rooms are very much about the journey artists make six centuries or so beyond Martini’s panels. These artists, such as Frank Theys and Jef Geys, seem to re-evaluate the image and then return to details, the essence of the image inspired by The Self and thinkers such as Michel Foucault; the subjective reactions The Image can provoke and the question whether or not the presence of the artist is needed is important to keep in mind.5 Photographic works representing the body and the individual object, such as Vivre d’abord and Helicopter from the 1970s, by the hand of Danny Matthys, very much conveyed this room’s concept.

The Flemish Primitives are revisited in two connecting rooms; one set up as a sort of viewing cabinet in which visitors can position themselves on stools and get up “close and personal” with Philippe de Croÿ, as portrayed by Rogier van der Weyden (c1460). The display of the ars nova artists, a more flattering name for the Primitives, is unusual and an appropriate way of viewing these kinds of detailed image; the dark room and appropriately placed spotlights give the viewer the opportunity to search out those hidden truths of portraiture during the 15th century. The adjacent space boasts what I believe to be the most striking image of the exhibition. A sketch of it adorns the front of the exhibition catalogue and flyers spread through the city of Antwerp contain her image, which may allude to some favouritism when it comes down to this particular Madonna.

Jean Fouquet, the leading French painter of the 15th century, painted the Madonna surrounded by Seraphim and Cherubim in 1452 and this image, according to the catalogue, displays a direct reflection of the ars nova in France – Tours to be exact.6 The panel representing the majestic Madonna is actually the right wing of the once complete Melun Diptych – the left wing showing Etienne Chevalier, the royal treasurer under Charles VII, and his patron saint St Peter the Martyr belongs to the Staatliche Museen in Berlin.7 The Madonna appears with one breast bare, a symbolic and metaphorical gesture linking the nourishing milk of the Madonna Lactans with the sustaining blood of Christ.8 Her bulging shaved forehead, fashionable at the period, and her skin like that of the Infant, pale as if painted in grisaille. Her throne is adorned with marble panels, pearls and precious stones and surrounded by a heavenly crowd depicted in vivid red and blue occupying the entire panel. There is something ethereal about this Virgin. Appropriately Andrew Graham-Dixon recently described her as “an idealised if improbable Madonna held adrift from time and space by cherubs” and this, I believe, is an appropriate description; she remains somehow restricted from the viewer’s “gaze”.9

Conservatively, Huizinga in 1924 described this painting as containing “a flavour of blasphemous boldness” and indeed there might be some truth in this as it is rumoured that the model for the pale Madonna was Agnes Sorel, a famous beauty of the period and the mistress of Charles VII – what better way of redeeming yourself?10

Regarding the actual viewing experience in this exhibition, it has to be mentioned that although this Madonna is placed within the realm of the godly as accompanied by Jan van Eyck’s Holy Barbara (1437), not enough attention was placed on Fouquet’s masterpiece. It appeared hidden – located on a side wall. More could have been done to highlight what is essentially the most important image of the entire show.

Central to this exhibition is without doubt the Wunderkammer or chamber of curiosities; a concept that embraced the knowledge economy of the 16th century and so invited visitors to such a room to rethink the world and to “wonder” about it via objects deriving from all over the globe. Antwerp, in the 16th century through the arrival of ships from all parts of the world carrying exotic goods, became a centre for the development of these curiosity cabinets and the catalogue contains a wonderful example of such a collection kept by the House of Savoy in Mechelen (near Antwerp).11

True, it seems, to emphasise historical reality that the curators at MAS have set up a red velvet Wunderkammer filled with a plethora of objects ranging from paintings and sculpture to precious stones and furniture. With the rise of such rooms so did the actual depiction of them in paintings. The first artist who visualised this type of curiosity collection was Frans Francken II. In his image of 1618 entitled A Collection he displays what the visitor to such a room would have encountered; a mixture of naturalia such as shells, gems, shark teeth and artificialia such as portraits and medals. The room in itself thus became a conversation piece.12 The reconstructed Wunderkammer in this exhibition equally and successfully conveys this message; visitors find themselves gazing at portraits by Rogier van der Weyden and Antoon van Dyck, photographs, representations of fauna and flora, and a painted cabinet adorned with biblical images. Visitors also encounter a sculpture by one of the most prominent Belgian assemblagists, Panamarenko. His work combines influences from science, technology and mechanics. His Pastillemotor (1991) is appropriately placed within such a celebration of curiosity.

Further rooms highlight the importance of Antwerp in the development of landscape painting and cartography in the 16th and 17th century; images such as Het Oosterhuis in Antwerpen by Lucas van Uden and De Stad Valenciennes by David Teniers II are novel examples. The section devoted to Image and Insight boasts an impressive collection of interior genre painting such as Bezoek aan de Hoeve by Jan Brueghel I. Equally, visitors will encounter a variety of allegorical paintings such as Allegorie van de Onvoorzichtigheid (1563)by Joachim Beuckelaer and the impressive painting by the perhaps most famous artist of this region, Venus Frigida (1614) by Peter Paul Rubens. Juxtaposed with more contemporary work, such as Marlene Dumas’ crude images of women, or the provocatively revealing work by Narcisse Tordoir, Personnage (1991). This represents the naked body of a young boy and so this section displays the body at its core.

The catalogue is a great account of the plausible narrative presented here: Five centuries of Image in Antwerp was the challenge set and the curators of this exhibition have more than delivered. Minor points of criticism might be about the overall lighting in the exhibition; in certain areas the spotlights are aimed directly at the objects, with light reflections making it difficult to see them. Although some parts of the exhibition benefited from the creation of atmosphere by a darkening of the space, this did not work consistently, such as in the area with the golden coin display where visitors seemed rather wary. Overall, this exhibition is well worth a visit and can be recommended in tandem with a visit to this vibrant metropolis. Even I, a descendant of Amberes, can say this without bias. 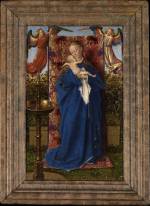