Of May beetles, submarines and walking chickens … Panamarenko Universum at the Museum van Hedendaagse Kunst Antwerpen (M HKA) brings a much cherished postwar artist back to his hometown for a final retrospective that succeeds in both renewing our interest in an enfant terrible of the art world and whetting our appetite for monumental projects in which science takes centre stage.

Panamarenko, alias Henri Van Herwegen (b1940), is an artistic multitasker. Trained at the Royal Academy of Fine Arts in Antwerp, “Pana” has been called an inventor, technician, mathematician, philosopher and, by some, a visionary. This variety of characteristics is clearly reflected in his oeuvre, which is eclectic to say the least. He belongs to the “May 1968” generation of artists, who sought change and climbed the barricades fighting for their social, economic and ecological beliefs. And although M HKA hesitates to link Panamarenko to any specific art movement, echoes of other 60s icons, such as the German artist Joseph Beuys (1921-86) are clearly felt in these white-walled rooms, especially through work such as Bottekes met sneeuw (1966), reminding us of Beuys’s memorable The Pack of 1969. However, Van Herwegen remains unique, and proves through his work, which handles a variety of media and several large-scale projects, that new artistic avenues can continuingly be explored during a career spanning 40 years.

M HKA aims to present a clear, chronological overview of Panamarenko’s eclectic work and does so by transforming its huge ground-floor space into seven thematic rooms, displaying more than 40 key works by the artist, which are accompanied by drawings, objects, models and editions created between 1965 and his self-proclaimed retirement in 2005.

In the first room, “happening news”, special attention is given to Panamarenko’s happenings and street performances, a feature he shares with Beuys. On screen, the visitor witnesses, albeit secondhand, how Panamarenko orchestrated a number of performances in the centre of Antwerp in which the focus was on “human action” and “chance”.  A key example of such an early career performance is Première van de Hersenexpansie(Premiere of Brain Expansion in Colour), which the artist performed in 1966 at the Wide White Space Gallery in Antwerp. The show’s purpose was to stimulate visitors’ senses and expand their minds through the observation of an odd juxtaposition of portraits of film stars hung on a wall and the rather mad swinging around of an inflated pig’s bladder. On another occasion, Panamarenko lit a giant cigarette, then left it to gradually burn down while he read out an article from a popular magazine.

Although these performances seem controversial, Panamarenko’s work is rather meek compared to other Flux movement artists, such as Carolee Schneemann, who constantly shocked audiences, in particular with her most famous work, Meat Joy in 1964, in which a group of scantily clad men and women performed choreographed actions to music before ending up writhing on the floor among whole raw chickens, sausages and fish. In fact, Panamarenko’s oeuvre goes beyond the performance and is far more inspiring in other aspects. Justly so, M KHA spends only a moment on the performance aspect of his career.

What is paramount is that this exhibition accesses Panamarenko’s key and, evidently, most popular work. This was a conscious decision; although the vast space available at M KHA is packed with the artist’s labour, the curators sought to be selective and not merely cramp by showcasing all they could get. The result is a balanced exhibition exploring every aspect of a long and fruitful career. The strength of the display lies, as is so often the case for the scattered panels of Old Master triptychs, in bringing together preparatory work, in the form of models and drawings, with the completed artefacts.

Good opportunities to see the artist’s mind at work at all levels include the candid Krokodillen of 1967, in the section “Silent Objects”, the aircraft-like Donderwolk of 1971, in “Fixed wings and Zeppelins”, for which Panamarenko mother helped him in carefully sewing the cotton delta wings, and the later work Hazerug (1992), representing a flying machine, and on display in “Revolutions per minute”.

Retrospectives always invite the adoration of iconic work, and that is no different here. Although the museum is keen, and rightly so, to promote the life-size Prova Car Panamarenko made in 1967, I think the real gem in this exhibition is the cryptically titled submariner Pahama Nova Zemblaya of 1996. It stands proud and gigantic in space five, “Engineered to go to Sea”. It is made out of steel and its shape is a clear reference to Panamarenko’s 1967 work Walvis (Whale). It is sturdy yet refined and complete with an air duct and a lookout tower. Although it has received plenty of international attention, the submarine is a local hero in that its components, the engine for example, were found in a shop on Antwerp’s harbour. Like most of Panamarenko’s work, Pahama Nova Zemblaya is fully functional. It can submerge to a depth of seven metres and features a round Perspex panel at the front as an observation spot for underwater life. A trip was planned with the submarine but, unfortunately, fell through due to a lack of planning. Nevertheless, this silver-grey welded giant keeps the momentum of the exhibition going, the preparatory drawings nearby offering a glimpse of the production process.

“I am not a scientist, nor someone who makes art objects. To me the most important thing is that the things I make occasionally contain a sort of poetry,” said Panamarenko. This quotation marks the entire exhibition. Many of Panamarenko’s installations, sketches, models and texts seem to have a utopian character, as if he wants to create a fictional society whose inhabitants, through imagined artefacts, can freely travel by submarine and where human flight becomes a real possibility. M HKS, with its straightforward, no-frills exhibition, has done well in offering the visitor an impression of Panamarenko’s vision. 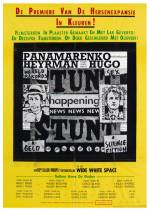 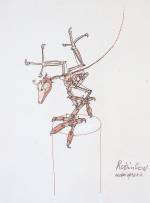 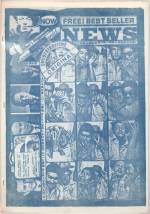 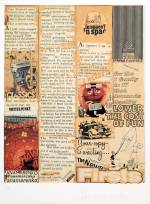 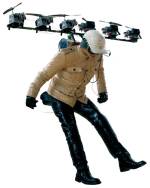