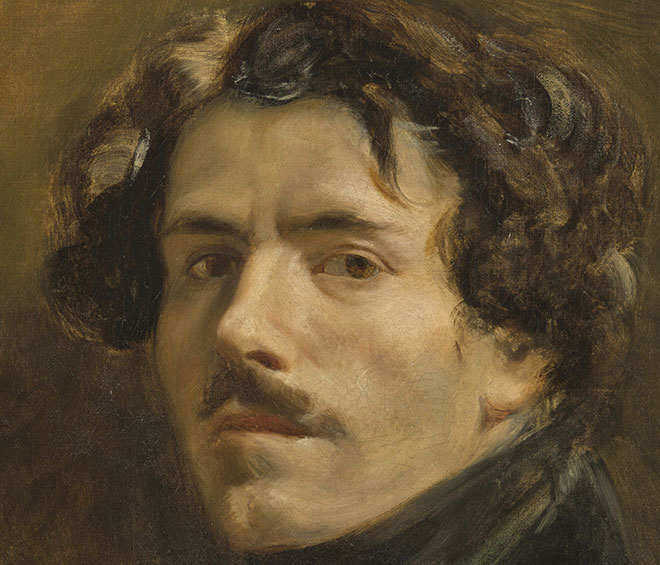 It is not often that an exhibition questions its own necessity. “Does Eugène Delacroix really need an exhibition in Paris?” reads the wall text at the entrance to the Louvre’s gargantuan retrospective of the great Romantic painter. Perhaps it has a point: as well as being represented by 55 artworks in the Louvre, including the ceiling of the Galerie d’Apollon, the works of Delacroix appear in the Musée d’Orsay and his own house museum, in the palaces of both the National Assembly and the Senate, and, spectacularly, in the Church of Saint-Sulpice. Although the impressionists may win out through sheer quantity, there is probably no painter so prominent in the French capital’s great institutions. 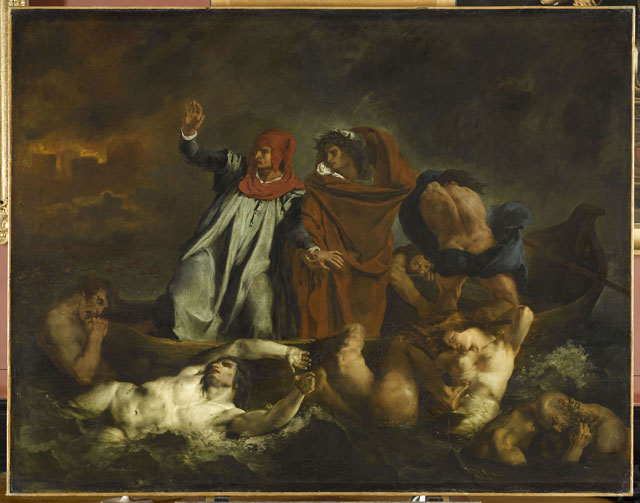 And yet, as this presentation makes repeatedly clear, there is so much more to Delacroix than even Paris’s abundant holdings would suggest. For this exhibition – surprisingly, the first in the city since 1963 – almost 200 pieces, largely oil paintings but also watercolours and lithographs, have been assembled from both French and international museums and collections. It is a remarkable proliferation of a remarkable painter, and a rare chance to survey the breadth and depth of his 40-year career. 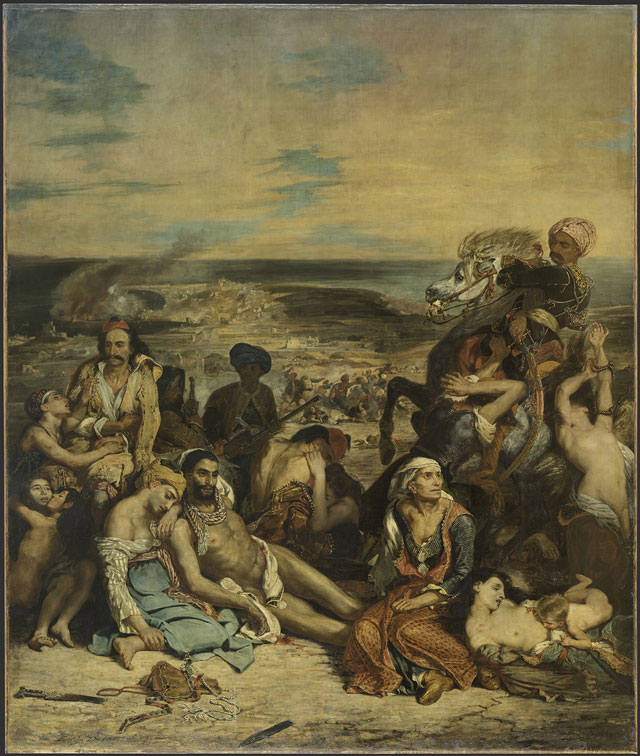 It bridges a gulf in the popular perception of Delacroix, long tied to his gargantuan works of the 1820s and 1830s, presented at the Académie des Beaux-Arts’ biennial Salon. These – including The Barque of Dante (1822), The Massacre at Chios (1824), Greece on the Ruins of Missolonghi (1826) and Liberty Leading the People (1830) – are deployed in the exhibition’s first room (the orgiastic Death of Sardanapalus, 1827, being too large to move, remains in the Salle Mollien and so forms part of a capstone to the show). Familiarity has done nothing to dim the drama and dynamism of these masterworks. For all their grandeur, they abound with intimacy. And although the sculptural figures featured are far from realist, they come alive with pathos. 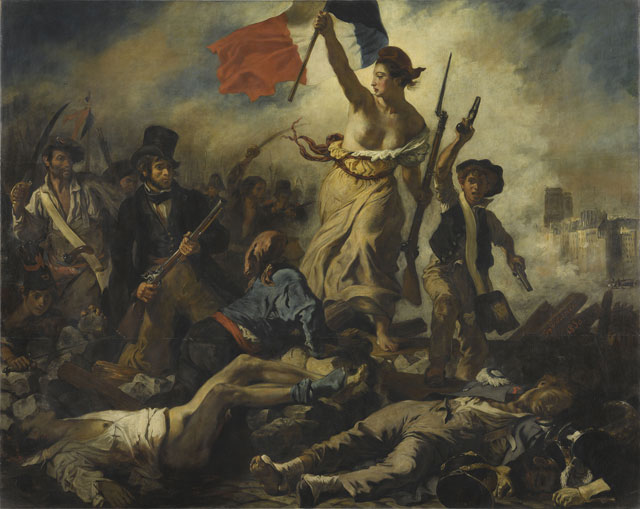 In Chios, Delacroix’s take on the Turkish massacre of the titular island’s inhabitants in the Greek War of Independence, a plume of smoke in the distance symbolises the spark of hope offered by the destruction of an Ottoman flagship. Its ashy colouration indicates the ambiguity of an action that, although a victory of sorts, might lead to further reprisals. Beneath the rampaging horse of the Turkish cavalryman on the right, hidden in the gloom, a Greek soldier is messily trampled to death. A bisected sword on the ground proves just as much a sign of despair as the assorted captives.

Delacroix spent some months researching this one painting. He consulted the memoirs of French volunteer Colonel Olivier Voutier, 17th-century Persian miniatures, landscape sketches and engravings of Greek and Ottoman costumes. For a period, he visited the anatomy theatre in the suburb of Clamart three times a week, also checking in at the knacker’s yard to observe horse butchery. This extreme attention to detail makes the overall composition a triumph of the dramatics associated with Romanticism and thought as carefully calculated as anything by his neoclassical rivals. 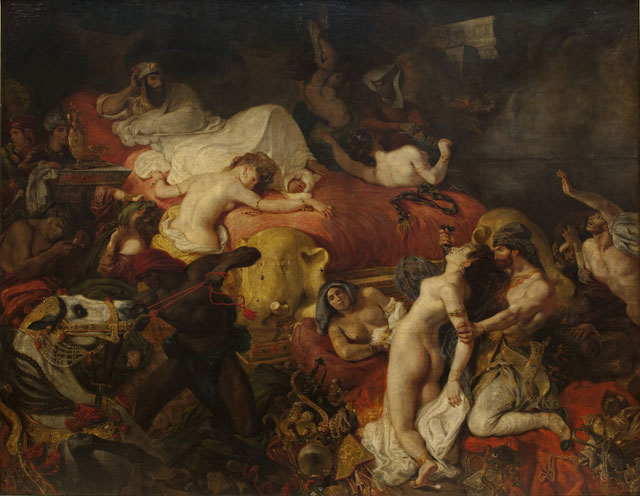 When Chios premiered in the Salon, conservative critics were horrified by its perceived lack of heroism. The Greeks did not look like the strongmen of antiquity; indeed, the most splendid figure in the canvas is the rapacious Ottoman cavalryman, with garments laced in gold. Was Delacroix glorifying in the gore? “My picture,” he wrote in his journals, “is beginning to develop a spiral momentum … O! The smile of the dying! The look in the mother’s eyes! Embraces of despair! Precious realm of painting. That silent power that speaks at first only to the eyes then captivates every faculty of the soul!” Phrased thus, instead of glorification, it becomes a visual expression of Edmund Burke’s idea of the sublime: “Whatever is fitted in any sort to excite the ideas of pain and danger.” 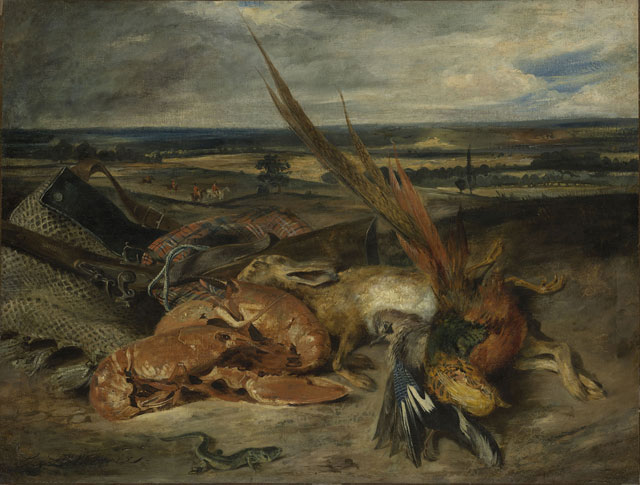 This violent excitement crops up frequently in Delacroix’s oeuvre, both where you would most expect it – lion hunts, medieval battles, crucifixions – and where you would least expect it. Still Life with Lobsters (1827), which (somewhat inexplicably) places the crustacean with various game beasts in a rolling English landscape, is charged with violence; although deceased, the richly coloured creatures seem almost to brawl. The flower paintings of the late 1948s are small explosions of clashing hues. This vehemence even carries to Delacroix’s lithographs: the likes of Macbeth Consulting the Witches (1825) take up Goya’s example in severe contrasts between darkness and light. 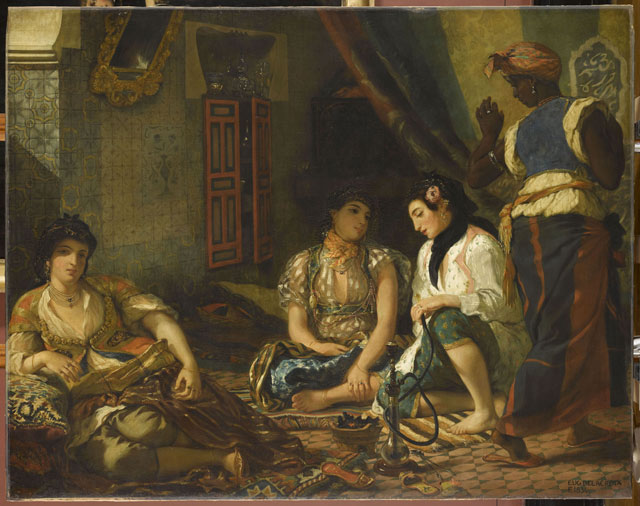 For calm in Delacroix, one must turn to his paintings of North Africa, which began after an 1831 expedition and continued though much of the rest of his life. Here, Delacroix found his own vision of the classical world, far removed from the gilded age favoured by Ingres and the neoclassicists. “Imagine what it is like,” he recounted, “to see sitting in the sun, walking in the streets, mending old shoes, men of the consular type, Catos, Brutuses … Antiquity has no more beautiful a sight.” An 1832 drawing of a seated Arabic man is tranquil and contented. The exquisite Women of Algiers in Their Apartment (1834), which more than a century later would obsess Picasso, has a surpassing sensitivity to the interplay of light on different textures and textures. A Jewish Wedding in Morocco (1841), later studiously copied by Renoir, has something of a musical arrangement, and not just because it centres on a band. Figures drift in and out of the central atrium, like themes swelling and ebbing in a symphony. 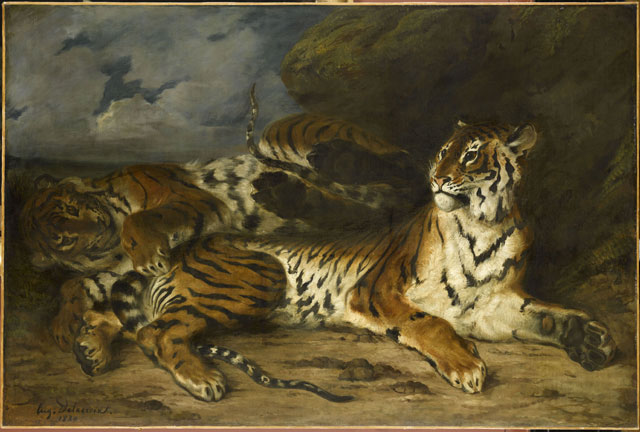 With his choice of subject matter – scenes from Greek mythology, the Bible, Shakespeare and Goethe, medieval battles and frenzied hunts – Delacroix seems far removed from the modern, the last figure in a chain stretching back to colourists of the Venetian Renaissance. But, as well as Renoir, Delacroix was greatly admired by Paul Cézanne, Edgar Degas and Édouard Manet (Manet even attended his funeral). “In one way or another,” art historian Simon Lee has written, “almost every modern attitude to colour and expression in art can be traced back to [Delacroix’s] inquisitive mind and restless eye.” As grandiose as this claim is, after the Louvre’s exhibition, it is easy to believe. For one, the importance Delacroix placed on colour as a vehicle for meaning runs through the Fauvists, Matisse and Picasso and abstract expressionism, right through to much present-day art. To this is joined Delacroix’s painterliness. Even the most harmoniously composed of his paintings reveal themselves, at close quarters, to be riots of different strokes and textures. 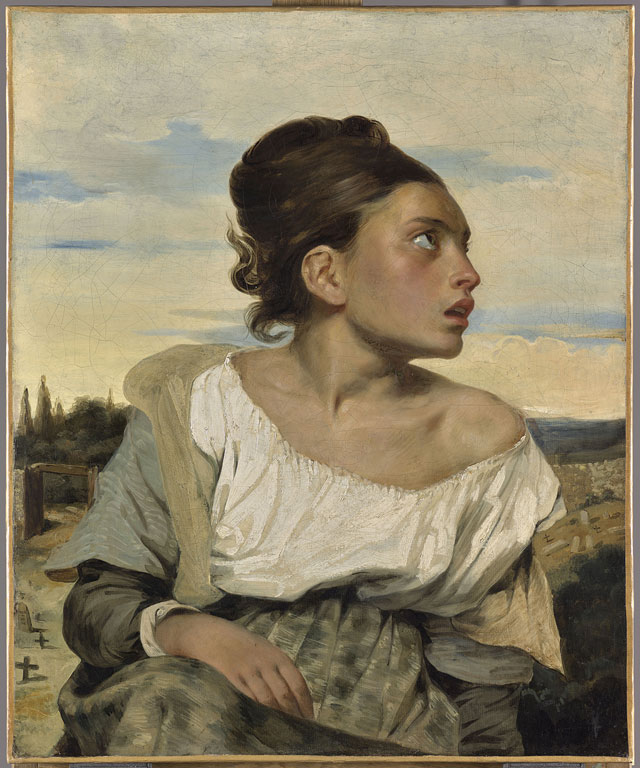 Take the morose Orphan Girl at the Cemetery (1823/24). Although the painting is harmoniously composed, Delacroix has rendered almost every element with a different technique. The sky has the limpid gloss of Claude Lorrain, from which the heroine’s face stands out with its Rubenesque blend of flesh shades. Her attire, meanwhile, is laced with thick, coarse brushstrokes, which emphasise its weather-worn humility. The whole reads as an essay in the way the application of paint itself can be a vital part of an artwork. It is this quality that endeared Delacroix to his younger contemporaries who, although wildly different in their subject matter, could place their own deliverance of paint in the lineage of Delacroix’s. But some late works show Delacroix working in an idiom more expressionist than impressionist. An 1854 study for The Lion Hunt melts into silky blooms of paint. A petite landscape of the Sénart Woods (1850), south of Paris, erupts in impasto clusters. 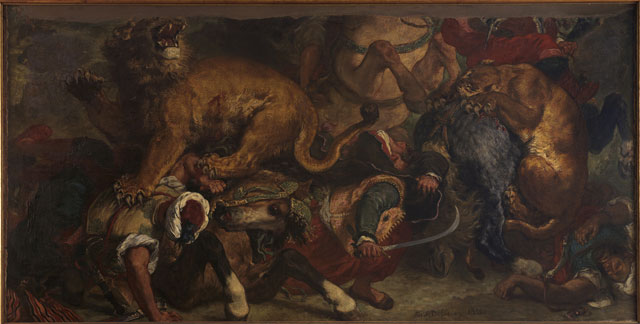 If Delacroix liberated paint, this exhibition liberates Delacroix, showcasing the astonishing diversity of his artistry and interests, releasing him from his era and reaffirming his position among the greats. As fascinating as his role in art history is, however, the abiding state imparted by this exhibition is one of awe towards the talents of the man himself. A self-portrait executed in 1937, when the artist was near 40, is full of quiet assuredness. Far from a desperate romantic, Delacroix looks in control. He knew exactly what he was doing. And for that, we should be grateful. 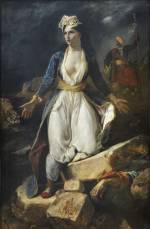 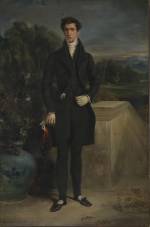 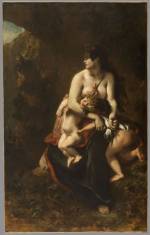 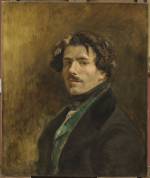