Delacroix and the Rise of Modern Art

Delacroix and the Rise of Modern Art

This exhibition includes some beautiful and touching examples of artistic hero worship, but the underlying concept is a strained addition to the misleading story of the origin of modern art

The aim of this exhibition, we are told, is to reintroduce an artist who has been woefully neglected in British exhibitions for the past 50 years – to revive the image of an artistic giant. But little more than a third of the works on display are by Eugène Delacroix (1798-1863). This is because this exhibition isn’t just about Delacroix, but also his influence on the “rise of modern art”.

Charting the origin of modern art is a noble and fashionable endeavour, but one that throws a narrow light on the history of art and colours it falsely. The notion of the rise of modern art is one that has preoccupied many curators in recent times and, as a result, many artists from the canon of the past 300 years have been lauded as the first modern artist. Turner, Goya, Manet and Monet are currently among the most popular.

It is widely believed that art progressed, and continues to progress, in a linear fashion. One innovation, or artist, leads to another. To a limited extent, this is undeniably true. But if we hope to find the beginnings of modern art, where do we start – in the 19th century, the 18th, the 17th? Or do we go back to the cave paintings of the Ice Age and claim that those dark caverns house the works of the first abstract artists or cubists or fauvists, as the British Museum bizarrely appeared to suggest in an exhibition in 2013 titled Ice Age Art: Arrival of the Modern Mind. This trend is clearly a hook used by curators to make the past relevant to a modern audience, but that surely underestimates the audience. Are we not capable of appreciating art on its own terms?

So what of Delacroix in all this? It wouldn’t hurt to discuss the man himself. He had a keen intellect and a quick wit, and was a complicated, energetic man, equally criticised and revered in his own time. He had little patience for pretence and societal chest-puffing and constantly strived for excellence in his work, right up to his death. Charles Baudelaire, a life-long friend of the painter, wrote: “Delacroix was passionately in love with passion, but coldly determined to express passion as clearly as possible.”

In many ways, Delacroix was the very embodiment of Romanticism, although his fiercely individualistic temperament made him reluctant to carry the mantle of chef d’école. Despite this, he admitted: “If by Romanticism they mean the free manifestation of my personal impressions, my effort to get away from the types eternally copied in the schools and my dislike of academic recipes – then I admit, not only that I am a Romantic, but also that I have been one since I was 15.”

While he may have shied away from grand accolades, his was the work of a true artist of that movement that pitted itself against the rigid tenets of neoclassicism. And he ardently pursued the grand aims of Romanticism in his work, casting the sublime in shimmering paint and rendering passion and tragedy in sumptuously painted flesh.

This exhibition – while omitting some of Delacroix’s greatest works – does allow us to get close to several of his masterpieces, masterpieces that undoubtedly had an impact on later generations of painters, although many are frustratingly represented by reduced copies the artist made of the grander originals. A study of The Death of Sardanapalus (1846), made by Delacroix himself, gives a good sense of the artist’s stunning understanding of colour and flare for dramatic compositions. This copy, looser and more expressive than the first, is a bewildering achievement in its own right but, for whatever reason, the larger original has not made the journey across the Channel from its home in the Louvre. Delacroix’s monumental Barque of Dante is represented here by Manet’s reduced study – a touching ode to the original, which sadly isn’t included here either.

Renoir, made a lovingly faithful study of Delacroix’s Jewish Wedding in Morocco around 1875, putting his own impressionist stamp on this iconic piece by ever so slightly shaking loose Delacroix’s contours and adding accents of bright turquoise. But just as Delacroix’s paintings moved Manet, Renoir and even Van Gogh to make versions of his work, Delacroix, too, was as moved by those who had come before him. Veronese, Titian, Rubens, Gainsborough and Velázquez all left an impression on the young artist, which is the way artistic careers often begin.

Delacroix’s direct influence on artists such as Gauguin and Cézanne feel exaggerated in the final rooms of this exhibition. Yes, these men, and many like them, revered Delacroix. Cézanne painted a strange little picture where a group of artists, including Monet and Pissarro, praise the ascendant figure of Delacroix as he rises into the clouds. But they owe as much to a host of other artists, including Delacroix’s antithesis, Poussin. And it is difficult to trace any direct influence on Kandinsky and Matisse, although the accompanying text tries to in the most tenuous terms.

This exhibition feels like an academic exercise without a convincing thesis. Many of the connections between Delacroix and modern art feel forced and exaggerated, as though an art history student is struggling to flesh out a tired idea about their favourite artist for an end-of-term essay. Shine new light on Delacroix, expose unknown passions and influences, and tell us about his process and innovations, but leave modern art out of it. Delacroix is relevant for many other more compelling reasons. This exhibition, while full of beautiful works is like being invited to Delacroix’s house for tea, only to have to talk to his fan club instead. 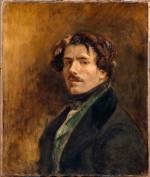 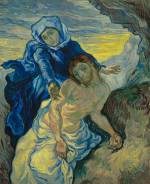 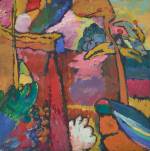