West’s willingness to take risks and reject stylistic uniformity shines through in this exhibition of works from an artist who, despite being first rate, remains so little known 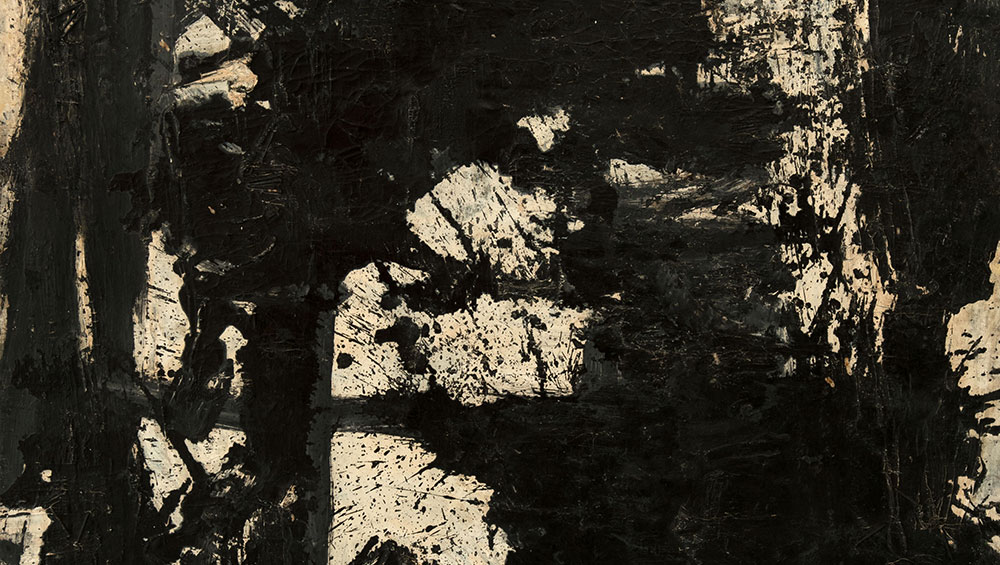 The story of Michael West’s fate risks becoming synecdochical for the work itself, so astonishing is it that a first-rate abstract expressionist could remain virtually unknown, despite the revisionist efforts that have accelerated over the past two decades. A onetime student of Hans Hofmann at the Arts Students League of New York and partner of Arshile Gorky in the 1930s, West (1908-91) painted bold abstract canvases with confident strokes that instantly confirm her kinship with practitioners of abstraction in New York from the 1940s onward. But unlike the list of usual male suspects, such as Franz Kline or Jackson Pollock, West died in obscurity, impoverished, on the Upper West Side in 1991; unlike her peers, Lee Krasner, Elaine de Kooning or Helen Frankenthaler, West was not allied to a critically lauded male artist, though she did rebuff several proposals from Gorky. 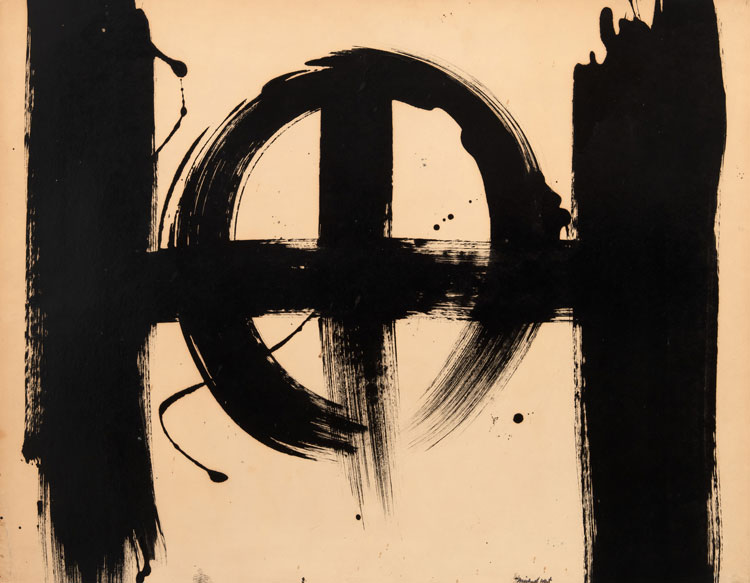 Steely individualism, then, was a gender-contingent virtue, as West, who changed her name from Corinne to Michael in 1941, knew. In 1996, the Pollock-Krasner House and Study Center mounted a West retrospective, and her name punctuates a few recent catalogues, including Joan Marter’s Women of Abstract Expressionism organised for the Denver Art Museum in 2016. Until Hollis Taggart’s survey in 2019, the work was inaccessible in any depth. This is entirely circumstantial in light of the debilitating sexism we now know female painters of West’s generation endured, particularly so given the masculinist posturing of her chosen cohort. We owe the paintings’ current availability in large part to the photographer and collector Stuart Friedman, who owned West’s work, purchased the contents of her apartment at a municipal sale following her death, and subsequently sold the archive and paintings to Taggart. 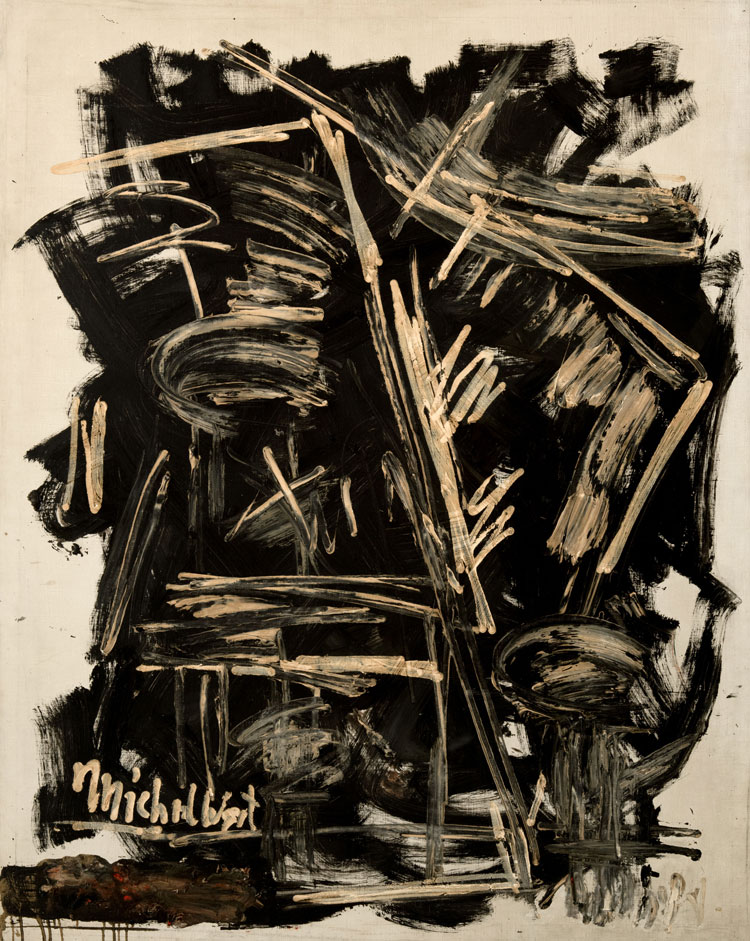 Epilogue examines West’s primarily monochrome work in black, white, grey and caramel tones in which oil is applied thickly with brushes of varying widths, a palette knife, and perhaps even straight from the tube, as in White Writing (1966), where peaked deposits suggest the tube was held momentarily at the end of several downward strokes. Most works date from 1964 to the mid-70s, with two outliers (both Untitled) from 1947 and 1948, years that saw the inauguration of Pollock’s drip technique, Mark Rothko’s multiforms and Barnett Newman’s zips, as well as the suicide of Gorky. Thus the inclusion of these earlier works, from the moment when abstract expressionism coalesced as a movement, solidify West’s participation right from the start. The swirling cacophony of Untitled’s (1948) triangles and circles in blue, white and black share a jigsaw-puzzle-like interlocking of forms that recalls Krasner’s contemporaneous Little Image paintings and evidences West working through the mythic symbols and scumbled surface texture of Richard Pousette-Dart, a friend. 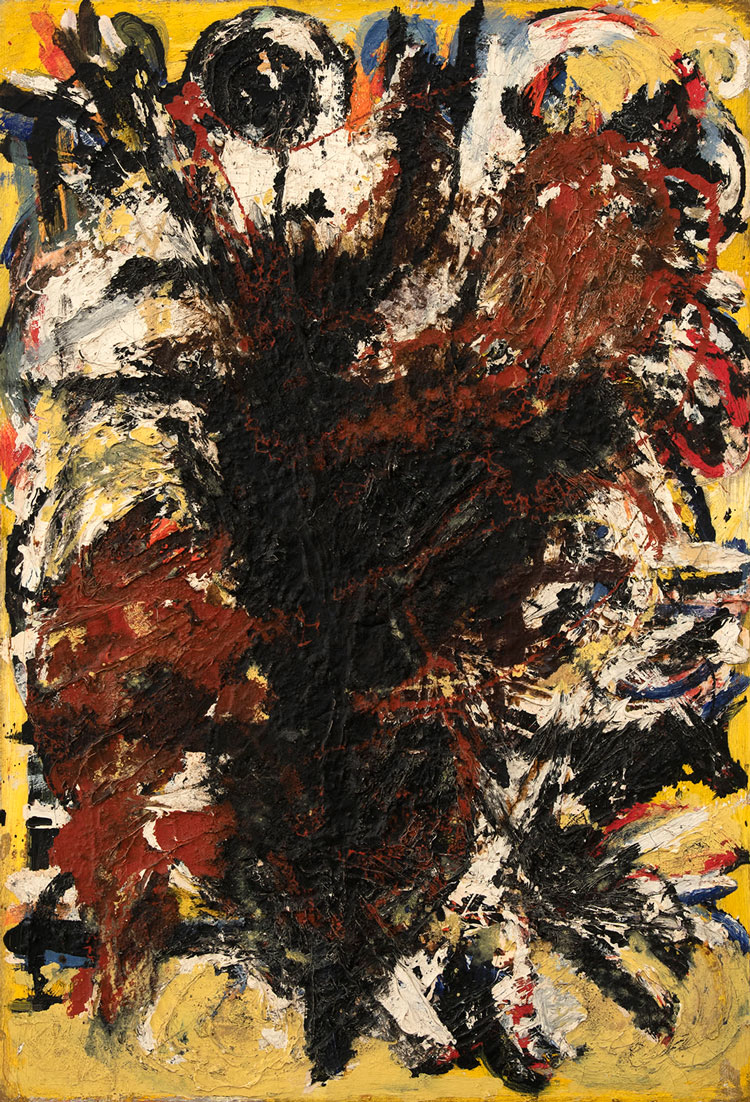 The 60s and 70s paintings that are the focus of this show fall into at least two bodies of work. The canvases from 1964 to 1969 show West pushing dense expanses of black paint across the canvas, out toward its edges, often as a ground for marks in contrasting hues. Sometimes, these marks form blocky patches resulting from the repetition of a scratch-like staccato gesture, as in The Eclipse (Eclipse in Reverse) (1964-67). 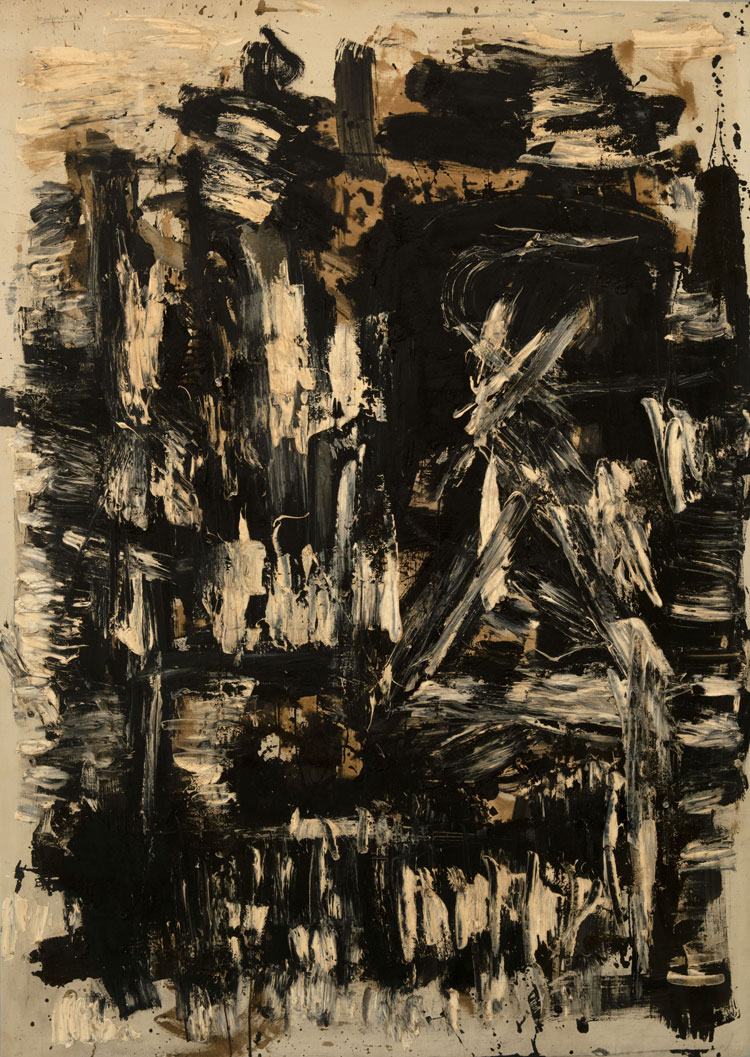 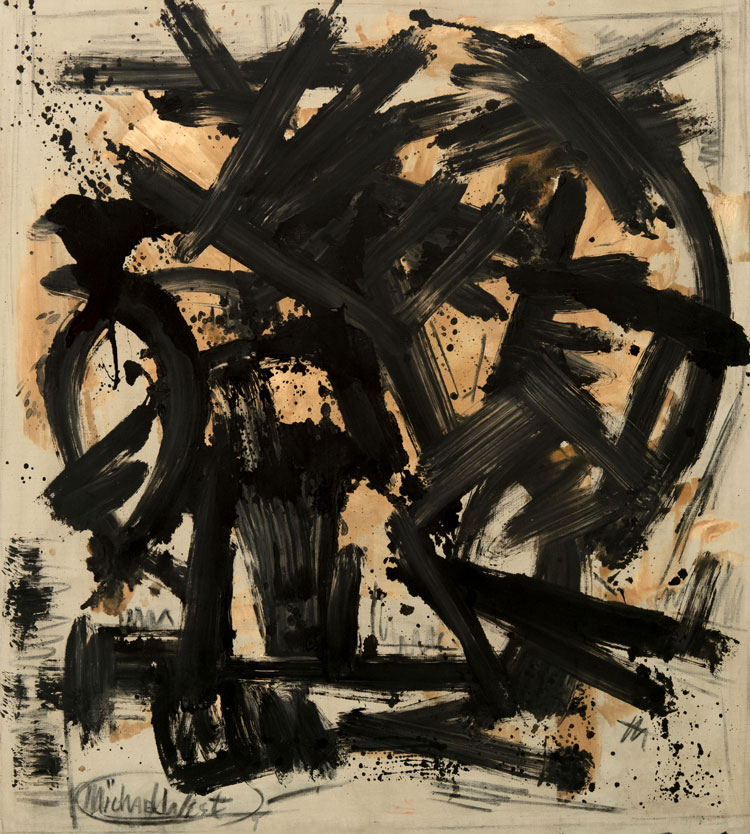 Elsewhere an armature of intersecting black lines structures the composition like the branches of a tree, as in Beginnings (1968). Often, West appears to have worked wet into wet, her loaded brush picking up the black underneath. She achieved compositional unity by consistently echoing the orientation of her marks within a given painting. The white strokes that lilt upward from left to right in the upper third of Epigraph (1966), for instance, resonate with those floating against a primed ground in the canvas’s lower right corner. 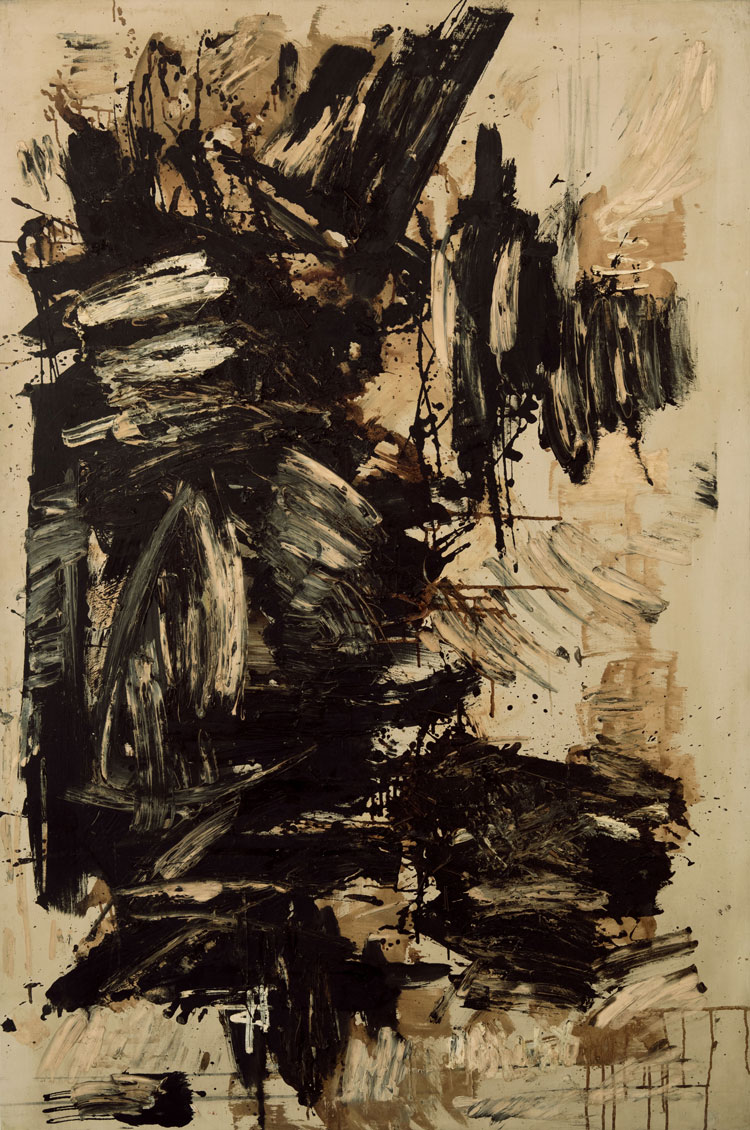 The work changed in about 1970, when West’s structure bent towards horizontals and verticals, her brush strokes tightened up to become almost calligraphic, she decreased the density of her paint, and she reduced her palette, though not exclusively, to black and white. Of this later period, Study (1970) is an exemplary minimalist canvas featuring a sole black band intersected by a narrower strip at a right angle, like a tipped-over T. Atop an uneven washy white ground, its simplicity is offset by a restrained yet assured spattering of black paint. Several canvases feature a circle containing a cross, an intriguing symbol that must have held special import for the artist. 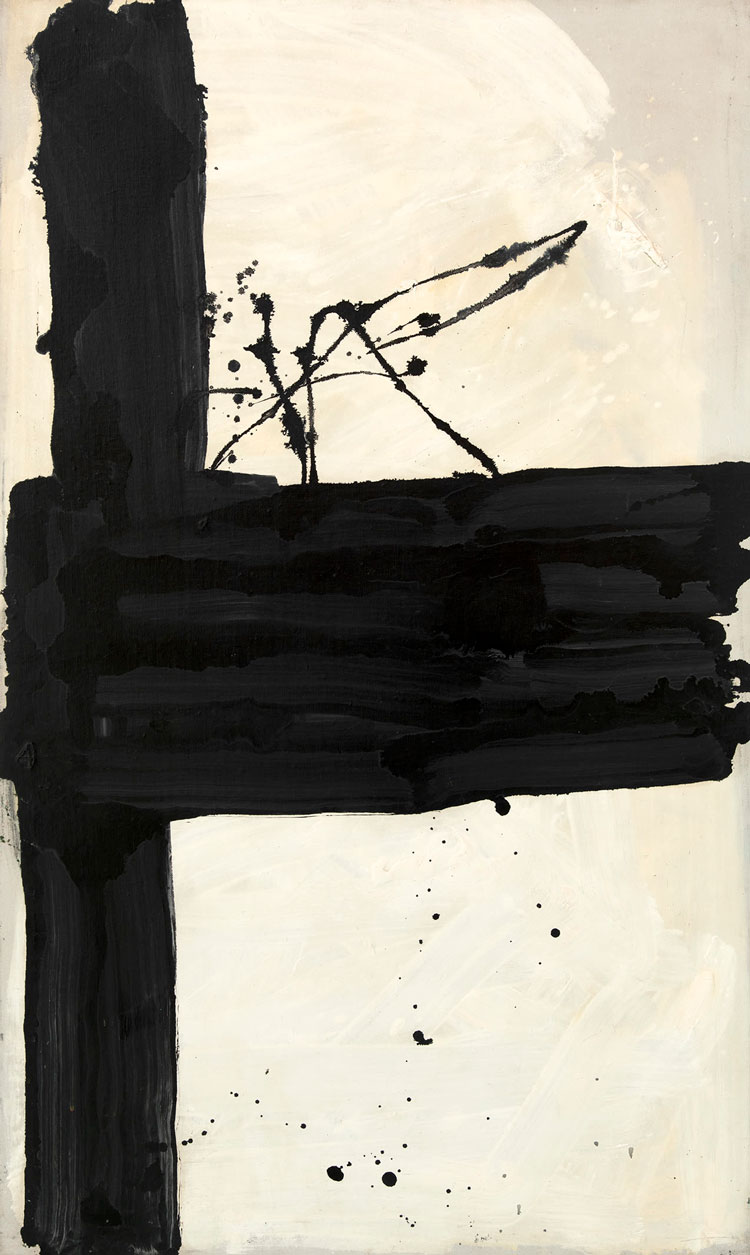 West’s grisaille palette, planes of brushstrokes fractured across the surface, all-over composition, and linear rather than gestural or biomorphic structure suggest her debt to cubism rather than surrealism, which motivated so much abstract expressionist painting. For Pollock and Gorky, surrealism was a means of subverting the strictures of conscious thought and the limitations of tradition. But West’s path to abstraction demonstrates instead a sustained interest in selectively appropriating from the culture around her, as did Betty Parsons, rather than isolating and exploring a single influence or technique with such focus that it would become her signature, as did Rothko and Pollock. 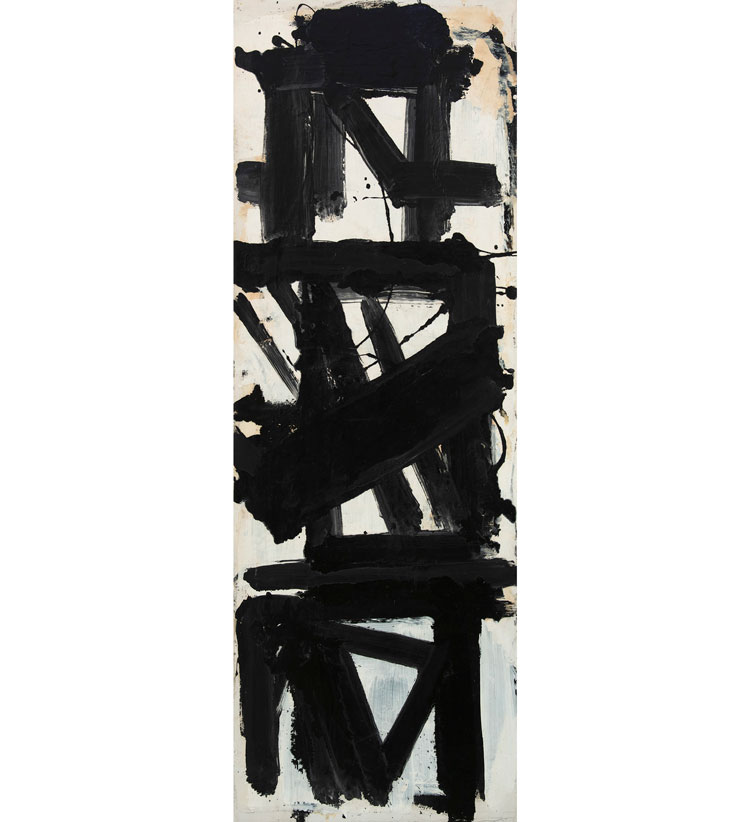 West’s titles, especially, point to an awareness of abstract painting as part and parcel of a new and ever-changing global (rather than American) order; Dagger of Light (1951) and Nihilism (1949) (neither of which are in this show) gesture towards nuclear holocaust, whereas White Writing (1966) acknowledges Mark Tobey and Nyo Ze Tai (1975) records mid-century abstraction’s desire to circumvent European precedent by routing itself through Asian art instead. The nails embedded in Invisible Numbers (1969), one of the strongest paintings in the show, respond to Pollock, while the same work’s scabs of paint evidence West’s interest in the materiality of European painters such as Jean Fautrier or Jean Dubuffet. With this receptivity comes a willingness to take risks and to stand against the stable identity associated with stylistic uniformity. 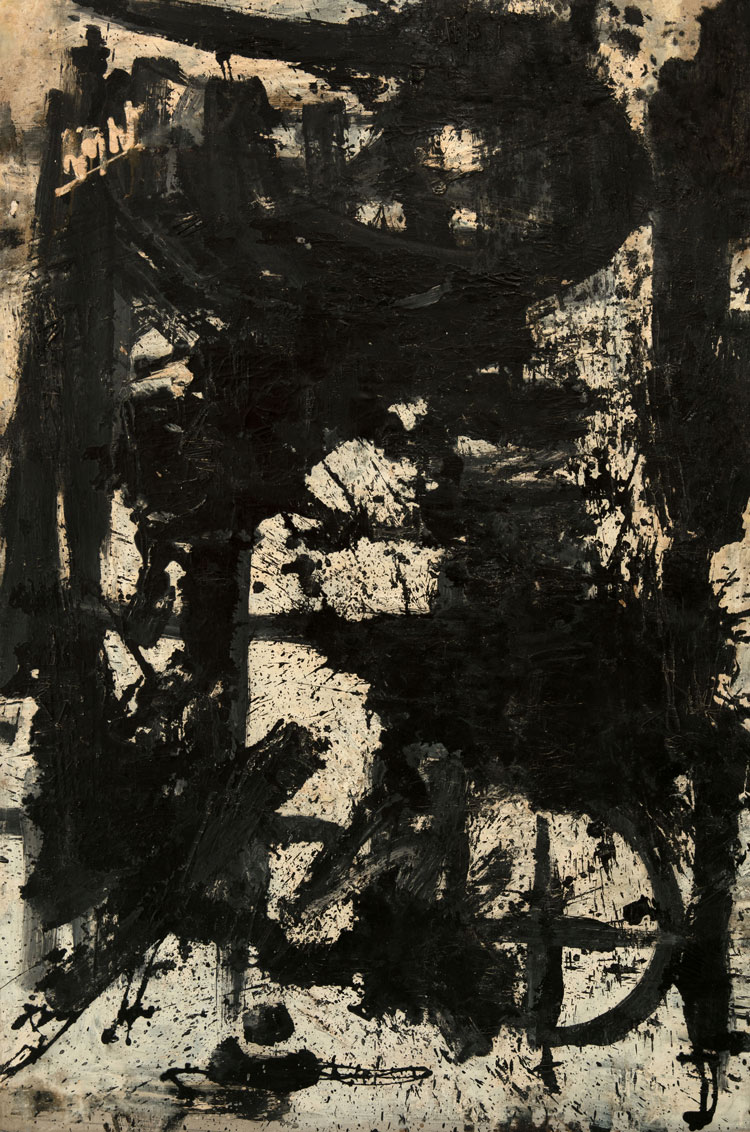 In photographs printed in the catalogue, West appears pensive, a self-fashioning apropos of a writer, painter and poet. This paper archive awaits full treatment (a catalogue raisonné is underway), but several documents reproduced in the 2019 catalogue affirm their richness. “To paint the dream world is only a part,” West wrote, “[it] is to miss the whole world which to me is more exciting – since it includes everything and thus gives opportunity for greater and more minute analysis of feeling.” The sense of empathy these words impart – in addition to the paintings – are a welcome corrective to art history as we know it. 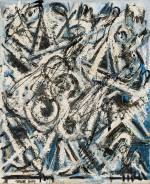