Susan Mullin is both an expert on and a friend to the Ghanaian sculptor El Anatsui. This second edition of her must-read book expands on his incredible artistic practice 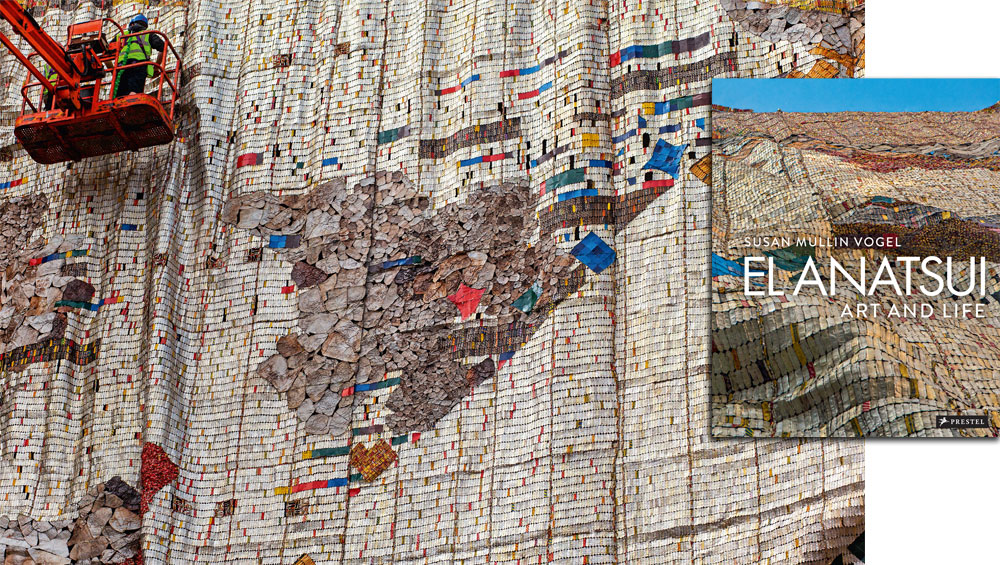 El Anatsui: Art and Life by Susan Mullin Vogel is published by Prestel.

El Anatsui’s career-spanning survey Triumphant Scale drew massive crowds to Munich’s Haus der Kunst when it opened in March 2019. From there it was feted in the Arab Museum of Modern Art, in Doha. The exhibition was downsized for Bern, Switzerland, in March 2020, where it coincided with the announcement of the Covid-19 pandemic. Triumphant Scale was curated by Chika Okeke-Agulu and Okwui Enwezor (who died in March 2019). Together with the, now 77-year-old, Ghanaian sculptor, they redefined Africa’s place in the global art scene.

In 2000, after making art for more than 30 years, Anatsui began to create massive works using aluminium bottle tops. The radical departure from previous work led to international acclaim in just five years. Author Susan Vogel Mullin writes,  “His hanging metal sheets became established in the international art world as among the most conceptually complex objects being made today. How did a 60-year-old artist living in an obscure town in Nigeria invent an art form capable of challenging classifications of ‘painting’, ‘sculpture’, and abstraction that are keystone concepts in the discipline of art history?’” (13)

The Nigerian-born Enwezor’s large-scale exhibitions in Europe, Africa, Asia and the US challenged the pejorative view of contemporary African art, and led global debate on art and post-colonialism. He was appointed director of the Haus der Kunst, in Munich, in 2011. He was also the founding editor of Nka, a magazine that focuses on contemporary African and African Diaspora art within the context of modernism and postmodernism, and he was instrumental in displacing European and American art from its central position. As director of the 2015 Venice Biennale, he contributed to changing the manner in which international contemporary art was presented and understood.

Okeke-Agulu, who now teaches at Princeton, published an interview with Anatsui in 1994, in the inaugural issue of Nka. The various career firsts of Enwezor and Okeke-Agulu helped to champion Anatsui’s unique work. Since Anatsui exhibited at the Venice Biennale in 2007, his work has had a significant impact on the world of contemporary art, and his metal mosaic sheets made from thousands of bottle tops – crushed or folded and joined together with wire – have graced the facades of many buildings, including that of the Royal Academy in London.

The second edition of Susan Mullin Vogel’s book El Anatsui: Art and Life (first published in 2012) not only provides a well-researched story of Anatsui’s remarkable art and life, but is based on a friendship that began in the 90s. Mullin Vogel has been a professor of African art history at Columbia University, a curator and a film-maker. In the film Fold Crumple Crush (2011), she documented Anatsui making his mosaic sheets over a three-year period, including his exhibition for the 2007 Venice Biennale, and in Nsukka and the US. She became one of the leading experts on his creative development. In the book she says: “The feat that interests me here is not the unprecedented success of an African artist at the highest levels of world art – impressive though that is – but rather the late-in-life invention of an art form of enormous conceptual and material complexity, and the equally momentous but somewhat overlooked stylistic leap in midcourse that would sustain the bottle-top art form with fresh ideas so far. How any artist makes the jump from one mode of expression to a more eloquent one always remains a mystery, yet deploying only bottle tops, Anatsui has done so twice. The first leap looked abrupt and dramatic; the second was almost invisible. In reality, both were steady steps in an intensely thoughtful exploration that continues today.” (13)

Vogel’s text in El Anatsui: Art and Life is based on conversations with the artist that span 20 years and backed up by her eloquent scholarship in African art. The need for a second edition, she explains, is the fact that his art has seen a radical departure, a second body of bottle-top sheets produced in the past 10 years. “Anatsui’s complex practice has long been grounded in materiality – in the use of specific materials imbued with meanings – and his work, especially after 2000, must be understood through his intense, fine-grained focus on the fertile possibilities that might be allowed by his chosen material, discarded aluminium bottle tops. The bottle-top medium is so distinctive that the metal hangings could seem to be all one thing – but this has never been the case.” (6) El Anatsui: Art and Life breaks down his oeuvreinto style groups, enabling the examination of individual pieces. Following great recognition at Venice in 2007, the artist moved from the metaphor of cloth to more painterly works.

El Anatsui was born and educated in Ghana. He is now based in, Nsukka, Nigeria, the college town where he has lived for 45 years. In London, in 1995, his response to a question about obstacles to making art in Africa turned to the difficulty of finding eloquent, nurturing materials elsewhere: “Art is something that is environment based … if you take a tree that thrives in the tropics and plant it in a temperate clime, it might not survive. The same applies to an artist.  If what you derive your nurture from is not much in the new environment, you might find it difficult to create.” (14)

In 2007, he reflected on the significance of his move to Nigeria: “If you leave your country, you develop a kind of nomadic mentality. If I had lived in Ghana, my mind wouldn’t have roamed, I wouldn’t have expanded my experiences, or I would have been too comfortable.” (35) Although he has travelled regularly (having a university salary), attending international residencies and cosmopolitan fairs and biennales, and had access to libraries, he has not been away from home for more than a couple of months at any time throughout his productive practice. When he attracted international acclaim, he stressed that his art forms had been building for decades: “My exhibition history started from this campus [in Nsukka], and from there went to Enugu and Lagos.” (13) When he graduated from university in Ghana in 1969, he situated work between media: painting, graphics, sculpture and ceramics and across hierarchical areas of fine art and craft, heritage and invention. The metal sheets were thus a natural progression from the early work that challenged boundaries, being at once true to his African heritage but highly informed by international contemporary art practice.

From his Nsukka studio, Anatsui creates his monumental sheet sculptures for museums all over the world, with the help of a team of assistants who shape bottle caps from distilleries in Nsukka and across Nigeria. Three vast commissions for Triumphant Scale required a further 150 temporary workers, including many from the local community who worked from home plus students, teachers and civil servants. Nsukka’s traditional monarch awarded him an Igbo chieftaincy title – a rare distinction, in recognition of his contributions to local life. The architect David Adjaye, who designed Ghana’s new national cathedral, in Accra, has asked Anatsui to make an altarpiece.

Vogel describes the metal hangings as expressing, “opulence and poverty, majesty and squalor. They are monumental and yielding, lyrical but harsh, with sharp cutting edges. They are handmade out of mass-produced materials; high art made with lowly craft tools. Their negligible material is stolidly evident, yet they feel ethereal. They can seem alternately bulky and thin, hard and soft, ancient and new, African and global. Alternately and simultaneously they evoke architecture, painting, and sculpture. The metal hangings radiate contradictions.” (14)

Vogel weaves aspects of conversation with the artist over 20 years with rigorous research from other sources of Africa’s history and material culture. One aspect that brings the artist to life is the impact of his teaching, through comments by his students. In 2007 Anatsui said of teaching: “If you pass some time in the classroom, you kind of get saturated with ideas. You have to really research, search for challenges to give your students that will draw them out. And in doing so, you are unconsciously drawing yourself out too. The teaching practice helped to improve my art practice.” (38) In 2011, one his former students, Nnenna Okore, recalled: “[Professor Anatsui] just looked at me and said, ‘There are so many interesting paintings all around you.’ And I was like – what is he talking about? ‘Look at all the accidental occurrences around’ – I think that’s what he called it, accidental occurrences. Why don’t you just tap into that?’ He showed me right then – it had just rained and you know when the gas drops into the [puddle], it forms a rainbow. He said, ‘That’s just a painting right there, don’t you see it? Look at the walls, look at all the markings and the paint chipping – those are paintings! … use them to speak about paint and how colour occurs naturally and how they synthesise and disintegrate and recompose themselves in our natural environment.’ I was so thrilled. It resurrected this joy to make art again.” (38)

For the group show Ghana Freedom at the 2019 Venice Biennale, Anatsui created Earth Shedding Its Skin, a wide sheet of brilliant yellow caps corroded by silvery cobwebs, through which the underlying wall could be seen. It conjured the elegiac mood of his early wooden sculptures. Vogel describes the significance of Anatsui’s art with great acuity throughout her must-read brilliant book, ending on an inspiring observation for the future: “Anatsui’s art is rare, even anomalous, in the contemporary art world. His work in fact embodies a constellation of unusual values: radiant beauty, an overtone of spirituality and immanence, and a close connection to community and solidarity. These qualities set Anatsui slightly apart from the international art world  in which he now moves, but they are somewhat submerged, not overt, and relatively little discussed, probably because they do not quite seem modern. If beauty, generosity, and sincerity without naivete are atypical of the art shown in today’s fairs and biennales, an authentic spirituality and a belief in the value of community are equally uncommon, although they are evident everywhere in Africa today, as they have been for centuries. They are perhaps uncomfortably close to inherited values that European modernity cast aside, so that adherence to them can be seen as not modern.

“Anatsui’s metal sheets remain outside categories of western art history because they developed out of another art history, located in another art world, from which he began watching the art of the west long before the west began to notice artists like him. That very fact may be part of what makes Anatsui’s art so useful in rethinking art for the future.” (201) 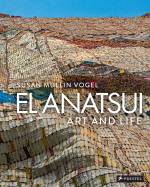