Egon Schiele’s controversial drawings, which peel back Vienna’s bourgeois façade to reveal a world of sex and death, go on display at the Courtauld Gallery for the UK’s first ever show dedicated to the Austrian artist’s radical work

Over the course of the past 12 months there has been a flurry of exhibitions about, or heavily featuring, art from the German-speaking world. But until recently it has been largely neglected in the UK, for the most part it would seem, because two world wars and a preference for French and Italian aesthetics limited the British appetite for German and Austrian art for most of the 20th century. “But I don’t think that really explains why Schiele, in the 60s and 70s, wasn’t collected by museums in this country,” says Dr Barnaby Wright, curator of Egon Schiele: The Radical Nude. “I think it partly goes with the frank and unsettling character of [his] work, which didn’t find a sympathetic voice over here. It was a hugely regrettable missed opportunity.” And so this latest exhibition at the Courtauld is the first in the UK to be dedicated solely to the Austrian artist, a fact that makes it both fresh and familiar. Schiele, after all, is no unknown, but to see so much of his work in a single exhibition in London for the first time is hugely exciting.

Just like his contemporary and fellow Austrian Sigmund Freud, Schiele [1890-1918] peeled back the gilded veneer of bourgeois society to reveal the true preoccupations of Vienna’s inhabitants, namely sex and death. In art and psychoanalysis the two often go hand in hand, and are at the root of a deep well of anxieties that Freud believed manifested in seemingly unrelated phobias, dreams and apparently accidental slips of the tongue. Schiele had his own equally insightful way of exploring hidden fears. The young artist laid bare his own uneasiness in paint and projected his troubles on to the contorted, naked bodies of his models. Schiele, after all, knew as well as anybody the perils of the flesh. His father died of syphilis in 1904, and childbirth was still a risky business for both mothers and babies. Schiele’s own mother lost several sons to stillbirths and miscarriages.

The first room of the exhibition introduces Schiele’s “breakthrough year”. He studied at the Academy of Fine Arts in Vienna, but left without graduating and soon abandoned a classically informed approach to the nude in favour of his own unique response. By 1910, the 20-year-old artist, having been mentored by Gustav Klimt, started to sacrifice anatomical accuracy in favour of a new, radically expressive style. Uncomfortably positioned, twisted bodies start to look painfully emaciated, limbs are truncated and a strange new palate sees sickly hues replace healthy skin tones. In a series of studies, in which Schiele may well have been his own model, the male figure is drawn from behind. The back is elongated and coloured with putrid pinks and greens. The vertebrae show through the skin in a manner that is disconcertingly reminiscent of a flayed carcass hanging in a butcher’s window. Even the newborn babies Schiele painted at Vienna University’s women’s clinic look withered and sickly. An almost featureless pregnant woman is coloured a gangrenous green. Another woman in black stockings seductively eyes the viewer, while an impossibly large, parasitic infant clings to her hip. This is Schiele’s comment on motherhood.

To the young Schiele, women were both fascinating and frightening. Clearly influenced by the drawings of Toulouse Lautrec, he drew his own sister, topless and sneering, her face smeared with an unhealthy green. Aside from Gerti, most of Schiele’s models were young “waifs and strays”, prostitutes and street urchins as well as friends and lovers. His drawings of women in the first half of his short career boldly and frankly explore sexuality and the erotic pull of the female body, which he observed with equal measures of fascination and fear. Most of all, he acknowledges the sexual power and agency of the women in front of him. “There’s a parity between [Schiele] and his models: it is all about a sort of sexual urgency on both sides,” explains Wright.

The frankness of Schiele’s desires becomes evident in the second room of this exhibition. In a striking drawing somewhat euphemistically titled Woman With Black Stockings (1913) Schiele limits his palette to red, the colour of danger and passion. The model, who is most likely Schiele’s lover Wally Neuzil, sits back and casually lifts her skirts to reveal her brightly coloured genitals. The drawing is realised like the articulation of a daydream, a private fantasy of the artist. The model looks away, apparently distracted by something else and unaware, or unfazed, by the fact that she is revealing herself.

The bohemian Wally was Schiele’s companion for four years, up until 1914, a point at which the artist started to reject his liberal lifestyle, a lifestyle that had got him in trouble with the authorities. Around this time he takes up with another, more bourgeois companion, Edith Harms, whom he marries in 1915. However, he is reluctant to let Wally go. Schiele tried to maintain a link with his former lover, presenting her with a quasi-legal document obliging the two of them to share an annual vacation. Wally, unsurprisingly, refuses the terms of this lovers’ contract and two never met again.1

By 1914 Schiele’s approach to life and art had begun to mature. “The more urgently expressive works of his earlier years gives way to something monumental and more sculptural,” Wright tells me. Schiele’s nudes become muscular and increasingly solid in part because he starts to use older models, instead of the young gamines who earned their livings on the streets of Vienna. The outbreak of war, and Schiele’s own duties as a subscripted soldier, may also have had an impact on his outlook. His paintings, however, still retain their erotic edge. Although his new wife was a bashful woman compared with the “free and easy” Wally, Schiele does convince her to pose for him half-dressed, as evidenced in Reclining Semi-Nude With Legs Spread, painted in 1916. This drawing, not unusually for Schiele, is signed as though he intended it to be viewed vertically. If viewed upright, Edith appears to defy gravity. She seems to float in a white void or to be leaping into the air in some balletic dance move. Just like the blank backgrounds characteristic of Schiele’s drawings from the outset, the directional ambiguity of his figures only serves to further isolate the model and unsettle the viewer.

Just as Schiele’s art matured and his career started to reach new levels of success, the artist and his pregnant wife contracted Spanish flu, dying within days of each other. Schiele was just 28. But his influence lives on and the nature of his work is, for many, as daring and shocking now as it was 100 years ago. His drawings continue to find a voice in the etchings of Tracey Emin and watercolours of Marlene Dumas, while the directness of Jenny Saville’s painting has led to an exhibition at the Kunsthaus in Zürich that combines her work with that of the Austrian artist’s [Egon Schiele – Jenny Saville,  until 25 January 2015]. It would be nearly impossible to stage a dull exhibition with Schiele’s name attached, but Egon Schiele: The Radical Nude provides a fascinating, and rare, insight into this most controversial of artists.

• See also: Studio Internationals’ review of The Nakeds at the Drawing Room London until  29 November. 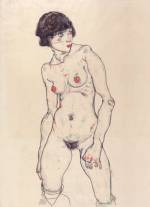 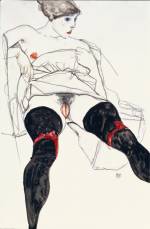 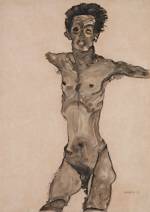 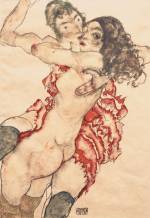 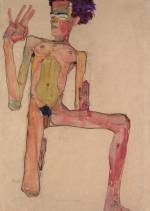 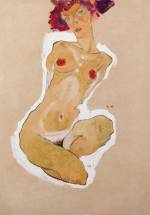