Japan’s contemporary art festival, the Echigo-Tsumari Art Triennale, despite being held in a region with just 74,000 residents, attracts more than 400,000 visitors, who come from around the world to experience artworks dotted over a vast area of land

This is the sixth Echigo Tsumari Art Triennale since its launch in 2000, and the 2015 edition encompasses nearly 380 artworks by 350 groups of artists from 35 countries and regions, including permanent installations and more than 180 works newly installed this year. Works are spread over 760 sq km (nearly half the size of London) of natural landscape in Tokamachi city and Tsunan town, which together form the area called Echigo-Tsumari, from which the triennale takes its name. The works, by both Japanese and international artists, are designed to relate to the local environment and culture, and are found at everyday sites, including derelict houses and abandoned schoolrooms. Different from land art such as that produced by Richard Long, the works in Echigo-Tsumari are more like artists’ attempts to unearth the history of the region and the memory of the locals.

Many artists have taken on the theme of local culture, interpreting it in their own way. Beside Doichi local train station, on the Iiyama line, is Kiss & Goodbye (2015), a train compartment-like installation that visitors can enter, by Taiwanese picture-book illustrator Jimmy Liao. Initially, Liao wrote and illustrated a picture book that told the tale of a boy who lost his parents in the devastating earthquake that hit northern Japan in 2011 and travels to live with his grandfather in Echigo-Tsumari. With this installation, Liao has brought his colourful tale to life. Entering the compartment, which is made to look like a train in a tunnel, visitors come across “the boy” kneeling on the front seats of the train, watching the scenery from the window, as he travels to his grandfather’s. Visitors become spectators of the boy’s journey, as well as sharing time and space with him. Just like the boy, anxious about arriving in a strange place, visitors will associate themselves with him and imagine life in this remote town.

Some artists share the family ties of the locals using derelict houses. Hong Kong ceramist Fiona Wong’s Gogasha (2015) is a body of white porcelain works installed in an empty house that stands in a rice field. Gogasha, which in Chinese culture means a house to watch millions of stars, was the name given to the house nearly 30 years ago by the man who built it. He wanted to leave the house to his son and he put many creative ideas to use in the small space, constructing his home so that he could read a book and gaze at the stars. Wong was attracted to the family story belonging to the house and wanted to interpret it through her ceramic works, making something that would become integral to the empty dwelling. She pierced holes in white porcelain and placed her works in the windows so that the light filters in through them during the day, and, at night, the moon and stars can dimly be perceived.

Japanese artist Seizo Tashima, who is famous for his children’s picture books, explored people’s memory of a derelict school. Through a dialogue with the older locals, the artist heard how the now empty school in Hachi, a village that these days has just 340 or so residents, used to be visible from every house in the village and the locals would watch their children study and play. Working with the fact that the school is a symbol of the village that brings back memories of the days when children still studied and played there, the artist turned the ghost school into a Museum of Picture Book Art, where the artist’s picture story of the last remaining children to attend the school came out from the book and gained real life in the empty school. Students, teachers and goats, made out of driftwood collected from the nearby seashore and colourfully painted, jump around, as if bringing back life once again to the ghost school in Hachi village.

French artist Annette Messager evokes the lives of women living in Tanokura, a village that now has fewer than 80 residents, in her Les spectres de la maison Tsunné (2015), which is on show in an abandoned thatched-roof house. Her stuffed soft sculptures, in the shape of scissors, nails and knives, recall the lives of women who spent long hours in the house, diligently sewing and cooking for the family, while the men did the farming work.

Korean artist Lee Bul’s numerous mirrors and the story of a former doctor’s house come together in her work Doctor’s House (2015). The only clinic in Kamo, a village of 120 people, opened when the locals pooled money to pay for the first doctor and to build the doctor’s house. Bul’s mirrors reflect both the memory of the clinic’s past and the contemporary visitors.

All these works are on show in an area surrounded by mountains, with terraced rice fields, where, in summer, the temperature can reach 37C, and, in winter, the houses can be under two metres of snow. It is unlike any art biennale that takes place in a city. Village people are elderly and remote from contemporary art. It wasn’t easy for the locals to accept such seemingly radical objects suddenly appearing in their rice fields or those of their neighbours. Yet without the help of the local people, the artists could not have made and installed their artworks in such an extreme environment. The Triennale is a magical event whose artworks become a magnet for visitors from around the globe, allowing them to strike up a relationship with people who live in one of the most marginal villages in Japan, and enlivening an area whose population has been shrinking. 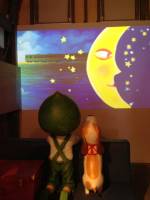 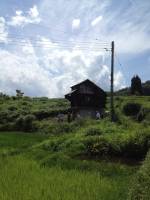 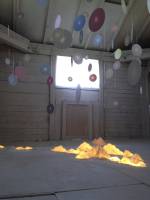 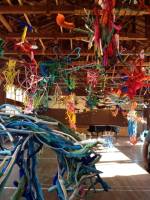