From Thomas Gainsborough and John Constable to Richard Long and Yinka Shonibare, what unites these artists and their works across the centuries is a shared concern with the relationship between our planet and its inhabitants 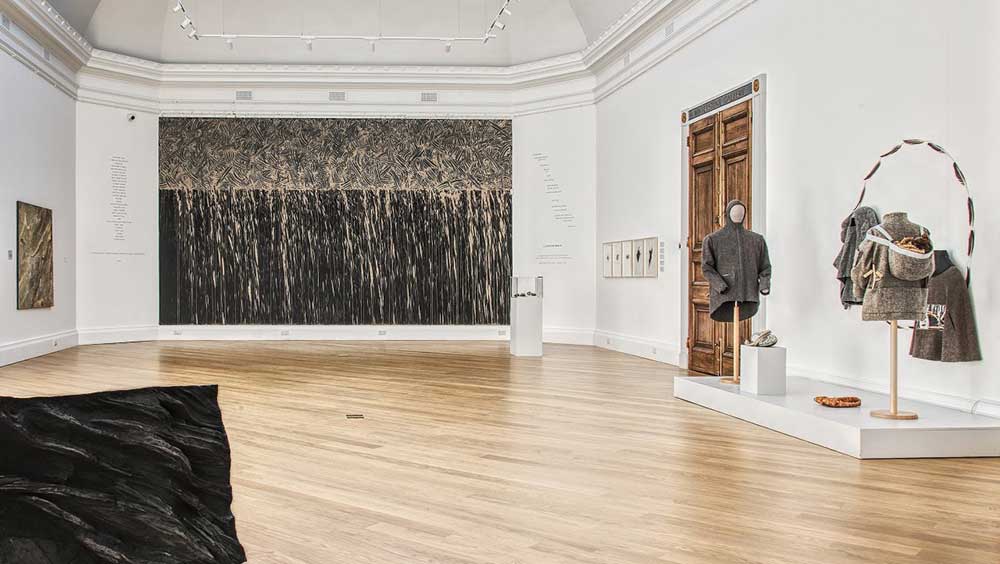 The earth beneath our feet has proved to be an inexhaustible source of inspiration for artists, who for centuries have responded to its diverse topography, majestic vistas, rich geology and, more recently, the damage inflicted on it by human activity. Spanning four centuries of art, this ambitious exhibition at the Royal West of England Academy (RWA) considers the many ways in which British artists past and present have represented our environment. The timely show is the final instalment of the RWA’s element-themed series, which, since 2014, has included exhibitions focusing on sea, air and fire. At a time when anxiety regarding the Earth’s future is at fever pitch, this feels like the most urgent of the four, a view ostensibly shared by the curators (Nathalie Levi, Christiana Payne and Emma Stibbon) who have foregrounded works addressing environmental breakdown and climate change. 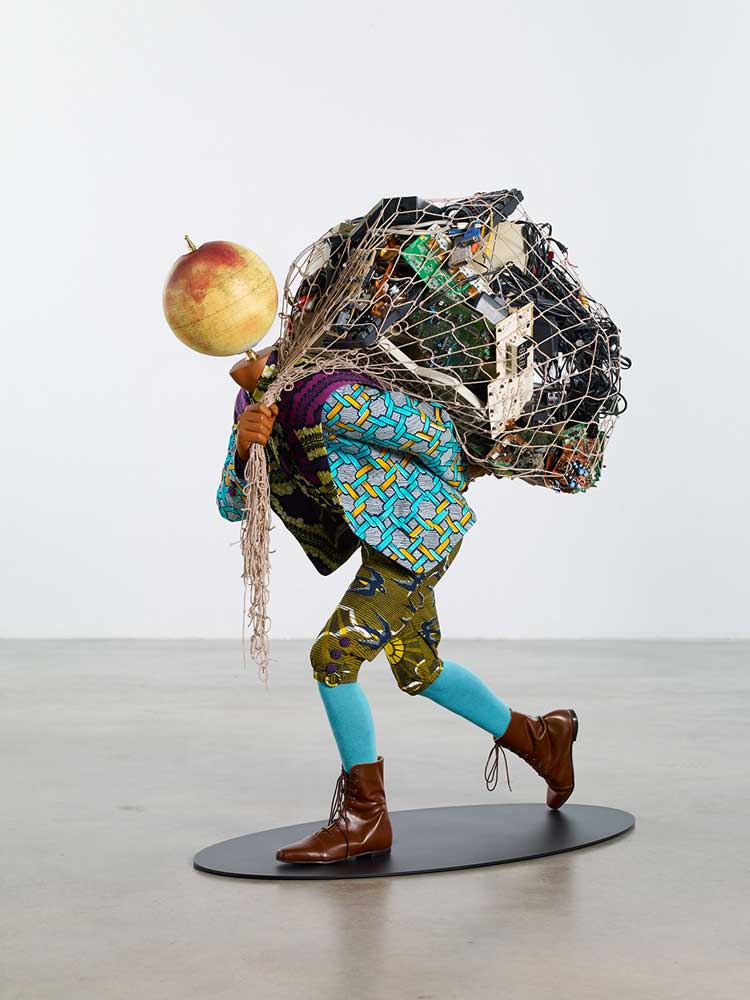 Greeting visitors in the first gallery is Yinka Shonibare’s Earth Kid (Boy) II (2022), a child-sized mannequin weighed down by a fishing net of waste electronics and whose head is a heat-map globe, showing areas of global warming. Dressed in the artist’s signature Indonesian-influenced Dutch batik fabrics, this is the latest in his Earth Kids series, highlighting links between the Industrial Revolution, colonial exploitation of Africa and environmental havoc. Described by Shonibare as “a symbol of action and agency”, the convoluted sculpture suggests that there is still time to shift current patterns of consumption to create a sustainable future for our planet. This optimism is not shared by Julian Perry’s disquieting paintings recording the devastating effects of coastal erosion. These surreal scenes, depicting caravans teetering on East Anglian clifftops and houses hanging in mid-air, speak to a world increasingly under threat from climate change. As Perry notes in the exhibition catalogue, since making these works in 2010, the amount of carbon dioxide in the atmosphere has risen by 8%. 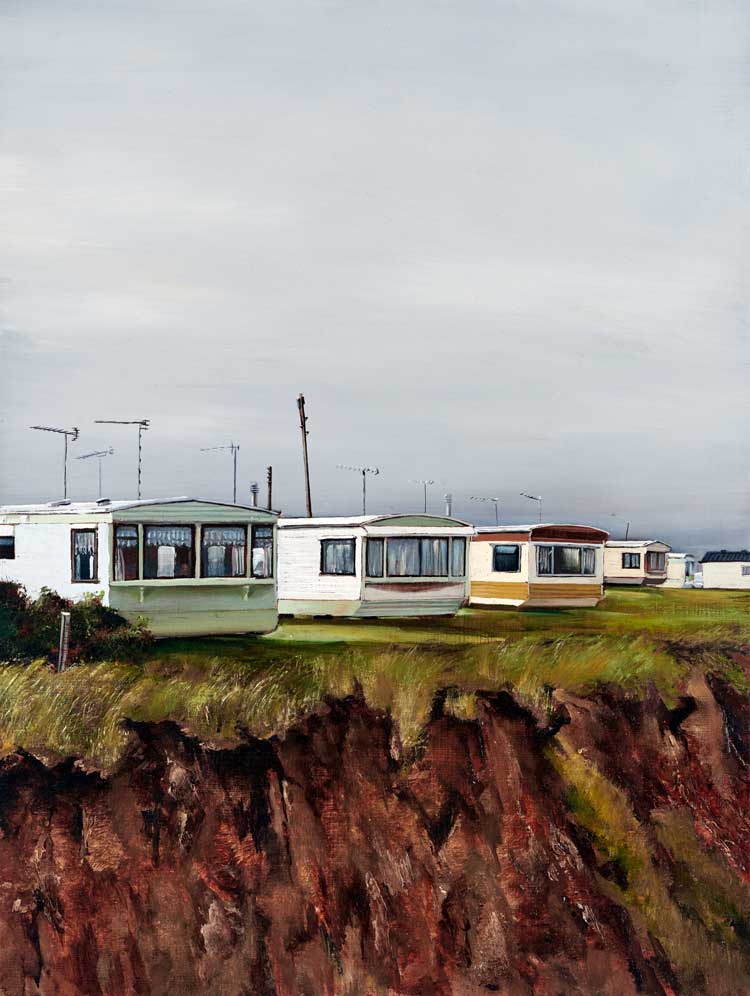 Many of the exhibition’s works reflect an interest in the destructive impact of human activity on the land. Carol Rhodes’s Factory Roof, Countryside (2002), for instance, exemplifies her aerial views of our industry-scarred landscape, while Edward Chell’s M2 Medway Services Eastbound (2013) depicts a peripheral landscape associated with environmental contaminants, yet is filled with an abundance of grasses and wildflowers, demonstrating nature’s surprising resilience. Elsewhere, Samuel John Lamorna Birch’s Morning Fills the Bowl (1926) captures the strong morning light in Lamorna Cove and quarry in Cornwall; framed by pinnacles of granite, the sun-soaked scene contrasts the cove’s natural beauty with the damage wreaked by industry. The Cornish light also inspired Laura Knight, whose outstanding watercolour Men Working in a China Clay Pit (1912) shows labourers in a vast crater near St Austell, an area known today as the “Cornish Alps” thanks to the mountainous spoil heaps that blight the landscape. 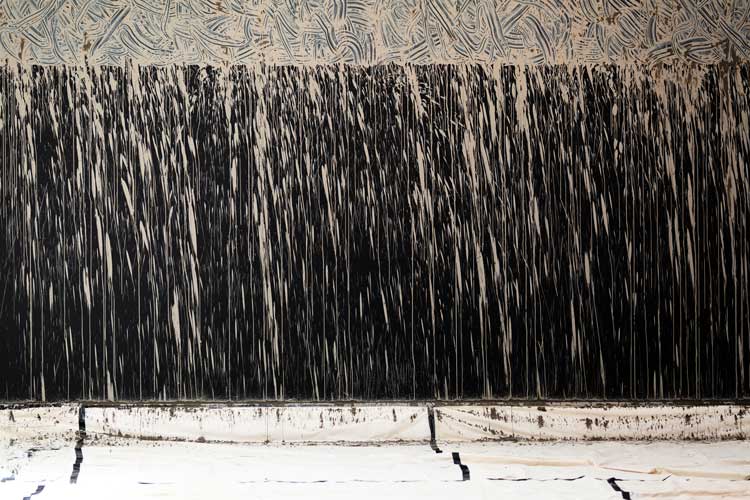 At the end of the airy, sunlit gallery is Richard Long’s Muddy Gravity (2022), a site-specific drawing in which mud from the nearby Severn Estuary is smeared and spattered across the wall. Long has been making drawings like this for years; in fact, it is almost identical to one he produced down the road at the Arnolfini for his solo show there in 2015. And yet, it is unique – an ephemeral record of an ephemeral act that at once evokes primeval cave art, current ecological concerns and painting’s long history of using earth pigments dug from the ground. Another artist getting up close and personal with the stuff of the earth is Michael Porter, whose Dirt series (2018-ongoing) carefully observes small clumps of tangled roots and earth. Abstracting the clods by isolating them on neutral white backgrounds, his sensitive gouaches gently challenge aesthetic hierarchies. 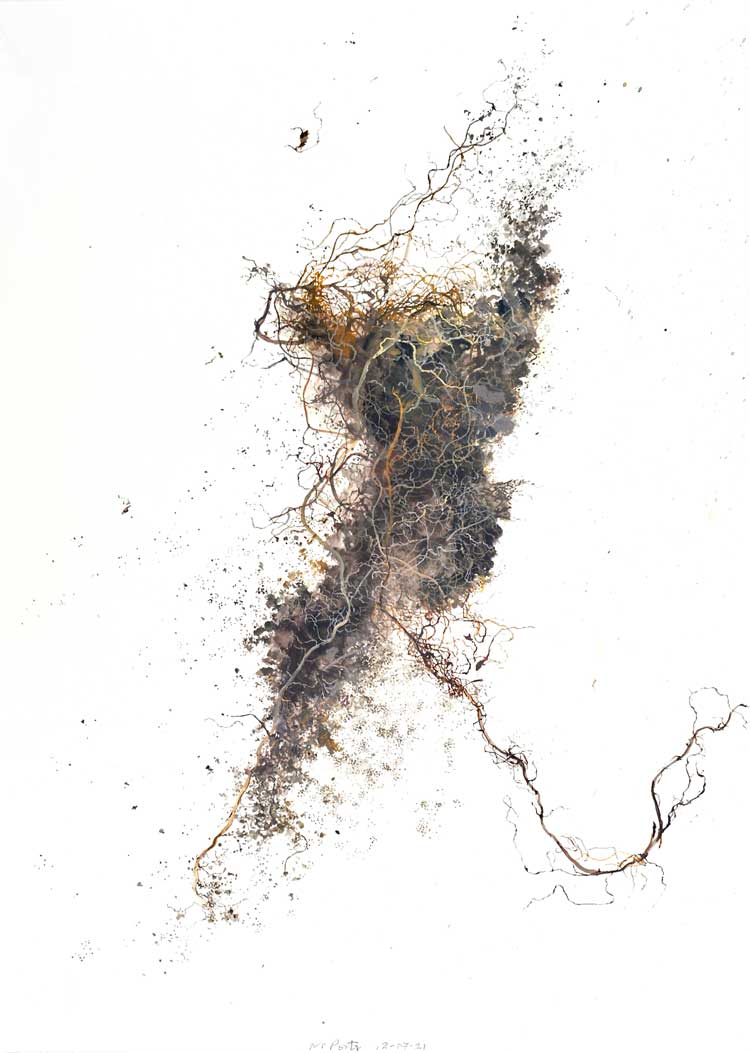 The mood in the second gallery is that of an entirely different exhibition, with subdued lighting, burgundy-coloured walls and gilt frames providing the setting for an outstanding selection of historical paintings. Highlights include Thomas Gainsborough’s large canvas Romantic Landscape with Sheep at a Spring (c1783), a bucolic scene in which shepherds rest with their flock amid towering rocks. Although the painting was partly inspired by visits to the West Country and Lake District, it is a studio invention. John Ruskin criticised its lack of naturalism, which was perhaps owing to Gainsborough’s use of models that included coal and broccoli. In this, there are resonances with other artifices, such as Tania Kovats’ Strike (2001), a crisp white plinth that has seemingly eroded to reveal a rocky, weather-beaten cliff face; and Abigail Lane’s Molehills (2016), which appear as mounds of earth on the floor, but are, in fact, painted bronzes. 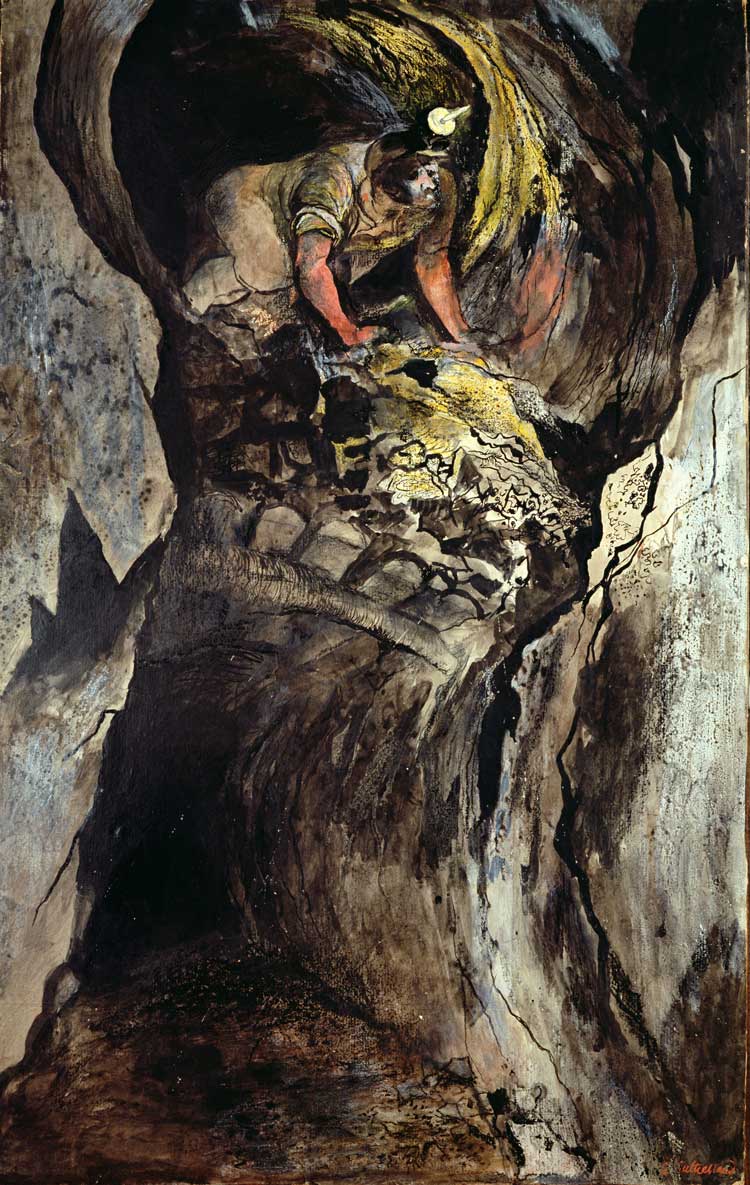 Sometimes the earth is portrayed as unstable and unpredictable, such as in Philip James de Loutherbourg’s An Avalanche in the Alps (1803), in which three figures and a dog watch on in horror as people are swept to their deaths by nature’s awesome power; or in Mary Buckland’s watercolour documenting the massive landslip that affected the cliffs between Axmouth and Lyme Regis in 1839. At other times, the land is presented as a source of sustenance and abundance, as with John Constable’s magnificent 1815 canvas capturing the view of his father’s kitchen garden as seen from his parent’s Suffolk home, or in JMW Turner’s Cassiobury Park: Reaping (c1807), which shows men and women harvesting in a riverside field. Although the scene conveys a sense of people in harmony with the landscape, it belies the realities of the Enclosure Acts, whereby common land was appropriated for private farmland, in this instance the estate of the 5th Earl of Essex, near Watford in Hertfordshire. 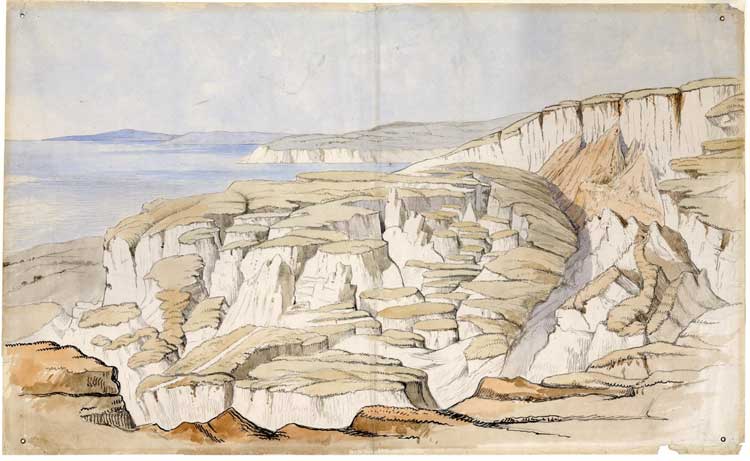 The exhibition is divided into nine subsections, which inform the curators’ thoughtful catalogue essays, but tend to fade into the background as the show unfolds. What truly binds these works together is a shared concern with the relationship between the Earth and its inhabitants, an understanding that our environment is shaped by human activity as much as by nature’s processes. The British landscape in particular is revealed as a complex site of innumerable cultures and histories, moulded over centuries by shepherds, farmers, builders, foresters, landowners and engineers; the product of thousands of different actions and decisions. These artists show us the Earth, but also hold a mirror to the unfolding human story, which continues to impact our vulnerable environment, whether for good or otherwise.